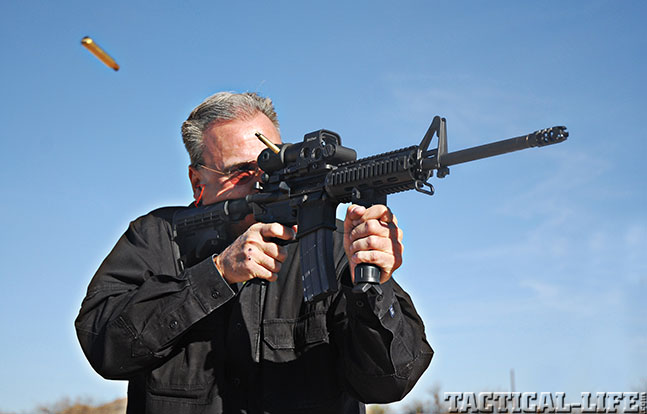 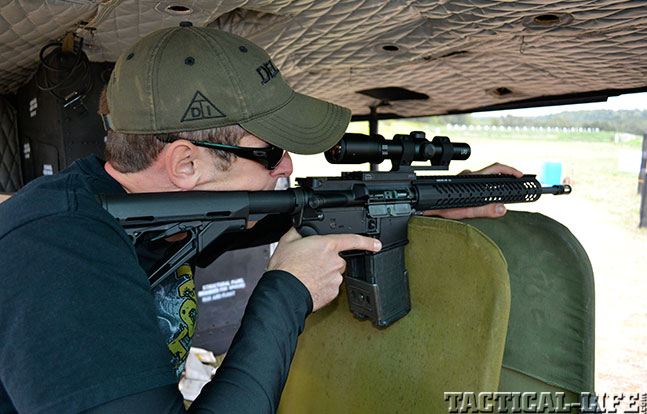 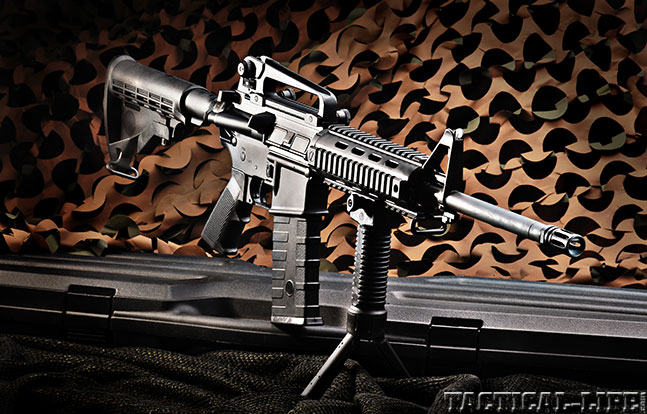 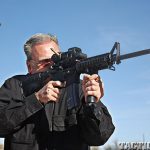 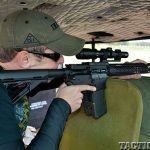 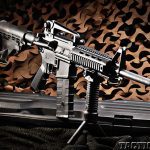 Today’s shooters are blessed with a plethora of sources for quality firearms.

Gone are the days when 1911s and ARs, for instance, were available from only one or two sources. Over the last few decades, a number of companies have risen to correct that, and for the most part it has been a good thing. Not everyone understands that as modular as the AR is, using better parts produces better rifles.

One company that understands that well is Del-Ton, Inc. About 14 years ago, Del-Ton started out as an online purveyor of AR parts, then blossomed into selling parts and complete uppers before eventually adding completed rifles to its list of capabilities. I reviewed and bought one of their earlier efforts, finding it an excellent rendition.

Perhaps the time Tony Autry, president and CEO of Del-Ton, spent assembling uppers during the early days of Del-Ton gave him insight into the value of good parts. Whatever the impetus, Del-Ton rifle components are made in the U.S and all rifles are built in Elizabethtown, North Carolina. If that is not enough, they have a lifetime warranty for the original purchaser that covers all the company’s complete rifles.

One thing I like about the rifles from Del-Ton is the flexibility to specify their final configuration. Its offerings include a number of stock rifles that are quite shootable as they are, but that can be customized to whatever degree the purchaser wants. If the customer just wants parts to upgrade their personal AR or needs to slap a new upper on it, Del-Ton is ready to assist.

Because they are not willing to sit still, if you wait a while, Del-Ton will come out with a new crop of offerings. Let’s take a look at three of Del-Ton’s newer rifles: the Sport, Echo and Evolution models.

The Sport, Echo and Evolution rifles have a number of similarities, along with several differences. All have 16-inch barrels finished with manganese phosphate, even under the front sight base (or, in the case of the Evolution, under the low profile gas block), 5.56mm NATO chambers and 1-in-9-inch twist rates, with threaded muzzles capped by A2 flash suppressors. The uppers and lower receivers are mil-spec designs made from forged 7075-T6 aluminum that has been hardcoat anodized. The uppers are also all A3 flattops with white “T” marks.

In the bolt and carrier area, everything is mil-spec, with a manganese-phosphate-treated 8620 steel carrier assembly. The Carpenter 158 bolt is HPT/MPI tested, heat-treated and plated, and shot-peened. All have a chrome-lined carrier and a chrome-lined interior carrier attached with Grade 8 screws along with a correctly staked and sealed gas key. Each rifle also includes a forward assist and dust cover.

A quick comment about the barrel twist used on these models (1-in-9 inches). Many describe that twist rate as unsatisfactory because it does not stabilize the heavier bullets as well as other twist rates. In most instances, the importance of this is vastly overrated. The average AR shooter will shoot loads utilizing 55-grain bullets almost exclusively during his or her shooting career. They are cheaper than any load containing heavier bullets, and cheaper means more practice.

As we take a closer look at these three Del-Ton ARs, remember all the shared/common factors that were
previously discussed.

Del-Ton describes the DT Sport as “an affordable introduction to the platform for anyone seeking a reasonably priced rifle with many quality features.” An understated, if accurate, description for a rifle with many desirable features.

The Sport is an A3 carbine using a carbine-length gas system and has an A2 front sight base mounted to the lightweight barrel using tapered pins. Surrounding the 4140 steel barrel is a set of black CAR handguards with single heat shields and an aluminum delta ring assembly. The M4-style, fiber-reinforced, six-position buttstock rides a commercial receiver tube, and a black A2 pistol grip rides the lower receiver. One 30-round magazine and a gun lock complete the package.

Weighing in at 5.8 pounds, thanks to the lightweight A3 configuration, the Sport is light enough to carry for extended periods quite comfortably and compact enough for close-quarters combat. The DT Sport is also available without a front sight in what Del-Ton calls an “optics-ready” configuration.

Priced at $707, the Sport is really a good buy. It is certainly “an affordable introduction” to ARs! In fact, it would be a good carbine for more experienced AR users who have a penchant for an excellent rendition of the A3 carbine.

Next up is the DTI Echo 316/MOE. The “MOE” in the descriptions means the furniture is from Magpul’s line of Magpul Original Equipment, an enhancement on mil-spec furniture. Del-Ton offers the 316/MOE in black, olive drab green, and Flat Dark Earth. The polymer buttstock, pistol grip, handguard and triggerguard are all MOE parts. Magpul’s handguard is made from heat-resistant polymer, to protect the user’s hands.

The 316/MOE is based on an A3 carbine and has a carbine gas system. The heavy profile barrel is made from chrome-moly vanadium, has an aluminum delta ring assembly and includes M4 feed ramps. The front sight base is an F-marked type and the receiver extension is mil-spec.

With all of this, the 316/MOE still weighs in at a relatively light 6.8 pounds, retaining the compactness a collapsible stock can bring. The 316/MOE also comes with one 30-round PMAG and a gun lock.

The cost of the Echo 316/MOE carbine in all colors is $858, which strikes me as a bargain. I’m not a big fan of mil-spec furniture, so the MOE items are welcome additions to the design. 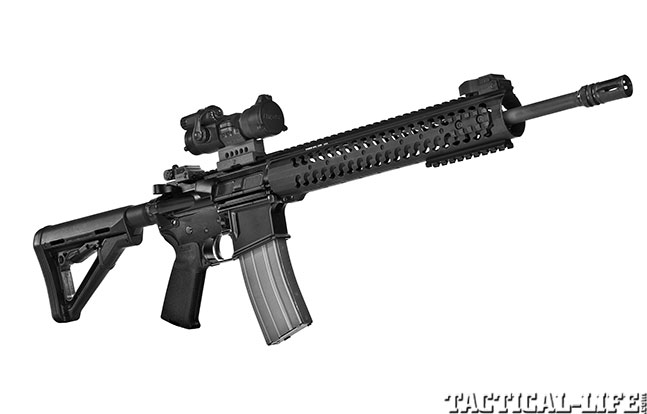 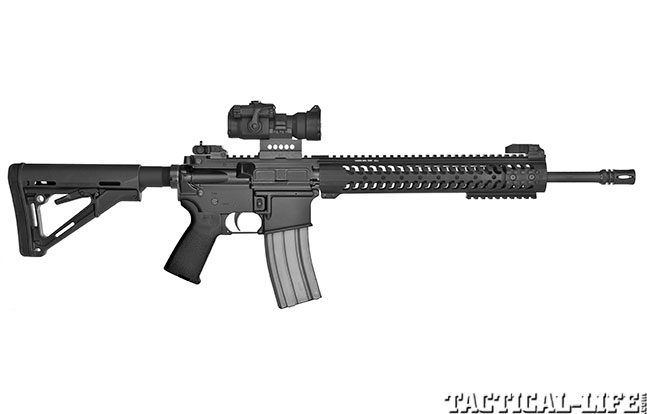 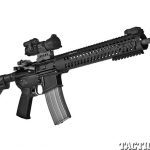 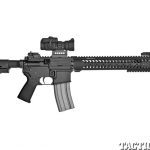 Several products from Samson Manufacturing are used in the Evolution. In fact, the name of this carbine is derived from the handguard, the Samson Evolution 12.37-inch Free Float Rail. This handguard is built of hard-coated 6010-T6 aluminum alloy and incorporates an integral full-length top rail. In order to add extra accessories, two 2-inch pieces of rail and one 4-inch piece of rail appear on the sides and bottom of the handguard.

Other Samson products include the low mount gas block, Quick Flip Dual Aperture Rear Sight and the company’s Folding Front Sight. Magpul parts include an MOE pistol grip and a CTR buttstock. The CTR is mounted on a mil-spec receiver extension. Inside the receiver extension Del-Ton includes a H-Buffer.

The Evolution’s chrome-moly vanadium barrel has chrome lining and a mid-length gas system. The barrel also has M4 feed ramps and a lightweight profile. Del-Ton chose a two-stage trigger for the Evolution, the type many folks prefer on their ARs.

One magazine and a gun lock are shipped with the Evolution. While it’s the priciest of the three carbines examined at $1,299, the added extras certainly seem worth the price.

Del-Ton’s Sport, Echo 316/MOE and Evolution carbines are just the tip of the iceberg. If none of these carbines strike your fancy, check out the Del-Ton website. They have plenty of options available, and, of course, you can have one custom built. Regardless of your choice, it will have Del-Ton’s quality and experience built in! 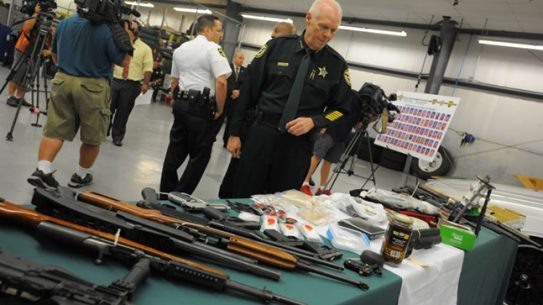 A total of 74 people face charges after drugs, guns, vehicles and cash were...