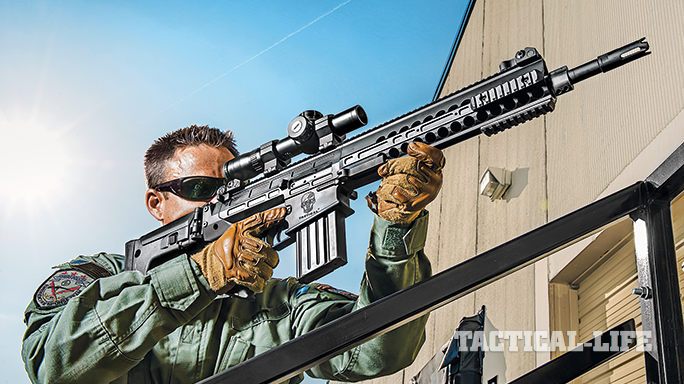 1 of 4
Gun Review: DRD Tactical’s Paratus Gen 2
Given its design and primary tasking as a precision rifle, the DRD Tactical Paratus’ accuracy is the most important factor, and it delivered. Shown here with a Bushnell scope. 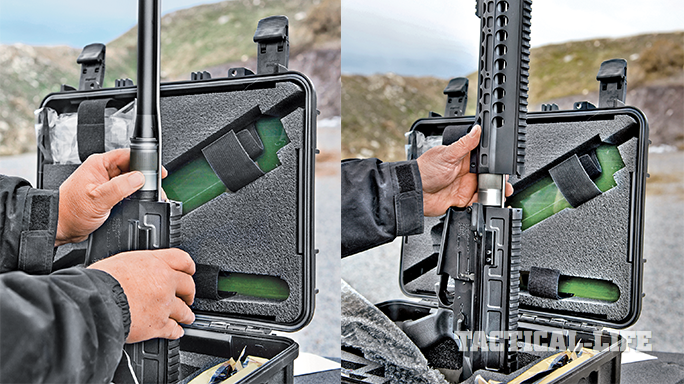 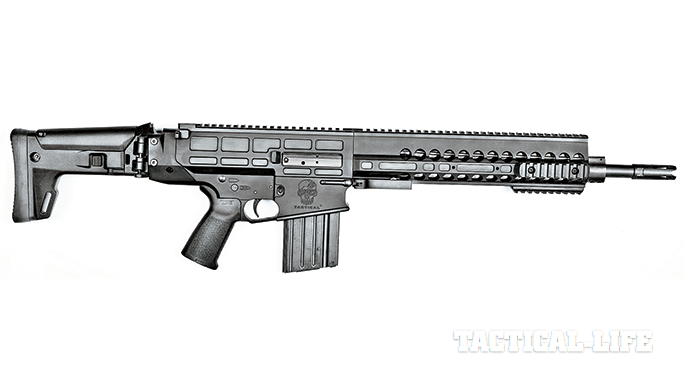 3 of 4
Gun Review: DRD Tactical’s Paratus Gen 2
Breaking down into three basic parts, it fits nicely into 18-by-14-by-7-inch hard case, backpack or even an attaché case. 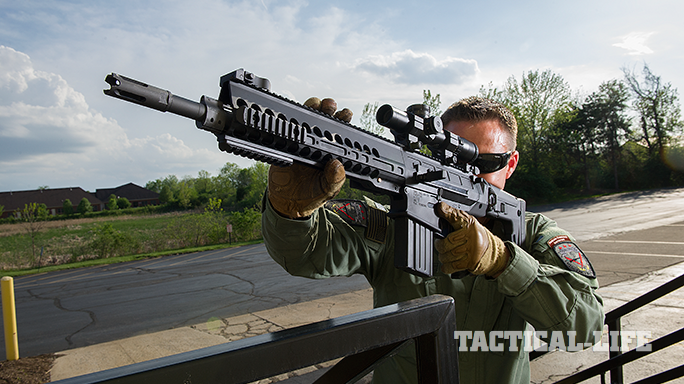 4 of 4
Gun Review: DRD Tactical’s Paratus Gen 2
Given its design and primary tasking as a precision rifle, the Paratus’ accuracy is the most important factor, and it delivered. 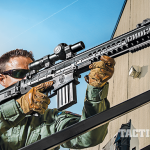 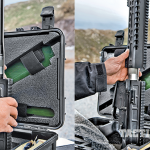 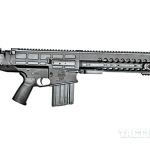 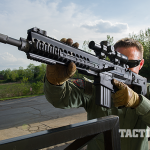 One is to use a bag that looks less “tactical.” This can be effective, but depending on the rifle, there are only so many ways you can disguise it. Having done so several times on SWAT deployments, it takes some real thought. Folding stocks and shorter barrels help, but this method is less than ideal. Takedown or break-down rifles are the second, and often the most efficient, option. You can certainly take your standard rifle apart, but it just seems to work better if the weapon was designed from the ground up for that purpose. One example is the Paratus from DRD Tactical. Designed from the start as a break-down rifle for a government contract, it is now available to law enforcement and the general public.

DRD Tactical bills itself as “tool makers for clandestine missions,” and its products clearly meet this description. The company’s CDR rifles in 5.56mm and 300 Blackout can be quickly taken apart and fitted into a hard case, briefcase or other pack. These rifles have proven reliable, lightweight and effective. Broken down, they fit nicely into a Pelican case. DRD Tactical also makes a couple of 7.62mm rifles with some interesting touches. The G762 not only breaks down, but it also uses HK91/G3 magazines. Using a standard buffer system, the M762 breaks down the same as the CDR rifles. But it’s the new Paratus Gen 2 in 7.62mm that’ll get your heart pumping. Fitting into an 18-by-14-by-7-inch case, it really speaks to your inner Jason Bourne.

Developed for the Joint Special Operations Command (JSOC) Concealable Sniper Rifle (CSR) open announcement, the Paratus is a purpose-built suitcase rifle. Breaking down into three basic parts, it fits nicely into 18-by-14-by-7-inch hard case, backpack or even an attaché case. In an effort to keep it more compact, the upper and lower receivers have been designed to use a patented internal recoil system, eliminating the buffer tube system. Removing this component allows DRD to use a folding stock, saving several inches of storage space. Adjustable for length of pull and cheek height, this Magpul folding stock makes for a quick and secure fit whether using iron sights or optics.

The Paratus Gen 2 features an excellent Geissele two-stage trigger. A non-reciprocating, left-side-mounted charging handle provides for smooth and quiet charging. Well suited to prone shooting, the charging handle allows you to operate the rifle without losing your cheekweld. Standard SR-25-pattern magazines can be used, and the lower receiver’s controls—the safety, magazine release and safety selector—are in standard AR positions.

The upper receiver includes a patented bolt carrier. Takedown is simple, making cleaning easy whether on the bench or in the field. The entire carrier and bolt are boron carbide coated for smooth operation and trouble-free operation in adverse conditions.

DRD Tactical’s barrel assembly consists of the barrel, the gas block and tube, and a barrel nut that locks the assembly into the receiver. Available in either 16- or 18-inch lengths, the hammer-forged, chrome-lined barrel features a 1-in-12-inch twist rate and a 7.62mm NATO chamber. The barrel comes with a standard A2-style flash suppressor, and the muzzle has 5/8×25 threading, so it will accommodate other muzzle devices, including sound suppressors. Knurling on the large barrel nut allows for a tight fit without using tools. If necessary, a barrel nut wrench is provided.

Covering the barrel is a proprietary handguard that locks onto the barrel nut using a pushpin and friction lock. This keeps it in place, yet the barrel remains free-floating. The handguard’s top rail mates up with the upper receiver’s for one continuous rail for mounting optics, while smaller rails can be added along the forend to accommodate bipods, lights, lasers or other accessories. The entire rifle is hardcoat anodized black, and nickel-boron is available as an optional finish. The Paratus Gen 2 ships in a rugged hard case with two magazines, safety glasses and all the usual instructions and manuals.

The case that is supplied with the Paratus has plenty of room to include a suppressor. In fact, my GemTech Sandstorm fit perfectly in a provided cutout. With some rearranging you could easily get a small scope in there, too.

For testing, I used a Bushnell Elite Tactical SMRS 1-8.5x24mm scope in an Alamo Four Star mount. This mount has proven incredibly solid and returns to zero very well. This magnification range is perfect for most police operations and remains compact and lightweight. I also tested the Paratus with my EOTech EXPS3 holographic weapon sight. For prone shooting, I added a Long Range Accuracy (LRA) tactical bipod. This design cradles the rifle for an incredibly stable platform.

Given its design and primary tasking as a precision rifle, the Paratus’ accuracy is the most important factor, and it delivered. Even with the 1-in-12-inch twist rate, it really liked the 175-grain bullets, but every group measured less than 0.75 inches, with the best group (produced by Silver State Armory’s 175-grain OTM) measuring 0.6 inches at 100 yards. Groups were completed from prone on my Eagle Industries shooting mat using the LRA bipod and a rear bag. Every group was at or under an inch, even with some practice ammunition. There is no doubt that this rifle is accurate.

Even more critical to accuracy in the field is the rifle’s ability to hold a solid cold bore. You need to be certain of where your first shot is going—how it groups after that is gravy. Well-built rifles will exhibit some variation, but adding the complexity of a removable barrel has an effect. Over the course of five range sessions with the Paratus, I fired a cold-bore shot each time. For added realism, each time I assembled the rifle, added the scope and fired a cold bore at 100 yards into the same target, resulting in an aggregate group that measured 1.17 inches. Similar rifles have grouped closer to 2 inches, with a few much wider. This test not only recreates a real-world cold bore, but it is also an indication that changing the barrel does not seem to shift impacts much.

My next test was designed to make certain the rifle held its zero with a barrel change. With the scope and bipod remaining in place, I fired three shots. Then I removed and replaced the barrel and fired three more shots. Typically, if the accuracy holds true under these conditions, it will do so under any real-world instance, and the Paratus did just fine. Firing 15 shots in total with practice ammunition, they were all inside 2 inches.

Once you deploy as a marksman with a suppressor it is pretty hard to go back, so I tested the Paratus with two of them. The first was my Gemtech Sandstorm, a thread-on suppressor designed for precision rifle work that is incredibly light. It had no affect on accuracy, nor was there any appreciable change in point of impact. If fired slowly, it worked fine; rapid fire resulted in some failures to extract. This is not uncommon on direct-impingement 7.62mms, especially with suppressors designed to be really quiet like this one. If you are going to use a similar can, you are going to need an adjustable gas block to deal with over-gassing.

The Paratus worked quite a bit better with the SureFire SOCOM762-MINI suppressor installed. This can has much less restriction and is quite a bit louder, but there was no impact shift. The SOCOM762-MINI is also quite a bit shorter and compact—a nice match for the covert nature of the Paratus.

When all was said and done, I tested the Paratus using 20-round Magpul Gen 2 and Gen 3 PMAGs, DPMS magazines and even a couple from LaRue Tactical. This rifle seemed to favor the metal magazines, with the bolt failing to lock open on empty PMAGs a couple of times. This did not occur with any of the metal magazines, and the Paratus really liked the LaRues. In fairness, this is not uncommon with 7.62mm PMAGs; in my experience, they are a bit more rifle-dependent than their 5.56mm brethren.

Given its ability to easily accept night vision and any number of scopes, it is perfect for those hunting or tactical situations that require more stealth than usual. Either way, it is plenty accurate, incredibly versatile and a blast to shoot! For more information, visit drdtactical.com.

This article was published in the 2015 Gun Buyer’s Guide. To subscribe, please visit PersonalDefenseWorld.com/subscribe. 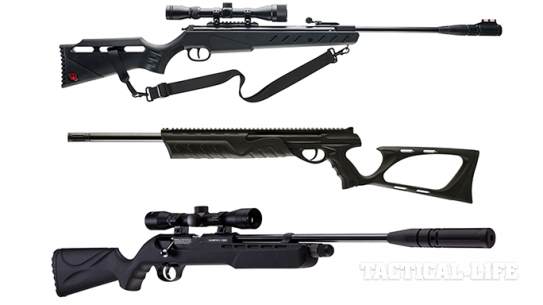 Looking to take a break from your normal heavy duty arsenal? Try one of...