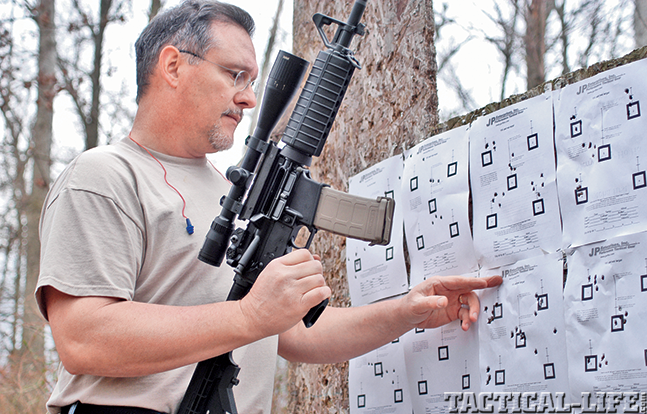 1 of 5
Gun Review: Extreme Duty Del-Ton 5.56
From its buttstock to its A2 flash suppressor, the 5.56mm Extreme Duty carbine from Del-Ton offers today’s shooters an M4-style carbine that takes “mil-spec” to the next level of quality for top-notch reliability. 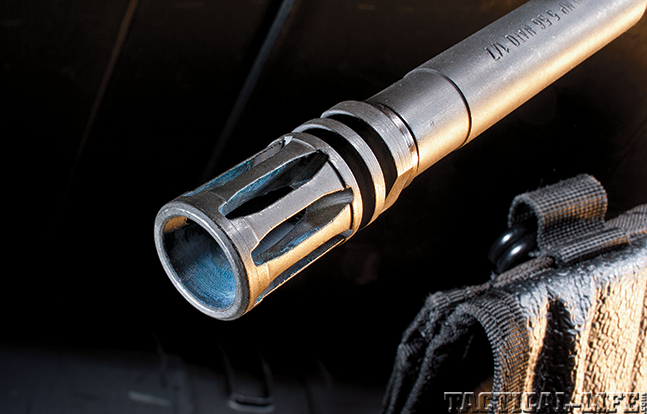 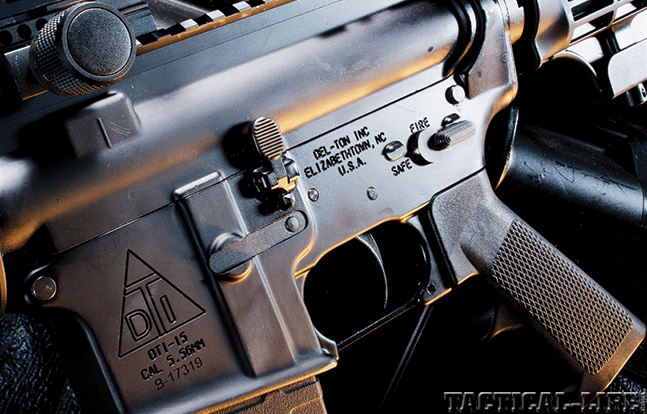 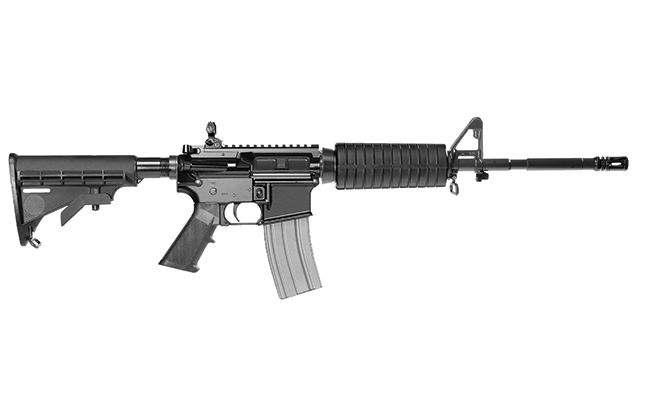 4 of 5
Gun Review: Extreme Duty Del-Ton 5.56
It’s hard to beat the fast-handling Extreme Duty carbine when it comes to light weight and maneuverability, whether on the range or in the woods. 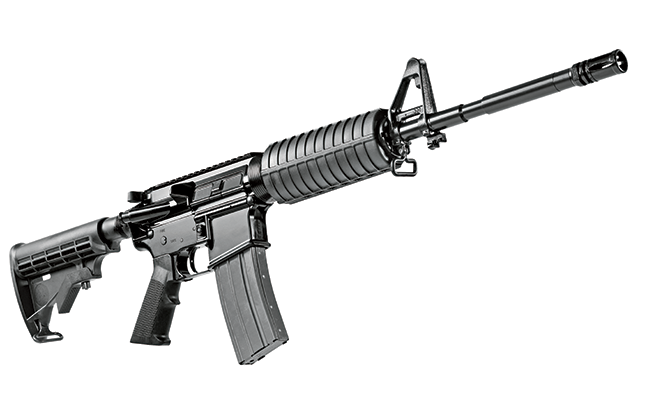 5 of 5
Gun Review: Extreme Duty Del-Ton 5.56
From its buttstock to its A2 flash suppressor, the 5.56mm Extreme Duty carbine from Del-Ton offers today’s shooters an M4-style carbine that takes “mil-spec” to the next level of quality for top-notch reliability. 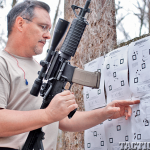 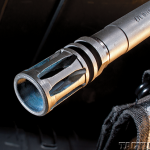 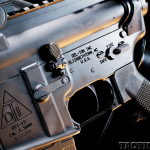 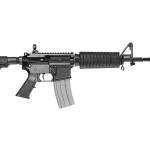 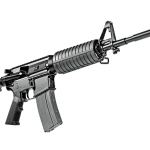 About an hour south  of Fort Bragg lies Elizabethtown, N.C., home to one Del-Ton Incorporated, one of the industry’s up-and-coming firearms builders. Del-Ton got its start selling parts and accessories. Today, the company has expanded into selling complete rigs, and I recently got the chance to run the DTI Extreme Duty carbine and put it through its paces to get a taste of what Del-Ton has to offer.

Del-Ton began with an enthusiasm for all things AR-15, starting out as a one-stop, online source for quality custom rifle kits, parts, upgrades, optics and accessories. “We got our start selling parts on eBay,” Tony Autry, the owner and CEO of Del-Ton, said. “We’ve always been firearms enthusiasts, so we decided to finance our hobby.” Starting in a garage in 2000, Del-Ton quickly outgrew its space and moved into a 5,000-square-foot building. Today, the company has grown its manufacturing and warehouse space to a nearly 26,000-square-foot facility to house its 28 employees.

“As the business grew, so did our customers’ demand for a more comprehensive product line,” Autry said. Del-Ton expanded further to offer a complete line of AR-15-style modern sporting rifles, both off-the-shelf and customer designed. “Our company is built on its responsiveness to customers, and 100-percent customer satisfaction remains our goal,” Autry added. “We stand behind our rifles with a lifetime warranty to the original purchaser.”

The barrel on the DTI Extreme Duty is made by FNH USA at its factory in Columbia, S.C. The barrels are cold-hammer forges from chrome-moly-vanadium steel. This is the military contractor that builds the M249 SAW and M240. To extend the barrel’s life, it is then chrome lined to add extra strength and corrosion resistance. To assure Del-Ton that the barrel doesn’t have any hidden defects, the barrel is magnetic-particle (MP) inspected. This is similar to the proof testing that engine blocks undergo to reveal any hidden flaws before a build. Once that process is completed, the barrel undergoes further testing with high-pressure (HP) test ammunition.

“Designated as a lightweight LE patrol carbine, the DTI Extreme Duty was designed to meet the needs of law enforcement officers.”

“The Extreme Duty is in keeping with the trend of what a certain group of people want,” Autry said. “We saw the mil-spec package grow in popularity. Everything is mil-spec instead of what you see on the commercial side. It was what the law enforcement community wanted. We saw a demand for what they wanted in regards to certain specifications. There’s a higher demand for hammer-forged barrels. With hammer-forged barrels, the molecular structure is tighter and seem to last longer.”

Chambered for the 5.56mm NATO, the barrel is 16 inches long and has the familiar A4-style contour. M4 feed ramps are also milled into the barrel extension area to facilitate reliable loading with a wide range of ammunition. Preferring bullet weights of 55 grains and up, the barrel’s fast 1-in-7-inch twist rate excels at stabilizing long, heavy bullets. To ward off rust and corrosion, the barrel is manganese phosphated, and Del-Ton applies this proven finish everywhere, even under the front sight base. Oftentimes, cut-rate ARs are missing phosphating beneath the front sight base to cut costs. The problem is that this area is subjected to burning powder gas and carbon fouling, which will attract moisture and rust over time. Sticking with a mil-spec build, the front sight base is “F”-marked and affixed with taper pins. The muzzle features 1/2×28 threading, and an A2-syle flash suppressor comes attached.

The bolt carrier assembly is made from mil-spec 8620 steel that is phosphated for corrosion resistance. Also mil-spec, the MP/HP-tested Carpenter 158 steel bolt is heat treated and chrome plated internally. Special attention is given to properly staking and sealing the gas key.

The handguard is a carbine-length M4 type with an aluminum delta ring. Double heat shields protect your hands from excessive barrel heat. The flattop upper receiver is forged from 7075-T6 aluminum and hardcoat anodized. The upper receiver’s anodized surface is coated with a dry film lube to raise its lubricity. Supplied with the DTI Extreme Duty carbine is a Samson folding rear sight with 200- and 600-meter apertures.

Viewing the Extreme Duty carbine from a budget-conscious standpoint, the design is geared toward versatility. The way law enforcement agencies save money is by specifying a flattop rail without a carry handle. The same goes for recreational shooters. They’re probably going to mount an optic, and they don’t need the added expense. The extra $100 that would be spent on a carry handle could be put toward an optic.

Designated as a lightweight LE patrol carbine, the DTI Extreme Duty was designed to meet the needs of law enforcement officers. The barrel’s 1-in-7-inch twist rate will easily stabilize bullets ranging in weight from 55 to 90 grains. To wring out the rifle’s accuracy, I mounted a Trijicon AccuPoint 5-20X mil-dot scope and fired five-shot groups at 100 yards from a solid bench. The trigger on this rifle is a single-stage unit with a 7-pound pull weight.

I tested the rifle with four factory loads and two handloads. Black Hills’ 75-grain Match ammo averaged 2,513 fps according to my chronograph. The smallest five-shot group with this load measured 1.59 inches, and the average opened up to 1.77 inches. Black Hills’ 60-grain V-MAX averaged 2,774 fps, and the smallest five-shot group measured 1.97 inches, while the average was 2.09 inches.

The first handload I tested is one of my run-of-the-mill plinking loads in .223. It consisted of a 55-grain Hornady spitzer, 23 grains of AA2230, a Federal small rifle primer and Lake City brass. This rifle didn’t prefer this load all that well, producing an average five-shot group of 2.25 inches, with a velocity of 2,861 fps. The smallest five-shot group with this load was 1.69 inches.

My second handload consisted of a 70-grain Berger VLD over 22 grains of AA2230 ignited by a Federal magnum small rifle primer. The average velocity was 2,486 fps. It produced a 1.6-inch average, while the smallest group measured 1.13 inches.

After accuracy testing was completed, I replaced the scope with a Trijicon 4X ACOG. I ran through ten 30-round magazines, shooting at several 10-Twist reactive steel targets. Del-Ton’s Extreme Duty carbine performed without a single malfunction and handled well while I ran through several drills.

Impressed by its performance, I asked Autry about the company’s own testing of the Extreme Duty. “We’ve run 7,000 rounds through it and have found no issues. It’s built to mil-spec or exceeds it. No corners were cut—it’s a solid, dependable rifle that won’t let you down.” 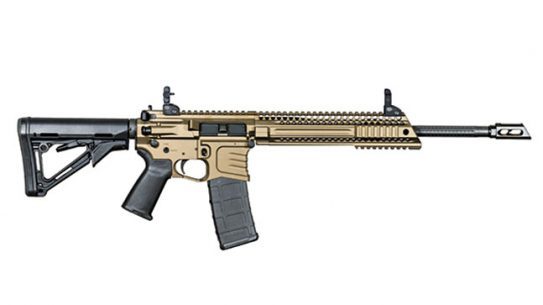 The Model 57 from Yankee Hill Machine is a billet-crafted carbine streamlined for speed,...