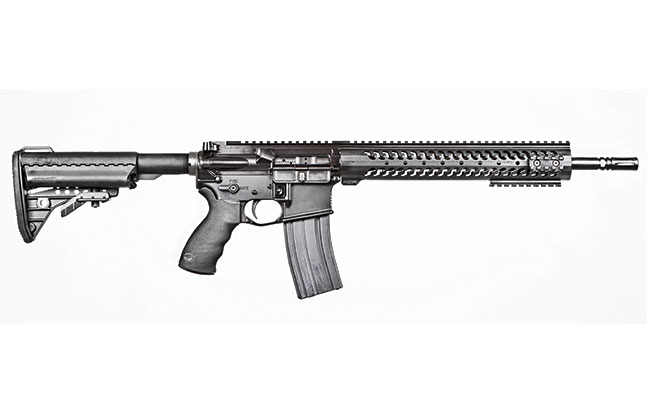 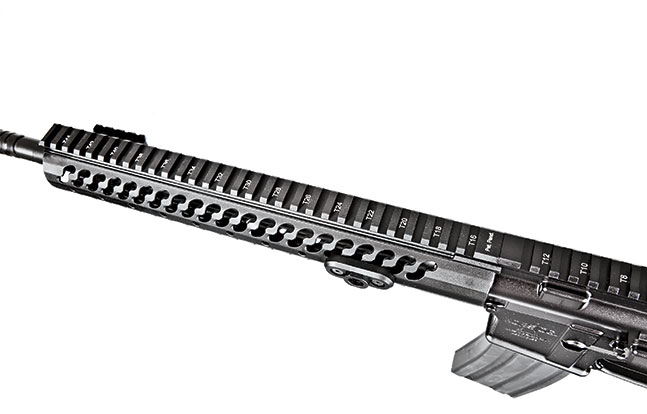 2 of 7
Gun Review: Korstog Var 5.56mm
The Var’s 14.5-inch barrel is topped off with an integral A2-style muzzle brake/flash suppressor, which has a reduced radius to allow for easier removal of the low-profile gas block. 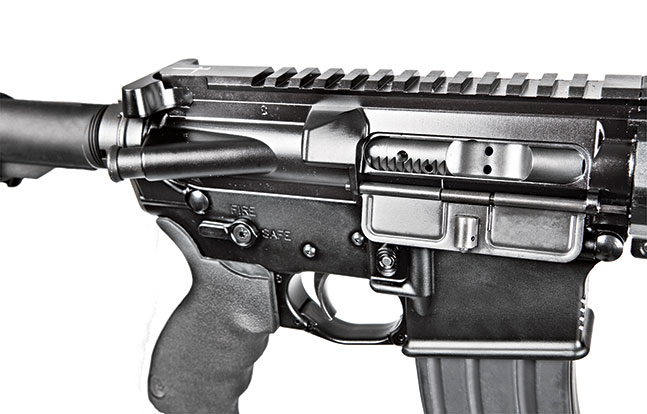 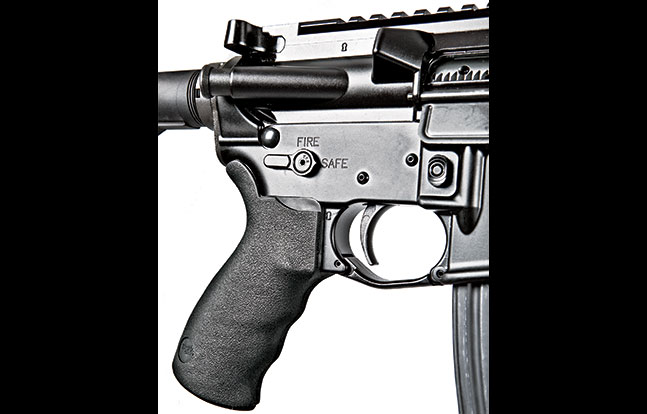 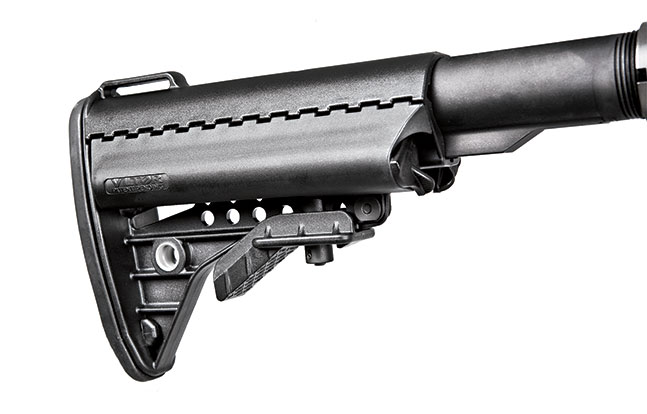 5 of 7
Gun Review: Korstog Var 5.56mm
The mil-spec receiver extension is fitted out with a Vltor IMod collapsible buttstock. It features waterproof battery storage compartments as well as a rubber buttpad and strike plate. 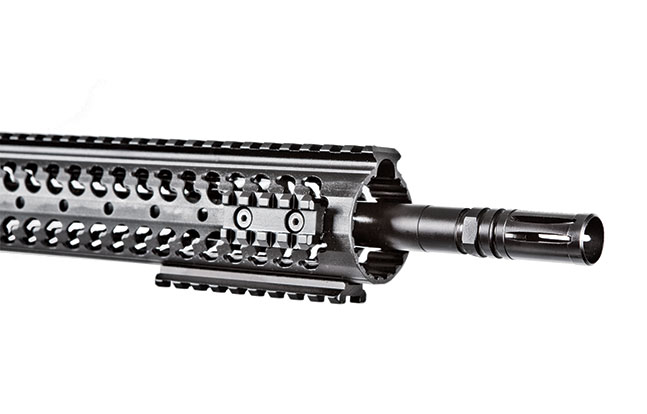 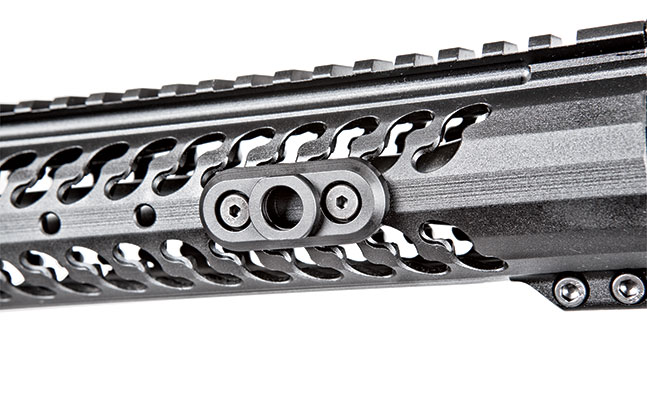 7 of 7
Gun Review: Korstog Var 5.56mm
The Samson Evolution forend is smooth sided, and it accepts rail strips and accessories such as this quick-detach sling point. 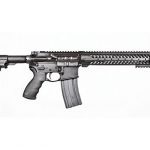 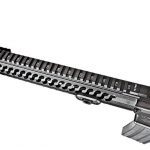 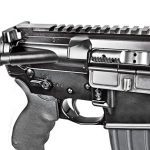 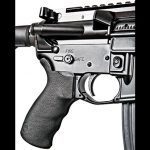 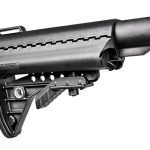 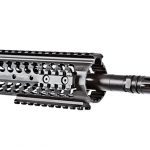 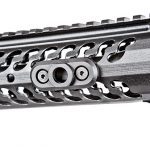 With the AR market being so saturated by makers and offerings these days, it can be a little tough to stand out from the crowd. As the market has matured, many manufacturers have strived to accomplish this by expanding out from their traditional direct gas impingement system (DGIS) AR lines with new variations and options, such as piston-operated rifles and carbines. However, one of the newer companies has taken the exact opposite approach.

Korstog Rifles, a sister company to Huldra Arms and part of the Mills Fleet Farm family, has recently started offering a line of DGIS rifles that combine impressive quality with the tried-and-true operating system of the U.S. military’s M4 Carbine and M16 series of weapons. But what is interesting about this is the fact that Mills Fleet Farms’ first dive into the AR market was with its full line of Huldra Arms gas piston guns. Manufactured by Adams Arms, the piston-operated Huldra line sidestepped the DGIS system entirely.

But, while piston-operated systems have many merits (namely cooler and cleaner operation), there are many that prefer the battle-proven DGIS system of the parent weapon system. For those unfamiliar with DGIS, this is a system where gas is tapped off the bore and driven back through a hollow gas tube above the barrel. This gas impacts against a gas key attached to the bolt carrier assembly that cups the end of the gas tube. The force of this impact drives back the bolt carrier and cycles the action.

While there are some vocal critics of this system (mostly due to the fact it dumps hot gases and fouling directly into the action), it has many advantages. Specifically, it makes for a lightweight and often very accurate rifle. It also benefits from decades of battle-tested refinement by the U.S. military. Recognizing that there was a market for a DGIS rifle matching the quality exhibited by the Huldra Arms piston line, Mills Fleet Farms introduced the Korstog Rifles brand.

“Korstog Rifles … has recently started offering a line of DGIS rifles with the tried-and-true operating system of the U.S. military’s M4 Carbine and M16 …”

You may have noticed a bit of a theme in the naming of the Mills Fleet Farm companies. Huldra. Korstog. These come from an affinity the companies have for Scandinavian history and mythology. And this should come as no surprise if you consider the geographical location of Mills Fleet Farms and its related companies in Minnesota, where significant numbers of Scandinavian immigrants relocated after their pilgrimage to the United States. It is from this cultural basis that the Huldra and Korstog company names were selected.

According to the company’s website, Korstog is the Norwegian word for “crusade,” and describes in notable detail the history and exploits of King Sigurd I of Norway. Sigurd I led 60 ships and an estimated 5,000 men under his command to Jerusalem and helped establish the security of the city after the First Crusade, which was quite tenuous at that point. It is clear that Sigurd I’s legacy played a significant role in the selection of the Korstog name for the company.

As with the Huldra Arms line, Korstog 5.56mm NATO products (both complete AR rifles and uppers) are produced by Adams Arms to the company’s specifications. The line includes the Brann, a straightforward M4-style carbine; the Jager, a high-end precision rifle; the Voli, a Magpul-enhanced, optics-ready carbine; and the Var, a finely equipped, duty-ready carbine. I recently had an opportunity to go hands on with a sample Var rifle.

At its core, the Var immediately struck me as a 5.56mm NATO carbine equipped with top-end features for the discerning AR enthusiast. While the strength of the AR is its modular nature and a shooter’s ability to reconfigure it into numerous variations, there is undoubtedly a market for buyers who want an AR that is fully equipped with quality parts from the factory and ready for duty. I believe it is just this segment of the market to which the Var caters.

The Var is designed to deliver extreme performance in as compact a package as possible (without running afoul of short-barreled rifle restrictions). The Melonite-coated, 5.56mm NATO-chambered barrel, manufactured from chome-moly-vanadium 4150 steel and featuring a 1-in-7-inch twist rate, is 14.5 inches long. To bring the barrel up to a full 16-inch legal length, it has an A2-style muzzle brake/flash suppressor machined into its muzzle.

Surrounding the barrel is a Samson Evolution Series free-floated handguard manufactured from 6061-T6 aluminum. Following the recent (and welcome, in my opinion) trend of avoiding full rails around a forend’s circumference, the handguard sports a long and uninterrupted top Picatinny rail that matches up with the flattop upper receiver. The rest of the handguard is left rounded and smooth, with the ability to accept modular strips of rail where the user desires. My test rifle came with two strips of rail (1.75 inches and 3.75 inches, respectively) and a single quick-detach (QD) sling mount.

Under the forend is a mid-length gas system mated to a low-profile gas block, which is secured with Unbrako setscrews. Of note is the fact that the radius of the integral muzzle device is reduced to allow for the removal of the gas block if needed. The mid-length gas system has several very positive benefits and one relatively negative one. A notable advantage of a mid-length system is that the longer length of the gas tube and farther forward location of the gas block (which on the Var is Melonite treated for corrosion resistance) means that cooler, lower-pressure gases drive the system as compared to a standard, short carbine-length gas system. In addition, a mid-length system theoretically delivers a smoother and softer recoil impulse. The result is a softer-recoiling gun with a potentially longer service life.

The upper and lower receivers of the Var are manufactured from 7075-T6 aluminum forgings and are Type III hardcoat anodized. They are held to mil-spec dimensions, as is the mil-spec (not commercial) receiver extension tube. The A4-pattern flattop upper receiver has all the standard appointments—a forward assist, shell deflector, etc.—and features M4-style feed ramp cuts. The lower receiver has recessed chevrons cut into the front of the magazine well for gripping in case you run the gun that way.

While the receivers themselves are of a relatively straightforward mil-spec configuration, Korstog chose to offer some notable upgrades and enhancements to the controls and internals. The company equipped the lower receiver with an Ergo ambidextrous pistol grip, a Magpul MOE enhanced triggerguard, a 4.5-pound, single-stage JP Enterprises EZ Trigger and an ambidextrous safety. On the receiver extension tube, Korstog outfitted the Var with a Vltor IMod collapsible stock that features waterproof battery storage compartments as well as a rubber buttpad and strike plate.

In the upper receiver, Korstog has equipped the rifle with an M16-configured bolt carrier group manufactured from 8620 steel. To maximize lubricity, corrosion resistance and hardness, both the carrier and the gas key are finished with a coating that Adams Arms refers to as “Lifecoat.” The company claims that it offers greater hardness and lubricity than hard chroming. The gas key is attached to the carrier with Grade 8 fasteners and is properly staked, and the bolt is made from Carpenter 158 steel. It is magnetic particle inspected and features a Crane O-ring.

After a close inspection of the rifle, I came to the conclusion that my first impression of the Var was accurate. It is designed to offer the discerning AR shooter a finely equipped 5.56mm carbine ready to go right out of the box. Just outfit it with iron sights or an optic, and it is ready for duty.

For testing, I decided to equip the rifle with some duty-style optics rather than a high-magnification precision optic. My selection was a StrikeFire II red dot paired with a VMX-3T, both from Vortex Optics. While this setup may not wring out the absolute maximum long-range potential accuracy of the rifle, it would give me a chance to test the rifle with a practical setup that I believe is well suited to a rifle that could be called into use for both CQB and longer-range duties.

After outfitting the Var with the Vortex optics, inspecting it and packing up some ammunition and gear, I headed to the range. Setting up on the bench at 100 yards, I began to run the rifle through its paces, testing its velocity and accuracy. Using a combination of Black Hills, Federal and Hornady .223 loadings ranging in weight from 55 to 75 grains, I proceeded to test the rifle’s accuracy with three 5-shot groups of each loading. As the Var’s barrel features a 1-in-7-inch twist rate, I wanted to try out a good range of bullet weights with it.

With the Vortex red dot backed up by the 3X magnifier, I was able to get some very good results with the loads I selected. The Var preferred the 75-grain Hornady FPD load, with the tightest group measuring 0.7 inches at 100 yards, but the rifle performed quite well with both the Federal and Black Hills loadings as well. All in all, excellent accuracy.

I then proceeded to run a mixture of rounds I had on hand through the Var to test its functioning, ranging from 35 grains up to 75 grains. Over the course of all the testing, I ran roughly 350 rounds through the Var without a single hiccup. No break-in period. No stopping to clean and lube the rifle. It simply ran, and ran well. The rifle’s trigger broke cleanly at 4.5 pounds right on the dot, and recoil was pleasant and manageable.

With the Var, Korstog has come right out of the gate with a winner. If this rifle’s quality and performance is representative of the entire brand, then I think this will be a company to watch in the future. For those who prefer their AR to run with the established DGIS system and also want a ready-to-go duty carbine outfitted with top-tier components, the Var warrants a very close look. 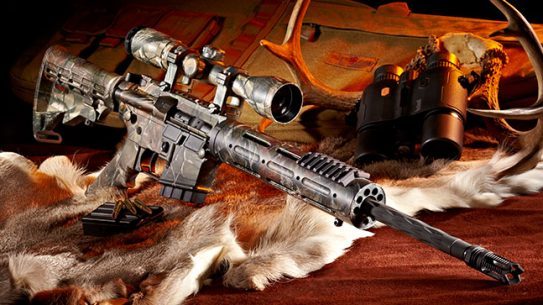 Yankee Hill Machine’s new Hunt-Ready Carbine, or HRC, in 300 Blackout can help you...