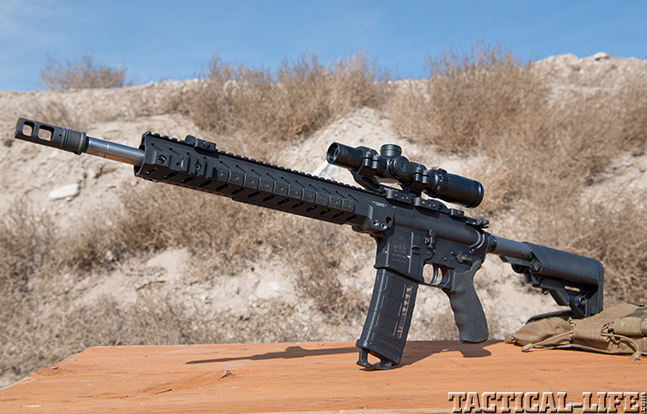 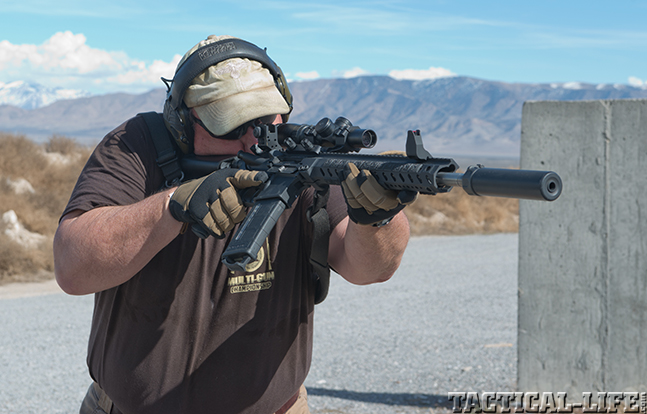 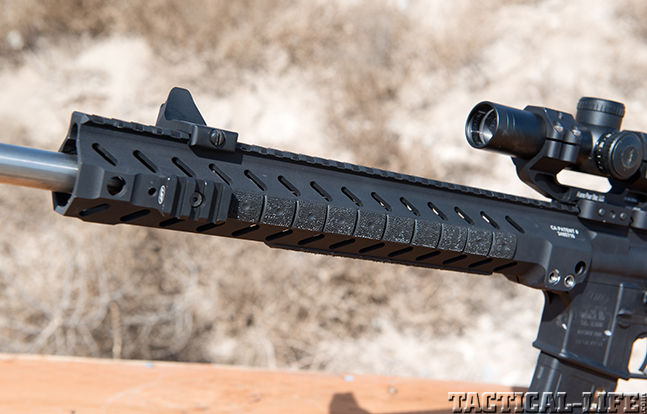 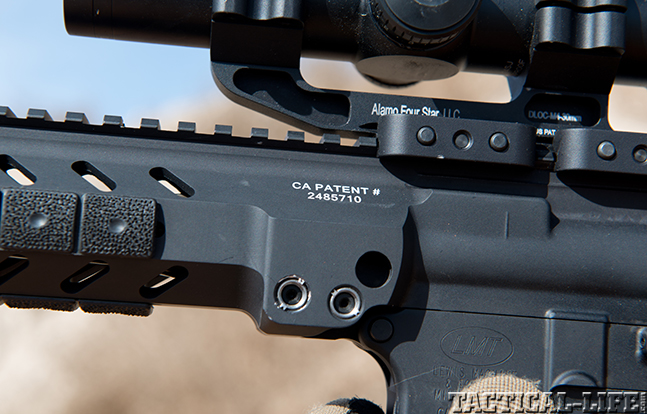 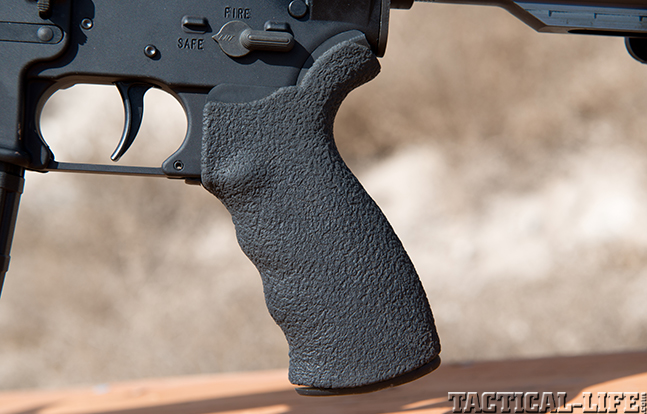 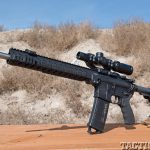 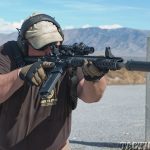 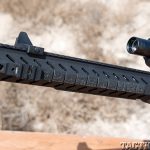 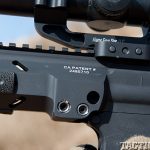 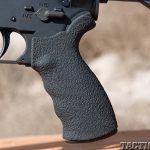 Lewis Machine & Tool (LMT) has long been known as one of the premier builders of AR-style rifles suitable for duty use. The company’s monolithic MRP rifles were among the first proven systems that allowed for quick barrel changes. The MRP design is often copied these days, and for good reason. Having your upper receiver and handguard combined makes for a solid setup and contributes to greater reliability, accuracy and overall strength. With operators adding heavy optics, lasers, night vision and more, a monolithic design becomes critical. Adding excessive weight to standard receivers can create a stress point where the handguard attaches to the receiver. Increased demand for “free-floated” barrels only makes it worse, with some ARs experiencing stress fractures. Monolithic designs eliminate this possibility by spreading the stress throughout the receiver. The added stiffness can also contribute to better and more consistent accuracy, turning combat rifles into little tack-drivers.

While well suited to professional use, the MRP has not gone unnoticed by enthusiasts, officers and competitors, especially 3-Gunners. A recent shooting event gave me the chance to spend some time with LMT’s latest rifle, the SLK8 in 5.56mm NATO.

Long committed to the operator, SureFire’s shooting events are generally more than simple “meet and greet” demonstrations. The company prefers to mount its accessories on proven platforms and truly put them to the test.

The concept of using multi-gun or 3-Gun competitions to enhance your tactical abilities is a hot topic these days. Multi-gun competitions are hugely popular right now, sparking a lot of discussion. Detractors call these matches “games” and see them as detrimental. Supporters see them as some sort of training panacea. Reality, of course, lies somewhere in the middle, and like most competitions, there are things that transfer to the real world and things that are best ignored. The trick is recognizing them. To provide some examples, SureFire had Mike Voigt and Barry Dueck put us through some training. I got to use the SLK8 carbine over a few days for the event, and it performed very well, prompting me to test it more thoroughly at home.

The SLK8 uses LMT’s monolithic MRP platform, which allows users to change out the barrel and caliber. As a long-time 6.8 SPC fan, one of LMT’s first MRP rifles spent a year or two in my hands. Originally seen as somewhat of a novelty, rifles that allow for caliber changes are becoming quite popular these days. My original rifle worked well and remains in the hands of the officer who bought it.

“Shooting on the move, the SLK8 was no less accurate. Nor was it any problem hitting steel targets out to 400 yards.”

Rail space management is a primary focus on AR-style rifles. While military operators use almost every inch of space, many law enforcement officers need very little. Many contemporary handguards start “slick” and allow you to attach rails as needed, if at all. They are also getting longer, thinner and rounder. LMT’s SLK8 uses the company’s new SLK handguard, which is slim and versatile. The monolithic top rail provides space for adding optics, red dots and other aiming aids. The remainder of the handguard is smooth, with threaded portions that accept rails of various sizes. Plastic inserts snap into the unused mounting areas, making for a very comfortable handguard. The handguard is octagonal, with rounded edges that provide a good grip. Its flat bottom is perfect for resting on barricades, and numerous vents keep things cool during hard use. Quick-detach (QD) sling swivel cups sit at the front of the handguard in the 3, 6, 9 and 12 o’clock positions. Another sits at the rear on the left side, just above the locking bolts.

Within the handguard is a 16-inch, stainless steel, match-grade barrel with a 5.56mm NATO chamber and 5R rifling with a 1-in-7.5-inch twist rate. LMT’s standard bolt carrier group is used along with an LMP103T charging handle.

The Defender 2000 lower receiver houses an LMP2400 two-stage trigger group with a smooth first stage and a 6-pound second stage. The trigger has no adjustments or parts that will work loose, making it well suited to duty use yet plenty crisp. My test model came with an ambidextrous safety, though standard models have single-sided safeties. LMT’s SOPMOD buttstock is installed on the mil-spec, six-position buffer tube. All together, the SLK8 is shipped with an aluminum, 30-round magazine, an MRP torque wrench set and a sling.

My test rifle was one of those used at the SureFire event. All of those rifles were equipped with SureFire SOCOM flash suppressors or muzzle brakes. Many were equipped with various SureFire sound suppressors. They also used optics of various magnifications or red-dot sights. Dueck Defense Rapid Transition Sights (RTS) were installed as well. RTS sights mount to your top rail and provide a targeting plane offset at about 1 o’clock. They zero just like standard sights, and they’re among the fastest transition sights out there.

For testing at home, the A2-style flash suppressor was replaced with a SureFire SOCOM muzzle brake. A SureFire SOCOM762-MINI suppressor was mounted for most of my shooting. Other add-ons included a Blue Force Gear Vickers tactical sling, an RTS sight and a Bushnell Elite Tactical SMRS 1-6.5x24mm scope mounted in an Alamo Four Star mount.

During the SureFire event, these rifles proved to be very accurate, although we never shot them for groups. Most of the shooting was on the move, with ranges between 10 and 100 yards. Whether using a scope or RTS sights, hitting steel was never an issue. Testing at home using several types of ammunition confirmed the SLK8’s accuracy. The best five-shot group, produced with Hornady’s 75-grain Match BTHP ammo, measured 0.65 inches. The SLK8 shot all of the heavy bullets into 0.75 inches or less, with the lighter bullets hovering right at 1 inch.

“The LMT SLK8 is a great performer. I have no doubt that it could easily make the transition from 3-Gun to the tactical world.”

Shooting on the move, the SLK8 was no less accurate. Nor was it any problem hitting steel targets out to 400 yards. This is where optics really shine, and some of the 3-Gun work transfers nicely. Moving from iron sights to red dots took me a while to get used to—old habits die hard. Making the move from red dots to optics has come much more quickly. I’ve used the Bushnell SRMS scope in a couple of training schools and one multi-gun competition, and it’s quickly proven its value. The SMRS’ second-focal-plane BTR-2 reticle provides several aiming points. While I’m still not 100 percent set on having the reticle in the first or second focal plane, my transition to optics is almost complete. So far it has proven to give up nothing at CQB ranges yet adds huge advantages at longer distances.

There was lots of shooting on the move at the SureFire event. Mike Voigt and Barry Dueck provided tons of tips when shooting from barricades and around vehicles. We also spent a good chunk of time using various power settings on our optics and transitioning to our iron sights. We ran the rifles suppressed and tested them in rapid fire several times. Initially, some quick “doubles” resulted in some intermittent malfunctions. Moving to factory-new Hornady 75-grain BTHP ammo, they all but disappeared. After a couple days of continual shooting, the SLK8s worked well—the only issue being a rather tight safety on some. Given how hard they were run, with no cleaning to speak of, this was pretty typical for a direct-impingement gun using a suppressor. Most of the rifles used SureFire SOCOM556-RC suppressors.

Simulating this condition at home, the rifle had no issues. Using my SOCOM762-MINI suppressor likely contributed. Continual use of a suppressor on a direct-impingement gun always mucks things up; there’s no real way to get around it short of “tuning” it just for the can. In my experience, using a .30-caliber suppressor on a 5.56mm rifle, especially the MINI, really cuts down on fouling. It also tends to increase the bolt speed more moderately, which translates to greater reliability. Of course, it’s louder—probably ear-safe outdoors. Move indoors, and it’ll be louder, but your hearing will be intact—especially when compared to just using a flash suppressor. After about 500 rounds of various types of ammunition, the SLK8 continued to run reliably, with moderate fouling in the chamber and on the bolt. The stiff safety that occurred at the SureFire never presented itself here. Malfunctions were nonexistent, and it fired bullet weights from 55 to 77 grains without issue.

Remove the suppressor and the excess fouling disappears; you are back to standard direct-impingement fouling. Given the competition tie-in, the SOCOM muzzle brake is fine. Mike Voigt provided a demonstration at SureFire showing the minimal side pressure with this device. Unlike some brakes, so long as you are a couple feet away, you’ll remain viable in a fight. Still, I will never recommend using a muzzle brake on a duty gun, at least not yet, so attach a sound or flash suppressor.

LMT’s SLK8 is a great rifle built to serve a number of roles. Well suited to any patrol duties, it transfers nicely to moderate precision work or multi-gun competitions. The stainless steel barrel is accurate and consistent, especially with the heavier bullets. The 1-in-7.5-inch-twist 5R rifling makes for a long-lasting, accurate barrel with limited fouling. Monolithic designs like the MRP are excellent regardless of the quick barrel change capability. They are consistently accurate, they support accessories well, and they seem to operate in full-auto (when needed) more reliably.

The LMT SLK8 is a great performer. I have no doubt that it could easily make the transition from 3-Gun to the tactical world. 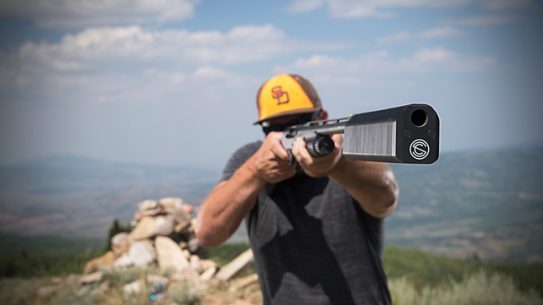 At its full length of 12 inches, the all new Salvo 12 shotgun suppressor...