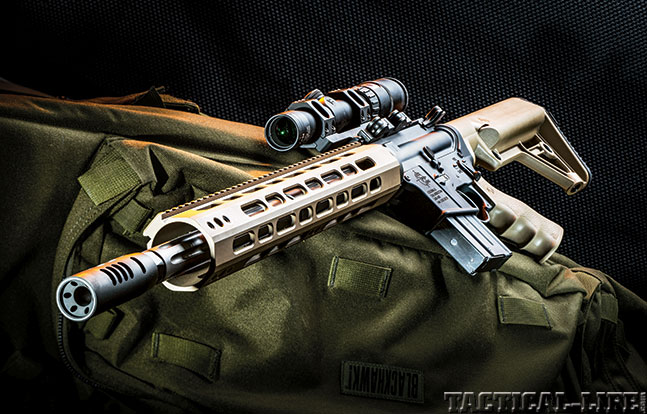 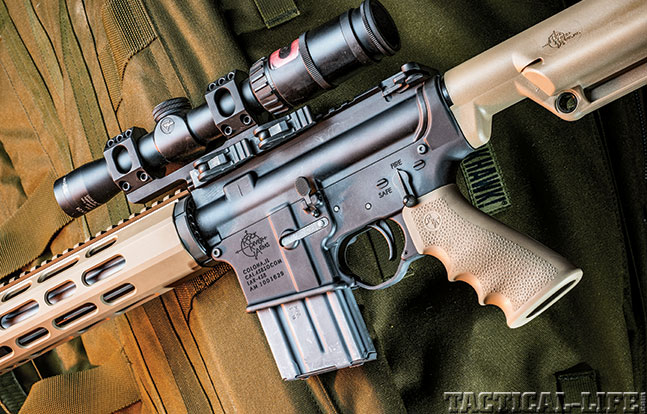 2 of 7
Gun Review: Rock River Arms LAR-458 X-1
The .458 SOCOM churns up over 10 percent more energy than the old buffalo-dropping .45-70 cartridge while fitting in AR-platform rifles. 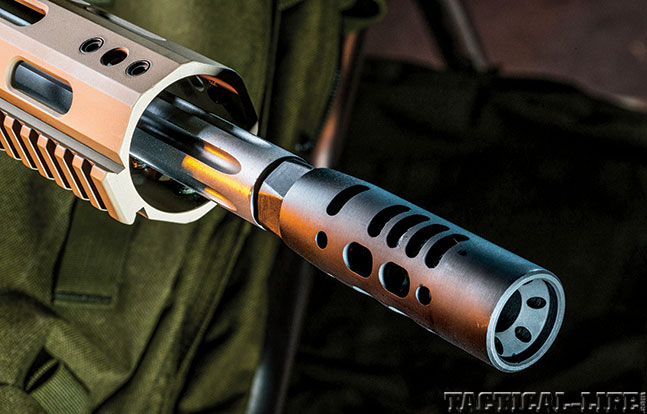 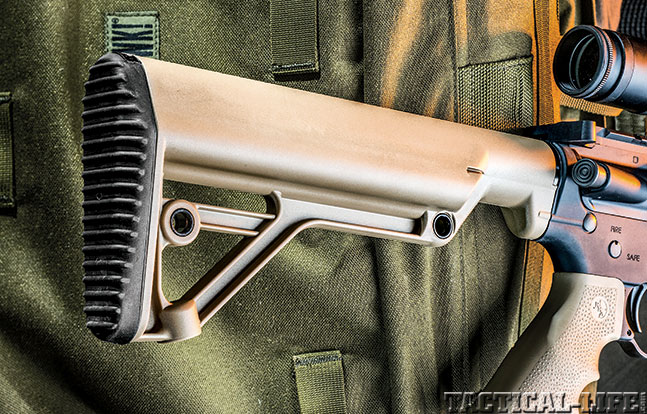 4 of 7
Gun Review: Rock River Arms LAR-458 X-1
The fixed Operator A2 stock provides an excellent cheekweld when used with optics as well as sling-mounting options. 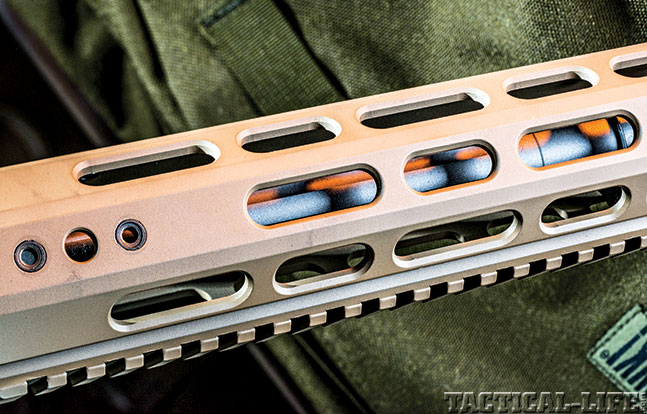 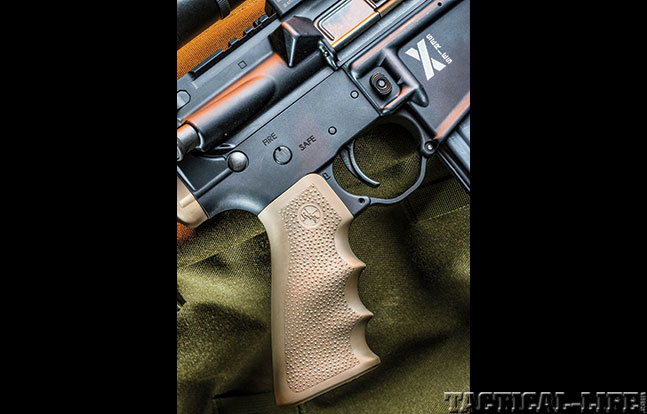 6 of 7
Gun Review: Rock River Arms LAR-458 X-1
The lower receiver comes with with a match-grade, two-stage trigger, an enlarged triggerguard and a Hogue pistol grip. 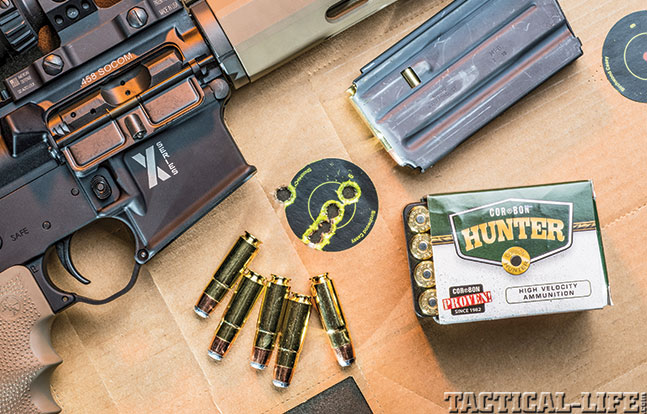 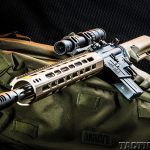 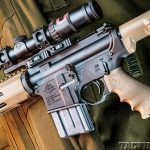 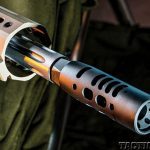 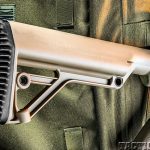 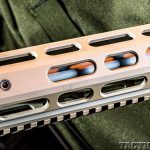 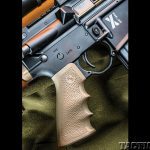 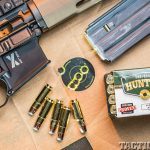 In a very short time period, the .458 SOCOM cartridge has become a staple in the armament of many American shooters. Originally conceived to provide Special Forces operators with devastating power and penetration, the .458 SOCOM is more than twice the diameter of the 5.56mm NATO bullet and churns up twice as much energy yet fits neatly within the design parameters of the M16/AR-15 platform. This power, combined with the familiar AR-15 chassis, makes the .458 SOCOM particularly appealing to law enforcement personnel. Rock River Arms (RRA) is one company that recognized the awesome potential of this cartridge early on and has now added the LAR-458 X-1 rifle to its lineup.

Built from the ground up to be a fast-handling rifle, RRA incorporated many features normally associated with 3-Gun competition rifles into the X-1. Some of these noteworthy features include a tuned, two-stage trigger; a stainless steel, cryogenically treated barrel; and a free-floating handguard. It is as handsome as it is accurate, and should prove worthy of any agency’s armament. But first a little more detail about the cartridge and its potential tactical applications.

The .458 SOCOM cartridge was initially developed for possible use by the special operations community. As conceived, these operators wanted to be able to use the standard M4 lower and magazines without modification. Besides use on armored hostiles, the round could also be used to stop vehicles and smash through walls and other hard cover.

“If your needs require a lightweight, fast-handling carbine with plenty of bone-crushing power, I’d strongly recommend taking a look at the Rock River Arms LAR-458 X-1.”

To put things into perspective, the .45-70 cartridge that killed thousands of buffalos in the 1800s could fire a 300-grain bullet at 1,810 feet per second (fps) and generated a potent 2,182 foot-pounds of energy. The big frontal area of the bullet, combined with its velocity, made it devastatingly effective on game and humans alike. But the .458 SOCOM actually generates a whopping 10 percent more energy than the old .45-70! If you’re a student of ballistics you might say, “So what? That’s about the same amount of energy a .308 produces.”

That’s true, and there are many manufacturers of AR-style .308s. But the .458 fits into the AR-15 platform for a gun that is smaller, lighter and faster handling—and the round wants to impart its energy into whatever it hits rather than drill its way through it. Additionally, a 5.56mm NATO upper receiver can quickly be installed on the lower, providing unprecedented versatility for the end-user.

One of the great things about the .458 SOCOM is how little you need to change to make it work with a standard AR-15. The .458 SOCOM is a fat, slightly tapered round that possesses a shoulder, which it headspaces on, and a heavily rebated rim. The case-head diameter is approximately 0.472 inches, or the same as a 7.62mm NATO round, and its diameter requires that the bolt face be relieved to accept this round. Both the extractor and ejector (and their springs) are different, but the carrier itself remains unchanged.

Rock River Arms’ LAR-458 X-1 utilizes the direct gas impingement system with a carbine-length gas tube and a low-profile gas block. A standard buffer is installed along with a stronger buffer spring.

The heart of the X-1 is its 18-inch, stainless steel barrel. Measuring a full 0.923 inches in diameter, the barrel is fluted, increasing its surface area and reducing weight while remaining very rigid. The fluting also helps the barrel dissipate heat better. The barrel is also bead blasted to make it less shiny, and internally it features a 1-in-14-inch rifling twist rate to stabilize big, heavy bullets. X-1 barrels are cryogenically treated for improved accuracy, and Rock River Arms guarantees the rifle is 1.5-MOA accurate with proper ammo. My test rifle’s accuracy was even better, but more on that later.

“My test X-1 rifle surpassed its 1.5-MOA accuracy guarantee. Despite the disparity in bullet weights …”

I had a chance to shoot one of RRA’s first .458 SOCOM rifles back in 2008. That unit had a 16-inch barrel, an M4-type collapsing stock and a standard A2-style flash suppressor. It packed quite a punch on both ends. As I recall, I described the recoil as being like shooting slugs in a lightweight 12-gauge pump action. But my outing with the X-1 was an all together different experience!

There’s a few factors that helped in reducing recoil. The first is that the X-1 is slightly heavier at 8.7 pounds unloaded, compared to the CAR A4, which weighed about a pound less. Another reason the X-1 is more comfortable to shoot is its excellent Operator A2 buttstock. Not only does it give a very comfortable length of pull for me, but it also has a rubber buttpad. It’s not really a recoil pad, per se, but it’s designed to keep the buttplate from sliding out of position on a ballistic vest. The buttpad is also larger in area than the M4 buttplate, and this helps dissipate some of the recoil. The wedge shape of the stock also provides a more comfortable cheekweld when used with optics. My test sample came with a fixed buttstock, but RRA also offers the LAR-458 X-1 with an adjustable Operator CAR buttstock.

But the component most instrumental in taming this bad boy’s recoil is the RRA Hunter muzzle brake. RRA’s new product development coordinator, Steve Mayer, told me, “We’ve gotten pretty good at making muzzle devices in the last 15 years. Our Hunter and Beast brakes utilize a multi-chamber design, and we can significantly reduce both real and perceived recoil as well as muzzle climb by using vector thrust to control where the gases go when they exit. That makes the .458 SOCOM very comfortable to shoot and makes it much more likely you’ll hit something on the second shot!”

For the accuracy portion of my evaluation, I fired the LAR-458 X-1 from a seated rest with my targets set out at 100 yards. I used a Trijicon 1.25-4x24mm AccuPoint scope in an American Defense mount with the magnification set at its maximum power. I fired five-shot groups without letting the barrel cool.

The scope’s illuminated reticle, an amber chevron, burned brightly against the black, 2-inch Shoot-N-C targets, and I was able to add pressure to the trigger until I broke the shot. One thing about shooting the .458 SOCOM is that it always produces a big hole, making it easy to spot your hit! The X-1’s trigger is one of RRA’s excellent two-stage triggers. The first stage is all take-up, allowing the shooter to prep the trigger prior to firing, and the second stage breaks crisply with 4 pounds of pressure. It is a non-adjustable trigger, which to me is a huge plus, and it should be especially useful for law enforcement applications.

My test X-1 rifle surpassed its 1.5-MOA accuracy guarantee. Despite the disparity in bullet weights, from 300 to 500 grains, I was surprised that the gun did not show a preference for one weight over the other. Given the .458 SOCOM’s softball-like trajectory, you’ll want to limit your shots to the 120- to 150-yard range.

Recoil was very manageable, and I was able to fire about 60 rounds from the bench without being unduly bruised. The first couple shots were disconcerting. If you’ve done a lot of AR shooting, then you’ve probably accumulated the associated muscle memory, and that is what makes shooting the .458 SOCOM so deceptive. Everything feels exactly the same as a 5.56mm weapon, so when I added the 4 pounds of pressure necessary to break the X-1’s trigger, the report and recoil always seemed to surprise me.

One of the problems of shooting this popular caliber is finding ammunition. If you rely on commercial ammo, you’ll have a hard time finding any on the shelf and your best bet might be an internet search. RRA’s Steve Mayer suggested I call Southern Ballistic Research (SBR)—probably one of the biggest commercial loaders of the .458 SOCOM. When I spoke with Buddy Singleton, the owner of SBR, he told me that he had rounds on the shelf that were ready to ship. SBR is a small, veteran-owned company that produces high-quality precision ammunition for law enforcement, military and civilian customers. I was able to locate some CorBon ammunition as well.

Mayer told me he thinks the 300-grain bullet is probably the best choice overall for the .458 SOCOM. As Mayer pointed out, manufacturers produce .458 bullets from 100 to 600 grains. The folks that designed these rounds for the .45-70 one hundred and thirty years ago could never have envisioned someone shooting these fat pills through a semi-auto. This is a case where you will want to do your own experimentation and research to see what bullet weights work optimally in your gun.

Fortunately for us, SBR has been developing and refining the .458 SOCOM for years and offers 23 different loads, each designed with a different projectile for specific missions. Each of these loads has been tested and developed for use in a semi-auto AR, and they work well with the LAR-458 X-1—it digested each of the test loads without a problem.

Surprisingly, the .458 SOCOM works best in military-style aluminum magazines. You’ll be able to squeeze between six and seven of the thumb-sized cartridges into a 5.56mm-sized 20-round magazine. Thirty-round 5.56mm-style magazines will hold between nine and 11 rounds. Mayer cautioned that too many rounds will place too much weight on the magazine spring, which might cause a misfeed by not allowing the round to feed before the bolt rides over it.

If your needs require a lightweight, fast-handling carbine with plenty of bone-crushing power, I’d strongly recommend taking a look at the Rock River Arms LAR-458 X-1. I was impressed with its accuracy and reliability. Backed with a lifetime warranty, the X-1 is a weapon you can count on! 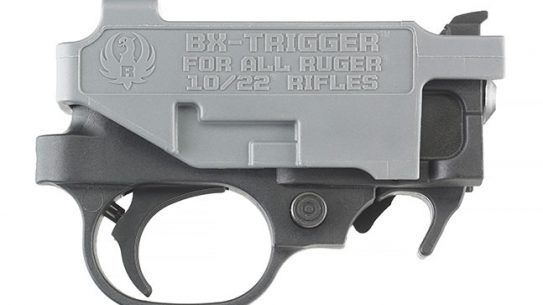 Ruger's all new BX-Trigger is an easy-to-install “drop-in” replacement trigger that is compatible with...