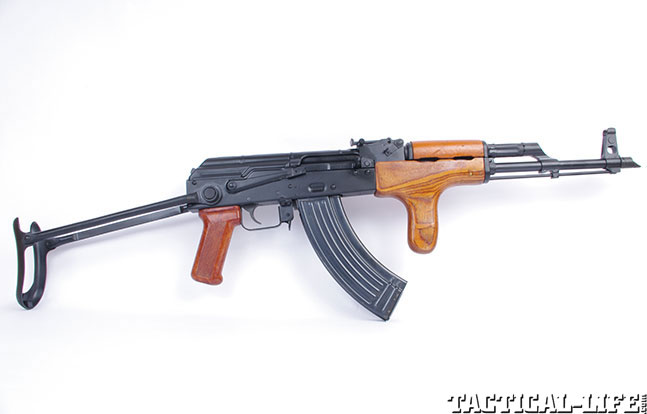 1 of 8
romanian-md-ak-2015-lead
The Romanian md. 65 underfolder features a distinctive foregrip. Its shape allows room both for mags to rock into place and for the stock’s buttplate to fit over when it is folded. 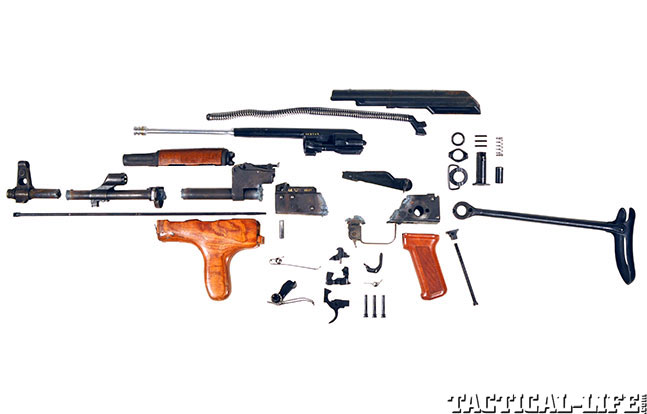 2 of 8
romanian-md-ak-2015-parts
The Romanian md. 65 kit from Apex Gun Parts served as the basis for the custom build featured in this article. Note the torch cut receiver and barrel. 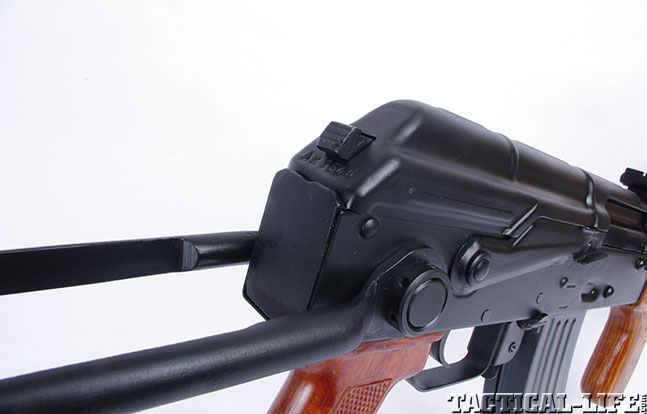 3 of 8
Gun Review: Romanian md. 65 7.62mm
The stock assembly included with the kit featured milled steel arms that are more like those of earlier AKS-pattern rifles. 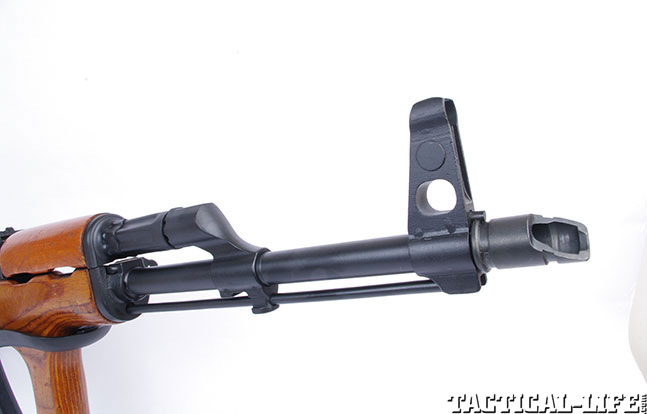 4 of 8
Gun Review: Romanian md. 65 7.62mm
The author acquired a chrome-lined U.S.-made barrel from Atlantic Firearms for the build, topped off with a U.S.-made slant brake. 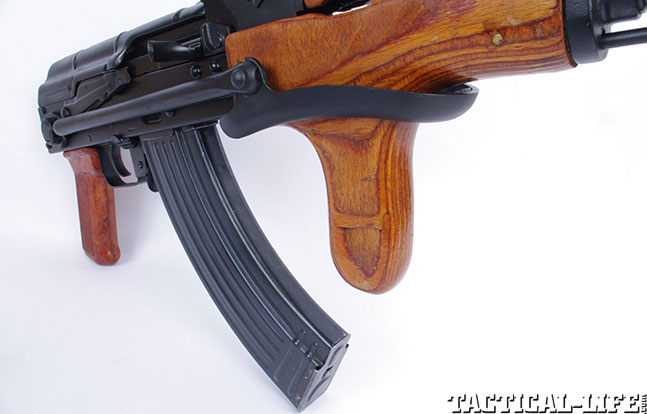 5 of 8
Gun Review: Romanian md. 65 7.62mm
The md. 65 features a vertical foregrip shaped to allow the folding buttplate of the stock to fit over. 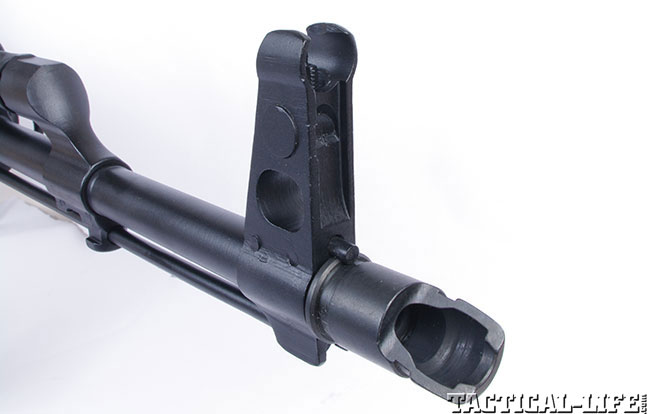 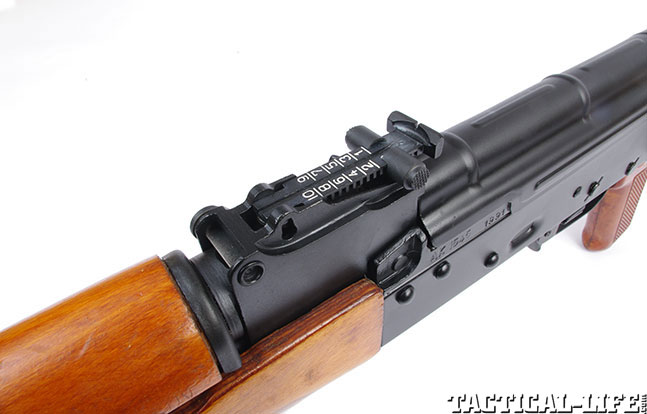 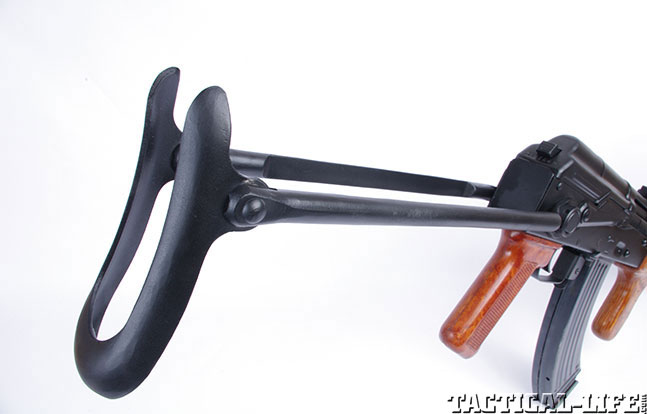 8 of 8
romanian-md-ak-2015-stock
The stock assembly included with the kit featured milled steel arms that are more like those of earlier AKS-pattern rifles. 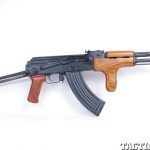 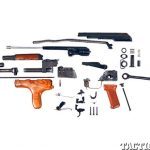 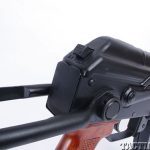 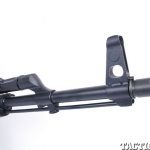 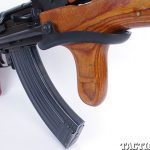 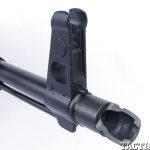 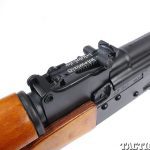 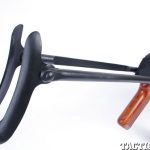 As compared to the extremely common (and ubiquitous) AR-15, the AK is still something of a mystery here in the United States. Sure, many AK owners understand the difference between an AK-47, an AKM and an AK-74, but how about the more rare and unique variants? For those looking for something a little different, one of the best options is to scour the market for a “parts kit” and locate a skilled builder to construct it into a U.S.-legal, semi-automatic rifle. For the uninitiated, parts kits are basically the remnants of demilled military guns that have had their barrels and receivers cut, with the remainder of the parts sold as a kit.

So, where would you look for one of these? I personally have had a good deal of luck with Apex Gun Parts, after having discovered the company a few years back. In that time, I have picked up some really interesting East German, Hungarian, Polish and Romanian AK kits from the company, and I make sure to keep an eye out on the company’s website for when some new treasure may pop up.

It was during one of these forays that I discovered a kit that I had wanted to pick up for quite a while—a Romanian 7.62x39mm PM md. 65-based “AIMS” kit. Romania is easily one of the most prolific AK manufacturers in the world, and I consider this underfolder to be one the country’s most interesting variants.

Apex, which stands for “Armory Parts Exchange,” was founded in 2004 by Jeff Selvig. I recently had an opportunity to interview Selvig about his company. Selvig, who worked both as an overseer of a bonded warehouse and as a salesman in the distributor section of a major East Coast firearms importer, saw the potential for a new approach to the business.

“Romania is easily one of the most prolific AK manufacturers in the world, and I consider this underfolder to be one of the country’s most interesting variants. ”

“I had the opportunity to travel the world and see behind the scenes of the market in surplus firearms during my time there,” Selvig explained to me. “I noticed that there were many firearm manufacturers, firearms importers and firearms dealers, but not really many specializing in just selling parts. The ones that were tended to be older, established companies that were not making a rapid or successful transition to the digital marketplace.”

Recognizing that there was a growing demand for this type of service to the digital community, Selvig struck out and founded Apex Gun Parts in 2004 in the small town of Palmer Lake in Colorado.

“The first products the company sold were mainly comprised of old Mauser parts and bayonets sold through eBay, Gunbroker and website discussion forums,” he told me. “One of the first big deals on parts kits for the company was a batch of U.S. M2HB .50 caliber kits that were imported from the former Yugoslavia.”

In the years since its humble beginnings in 2004, Selvig as president has shepherded the company’s development into the successful venture it is today. “We adopted a saying years ago that ‘We sell customer service in the form of gun parts,’” Selvig explained. And this customer-oriented approach has proven to be successful, with the company having expanded to the point that, in 2012, it moved to a warehouse located in Colorado Springs, Colorado.

I was particularly curious to ask Selvig how they locate such interesting products—in particular AK parts kits. “Basically, the surplus industry is dictated by overseas availability. As an example, for years there may be no Hungarian AK parts kits available and then somewhere, in some office inside the Hungarian Ministry of Defense, there is a decision to replace a certain model and quantity of Hungarian manufactured AKs. Suddenly, what was once rare is now available in abundance,” he explained.

During the course of my discussion with Selvig, I asked him why so much of the focus of Apex’s product line appears to be centered on AKs. “I started collecting in the mid-’90s, and the AK was my favorite gun. It was much maligned then and not seen by many as worthy of collecting. For me, the AK embodied the history of the Cold War and the struggle between democracy and communism. Besides, who doesn’t love buying something with U.S. dollars that was produced with Russian rubles!”

So now with some insight into the story behind Apex, I moved on to consider the history of the Romanian kit itself. Romania, as a “satellite state” falling under the umbrella of Soviet influence during the Cold War era, adopted a Kalashnikov-centric approach to small arms design. First employing Soviet-made, milled-receiver 7.62x39mm AK and AKS variants in the 1950s, the nation sought to develop its own domestically produced Kalashnikov variants based on the Soviet’s new stamped-receiver AKM developed in the late 1950s. What resulted was the Pistol Mitralieră (or “PM”) series of select-fire assault rifles.

“For the uninitiated, parts kits are basically the remnants of demilled military guns … sold as a kit. ”

The earliest in the line was the 7.62x 39mm Pistol Mitralieră model 1963, or PM md. 63 for short, with an export model dubbed the AIM md. 63. In basic design and operation, the md. 63 was a relatively straightforward AKM clone. However, the line was adapted to employ a laminated wood foregrip that set the Romanian guns apart from many of their contemporaries.

The md. 63 series proved to be a very successful design, combining affordable production costs with reliable operation. Recognizing a need for a more compact variant, the Romanians set about developing their own AKMS underfolder version of the design. The result was the 7.62x39mm Pistol Mitralieră model 1965, or PM md. 65. As with the md. 63, the Romanians also developed an export version of the underfolder rifle dubbed the AIMS md. 65. Although some md. 65 variants feature more traditional AKM-pattern forends with palm swells, the Romanians also carried over the laminated wood vertical foregrip concept to the design as they had with the md. 63. However, due to the nature of the underfolding stock design, it required some “tweaking.”

The issue with including a vertical foregrip on an underfolding AKMS-style rifle is twofold. Firstly, the underfolding stock is designed to fold flat against the base of the forend, so a foregrip cannot be swept forward as it will not allow the buttplate to fold over it. But the way magazines “rock” in and out of a Kalashnikov precludes the use of a foregrip that sweeps drastically rearward. The solution was a somewhat short and “stubby” foregrip with an ever so slight rearward cant, allowing the folding buttplate to clear it as well as providing enough room for a magazine to rock in and out (but just barely). The result is one of the more unique-looking AKMS variants around, in my opinion.

With the Romanian md. 65 kit on its way, I set about the process of having it turned into a working, civilian-legal, semi-automatic rifle. From past experience on projects like these, I knew that the build would require a certain amount of U.S.-made parts for the rifle to be Section 922(r) compliant under current firearm regulations. With a stamped-receiver gun like this, it would take a minimum of six U.S.-made parts to achieve this.

A logical starting point would be a new receiver and barrel, as they were the two primary parts not included with the kit. For the receiver, I picked up a NoDak Spud NDS-1 receiver designed for AKM-pattern builds. For the barrel, I went to Atlantic Firearms and picked up one of the company’s own chrome-lined units that features muzzle threading and a pre-cut gas port. That left me with four more parts that I needed to acquire. The next logical step was a new semi-auto fire control group, so I picked a TAPCO G2 Trigger Group (made up of a single-hook trigger, hammer and disconnector), which knocked out three more parts for me. For the final part, I picked up a U.S.-made slant brake for the muzzle.

For the project itself, I knew exactly whom I should contact—In Range, Inc.’s Troy Sellars. When I first got into having parts kits custom built into working rifles, I asked around with several of my compatriots in the AK community regarding a skilled builder. Sellars name came up as a great source for quality work. Over the years, Sellars has built Romanian, East German, Polish and Bulgarian guns for me, and each of the builds have been stellar. So, I ensured that all the parts were sent to In Range, Inc. and waited for Sellars to work his magic.

A few weeks later, a complete and functioning semi-automatic md. 65 arrived at my gun shop. The rifle exhibited the workmanship I have come to expect from Sellars, with it sporting an attractive satin black moly coating over a Pakerized finish. The kit featured an older-style underfolding stock with milled steel arms as is often seen on these guns.

I took the rifle and three types of ammunition out to the range and ran it through its paces. While underfolders can be a challenge to shoot, the rifle did quite well with it averaging around 4.5 to 5 inches at 100 yards with all loads, and a tightest group of 4.00 inches with one. It is no varminter, but these results are well within what I would consider acceptable for the intended purpose of this design. There were no malfunctions during the testing.

Thanks to Apex Gun Parts, In Range, NoDak Spud, Atlantic Firearms and TAPCO, I have been able to add a very interesting AK variant to my collection that is not only an interesting reference rifle, but also a fun shooter. If you are looking to locate some of the more rare and interesting AK variants, I recommend you keep an eye out at Apex Gun Parts’ website to see what they have dug up. To learn more about the Romanian md. 65 series, take a look at Frank Iannamico’s AK-47: The Grim Reaper. 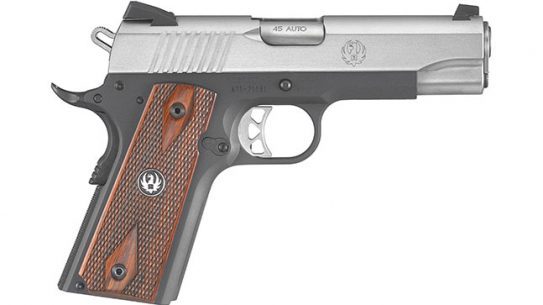