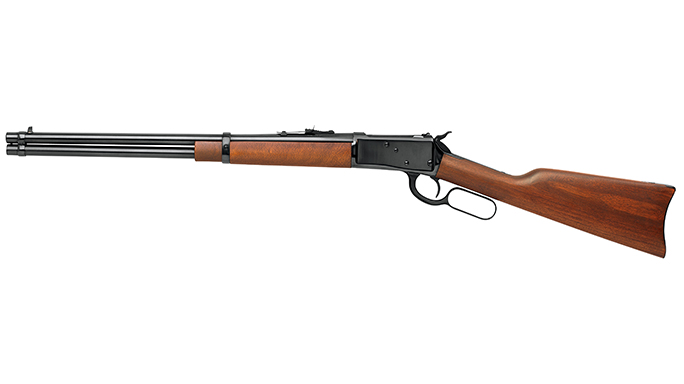 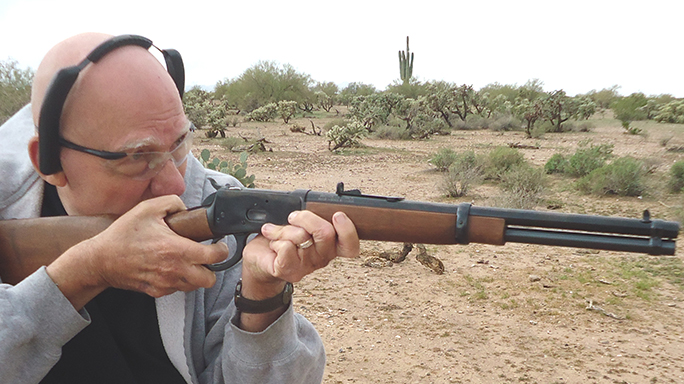 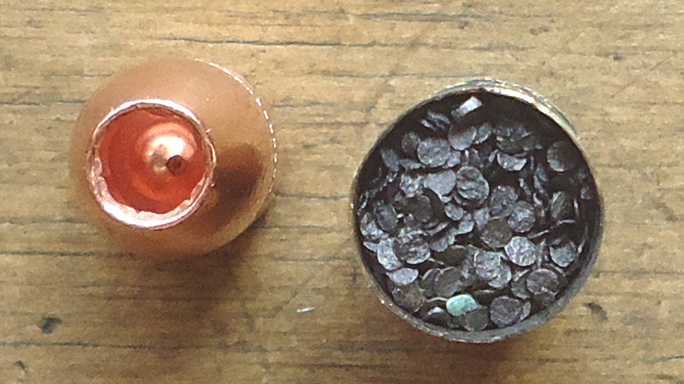 3 of 5
Gun Review: Rossi’s R92 .45 Colt Replica Rifle
The Rossi R92 in .45 Colt ran well with a variety of handloads, including one featuring a copper 185-grain Barnes bullet. 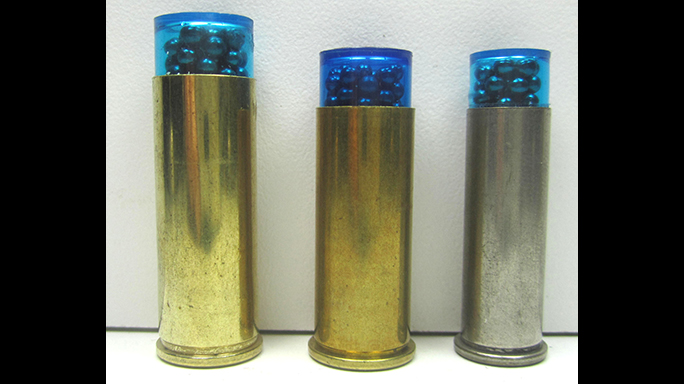 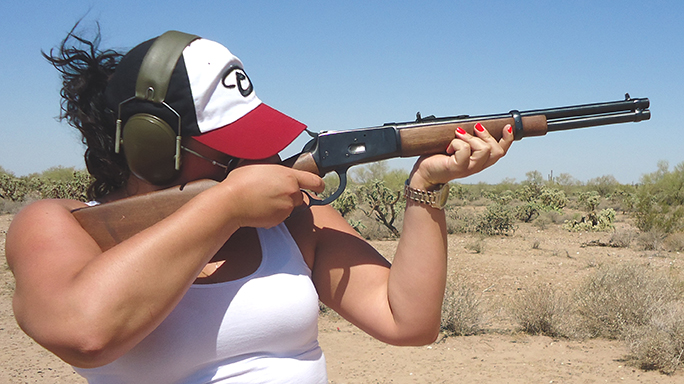 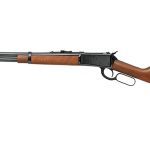 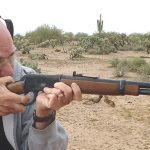 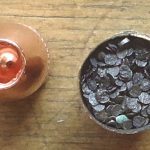 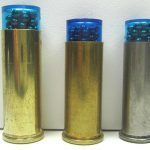 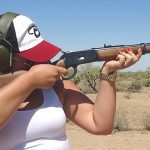 Replica guns are popular for various valid reasons, including cost. Quite a few firms produce replicas in various styles and calibers. Some originals are just too valuable to risk shooting, so they sit around and look pretty. However, there are many shooters, including yours truly, who like to shoot them. Let’s keep in mind why most people shoot. It is a recreational hobby—many people do it just for fun—and there is nothing wrong with that.

John Browning designed the original Winchester Model 1892 as a scaled-down version of the massive Model 1886. It replaced the much older Model 1873, which was a blackpowder design. The 1892 was originally offered in .32-20,
.38-40, .44-40, and later on, the .25-20 and .218 Bee. There were also a couple of variations, including the Model 53, which has a short magazine. Why the Model 1873 and the original 1892 didn’t come out in .45 Colt is a mystery to me. Unfortunately, original Model 1892 rifles start at about a grand, but many are much more expensive, costing up to several thousand dollars. This puts them out of reach for the average shooter, including myself.

Rossi produces reasonably priced and quality weapons, including its own version of the 1892, known as the R92, in .357 Mag, .44 Mag and .45 Colt. The prices are within the reach of most shooters, and they generally have good quality. I recently received a Rossi R92 rifle in .45 Colt, and it was love at first sight. It is lightweight and well balanced, and I can easily see it as a backwoods hunting rifle. With modern loads, the .45 Colt can handle deer, pigs and black bears at closer ranges.

The R92 has a strong action capable of handling any sane loads. It is a plain, no-nonsense rifle with no frills, which should make it a good truck or saddle gun. The wood is dark and plain with no checkering, which looks good to me. The bluing on the barrel and action is nice and even, giving the R92 a pleasant look. The rifle also has the standard buckhorn sights but no easy provisions to mount a scope. This isn’t a serious issue for the rifle’s intended ranges.

Rossi offers a number of R92 variants, including those with blued or stainless steel finishes. You can also choose between 16-, 20- or 24-inch, octagonal barrels. If you like a novel gun, Rossi produces a model known as the Ranch Hand with a 12-inch barrel, a shortened stock and a large lever.

The .45 Colt round has been around since 1873 and is as popular as ever—for good reason. It is flexible and powerful, especially if you handload. With modern loads, it will equal the .44 Magnum in high-end performance. There is also a good choice of cast and jacketed bullets available on the market, and it isn’t hard to load for. The only problem, which hopefully is temporary, is the difficulty of getting components. Since the .45 Colt is flexible, I shot an assortment of factory and handloads including some .45 Schofield rounds. The Schofield loads would be nice for Cowboy Action Shooting because the case is shorter and it’s easy to employ light loads. With these Schofield loads, recoil is nonexistent, which would suit cowboy shooters and youngsters.

For versatility, I used some .45 ACP bullets. The only thing is you have to put a cannelure on the bullet. Failure to do that will result in bullets walking, and in a tubular magazine they will be shoved down into the case. I use a CH tool, and it isn’t very hard to perform that task. For those who don’t like to use lead slugs, another option are the copper-plated slugs produced by a couple of makers; Berry and Ranier are two of the most common. The problem is that they also lack a cannelure, and for best results one should be installed. Since they are soft, a cannelure is easy to install; just be careful not to make it too deep. That will weaken the bullet, causing negative results. In addition, most of the plated bullets list the maximum velocity they should be used at. For best results, follow that advice. Since most loads are used for general target practice, high velocity isn’t necessary.

One other thing to remember is a rifle will give you 200- to 300-fps more velocity than a handgun using the same load. That is especially true with heavy loads. If you want an extremely useful combo shooting the same round, it would be hard to beat a Rossi and a strong modern handgun, such as a Ruger Blackhawk. If more power is desired, Rossi makes a model chambered for the .454 Casull, and with a matching handgun a shooter can handle virtually any situation that may arise.

The Rossi R92 will hold a total of eleven .45 Schofield rounds, but they jam on occasion because they are short. I had one that didn’t go through the action until I cycled several times,

so extreme caution is advised, so as not to leave a round in the magazine when you think that it is empty. Due to availability and cost, it would be good advice to use cast bullets as much as possible. They will usually match the jacketed slugs in accuracy, and some of the better ones will do an excellent job harvesting large game.

The Rossi R92 comes up to the shoulder nicely, and I absolutely love its light weight, as my arms aren’t as strong as they used to be. If the recoil is bothersome, a slip-on pad should rectify that issue. Shooting off the bench shows that it shoots well but high and left, which was easy to rectify. The 300-grain cast bullet at 1,500 fps shot nicely, and recoil wasn’t a problem in spite of the rifle’s lightweight.

Accuracy with this rifle is partly a function of the shooter and how good his eyes are. With careful shooting and a good load, the rifle is quite capable of 3- to 4-inch groups at 100 yards. A younger shooter with good eyes can do better. After a few hundred rounds, the rear sight started to move, but that is a fixable problem. As usual, I had several people at the range, including a few women and a youngster, shoot the rifle, and everyone really liked it. They commented that it was light, accurate and didn’t kick much.

If you do some searching on the internet, finding suitable bullets for most tasks is an obtainable goal. There is a very large selection from basic cast rounds to exotics. The best method is to decide what you are going to do with the ammo and then select the appropriate slug. A great high-end bullet for serious hunting would be a Barnes. They are lead free, so they can be used in California or any other lead-free zones.

Over many years I have used a lot of Hornady bullets and ammo, and the company’s rounds are definitely top performers. Hornady offers its Flex-Tip bullets in various rifle and handgun calibers for truly excellent performance. If you don’t reload but want high performance, Buffalo Bore might be just what you are looking for.

Federal has been making ammo for many years, and the company also has a couple of .45 Colt loads. Sierra produces a number of suitable bullets for the .45 Colt. My favorite is the 300-grain JSP, though unfortunately I couldn’t get any for this test in the time allotted. I have used it in the past along with some 230-grain bullets with good results. 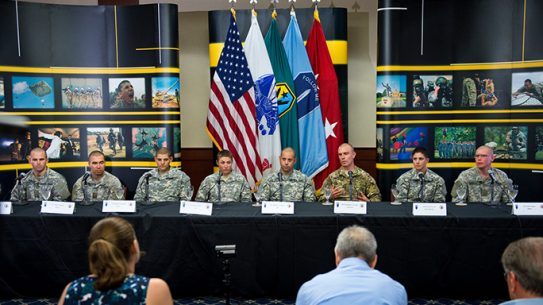