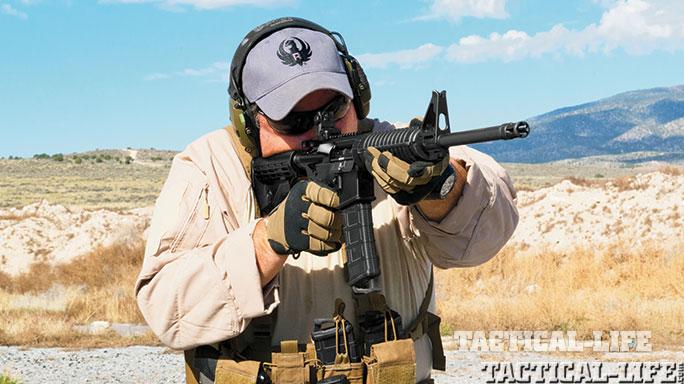 1 of 7
Gun Review: The Battle-Ready Ruger AR-556
Ruger is making waves in the gun world again—this time with an American-made, direct-impingement AR that is very affordable while still featuring Ruger’s renowned quality. It’s ready for any mission right out of the box. 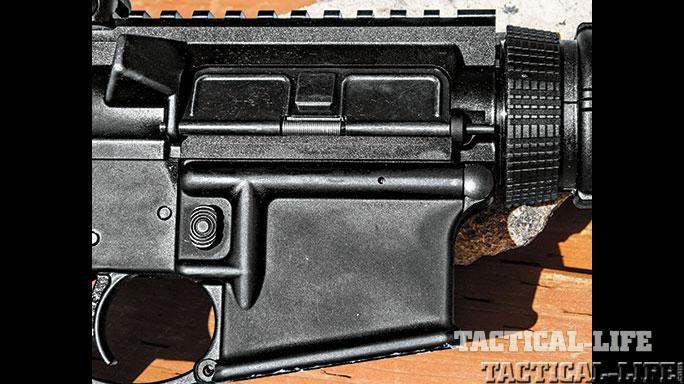 2 of 7
Gun Review: The Battle-Ready Ruger AR-556
The upper and lower receivers are Type III hardcoat anodized and given traditional AR features, including a dust cover. 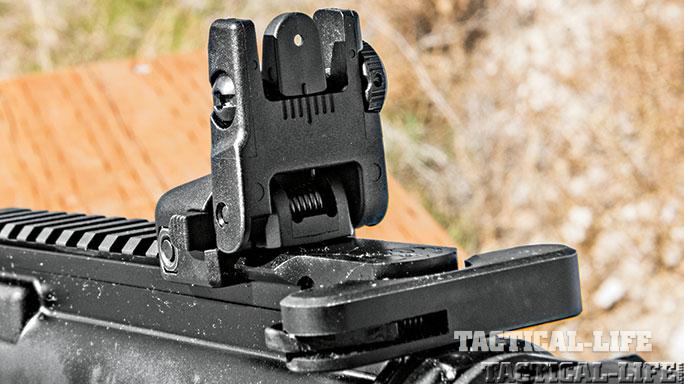 3 of 7
Gun Review: The Battle-Ready Ruger AR-556
The included Rapid Deploy rear sight is adjustable for windage and can be folded down, out of the way, if necessary. 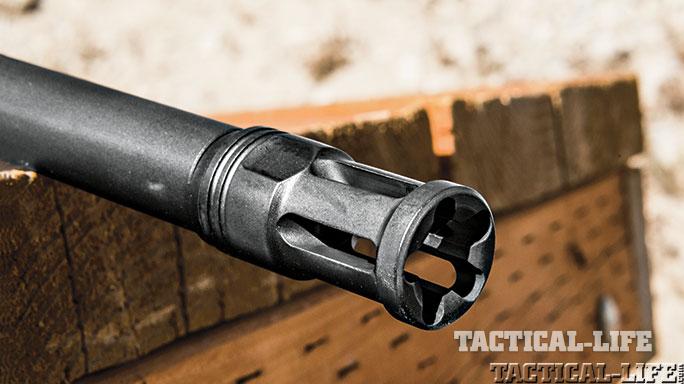 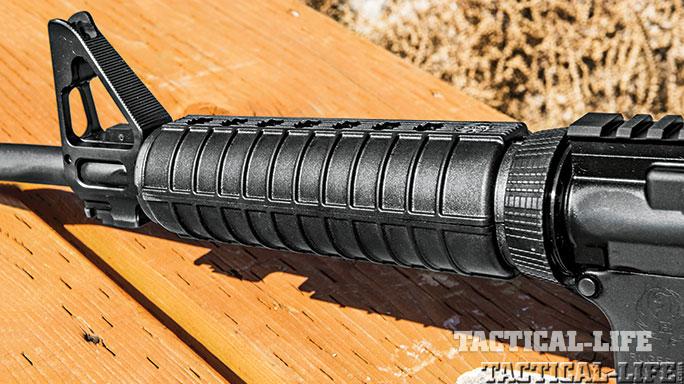 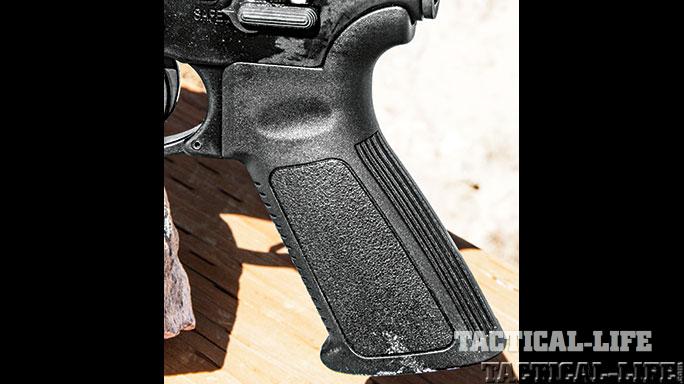 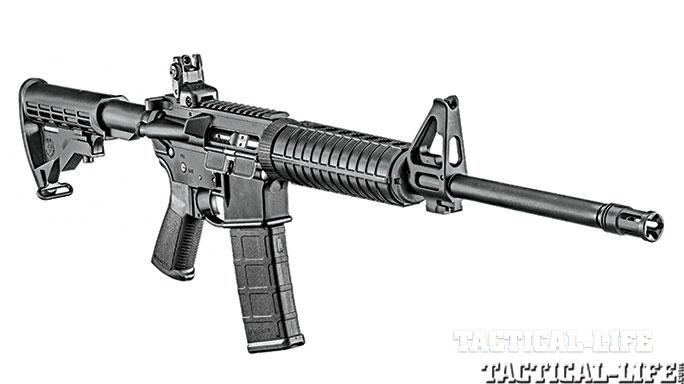 7 of 7
Gun Review: The Battle-Ready Ruger AR-556
Ruger is making waves in the gun world again—this time with an American-made, direct-impingement AR that is very affordable while still featuring Ruger’s renowned quality. It’s ready for any mission right out of the box. 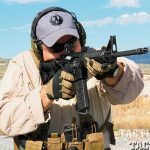 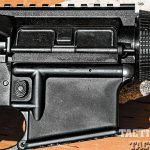 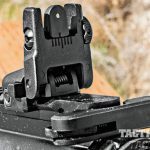 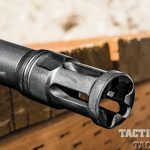 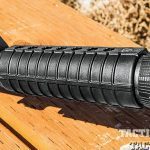 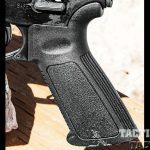 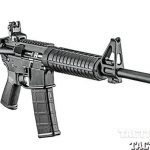 One of the most widely fluctuating markets in the gun industry revolves around the AR. Over the last few decades, it has swung back and forth repeatedly. Prior to the 1994 “Assault Weapons” ban, the AR was almost obscure, even in the police market. Restricting their manufacture spiked their sales and brought the AR out into the mainstream, introducing it to the civilian market. Prices soared, with new accessories hitting the market and manufacturers producing “ban-compliant” models to address demand. As the industry adapted to the law, prices eventually settled back down. Rifle prices were pretty steady, almost affordable in some cases, until the next fear of a restriction hit. Our last increase was stratospheric, with prices reaching into the thousands of dollars, leaving most rifles out of reach. That has settled again, although not nearly as much as in previous fluctuations. Demand remains high for the platform and looks to stay that way with an eye toward affordability.

When Ruger decided to enter the AR market it introduced the SR-556, a piston-driven AR that was downright reasonable in price for the day. Solid, dependable, accurate and reliable, it remains very popular. There are no compromises here—it’s a great rifle. Consistent enhancements have kept the SR-556 series at the top of its game. Still, it is a piston-driven rifle with a retail price tag near $2,000, which isn’t exactly “entry level” these days. We needed a high-quality AR that was truly reasonable in price with no compromises when it comes to features and quality. Well, Ruger has done it again, this time with the direct-impingement AR-556.

Over the years, the gas piston operating system has dominated the tactical market and held a solid position in the civilian world. Piston-driven rifles have their advantages, but they usually have more moving parts, weigh more and cost more. Unless you need the advantages of a piston system, a direct-impingement rifle is a great choice. Simple and lightweight, they are accurate, reliable and capable of handling what most operators need in an AR. The AR-556 fits this bill perfectly for new buyers on a budget.

“The AR-556 handled everything thrown at it without a single issue.”

The rifle starts with forged 7075-T6 aluminum upper and lower receivers that have been Type III hardcoat anodized for durability. The upper receiver features a cold-hammer-forged, chrome-moly, medium-contour steel barrel. Measuring 16.1 inches long, the barrel has a 1-in-8-inch twist and a 5.56mm NATO chamber with M4 feed ramps. It also has 1/2×28 threading for adding suppressors and comes with a standard flash suppressor.

The upper also features a chrome-plated bolt carrier with a properly staked gas key. A matte black oxide finish on the exterior of the bolt carrier provides corrosion resistance. Built from 9310 steel, the bolt has been shot-peened and magnetic-particle (MP) inspected. The upper includes an ejection port cover, a forward assist and a brass deflector. The front sight is milled with a serrated rear ramp to cut down on glare. This sight sits at the standard A2 height, so it works with any rear sight, and a quick-detach (QD) sling flush cup is included on the bottom—a really nice touch. Ruger also includes a windage-adjustable, flip-up Rapid Deploy rear sight. The A2-style forend, made from heat-resistant, glass-filled nylon, is attached to the upper using a modified delta ring. Simply unscrew the ring and any M4-compatible handguard can be added—no tools are necessary.

The mil-spec, six-position buffer tube holds an M4-style collapsible buttstock. Ruger has also outfitted the lower receiver with an ergonomic pistol grip and an enlarged triggerguard. The single-stage trigger is crisp and predictable, with minimal crunch and creep and no overtravel. It should meet any duty requirements. Shipped in a cardboard box with a foam liner, the rifle comes with Magpul PMAG, a lock and an instruction manual. The quality of my test rifle was apparent immediately after pulling it out of the box. There is nothing about this rifle that screams compromise. In fact, it is as well built as many rifles that cost twice as much.

Given this rifle’s appeal to first-time users, I tested the AR-556 as it arrived. With the exception of group testing, I used the rifle’s iron sights. Most new users cannot afford to add another grand in accessories to their $749 rifle, officers included. Department-issued rifles are generally bare, often military surplus, and seldom equipped as shown in the media. Most patrol rifles are issued with a sling and a couple of magazines—maybe a light if you are lucky. Officer-purchased rifles are generally just as Spartan, making this test realistic. So, would the AR-556 work for a new shooter, a personal officer purchase or an issued patrol rifle?

I used the iron sights for the initial accuracy evaluation using Federal’s 62-grain Tactical Bonded (LE223T3) ammo, a popular duty load. Shooting at 50 yards from kneeling, it was possible to keep everything inside a 6-inch circle. Moving to prone, groups were half that size. At typical deployment distances of 25 yards and closer, the AR-556 was as accurate as this platform gets. Within these ranges, these results were quite good for an iron-sighted rifle configured as this one was. It is light, capable and accurate.

Moving to 100 yards, I attached an EOTech EXPS3 for group shooting. This is a very popular sighting system. Silver State Armory’s 77-grain OTM ammo created the best group, which was right at an inch. Hornady’s 60-grain TAP A-MAX, another solid duty round, produced similar results. Every group was under 2 inches at this range. Comparatively speaking, the AR-556 is as accurate as most stock AR-platform rifles I’ve tested over the last several years.

Running this rifle hard over the course of a solid day, it never failed. It always worked—in rapid fire, from either side, upside down, in awkward positions, even with a weak shoulder mount. I used Black Hills reloads for most of the testing, and the AR-556 never missed a beat. Nothing during the hard-use testing caused a malfunction. The rifle worked with PMAG, mil-spec aluminum and Lancer magazines, with several duty rounds and FMJ ammunition. It remained accurate throughout. It did get a bit hot under the handguard during sustained fire, but that is normal. Under normal conditions the factory handguards were fine. The AR-556 handled everything thrown at it without a single issue.

The closest I could get to a criticism is the stock. Given the QD mount on the sight base, a matching mount on the stock would be nice. I was also not very fond of the rear sight, but that is a personal preference, and it will work with any AR-style sight. If I were to add a red dot, the rear sight is fine. As a standalone unit, I’d probably replace it. However, Ruger’s front sight is excellent. The grip was great, the trigger was fine, and it handled well. At just a tad over 6 pounds, the carbine was light, handy and easy to use.

If you’re looking for an entry-level AR, there’s no reason why you shouldn’t buy this rifle. It will work as is, or as a base for a build. Short of piecing together a gun in your garage with cheap parts, you cannot match the price with anything approaching the same quality, let alone Ruger’s warranty. For those looking to purchase an AR carbine, it does not get better: It’s reasonably priced and built in the United States with a warranty.

Ruger’s AR-556 is a true game-changer. Consumers still want ARs—they just are not interested in selling their cars to get them. The average buyer has been clamoring for a factory-built, American-made AR at a good price, and the AR-556 fits that definition perfectly. The gauntlet has been thrown down; it will be interesting to see if other gun companies can meet the challenge.

For more information on the Ruger AR-556, visit ruger.com. 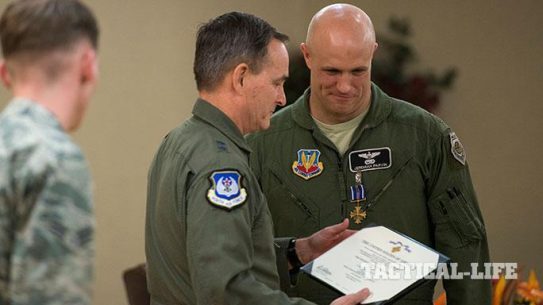