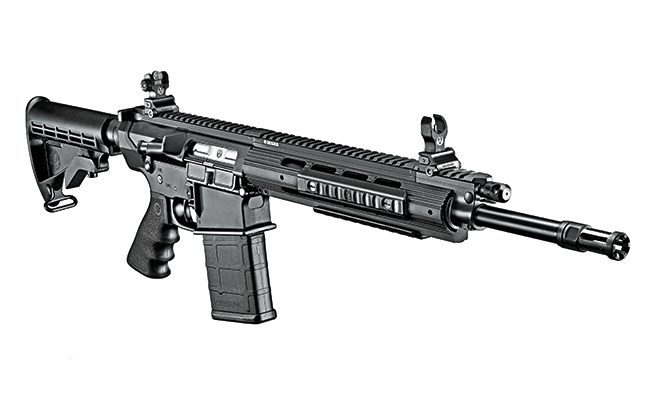 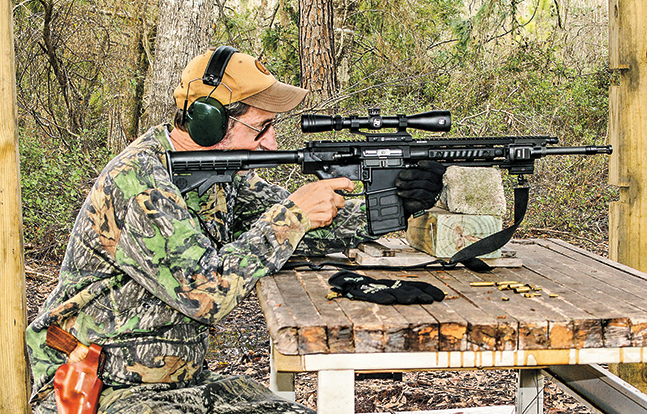 2 of 5
Gun Review: Ruger’s Buck Busting SR-762
AR Rifleman contributor Martin Topper tested Ruger’s.308 earlier this year on monster hogs in Florida. One of the giants he toppled was a 500-pounder! 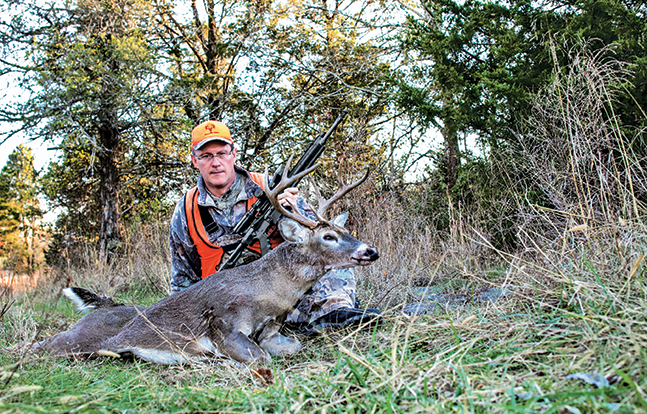 3 of 5
Gun Review: Ruger’s Buck Busting SR-762
The author spends plenty of time doing pre-season scouting on his farm in Tennessee. His field and range work paid off when this brute stepped out. 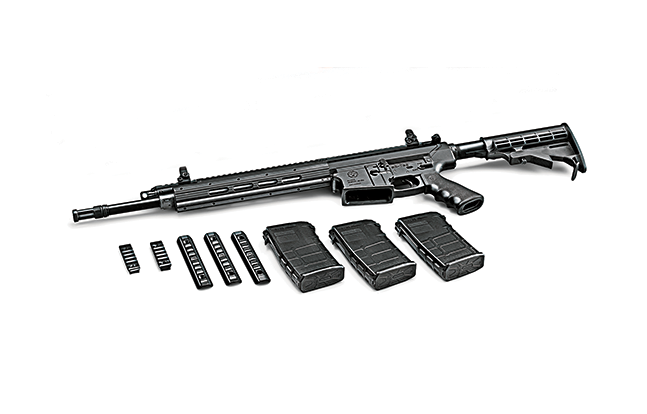 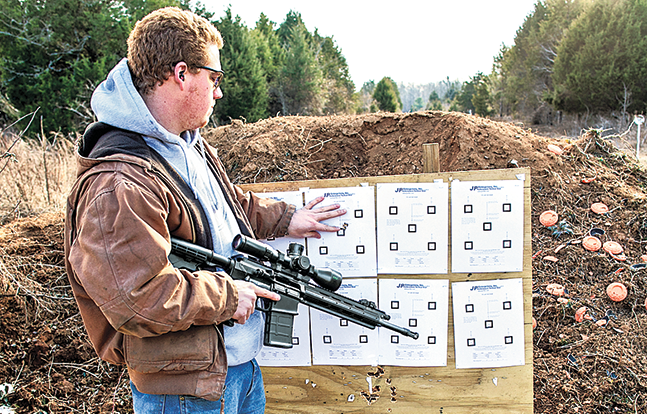 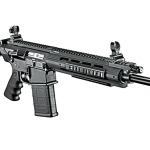 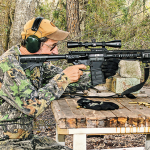 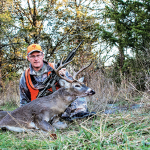 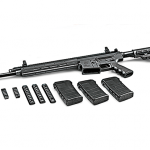 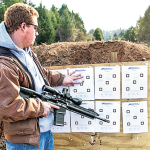 True to Bill Ruger’s sense of style blended with function, the company created a refined version of Eugene Stoner’s original AR design. The SR-556 features a cleaner-running gas piston operating system and accuracy that exceeds the capabilities of Ruger’s long-famous Mini-14. Bill Ruger wanted to deliver an upscaled version of the Mini-14 in .308 Winchester/7.62mm NATO, but shelved the project when its reliability didn’t live up to his standards. After the company introduced the SR-556 series, it was just a matter of time before Ruger’s engineers delivered a piston-driven gem, the SR-762.

I’m not sure who coined the phrase, “modern sporting rifle,” but the National Shooting Sports Foundation (NSSF) is well versed in promoting the concept when it talks about AR-style rifles. I’ve never served in this nation’s military, nor employed an “M” anything as an instrument of war. I’m simply a hunter and firearms aficionado, so the moniker of “modern sporting rifle” fits my personal views quite well. It’s in this pursuit that I first went afield with Ruger’s SR-762.

My entire summer was spent either on a tractor or a bulldozer cleaning up a derelict farm in the middle of Tennessee. I had carved out a 750-yard strip, on the way toward my goal of a 1,000-yard range. In addition to the freshly cleared and plowed range, I cleared a couple of 3-acre patches for food plots. After the application of 700 pounds of fertilizer by hand, I followed up with a mix of winter rye and Mossy Oak BioLogic.

“The SR-762 retains the features of the original SR-556 that make it a solid performer among AR-style rifles.”

Time went by, and dirt patches sprang up green and lush. Trail cameras did their job recording the bucks and does visiting the new food sources, with a select few of the creatures getting the nod if the opportunity presented itself.

The November morning wasn’t particularly cold, but a north wind forced me to abandon a close-range stand on one food plot in particular that had multiple good bucks cruising through looking for female company. To keep the food plot upwind, I had to climb an oak tree with my Summit climbing stand that was just over 200 yards to the far side. The sun drove away the shadows, but nothing showed itself for the first hour. Rain the night before had soaked the leaf-scattered ground in the narrow strip of woods where I hid. I welcomed the quiet ground cover as I snuck to my selected tree, fastened my climber and scaled upwards to about 30 feet.

But the wet leaves that had allowed a quiet approach to my stand site were almost my undoing when, without warning, I caught movement in my peripheral vision. Looking left, I saw a dandy eight-pointer 15 yards away from my tree, having walked down the fence line toward me in the woods. As he began to pass directly behind me, I stood at the same moment that he caught my scent. He bolted and ran about 40 yards before I could catch him in the Bushnell Elite Tactical ERS 3.5-21x50mm scope mounted on the Ruger SR-762. When the ­crosshairs caught up with his shoulder, I broke the shot. He only made it another 10 yards before he slid to his final resting place.

Game in hand, I took the obligatory photos and considered the blessings of the hunt and the gun I had used. The new Ruger SR-762 brings the .308 Winchester/7.62mm NATO to the popular SR-556 family of rifles. The SR-762 offers the downrange authority of the .308 cartridge in a two-stage, piston-driven rifle that runs cooler and cleaner than traditional gas-driven AR-style rifles.

The SR-762 is an ideal rifle for those who appreciate the familiar and ergonomic AR-style platform. The .308 Winchester cartridge is perfect for hunting medium and most large-sized game and enhances the capability of the AR-style platform in defensive or tactical roles.

The SR-762 retains the features of the original SR-556 that make it a solid performer among AR-style rifles. The patent-pending, two-stage piston delivers a smooth power stroke to the one-piece bolt carrier, which reduces felt recoil and improves the rifle’s durability. The four-position gas regulator allows the shooter to tune the rifle to function reliably with a broad variety of ammunition and in varying environmental conditions.

The SR-762 weighs 8.6 pounds unloaded and balances comfortably. The lower receiver features a polymer, collapsible buttstock and a comfortable Hogue Monogrip. The trigger has a surprisingly smooth take-up and breaks cleanly at 6.5 pounds. Three 20-round Magpul PMAG magazines are provided with the SR-762, along with the aforementioned rail sections, rail covers, folding backup iron sights and a sight adjustment tool—all in a soft-sided carrying case.

Pre-hunt trips to the range had revealed some interesting things about the SR-762. Its 16.12-inch barrel didn’t react negatively when I screwed on an Advanced Armament Corporation (AAC) Cyclone sound suppressor, and the point of impact only shifted 1.5 inches vertically and 0.75 inches horizontally. Many other .308-class rifles I’ve compared groups with and without a suppressor attached typically shift their point of impact at least twice as far as the stiff-barreled Ruger. Another pleasant experience was the reduced gassing effect with the suppressor attached. The SR-762’s piston system keeps gas out of the receiver area, so the extra powder residue common with direct-impingement semi-autos was greatly reduced. Accuracy differences with and without the suppressor were imperceptible.

Over the course of multiple range trips, my son, Wil, and I fired just under 200 rounds through the SR-762, with zero stoppages or feeding problems. The gas system functioned as advertised, and even packing powder/gas crud into the system while shooting suppressed (and leaving it dirty), I didn’t need to adjust the piston system to its most wide-open setting after later removing the suppressor.

I chose five factory loads to test the Ruger’s accuracy and gather velocity data. This rifle’s favorite load was Federal’s 175-grain Gold Medal Match. The average group size for this ammo stayed under 1 MOA, and the best five-round group clustered into 0.46 inches. The average velocity for 10 shots fired across an Oehler 35P chronograph was 2,370 fps.

This rifle’s next favorite load was a toss-up between Winchester’s 168-grain Match and Australian Outback’s 168-grain Sierra MatchKing ammo. Even though the Australian Outback load printed a best group measuring 0.9 inches, it averaged 2.16 inches at 100 yards. The Winchester load’s smallest group was 1.02 inches, but the average for four groups was 1.78 inches. Comparing velocities, the new Aussie load zipped along at an average of 2,574 fps, while the slower Winchester load averaged 2,442 fps. There’s not much difference at short range between these two loads, but stretch things out to 500 yards and it’s obvious that the added velocity for basically the same projectile shows itself. All things being equal, such as air temperature (59 degrees), barometric pressure and altitude (600 feet), the faster load will drop nearly 68 inches at 500 yards. By comparison, the slower bullet will impact nearly 77 inches below a 100-yard zero.

The next load was Remington’s 175-grain Match. Its average velocity from this rifle was 2,392 fps. The average five-shot group at 100 yards was 2.9 inches, with the smallest measuring 2.47 inches. The second-fastest load for this rifle was Hornady’s 168-grain A-MAX Superformance. A 10-shot string averaged 2,522 fps. The smallest five-shot group at 100 yards measured 2.59 inches.

I was pleasantly surprised by the SR-762’s accuracy. Few factory-produced ARs will print groups smaller than 0.5 MOA and keep pet loads below 1 MOA. Ruger has another winner with the SR-762. It will serve well in roles ranging from that of a “modern sporting rifle” for hunters, to a reliable SWAT countersniper weapons system in trained hands. 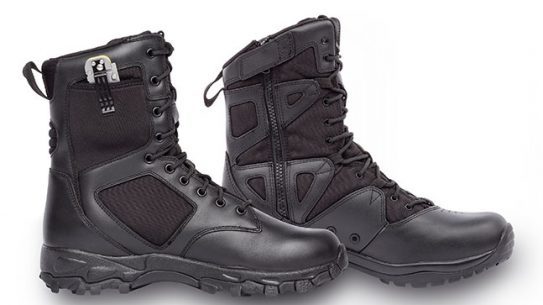