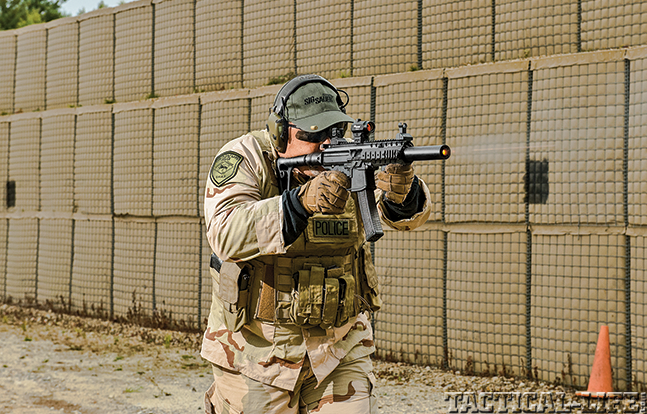 1 of 8
Sig Sauer’s MPx 9mm SMG Is a Compact Powerhouse
Lightweight, compact and available in numerous configurations and calibers—9mm, .40 S&W and .357 SIG—the new MPX submachine gun from Sig Sauer can easily be transformed to fit a variety of tactical needs. Just add a SIG-SD suppressor and it’s ready for CQB duty. 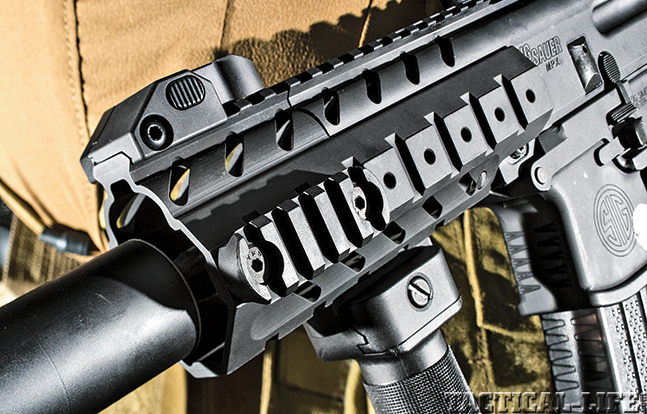 2 of 8
Sig Sauer’s MPx 9mm SMG Is a Compact Powerhouse
Picatinny rails of various sizes can be mounted to the MPX’s modular handguard for adding lights, lasers and other mission-critical accessories. 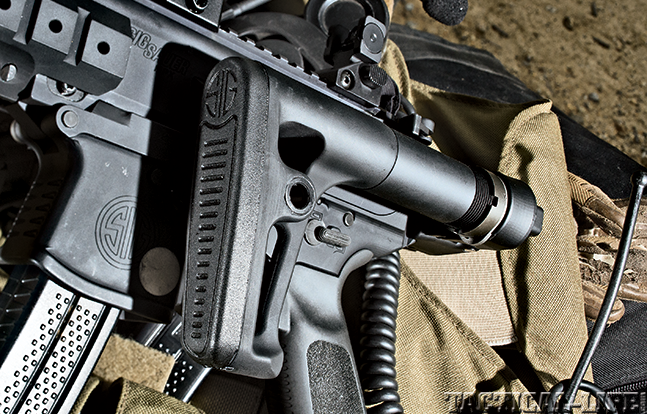 3 of 8
Sig Sauer’s MPx 9mm SMG Is a Compact Powerhouse
Several stock options are available for Sig Sauer’s MPX series of weapons, including the SBX stabilizing brace or either collapsible or folding units for truly compact firepower. 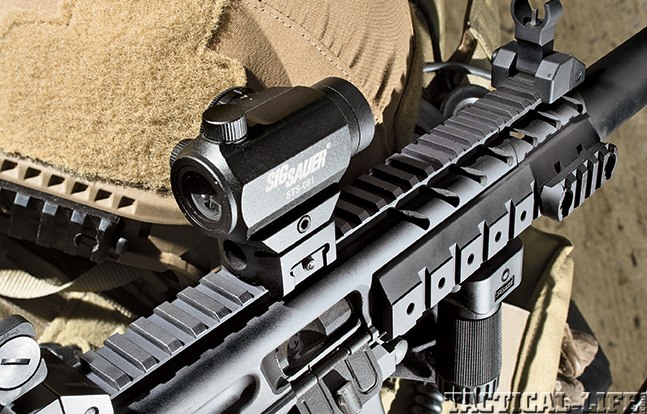 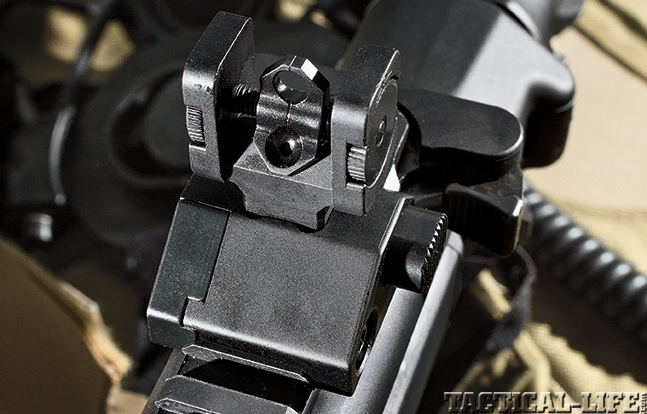 5 of 8
Sig Sauer’s MPx 9mm SMG Is a Compact Powerhouse
The author tested the MPX with AR-style sights, including this dual-aperture rear unit with protective wings. 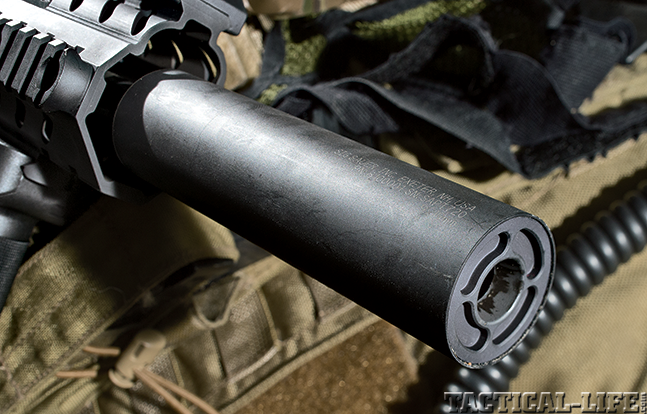 6 of 8
Sig Sauer’s MPx 9mm SMG Is a Compact Powerhouse
The author tested the MPX with a prototype SIG-SD 9mm suppressor that added only 5 inches to the end of the barrel. During testing, the SIG-SD was easy to attach and did not alter the weapon’s point of impact or reliability. 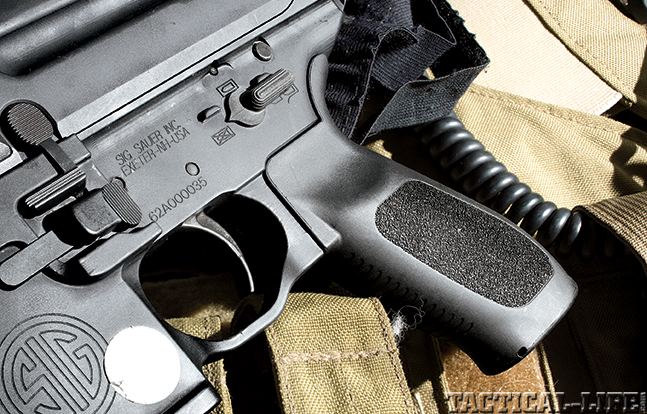 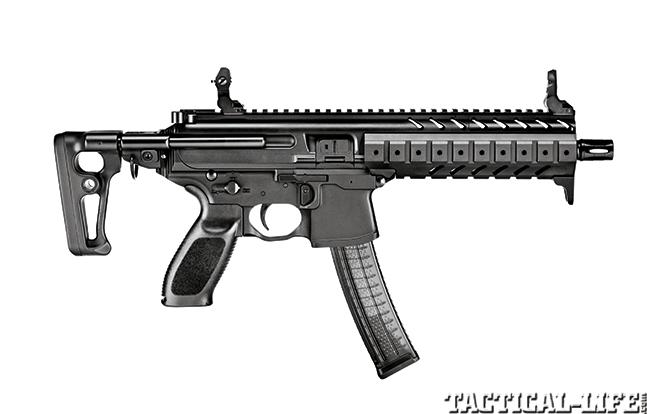 8 of 8
Sig Sauer’s MPx 9mm SMG Is a Compact Powerhouse
Lightweight, compact and available in numerous configurations and calibers—9mm, .40 S&W and .357 SIG—the new MPX submachine gun from Sig Sauer can easily be transformed to fit a variety of tactical needs. Just add a SIG-SD suppressor and it’s ready for CQB duty. 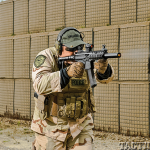 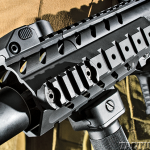 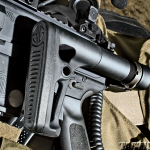 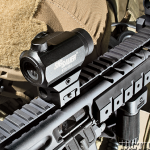 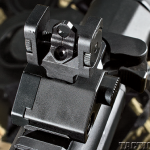 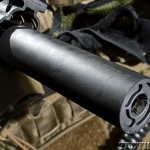 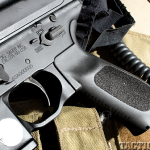 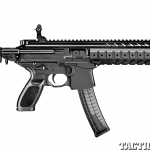 As a long-time SWAT cop, I’ve used my share of submachine guns (SMG). Early in my career, they were the norm—rifles were rarely used for entry work. Much of my initial training was on an HK MP5, and I completed training and armorers courses, including HK’s excellent Master Submachine Gun training school. These weapons are accurate, fast on target and very handy in close spaces—to the point where many rifles are being introduced to mimic these qualities. Many agencies still use similar weapons. Frankly, the rifle is not always the best tool for the job, making the SMG a viable alternative.

Operators need shoulder-fired weapons that deliver high rates of fire without the noise, flash and velocity of a rifle, and SMGs work perfectly in this role. They are more easily and reliably suppressed with very short barrels, and their accuracy is typically stellar. Simply put, there are just some jobs and operations where the submachine gun is the best tool for the job.

Enough interest exists that many companies have attempted to attain the renowned reliability and usability of the MP5 in an AR-platform weapon. In my experience, they have been only moderately successful. Viable in a few law enforcement environments, most short-barreled ARs are simply not reliable enough for a special operations soldier. Modifying these compact carbines to reliably operate in the real world has always been a compromise at best. Unfortunately, the often-over-hyped demand for rifles has kept innovation with pistol-caliber carbines and SMGs out of the picture—that is until now. Sig Sauer may have come up with the best attempt so far with its new MPX series of SMGs.

While other attempts at viable modern SMGs have met with some success, creating a subgun with the AR’s ergonomics remains the holy grail in the tactical world. Aiming for this goal, Sig Sauer started from scratch to develop what may be the next generation of SMGs in its MPX. While attending training at the Sig Sauer Academy, the opportunity arose for me to get some trigger time on the MPX submachine gun along with Sig’s 9mm silencer.

The MPX is available in a number of configurations. There is the standard MPX model that I was able to test. The MPX-P is configured as a pistol using an 8-inch barrel with no stock. The MPX-SD model utilizes an 8-inch ported barrel that is integrally suppressed. For those in need of a shorter version, the MPX-K utilizes a 4.5-inch barrel. All models except the MPX-P are available as select-fire or semi-automatic weapons with either a folding or collapsible buttstock.

“It may be the most versatile submachine gun produced in recent history.”

The MPX utilizes Sig Sauer’s proven short-stroke gas piston system, configured specifically for this platform. The use of a fully closed and locked rotating bolt enhances its operation and safety. Barrels can be changed in the field to meet varying mission requirements, and the bolt holds open on the last round. Starting out in 9mm, the MPX is easily convertible to .357 SIG and .40 S&W. A monolithic upper receiver with an integral top rail allows for the use of any common AR-compatible sighting system, including red dots and holographic sights.

The MPX utilizes AR-style controls, which makes for minimal training and transition time. Any AR-compatible trigger can also be installed. The remaining controls are also in the AR style, including the magazine and bolt release, which are ambidextrous. The non-reciprocating charging handle is placed similarly to an AR’s, and it does not interfere with any rail-mounted accessories. While the excellent SIG516 pistol grip is used, any AR-based grip can be added. Stocks are interchangeable and can be configured based on mission needs. Magazines are built specifically for the MPX by Lancer Systems, and they are available in 10-, 20- and 30-round capacities.

The MPX I tested at the Sig Sauer Academy was a standard 9mm version with a folding stock. The stock folded to the left and snapped into place nicely. The prototype 9mm SIG-SD silencer I was able to use was attached to the threaded barrel; it measured about 5 inches in length. For targeting, I had flip-up AR-style backup iron sights as well as a Sig Mini Red Dot Sight. This test sample MPX had seen some serious range time with an estimated 10,000-plus rounds of all types of ammunition run through it. I used both 20- and 30-round magazines. For ammunition, I used Speer 124-grain FMJ rounds. All of the testing was done in full kit, minus a helmet.

When it came to accuracy, the MPX was stellar. After a few rounds to find the proper hold, I was able to stack three rounds on top of each other on the head of a steel silhouette target at roughly 40 yards. Using a similar steel target with a 4-inch swinging “hostage” plate, I was able to pretty much move the swinging portion back and forth at will. Shooting from roughly 20 yards off-hand, the MPX seemed to be as accurate as a rifle, more so than a submachine gun, creating one ever-larger hole in paper targets and a solid slab of lead on the steel targets. As expected, recoil was all but nonexistent, and the SIG-SD sound suppressor kept the submachine gun pretty much exactly where it was aimed with very little movement. Sig Sauer’s 9mm MPX is flat-out accurate, even on the move.

One of the equalizing factors with an SMG is the ability to administer controlled bursts on select-fire. The standard during the Master Submachine Gun and Hostage Rescue School at HK was putting four rounds into 0.75 inches while moving and firing on full-auto. With practice, failure drills consisted of getting nine rounds on target while on the move. Mimicking this standard, shooting doubles and triples with the MPX was a breeze. With what approaches a 1,000-rpm rate of fire, it’s easy to get a lot of rounds on target in short order. Shooting on the move, it was equally easy to keep multiple-round bursts on target. About the only thing the MPX would not do easily was allow for “singles” on select-fire. Honestly, that is a product of the rate of fire and the AR trigger. I could do it, but not consistently—it’s about the same with my M16 rifles. From a practical perspective, it is less an issue with these controls, as moving back to semi-auto is pretty easy, but it is something to be aware of. For the most part, trigger presses on select-fire will be doubles or more.

This system really shines in today’s tactical world when it comes to reloading. The AR platform pretty much rules in America, and the MPX uses the same basic controls. In other words, whatever reloading protocol you currently use with your AR carbine will be exactly the same. Reloading was fast and smooth, with zero learning curve required.

The MPX’s reliability was also excellent. Ejection was consistent and reliable. Magazines inserted easily and fit in my M4 magazine pouches. Sized very similarly to MP5 magazines, my guess is pouches for those would work as well.

There are a ton of things to like here—most of all, the MPX’s similarity with the AR platform. While rumors abound as to new rifles in the military or special operations, reality is different. In this day of budget cuts and downsizing, switching to a completely new system is mostly out of the question. The AR platform will be the primary system for years, maybe decades, to come. It would be easy for an agency to transition from AR-platform rifles to the MPX, as there would be no need for reprogramming training.

Suppressed, the MPX is almost ear safe, and it’s easily usable on operations without hearing protection. Even heated up during sustained fire, there was no visible shift in the point of impact. Because of the threaded barrel, the suppressor is easy to remove, making for a really compact package. The 13.5×1 LH thread pitch keeps the suppressor from coming loose under sustained automatic fire.

The MPX’s folding stock made it possible to start from a concealed position one might use in a protective detail and move smoothly and easily to well-aimed shoulder fire—even while I was on the move. It may be the most versatile submachine gun produced in recent history.

Sig Sauer really has something with the MPX, especially for those units or teams that need a solid submachine gun. Chambered in 9mm, .357 SIG or .40 S&W, it is an excellent weapon that can be used across the NATO environment. If you are looking for a solid submachine gun, make sure you check out the new Sig Sauer MPX. 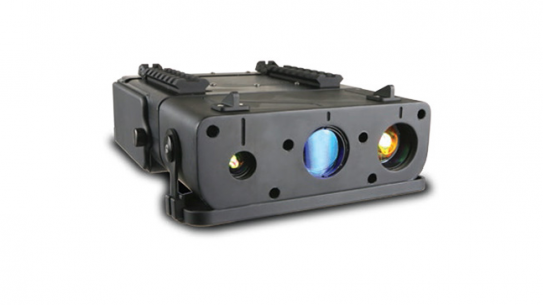 The Multispectral Handheld Markers from LaserMax hand off from ground to air platforms, limiting...