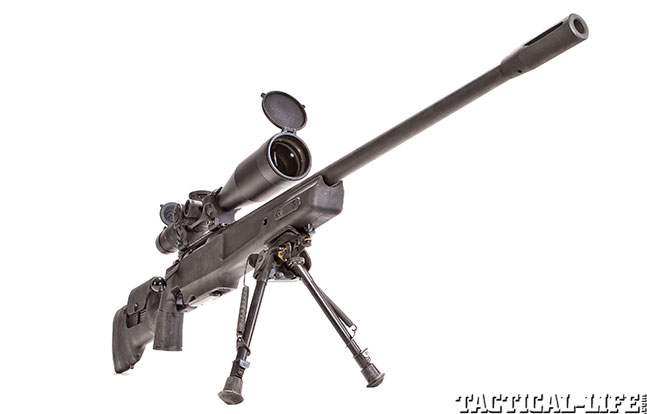 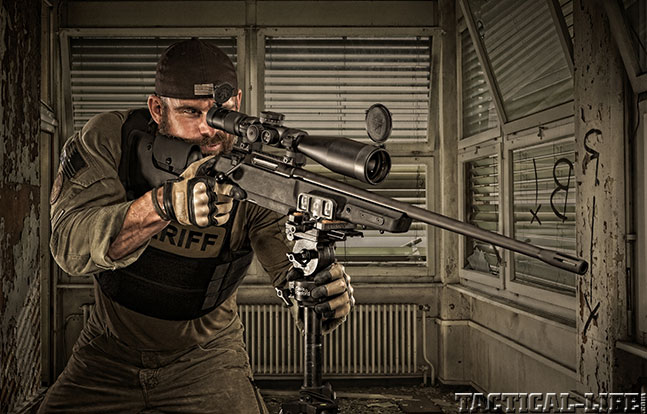 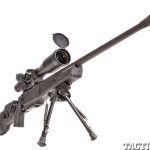 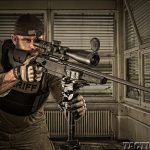 When it comes to a discussion of top-tier police firearms, the name Sig Sauer inevitably comes up. However, while most of these discussions likely center around the company’s handgun offerings, the storied manufacturer also offers an extensive line of long arms ideal for LEO use. An outstanding example of this is the SSG 3000 Patrol.

One thing that may have hampered Sig’s bolt-action precision rifles sales to LEOs in the past has been pricing. However, this may be set to change with the introduction of the SSG 3000 Patrol. The fully capable rifle costs around $1,500, placing it solidly in the price range of many competitive offerings from other companies. And, while it’s designated the “Patrol” version, this rifle is clearly suitable for police sharpshooters, not just patrol officers. 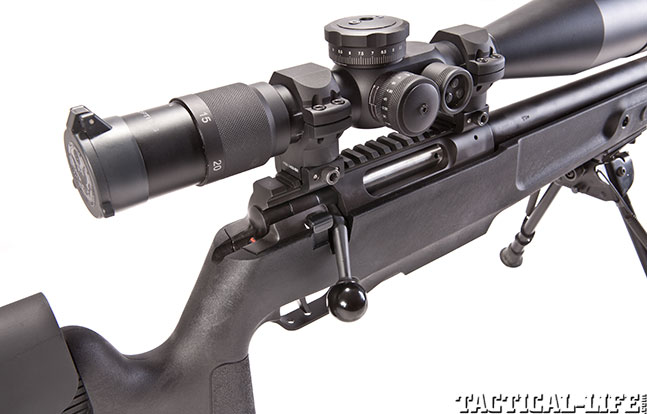 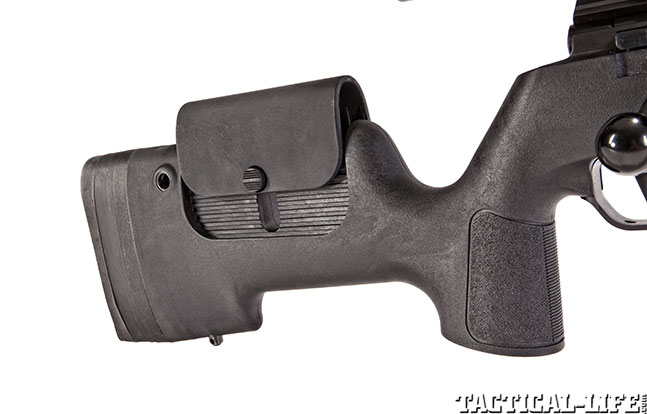 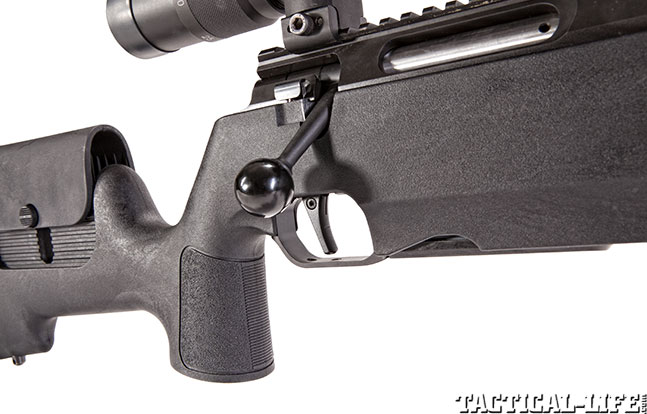 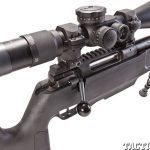 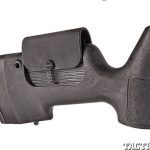 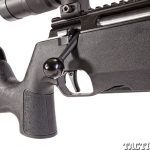 The SSG 3000 Patrol is a bolt-action, 7.62mm NATO rifle that feeds from a detachable box magazine. Two barrel lengths are available: 23.5 or 18 inches. The SSG 3000 Patrol’s barreled action and magazine are imported from Germany and mated to an American-made stock. A .22 LR conversion kit is available as a special order for training, but with an MSRP of approximately $1,600 due to low production quantities, it’s certain to be a rarity.

Two things account for the lower MSRP of the SSG 3000 Patrol: switching from the McMillan stock on earlier models and production efficiencies realized in Germany being passed to the consumer. There are some slight changes to the rifle itself from earlier SSG 3000s: The Picatinny rail is now integral to the receiver (versus a dovetail-mounted rail), and the barrel has 5/8×24-tpi, instead of metric, threading.

“The SSG 3000 Patrol’s barreled action and magazine are imported from Germany and mated to an American-made stock.”

The stock is the most significant difference between earlier models and the SSG 3000 Patrol. Rather than using a McMillan adjustable stock, the Patrol version features a simplified but still highly functional stock. Both the McMillan and the Patrol stocks use aluminum pillar block bedding and free-float the barrels, but the McMillan has a full-length accessory rail under the forearm to install palm rests, bipods or slings, and the stock can be adjusted for left/right cant at the buttplate. The McMillan also has a cheekpiece that is adjustable using a thumbwheel, while the Patrol version uses dual spring-loaded buttons that can be adjusted in quarter-inch increments. The cheek-height adjustment range is 2 inches, which should allow for the use of a large number of scopes and mounts. Both stocks can be adjusted for length of pull using spacers on the butt.

The new Patrol stock has a tapered forend intended to allow for quick elevation adjustments by moving the stock forward or rearward when resting it on a sandbag. Other features on the new stock are two integral, quick-detach mounting points for a sling, a rear underside hook for bracing the rifle with the support hand, two forward studs for attaching a sling and a bipod, and 3 and 9 o’clock sockets on the forend for mounting rails.

The SSG 3000 Patrol’s receiver is made from a single billet of steel to help ensure rigidity, and it features an integral, 0-MOA Picatinny rail for scope mounting. The forged barrel is mounted to the receiver and is easily removable using a wrench supplied with the rifle. Three 5mm Allen-head screws mounted on the bottom of the receiver hold the barrel in place. The front screw holds an indexing key that aligns with a slot in the barrel, while the two rear screws apply tension to the receiver ring, which clamps around the barrel extension. Though the barrel mounting system does not provide the tactical advantage of a quick detach/reattach capability like a true breakdown rifle, it could save you some gunsmithing expenses if the barrel needs to be replaced.

The SSG 3000 Patrol uses a one-piece forged bolt that locks into the barrel extension using two rows of three lugs on the front of the bolt. The striker cocks when the action is unlocked, and the bolt throw is only 60 degrees, which is among the shorter throws available. A shorter travel allows the operator to run the bolt quickly to reload. The rear of the striker is painted red and acts as a cocking indicator. The ejector is a plunger type similar to the Remington 700’s, and the rifle feeds from a single-stack, five-round magazine using the “push-feed” method. Sig Sauer plans to offer a 10-round magazine as well. The standard magazine fits almost flush with the stock, and the magazine release button is located just ahead of the magazine. It’s easily activated by sliding the index finger on the support-hand rearward.

“… while it’s designated the “Patrol” version, this rifle is clearly suitable for police sharpshooters, not just patrol officers.”

One of the best features of the SSG 3000 Patrol is its two-stage trigger, which is adjustable to better fit the shooter. Shooters can adjust the trigger take-up, let-off position and reach. The amount of take-up and the let-off point are adjustable using one of two Allen screws located ahead of and behind the trigger shoe. The trigger’s position is set by loosening an Allen screw on the side of the trigger shoe and sliding it forward or rearward. Easily adjusting these features, especially the trigger reach, to fit the operator is a huge advantage—just ask any serious rifle shooter.

The trigger pull weight is set at the factory to 3.5 pounds, though my test rifle’s trigger weighed 3.75 pounds according to my Lyman electronic gauge. The first stage measured 2 pounds, leaving just under 1.75 pounds for the let-off stage. Lighter triggers contribute to better accuracy, but so does a short lock time. The SSG 3000 Patrol’s light firing pin and short striking length minimize lock time. The trigger weight can be adjusted by a Sig Sauer armorer down to a minimum of 2.8 pounds. Don’t touch it on your own, as the screws used to adjust the trigger weight are sealed with red varnish and tampering with them will void the warranty.

The SSG 3000 Patrol has a distinctive safety that, when applied, locks the trigger, trigger stop, firing pin shoe (the part at the rear of the firing pin) and bolt. This is much more secure than safeties that lock the trigger only or which disconnect the trigger from an unlocked firing pin. Activating the safety is done by pressing downward with the right thumb on a button positioned behind the bolt handle on the right side. When engaged, the safety button extends about 0.38 inches into the triggerguard just ahead of the trigger; pushing upward disengages it.

My test SSG 3000 Patrol came with a 23-inch, tapered, medium-profile, cold-hammer-forged barrel with a removable flash suppressor. Sig also offers 18-inch barrels that will save you half a pound in weight, but they only come with thread protectors. The barrel features 5/8×24-tpi threading to accommodate a sound suppressor. The flash suppressor, which also serves as a compensator, has five 1.75-inch-long cutouts on its top portion. It has no cutouts on the bottom to avoid a dust up while firing from prone (which could give away your position) and to reduce muzzle rise. The barrel has four-groove rifling, and its 1-in-11-inch, left-hand twist rate is commonly used for 168-grain, 7.62mm NATO cartridges. Earlier SSG 3000 rifles had 1-in-12-inch twist rates, and future versions may have faster twist rates, as loads using heavier, longer bullets are becoming more popular.

The rifle’s metal parts are finished in black oxide, and the triggerguard and magazine are also made of steel—a nice touch given the “plasticizing” of these parts on so many rifles. While not supplied with a test target, the SSG 3000 Patrol is guaranteed to shoot sub-MOA using match-grade ammunition. 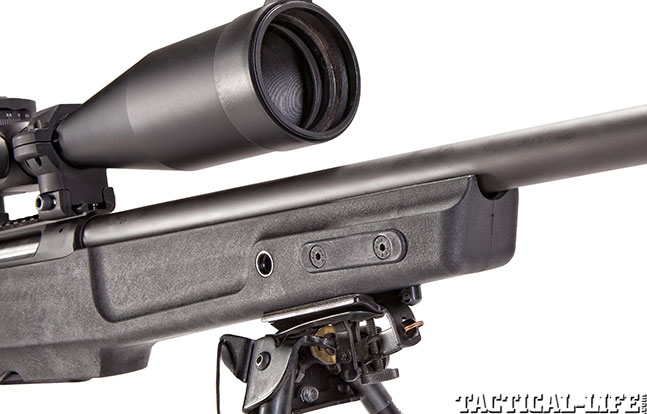 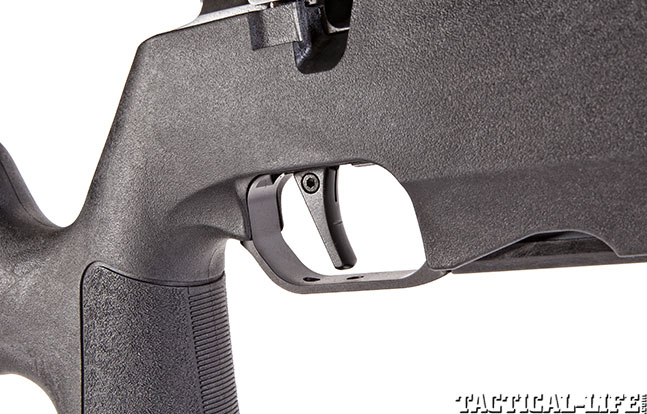 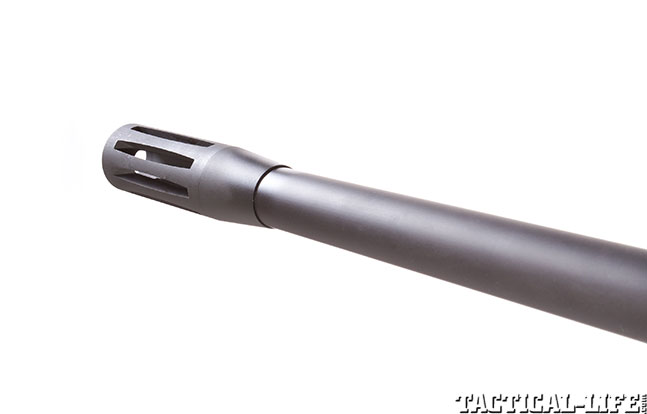 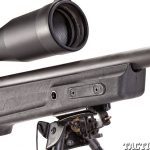 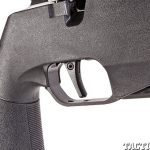 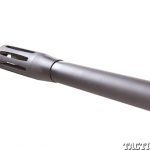 Without question, this rifle is highly accurate, and I believe the groups could haven shrunken slightly had I used Sig’s optional mirage band and eliminated the distracting heat waves emanating from the barrel. I tested the SSG 3000 Patrol’s accuracy at 100 yards using a Leupold 8.5-25x50mm Mark 4 scope and firing off a Caldwell rest and rear sandbag. The smallest five-shot groups measured 0.5 inches at the centers using Hornady 168-grain HPBT and Black Hills 175-grain HPBT ammunition. Hornady and Black Hills have well-deserved reputations for making high-quality, match-grade ammunition, but it was nice to discover the accuracy of newcomer Atomic Ammo’s 168-grain HPBT load. Using Nosler custom competition bullets and new, primed Lake City military brass, the Atomic load’s smallest group size measured 0.63 inches, and its average group size practically equaled that of the best-performing Black Hills load. And at a retail cost of about $1.30 a round, Atomic Ammo is priced considerably less than its competitors.

The rifle functioned perfectly; the action worked smoothly and rapidly. Reloading is also quick thanks to the location of the magazine release button just ahead of the magazine and easily reached by the support-hand index finger. The tapered forend of the stock and under-hook were very useful for shooting from sandbag rests.

On the downside, I found the recoil pad too stiff for my tastes and the mechanical safety not ergonomic because it did not easily disengage. Disengaging requires you to push upward on the button that protrudes downward just ahead of the trigger in the triggerguard. This requires a fair amount of effort, and you must completely break your firing grip if you are using your trigger finger. I used my support hand’s index finger to deactivate the safety. This method worked well when firing with the forend supported on a bipod or sandbag. It kept my firing grip on the stock, my head aligned with the scope and positioned my support hand close to the underside of the stock to steady it against the shoulder after placing the safety into the “fire” mode.

Though it’s fair to say that a 12-pound, 45-inch-long bolt-action rifle is not a “patrol” weapon, the SSG 3000 Patrol is definitely a very good police sniper rifle. Its barrel, trigger system and stock offer advantages usually seen only on rifles priced much higher. Combined with its accuracy and lifetime warranty, these features make the SSG 3000 Patrol a very good value for the money. 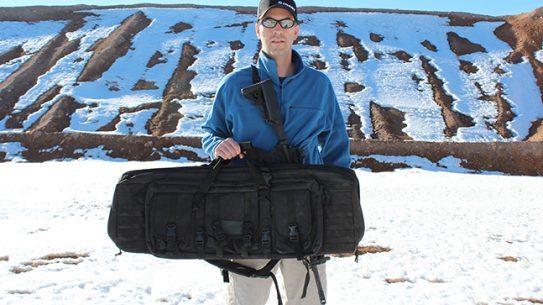 Checklist For Your Gear on Range Day

A checklist that ensures you're focused on the most important part of your range...