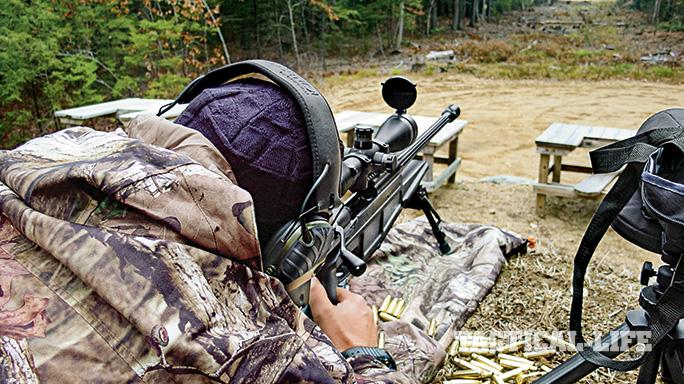 1 of 5
Gun Review: Sig Sauer’s Precision Bolt TAC2
The TAC2 was truly made to go the distance. While the 7.62mm NATO can hit the 1,000-yard targets shown, users can easily convert the rifle to .338 Lapua for greater accuracy at this range. 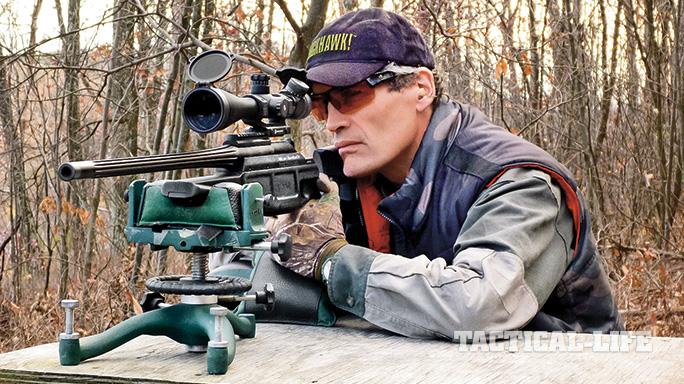 2 of 5
Gun Review: Sig Sauer’s Precision Bolt TAC2
The TAC2’s stock, with its adjustable buttpad and cheekpiece, makes it easy to shoot the rifle accurately from benchrest and prone positions. 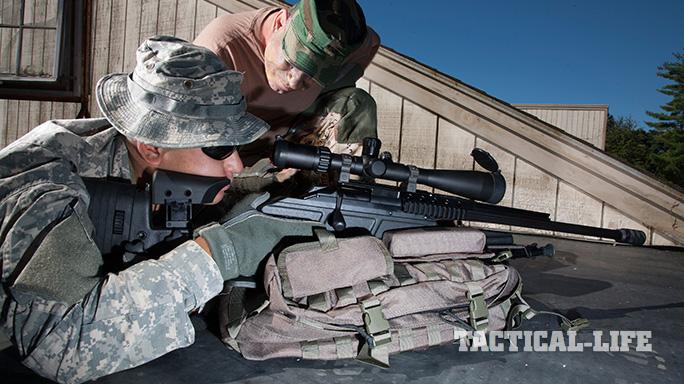 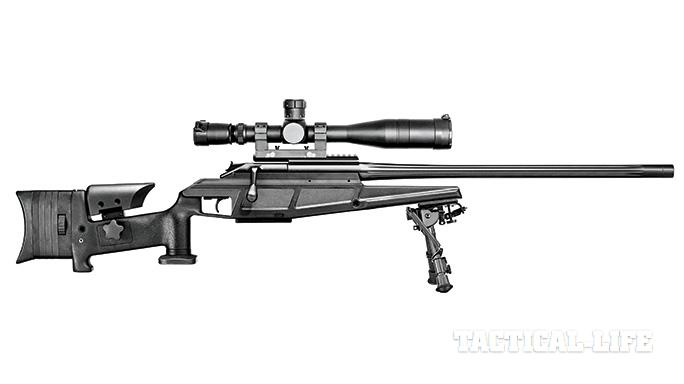 4 of 5
Gun Review: Sig Sauer’s Precision Bolt TAC2
The TAC2’s stock has four sockets for quick-detach sling swivels, and users can quickly attach a bipod (not included), for enhanced stability and precision. 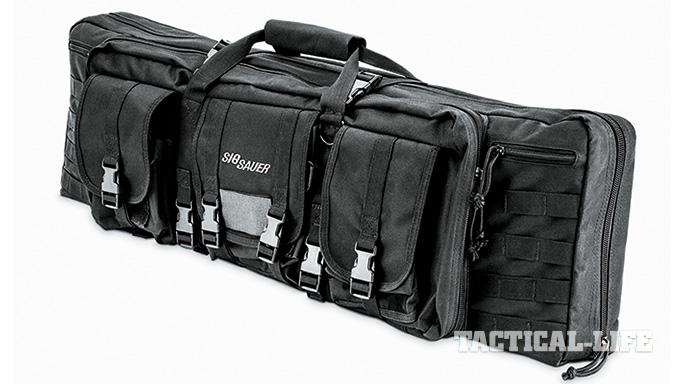 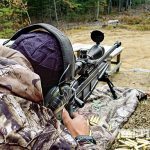 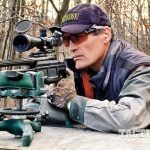 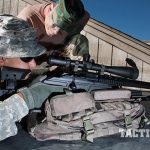 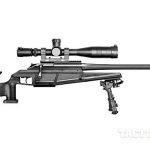 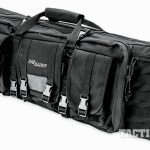 Though the recent focus in the arena of law enforcement rifles has been on a patrol rifle for each squad car and using ARs instead of 9mm submachine guns on entry teams, bolt-action sniper rifles will always have a leading role on tactical teams. Sig Sauer offers three tactical bolt-action rifles—the SIG50, the SSG 3000 and the TAC2—to cover a wide range of mission profiles.

Of the three, the TAC2 is unquestionably the most mission and operator flexible for several reasons. The rifle is easy to assemble and take down, and users can change barrels and calibers without special tools or a change in zero. The rifle also has a highly configurable stock and can be operated from the left- or right-hand side. Moreover, the TAC2 is the only Sig Sauer straight-pull bolt action (and it’s one of only a few made anywhere). Blaser, a sister company of Sig Sauer, makes the TAC2 in Germany. Two chamberings are currently being imported—7.62mm NATO and .338 Lapua Magnum—the former of which I recently tested.

The TAC2’s straight-pull design has unusual mechanics. The lockup between the bolt and barrel is not conventional, where locking lugs on the bolt rotate into recesses in the barrel extension or receiver. With this rifle, lockup is accomplished by the expansion of a 360-degree collet that surrounds the bolt. The collect has 14“fingers” just behind the front of the bolt that center themselves and expand outward when the bolt is moved to its forward-most position. These fingers fit into a circular recess in the barrel extension. Pulling the bolt handle rearward unlocks the action by retracting the collect fingers inward, towards the center axis of the bolt. Unlike most straight-pulls, there is no radial movement of any parts or shearing action in locking or unlocking the bolt. This makes the action cycle with much less force applied to the bolt handle.

“It has a very rapid straight-pull action and added features that make it one of the more flexible platforms available.”

Careful engineering is also demonstrated in the ambidextrous safety, which is mounted directly on the rear of the bolt. Applying it decocks the striker and locks the firing pin away from the primer, making the TAC2 completely drop safe and safer to carry with a loaded chamber than many other designs.

The stock and receiver can support multiple calibers that can be changed in the field. All that is needed is a different barrel and magazine, and, depending on the caliber you wish to change to, a different bolt head. Because the collect is self-headspacing, barrels can be installed or changed in the field without gauges. Attaching a barrel is simply a matter of placing it into the bed of the receiver and using the supplied Allen-head wrench to tighten two screws. No torque wrench is required. Changing calibers is slightly more complex and requires changing the bolt head (all that’s needed is your fingernail or knife to unlock it) if you switch to a caliber outside a one of four caliber groups: “Mini” for 5.56mm NATO, “Standard” for 7.62mm NATO, “Magnum” for .300 Winchester Magnum, and “Lapua” for .338 Lapua.

The TAC2 can be taken down in less than two minutes into the barrel (24.7 inches long) and stock (27.63 inches with the quick-detach buttplate removed). Thus, the rifle, bipod and suppressor can conceivably fit into a case 30 inches long and 12 inches tall. That’s about the length of a 20-inch-barreled, 7.62mm AR separated at the receiver with its stock collapsed.

Rifles with quick-change barrels generally tend to have a problem with maintaining a precise zero once the barrel is removed. But that’s not the case with the Sig Sauer TAC2 because the scope is mounted to a Picatinny rail attached to the barrel, not the receiver.

The receiver is made from aircraft-grade aluminum that has been hardcoat anodized, while the recoil lug is made of hardened steel. The TAC2 has a 24.7-inch, cold-hammer-forged barrel with four-groove, 1-in-11-inch-twist rifling. The barrel has 10 longitudinal flutes to reduce weight, features 18×1 threading for mounting a suppressor or muzzle brake and comes with a thread protector. Sig Sauer offers an optional six-chamber muzzle brake. The barrel is coated with a nitride finish inside and out for corrosion and abrasion resistance. I actually saw this finish’s durability put to the test at the Sig Sauer Academy when instructor Scott Kennelson proceeded to rake a knife’s blade across the barrel of a TAC2 several times without leaving any visible marks.

The TAC2 is adaptable to different riflemen. It comes standard with a right-side bolt handle and right-side ejection. However, with optional parts, it can be configured with the bolt handle on the left side and ejection towards either side. My preference as a right-handed shooter is for right-side ejection with a left-side bolt handle. This makes multiple-shot engagements when firing from a supported position far more rapid because the operator’s firing hand remains properly positioned on the rifle while the support hand runs the bolt.

The TAC2 uses a sturdy, single-column, five-round, detachable box magazine. The shell is polymer, and a stainless steel insert that functions both as the retaining lips and as a guide for the follower extends into the magazine surrounding the cartridges. The magazine drops free into your palm by pushing two release buttons located on both sides of the stock.

The injection-molded composite stock offers multiple adjustments to help fit the rifle to each shooter. A proper fit allows the shooter to quickly mount the rifle with their dominant eye centered behind the scope with the correct eye relief. To facilitate this fit, the rear stock is adjustable for buttplate height, length of pull, cheekpiece height and cheekpiece offset. A thumbwheel adjusts the buttplate up or down. The buttplate also has four 0.38-inch spacers that can be removed to adjust the length of pull, which helps establish correct eye relief. Finally, the cheekpiece is adjustable for height and offset from the comb.

The forend has a flat bottom and is tapered to allow for quick vertical positioning by sliding the rifle forward or rearward when rested on sandbags. It also has a recessed steel rail for mounting a bipod or sling. The stock’s grip can be used for support because it has a wide flat bottom that adds stability when placed against a surface below the rifle. Its height is adjustable by a half-inch using two spacers. For supporting the rifle at the rear, there’s a mounting point for a monopod. Finally, the stock has a hook under the rear where you can use your support hand to press the rifle into your shoulder.

Aside from a stock that fits the shooter, an important consideration for precision marksmanship is trigger finger placement. The TAC2 has a single-stage trigger that can be adjusted by the user without removing the action from the stock. The trigger blade is relatively wide, smooth and curved. Users can adjust the trigger’s position (forward or rearward), pull weight and overtravel. The minimum pull weight is 2.2 pounds. I tested the TAC2 with a pull weight at just over 3 pounds. The trigger breaks very cleanly with no take-up, minimal movement during the break and no overtravel.

I tested the 7.62mm TAC2 at 100 yards using a Leupold 8.5-25x50mm Mark 4 scope and a Caldwell BR rest with a sandbag positioned under the grip. The smallest five-shot groups, measured from the centers of the shots, were 0.38 inches (Hornady 168-grain A-MAX), 0.56 inches (Black Hills 175-grain HPBT) and 0.75 inches (Brand A 147-grain HPBT). The mean group size for every load was under 1 inch. Noteworthy were several groups shot using the Hornady load where four of the five shots touched to make 0.5- to 0.63-inch groups with a fifth flyer widening the group. A few of these flyers were operator error and sometimes caused by the pulse in my cheek transmitted to the rifle. This was evident thanks to the power and clarity of the Leupold scope, which made detection of even the slightest movement apparent. If we remove my pulse from the equation, the TAC2 likely groups under 0.75 inches all day long with the Hornady 168-grain A-MAX ammo. Given the 1-in-11-inch-twist barrel, however, the TAC2 may perform better with 158-grain loads, which were not available at the time of testing.

The TAC2 functioned perfectly, and the straight-pull action lessened recovery time between shots, as did the tapered forend, which allowed me to push the rifle forward on the sandbag and reestablish the correct elevation. Perceived recoil is minimal.

There are several highly accurate bolt-action tactical rifles made on a production scale. Only a few, however, are takedown rifles with quick-change barrels. The TAC2 is one of them, but it has a very rapid straight-pull action and added features that make it one of the more flexible platforms available.

Editor’s note: As this article went to press, TW editors learned that TAC2s are no longer being imported from Germany, but you can find them at gunsamerica.com, gunbroker.com and select firearms retailers. To find a Sig Sauer retailer near you, visit sigsauer.com/dealerlocator. 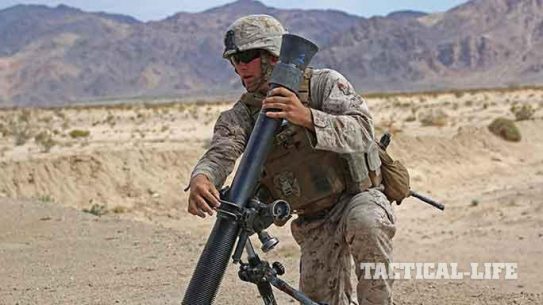