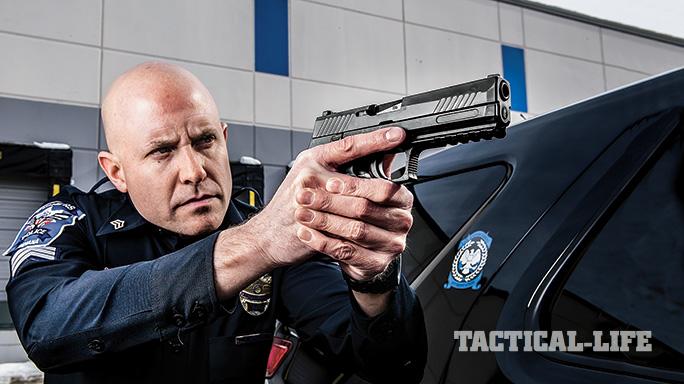 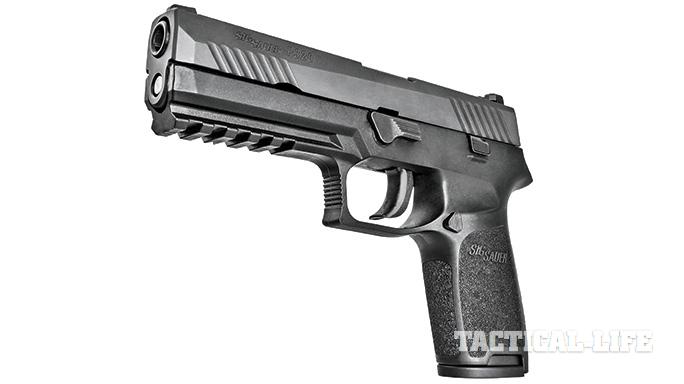 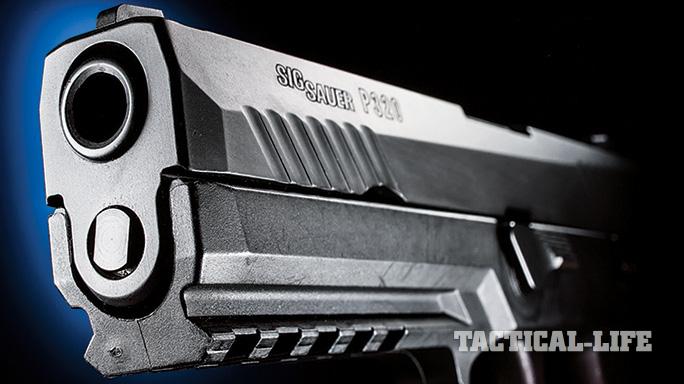 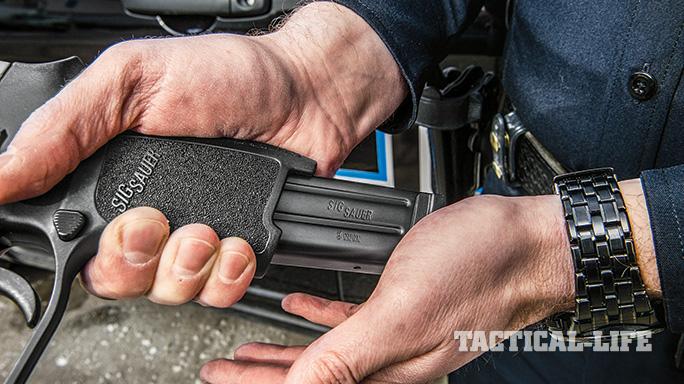 4 of 7
Gun Review: Sig Sauer’s Striker-Fired P320 9mm
The grip, textured for a secure hold, has cutouts at the bottom on both sides that make it easy to remove magazines. 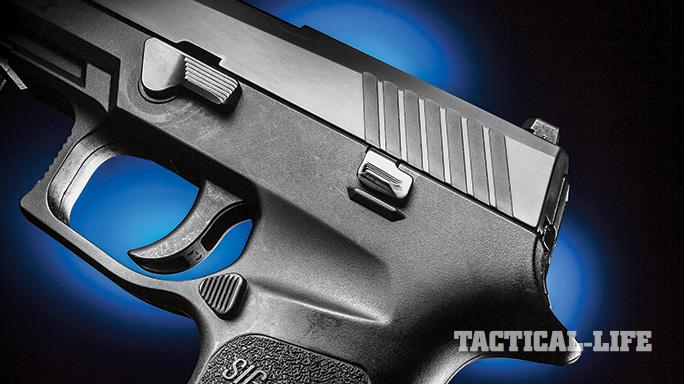 5 of 7
Gun Review: Sig Sauer’s Striker-Fired P320 9mm
The slide stop is in a position similar to Sig’s other pistols, making it easy to charge the P320 with just one hand. 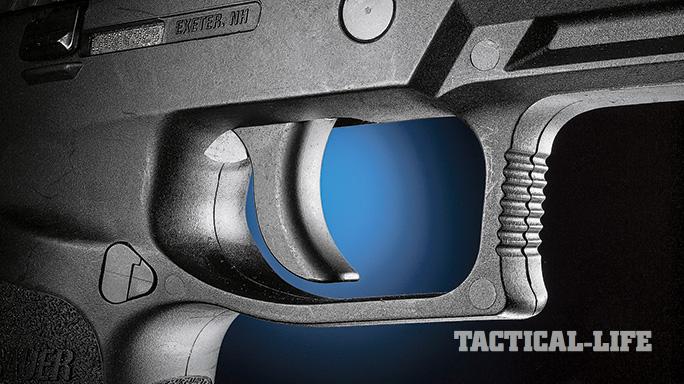 6 of 7
Gun Review: Sig Sauer’s Striker-Fired P320 9mm
Sig Sauer offers the P320 with or without a safety toggle in the face of the trigger. Either way, the pistol will pass a drop test. 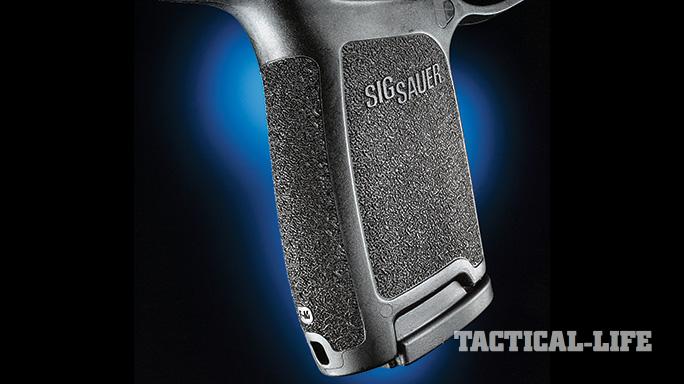 7 of 7
Gun Review: Sig Sauer’s Striker-Fired P320 9mm
The grip, textured for a secure hold, has cutouts at the bottom on both sides that make it easy to remove magazines. 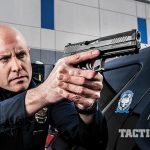 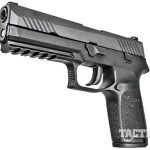 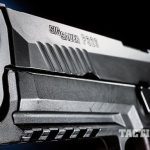 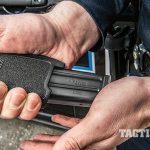 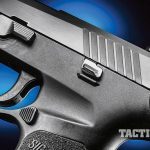 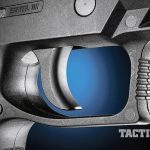 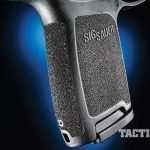 It is common these days to lump the needs of law enforcement into everyone else’s, especially with guns.

The truth is, police officers use their weapons differently. Specifically, I am referring to how the guns are used, and how they may be configured to facilitate that use. This also applies to maintenance and how agencies issue them. Police officers “may” be able to buy their own pistols, but in most cases that is not true. Pistols are often chosen based on a department’s needs, and it can apply to thousands of officers. They are chosen based upon policy considerations, ease of training and simplicity of supply and maintenance.

Weapons are passed down to officers in some cases over decades. They must accommodate officers ranging from the short to very tall, with hands ranging from tiny to, in my case, “bear paws.” Officers come in all kinds of shapes and sizes with various abilities to control recoil, or properly hold and control various calibers. Of course, officers are also tasked with maintaining their pistols, as few agencies will clean or maintain every single weapon—nor should they. Experience and aptitude between officers can range from truly expert to barely capable. So duty pistols become the very definition of compromise, with systems that provide the most versatility being the most desirable. The days of “Here is your pistol, now deal with it” are just about over. As a department trainer or armorer, it is your job to ensure every officer’s competence, and that means flexibility. The better the weapon system facilitates that, the easier your job will be.

Most officers will carry their issued pistol on- and off-duty. It will spend 10 to 12 hours a day in the elements, exposed in a duty holster. The pistol is also immediately observable by the public, becoming a common target for dedicated criminal predators. Depending on policy, the sidearm will be carried all the time when off-duty, or at least be readily available, meaning concealed carry in every weather condition. Some agencies will issue two pistols, but that is pretty rare, and most officers can’t afford a dedicated off-duty pistol. In many cases, policy simply won’t allow it, making individual preference all but a pipe dream.

So, considering all of this, it’s very difficult for manufacturers to meet the needs of the law enforcement market. It also means they will build weapons around those needs, with consideration outside the police world becoming secondary. Believe me, it’s not personal; it is just the way the market works. If you are a large company having spent decades supplying pistols to the police market, it is a must. There may be no better example than striker-fired pistols, which are extremely popular in law enforcement in general, especially among larger departments. If you intend to supply pistols in any large number, you are going to need to make one. And Sig Sauer has stepped up to the plate with its own striker-fired pistol, the P320.

Sig Sauer has supplied pistols to the police and military worlds for decades, but is is kind of late to the striker-fired pistol party. For those agencies requiring a decocking pistol, Sig Sauer remains a leader in the field. The company’s double-action-only, hammer-fired pistols bridge a gap, but Sig Sauer needed a striker-fired pistol. Many of its clients were clamoring for one, so it took all of their requests into account and developed the P320, which is geared towards the needs of a police department and those that issue and maintain them.

Sig Sauer built the P320 from the ground up based on requests from the police and military worlds. Rather than provide a molded-in fire control system, the company opted to make it removable. Remove the slide, turn the takedown -lever and it comes right out—no tools are necessary. This allows the same serialized fire control system to be placed in -several grip frames. Frames are available in small, medium and large grip sizes. Currently, Sig is offering Full-Size, Carry, Compact and Subcompact models of the P320 with 4.7-, 3.9- and 3.7-inch barrels.

While an officer probably won’t swap their grips or slides when going off-duty, this modularity does mean an officer becoming a detective can just change their P320’s grip and slide, for example, saving a lot of money for the department. Sig is currently offering the P320 in 9mm, .40 S&W and .357 SIG, with .45 ACP coming later. Some officers find the .40 S&W harder to handle; an armorer could just swap the P320’s slides and magazines for a different chambering, all of it at the range if needed. Conceivably one officer could maintain the same serial number throughout their entire career. At the macro level, this could be a nice feature for agency armors.

P320s can be configured with safety configurations to meet most agency needs. The fire control system passes drop tests with or without a trigger-mounted safety toggle. Agencies that require trigger safeties can get them installed, while others can leave them off, providing a smooth, metal trigger. The trigger has a distinct reset, with little take-up and a crisp break at around 6 pounds. The P320 also has an ambidextrous slide release, and the magazine release can be switched easily to either side. For those requiring a magazine disconnect safety (i.e., the pistol will not fire without a magazine inserted) that is also available. You can even get a thumb safety if your agency requires an external mechanical safety.

“The P320 may be the most versatile system on the market, allowing users to swap out the frame, slide and barrel in multiple calibers.”

Sighting is accomplished using Sig’s excellent set of SIGLITE night sights. Along with tritium inserts, the dots are large and easy to see. A pronounced ledge on the rear sight facilitates unconventional reloads. The P320’s magazines are metal, and a cutout in the grip allows you to pull downward on a loaded magazine in case of a malfunction or to make sure it’s properly seated. A Picatinny rail molded into the dust cover accommodates lights and lasers.

There is no need to press the trigger to disassemble the pistol for cleaning, a feature critical to many agencies. Remove the magazine and lock the slide back. Turn the takedown lever completely, and the slide comes right off. Repeat in reverse to reassemble the pistol. You cannot turn the takedown lever with a magazine in the pistol (loaded or not), making it one of the safest and easiest-to-maintain striker-fired pistols yet in my opinion.

Sig Sauer sent me a first-production, 9mm Full-Size P320 and three 17-round magazines. I added my SureFire X300 Ultra tactical light with the DG switch that fit my P226 SAO, since it fit in the same holster. In the end, I ended up testing the P320 with several lights, including those from Streamlight, along with a couple of lasers.

Off-duty holsters are available in generic leather and Kydex; most made for the P250 will work. Duty holsters specifically made for the P320 are in the works. Equipped with the X300, the P320 dropped into my G21 Safariland ALS holster, but it would just not lock in. So I grabbed a G22 SLS holster; it fit perfectly with a gentle nudge from my heat gun. This is what I used for all of the testing, most of which was completed in full kit.

Starting by engaging multiple targets, the P320 was pretty darn fast. The trigger reset is just a tad longer than my usual single-action pistols, but once I was accustomed to it, it was very controllable on multiple-shot strings. The recoil was manageable—a bit more pronounced than a steel pistol, but better than most polymer-framed pistols. The grip is stippled about right for most. I’d prefer a bit more aggressive texturing, but that is a personal preference. The P320’s beavertail is somewhere between the Elite frames and standard Sig pistols. Long a fan of Sig’s slide release placement, this pistol facilitates really fast reloads. There’s no shifting in your hand, no slingshot needed unless you want to. Due to the construction of the grip frame, it was easier for me to reload the P320 quickly than with any other Sig pistol. The P320 really shined when shooting single-handed during transition drills and from unconventional positions.

The P320’s accuracy was as expected—stellar. Sig pistols have always been accurate in my hands, and this one was no exception. During testing, the best group came from Black Hills’ 115-grain TAC-XP +P ammunition, which measured just over an inch at 25 yards. The pistol seemed to favor +P ammunition, with the DoubleTap 115-grain Nosler coming in at a very close second place.

Shooting the P320 side by side with my P226 SAO, it was very difficult to tell the difference. In fact, the triggers felt very similar. The reset on the P320 is tactile and predictable. Take-up is limited, and it breaks more like a single-action trigger than most striker-fired guns. Having what amounts to a standard metal trigger was really nice for me. It really lent itself to excellent accuracy.

Moving to more common self-defense ranges, the P320 was as accurate as a combat pistol gets, cutting one large hole from off-hand at 7 and 10 yards. Shooting on the move, it was really accurate, easy to control and fast on target. Its grip angle is more in line with a 1911’s, suiting me very well. Over the course of a long day, there were no malfunctions at all—something you expect from Sig Sauer.

The P320 may be the most versatile system on the market, allowing users to swap out the frame, slide and barrel in multiple calibers. Maintenance is simple and safe. The platform can be configured to meet any need an agency may have. If you want to interchange slides and the like, you can do so without needing a whole new pistol.

I own several of the most popular striker-fired pistols, and I’ve had to modify all of them. After a solid 700-round day with the P320, I might consider changing the sights, but that’s it. Those agencies fielding Sigs now looking for a polymer pistol will like the P320. Those looking for an alternative may like it just as well. Either way, it is a fantastic pistol suitable for any department or individual officer. 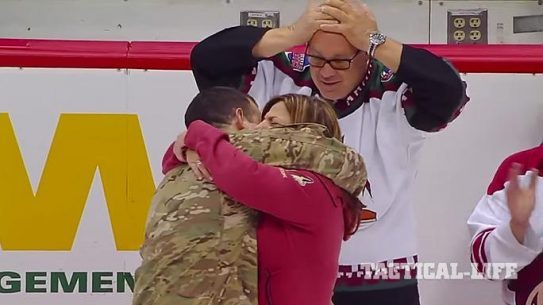 Eitan and Ronit Urman got the surprise of a lifetime when they went to...