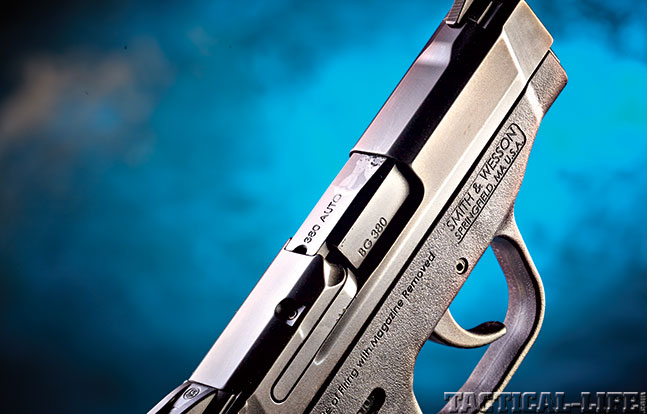 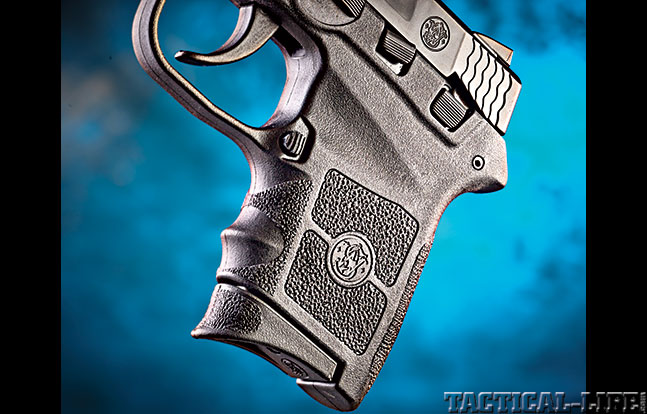 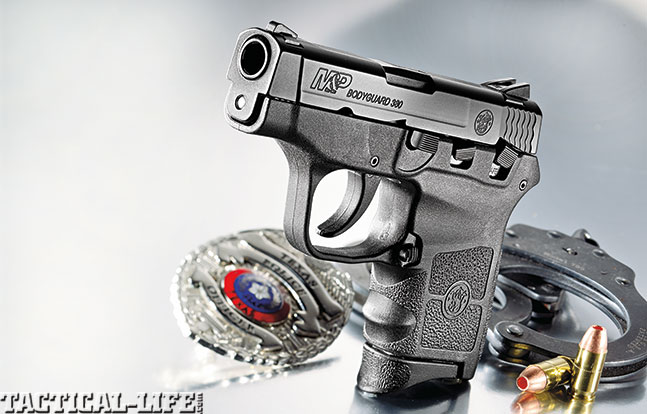 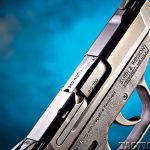 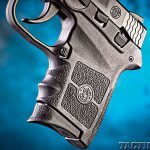 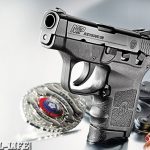 The idea of being ambushed, disarmed and without the ability to do anything but wait for the executioner’s bullet is a frightening scenario that I swore to never participate in when I had a sheriff’s star pinned to my uniform many years ago. Over the years, the uniform and badge changed, but
not a single shift started without at least one backup gun being concealed on my body.

The backup gun has been described in many ways, but likening it to a fire extinguisher is probably the best analogy I can think of. It is a tool used in a grave emergency that can literally save your life. You may carry it for years and never need it, but should it become necessary, no other tool will substitute.

For years, many cops, including myself, carried J-Frame revolvers from Smith & Wesson as backup guns. The little guns were fairly easy to conceal and utterly reliable. Now the same company is offering law enforcement officers another good option for backup duties: the M&P Bodyguard 380.

If the pistol sounds familiar, it probably is. Smith & Wesson introduced the original Bodyguard 380 a few years back. It has been a good seller for the company, and many have found their way into the hands of patrol cops. However, in addition to some minor styling changes, the M&P Bodyguard 380 differs from the original in that it lacks the internal laser-aiming unit.

Some law enforcement agencies prohibit the use of lasers on firearms. For example, one notable West Coast department allowed the use of the Bodyguard 380 as a backup gun, but only if the officer had the internal laser disabled by a department armorer.

Including a laser in every gun added to the total cost of the original Bodyguard 380. While the price of the original gun was not prohibitive to most shooters, it was a wasted expense for officers not wanting, or not allowed to have, an internal laser on a backup gun. By offering a pistol without that feature, Smith & Wesson now has a gun that is available to officers who could not purchase the pistol due to department policy or home budgeting concerns. 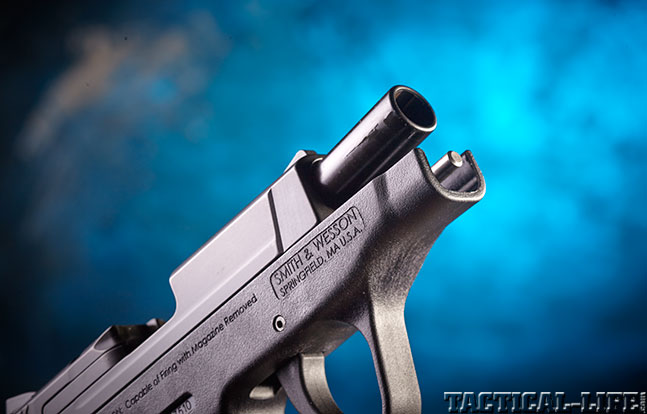 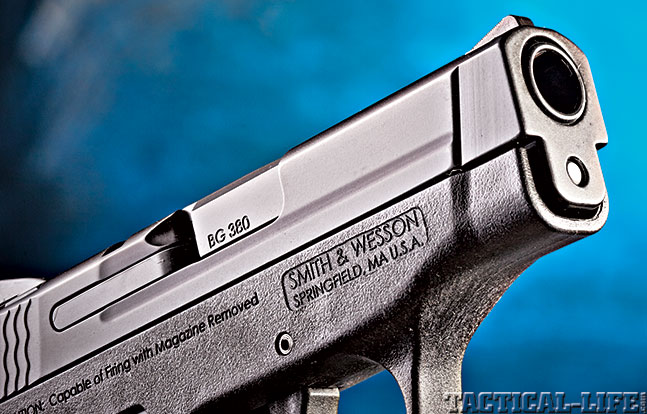 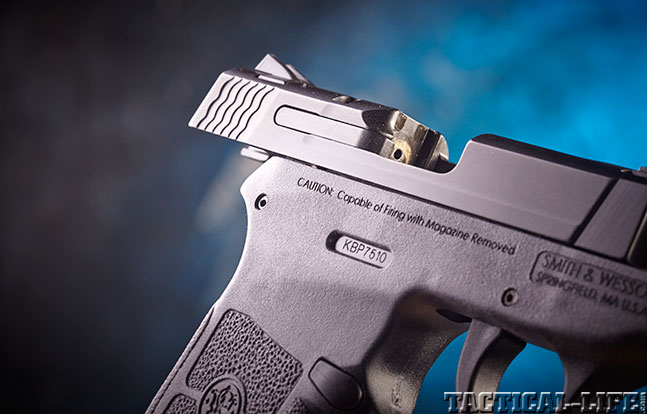 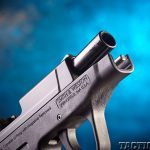 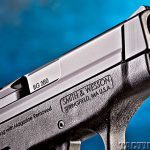 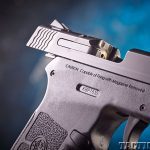 The M&P Bodyguard 380 is a subcompact pistol designed for concealed carry and backup gun duties. As the name suggests, the handgun is chambered for the .380 ACP cartridge, and it holds six rounds in the magazine.

The gun uses a polymer frame and is hammer fired. The trigger pull is long and somewhat heavy to reduce the risk of unintentional discharges. There is a fair amount of take-up and no overtravel.

A manual thumb safety is mounted on the left side of the frame. I was concerned that the safety would be difficult to disengage, and that a shooter might accidentally engage the safety when handling the gun. However, I found that the opposite was true. While small, I found the thumb safety snapped into the firing position easily with a sweep of my thumb. But, when in the firing position, I found it extremely difficult to engage the safety without turning the gun in my hand and making a conscious effort to push it up into the “safe” position.

Smith & Wesson ships the M&P Bodyguard 380 with two magazines. One has a flush-fitting floorplate while the other is slightly extended to allow the officer to get two full fingers around the grip of the pistol. The extended magazine does not add much height to the outline of the gun, and I chose to use this magazine exclusively when carrying it. Neither magazine floorplate will allow most officers to get their pinky  finger around the grip.

One of the gun’s major selling points is that it, like the original Bodyguard 380, is very thin. The pistol is easy for a uniformed or plainclothes officer to conceal in an ankle holster or in a pocket. For uniformed officers, there are a variety of holsters designed to attach to soft body armor. One of these would work well with the Bodyguard.

I tested the M&P Bodyguard 380 with the Advanced Ankle Holster from Elite Survival Systems. I found the gun was extremely comfortable to carry for long periods of time with this rig. Due to the very flat nature of the pistol, it virtually disappeared and was undetectable to the average observer. The Bodyguard was nearly invisible when carried in a pants pocket, a popular backup
gun location for plainclothes assignments.

Unloaded, the M&P Bodyguard 380 weighs a mere 12 ounces. Loaded with seven rounds, the gun was a little over 14 ounces on my postal scale. As a guy who has carried both a S&W 642 (15 ounces unloaded) and a Glock 27 (22 ounces unloaded) as a backup, less than 15 ounces for a fully loaded pistol has its appeal.

Sights on subcompact pistols range from nonexistent to near-duty size. Many of the guns that are similar in size to the M&P Bodyguard 380 have sights that are hard to find under stress. Smith & Wesson outfitted this pistol with usable sights, though they are not perfect. The black front sight is easy to lose on a dark target or in low light. I would have preferred to see a white dot, a fiber-optic rod or some other reference used in the front sight for faster acquisition.

Fortunately, the sights are dovetailed into the slide. This allows the officer to swap out the factory sights to an aftermarket set. XS Sight Systems offers the company’s Big Dot Tritium Express set for the Bodyguard 380 pistols. The front sight in this set has a large white circle surrounding a tritium vial to give the officer a fast sighting system in all lighting conditions.

Some people might argue that a backup gun like the M&P Bodyguard 380 is designed for point shooting. While I agree that most confrontations happen up close and fast, not all do. An officer may be thrust into a situation where a precision shot with the backup gun will be required. In that case, sights are mandatory for making the shot.

When compared to the traditional small-frame revolver, the M&P Bodyguard 380 offers several benefits including ammunition capacity and size. The Bodyguard will give an officer seven rounds before needing to reload: six in the magazine and one in the chamber. Contrast that with the current-production backup revolvers that typically only have five rounds on tap.

Even though the capacity of a revolver is less than that of the M&P Bodyguard 380, they are still thicker. The cylinder of a revolver is thicker than the slide and frame of the Bodyguard. This means the revolver is more likely to be visible to the casual observer. Also, it means the cylinder can dig into the ribs or ankle, depending on where the gun is carried. 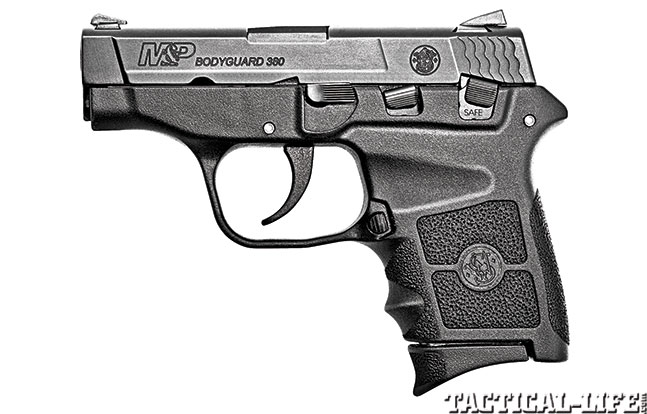 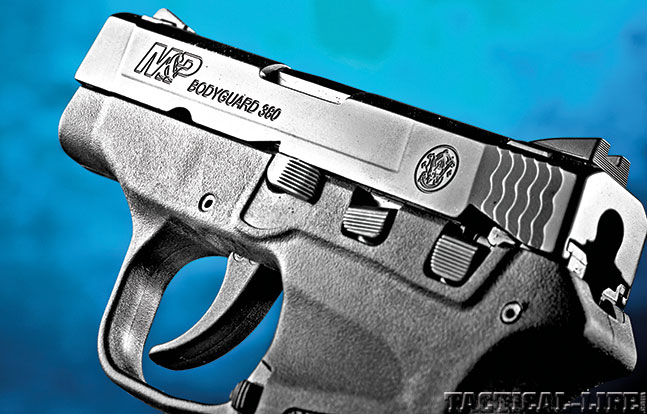 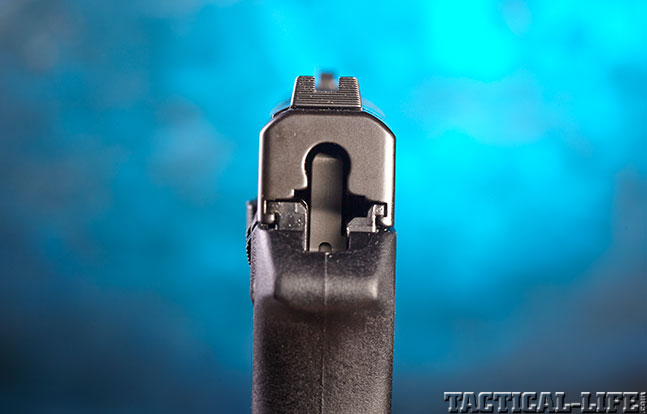 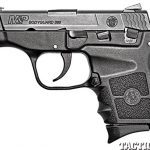 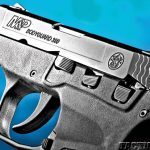 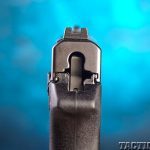 All of the features in the world will not make an unreliable pistol suddenly desirable. It is imperative that any gun carried as a backup be utterly reliable. The handgun could be the last line of defense in a violent encounter. It simply must work every time you pull the trigger. Based on my shooting, the M&P Bodyguard 380 seems to be that reliable.

My test pistol was 100-percent reliable. I shot six different loads: four self-defense loads and two full-metal-jacket (FMJ) loads. The gun fed, fired and disposed of each with ease. Considering the original Bodyguard 380 has been on the market for several years, I would expect the system to be thoroughly debugged. Nevertheless, it is always nice to take a new gun to the range and have it run without any problems.

A .380 ACP is not generally known as a harsh-recoiling round. However, if you make the gun light and thin enough, even it can be painful to shoot. I was happy to discover that the M&P Bodyguard 380 was not a harsh-recoiling pistol. The narrow edge of the backstrap does put a little sting into the web of the hand after about 100 rounds, but it is nothing that will bother anyone other than the most recoil-sensitive shooter.

Slide bite is always a concern for me when shooting small pistols. The term “slide bite” refers to a situation where the web of the shooting hand is lacerated by the slide due to a lack of appropriate spacing between the gripping area and the slide. I had no such problems with the M&P Bodyguard 380. I was able to get a solid, high grip on the gun without being “bitten.” I wish I could say the same about other guns I have had out on the range recently.

The gun’s accuracy was acceptable for its purpose. Shooting off-hand, I managed a best five-shot group of 1.5 inches at 7 yards with the Winchester 95-grain PDX1 load. From a rest, the results were very similar.

The M&P Bodyguard 380 makes for a good backup gun. It is thin, light and reliable. While a laser-aiming device might help aim the pistol more reliably than the plain black sights, the lack of a laser opens the M&P Bodyguard 380 to officers where department standards preclude its use.

Only time will tell if the M&P Bodyguard 380 supplants the J-Frame snubby as the backup gun of choice with many officers. Regardless, the pistol deserves a look from anyone who needs a backup pistol. If you don’t already, commit to training with and carrying a backup gun every day you go on duty. With quality, affordable pistols like the Bodyguard on the market, there are no valid excuses to not carry one. 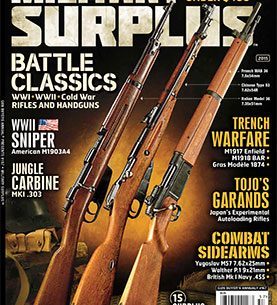 The idea of being ambushed, disarmed and without the ability to do anything but…