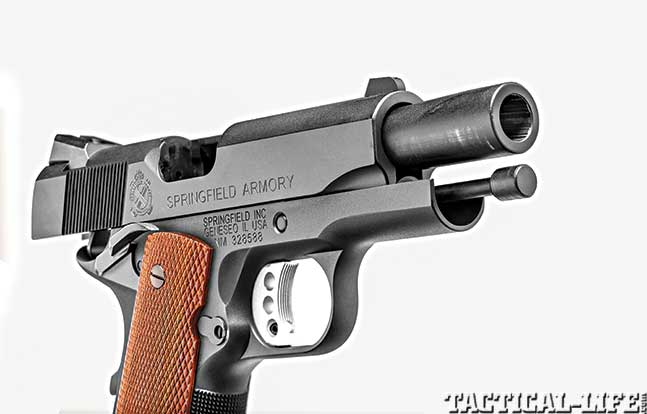 1 of 7
Gun Review: Springfield Armory’s TRP Compact
The pistol sports a bushingless barrel, a crisp trigger and a strong dual recoil spring assembly. At the range, it was 100-percent reliable. 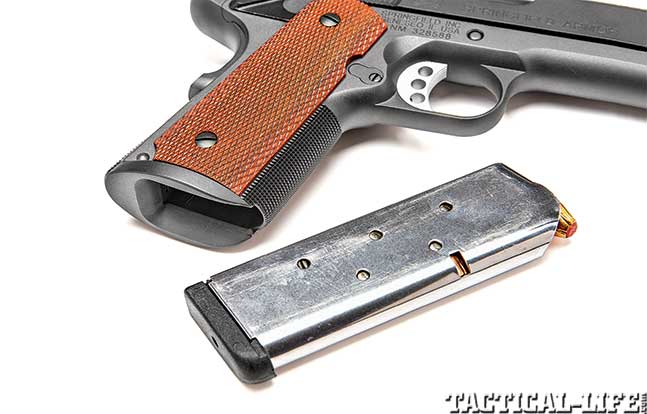 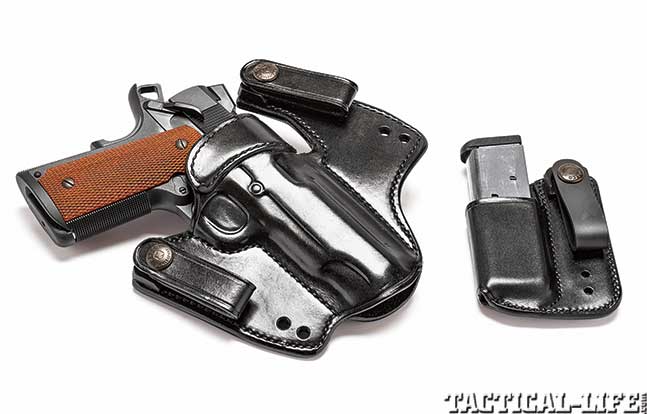 3 of 7
Gun Review: Springfield Armory’s TRP Compact
The TRP Compact .45 was born for deep-cover carry. The Galco V-Hawk IWB holster holds it close to the body while allowing for a clean presentation. 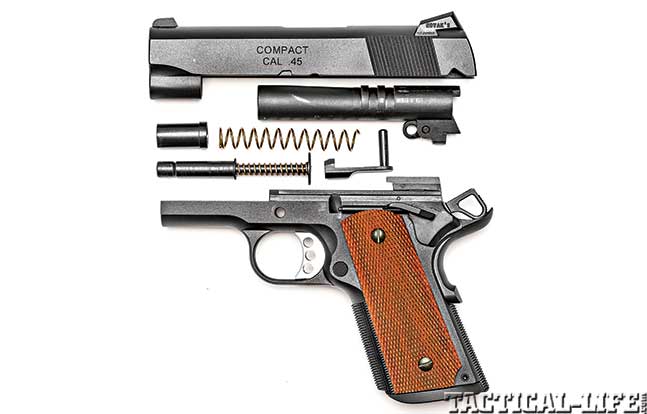 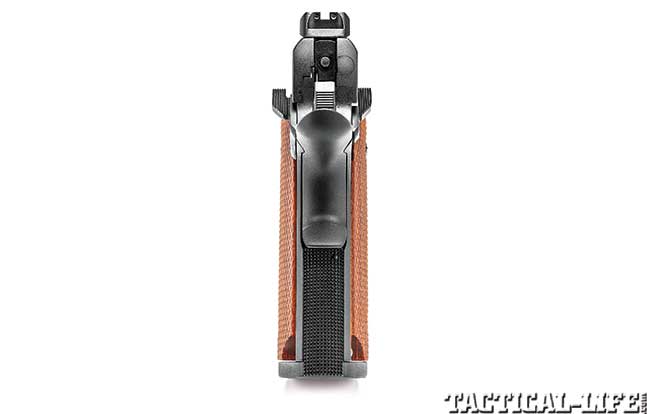 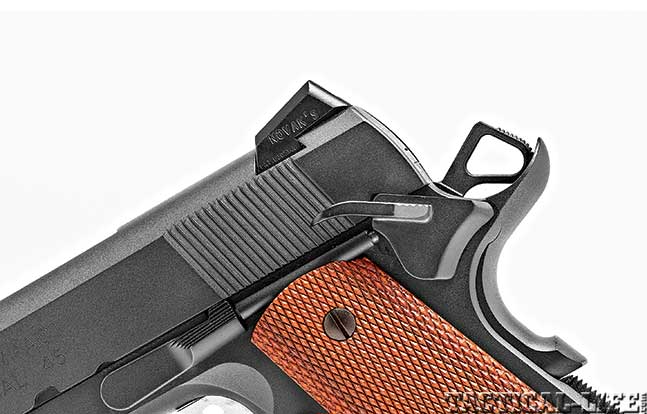 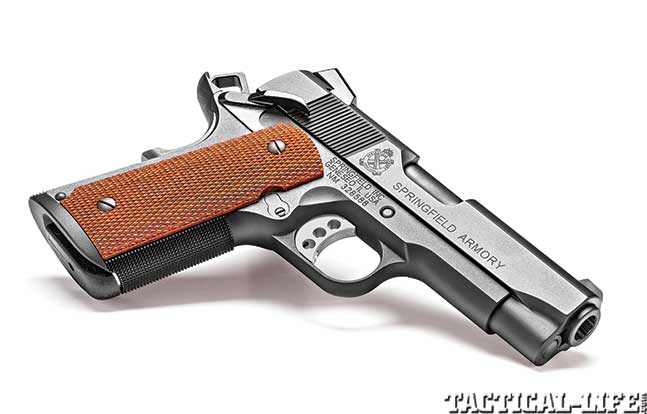 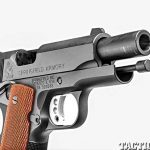 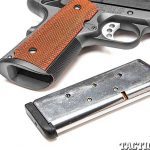 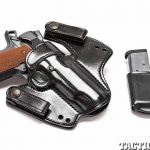 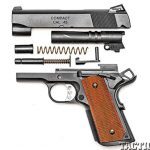 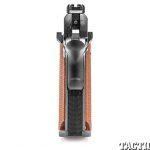 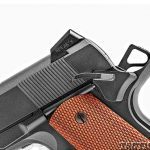 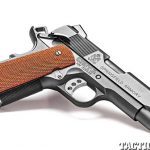 Other agencies followed the Bureau and adopted both Professional models, and around 2012, the Drug Enforcement Agency authorized the Professional for its agents under an individual purchase agreement. Surprisingly, next to the FBI, the largest user of the Professional series is the U.S. Marshals Service. The Marshals Service authorized the Professional for its Special Operations Group, or SOG. According to the Service’s website, the SOG is a “self-supporting response team capable of responding to emergencies anywhere in the United States or its territories…all SOG deputies undergo extensive, specialized training in tactics and weaponry. These deputies must meet rigorous physical and mental standards. The group’s missions include apprehending fugitives, protecting dignitaries, providing court security, transporting high-profile and dangerous prisoners, providing witness security and seizing assets.”

Those who have worked with a 5-inch-barreled 1911 understand that, while it is a great pistol, it is large (8.25 inches in overall length) and heavy, weighing in at 39 ounces. To carry a 1911 on a daily basis requires a solid belt and a well-designed holster. However, a good belt and holster can only do so much for concealment. This becomes even more critical for a law enforcement officer who is working in an undercover or covert capacity. After receiving a number of requests from the Bureau, the Springfield Custom Shop built a concept pistol that was coined the “Mini Pro.”

“All in all, the TRP Compact is a no-frills, all-business pistol for the serious shooter.”

Chambered in .45 ACP, the Mini Pro was built on a compact Officer’s Model-sized frame with Springfield’s Champion-length slide. Like the Pro, the Mini Pro was a full Custom Shop build that was ideal for plainclothes or off-duty carry. I had the opportunity to review the Mini Pro for the February 1998 issue of Guns & Weapons for Law Enforcement. My test pistol exceeded my expectations, and I hated to return it to Springfield afterward.

While the Bureau never adopted the Mini Pro, the concept of a compact pistol to augment the Professional did not die. While the Mini Pro was a great little pistol, it was both expensive and time consuming to produce. Since individual agents would purchase many of these pistols, Williams and his crew went back to the drawing board. The solution was to build a TRP Compact. The TRP is probably the best value of any 1911 on the market today. Every TRP I’ve ever shot has been 100 percent reliable and exhibited a fit and finish that mirrored much more expensive pistols.

The U.S. Marshals Service was the first agency to approve the TRP Compact for personal purchase/official use. Since that approval, the Springfield Custom Shop has been working to fill a number of orders for individual marshals and other law enforcement agents. In doing so, the little gun has taken on a life of its own. I was fortunate to obtain a sample pistol that was completed but had not been delivered to the owner. As such, I was extremely careful during the testing and evaluation.

In a conversation with Williams, I asked him what the difference, other than size, was between the TRP Compact and the standard TRP. The TPR pistol is produced on the standard production line at Springfield Armory’s plant in Geneseo, Illinois. The TRP Compact is completely assembled in the Custom Shop, where it receives a lot more “TLC” than the production-line guns. The first place this care is found is in the pairing of an alloy, National Match frame and the Champion-length steel slide. The gunsmiths may go through several pairings to get an improved slide-to-frame fit. Other areas of care include the fitting, blending and checkering of the special Smith & Alexander magazine well/mainspring housing. The Custom Shop uses a one-piece Smith & Alexander mag well that is checkered and drilled for the retaining pin during assembly. The gunsmiths also perfectly blend the rear of the extractor and the rear edges of the slide to the frame. The frontstrap and mainspring housing are cleanly checkered at 20 lines per inch (lpi).

“Springfield has announced that a production version of the TRP Compact will be introduced in the near future.”

The TRP Compact uses all of the internal parts of its TRP big brother and features Springfield’s ambidextrous safety and extended beavertail grip safety. The lightweight, three-hole trigger has an adjustable overtravel stop and breaks cleanly at 4 pounds. The rear sight is a Springfield/Novak model that is equipped with tritium inserts from Trijicon.

Since this is a Custom Shop build, each pistol can be built to the customer’s specifications. My pistol was finished in flat black Armory Kote, but other finishes are available. The finished 1911 pistol has a 4-inch barrel, an overall length of 7.5 inches, a height of 5 inches and an unloaded weight of 27.5 ounces. Two 6-round, stainless steel magazines are included with the package. All in all, the TRP Compact is a no-frills, all-business pistol for the serious shooter.

On the range, the TRP Compact digested a variety of loads without any hiccups. Since it’s a lightweight pistol, a more aggressive stance and grip were required to control the recoil. Given the short 4-inch barrel, I first selected two 185-grain loads. ASYM Precision’s 185-grain Barnes TSX load averaged 983 fps, while the Hornady 185-grain FTX Critical Defense load averaged 1,005 fps. While a little hot for a compact pistol, I also tested Hornady’s 220-grain +P Critical Duty ammo, which averaged 972 fps. To measure the pistol’s accuracy, I fired it off-hand from 15 yards. On average, it produced five-shot groups between 1.25 and 2.25 inches. The ASYM load produced a best five-shot group that measured 1.56 inches, while the hot Hornady Critical Duty load opened up to 2.2 inches. The best group, measuring 1.2 inches, came with the soft-shooting Hornady Critical Defense ammo. This is probably the round I would choose to carry in the TRP Compact on a daily basis.

Compact 1911 pistols, especially in .45 ACP, require the proper pairing of parts to ensure reliability. As the gun is reduced in size, a lot of the internal geometry changes. The space needed for the slide travel and barrel drop decreases. The smaller and lighter slide runs at a higher velocity than a full 5-inch-barreled gun and requires a different recoil spring setup. The faster slide requires a stronger magazine spring to feed the rounds quicker. There is a reason that many 1911 manufacturers steer clear of compact and subcompact models: They are hard to make. Fortunately, Springfield understands these dynamics and has made a pistol that is accurate, reliable and easy to carry.

For deep cover, the TRP Compact is an ideal candidate for Galco’s V-Hawk IWB holster. The V-Hawk is constructed from premium steerhide, making it virtually indestructible. It can be worn using the standard 1.5-inch belt loops or with the optional tuckable, injection-molded C-hooks. The wide spacing of the belt loops prevents shifting and tucks the butt of the pistol close to the body. The reinforced mouth allows for one-hand reholstering.

In an age of high-capacity, polymer-frame service pistols, I find it noteworthy that one of our nation’s oldest law enforcement agencies is carrying and has authorized a 1911. The Springfield Armory Custom Shop’s TRP Compact is the ideal backup to the full-sized guns and, as an off-duty pistol, matches all the same operating controls as the full-sized Professional. While the project has been ongoing for over a year, Williams emphasized that this is a special run that is only available to “authorized agencies.” The TRP Compact, as evaluated, will not be offered to the general public. However, the next time you see a deputy U.S. marshal, there is a good chance that he may be carrying one of Williams’ latest creations.

As this goes to press, Springfield has announced that a production version of the TRP Compact will be introduced in the near future. 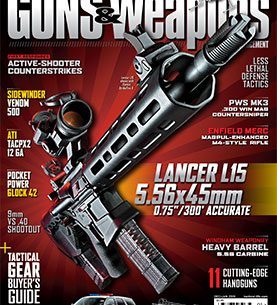 “The gift that keeps on giving!” That is the way Dave Williams describes the…