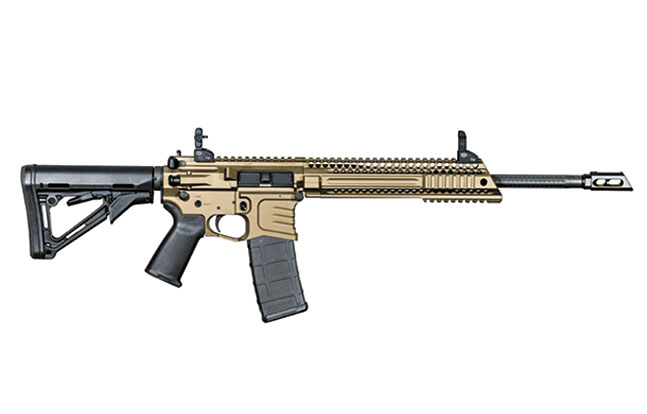 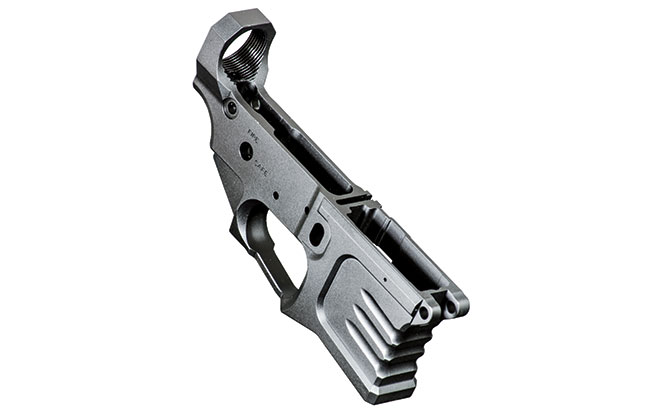 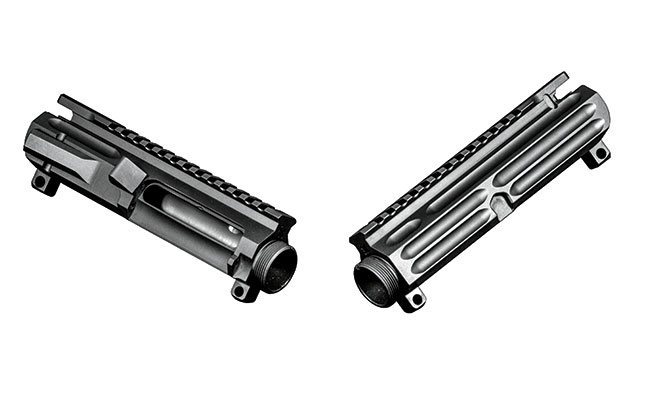 3 of 5
Gun Review: Yankee Hill Machine Model 57
The billet upper is machined from 7075-T6 aluminum. Note the heavy-duty shell deflector and forward assist housing (left) and the fluting (right) along the exterior. 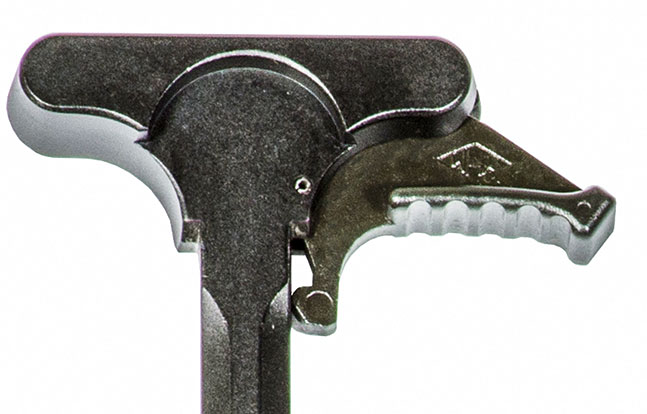 4 of 5
Gun Review: Yankee Hill Machine Model 57
Another enhancement included with the Model 57 is YHM’s Tactical Charging Handle, which has an extended latch that is easier to manipulate while wearing gloves. 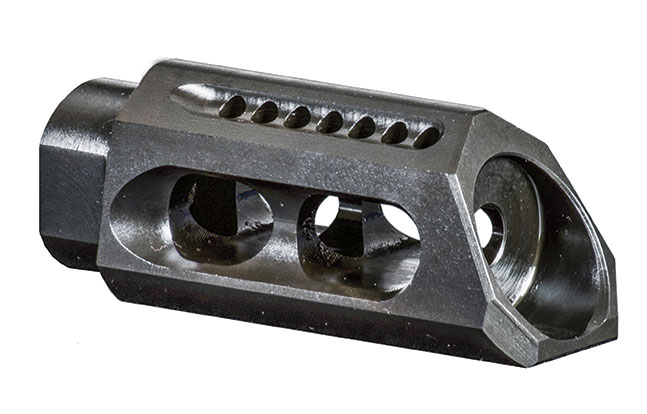 5 of 5
Gun Review: Yankee Hill Machine Model 57
YHM caps the Model 57’s barrel with its new Slant muzzle brake/compensator, which is made from heat-treated steel and is plated with a matte black Melonite QPQ finish. 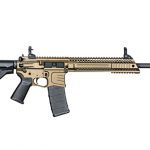 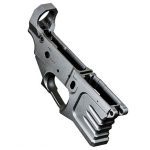 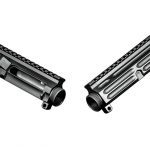 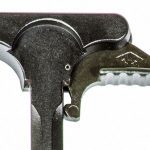 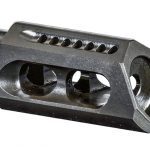 Any informed fan of the modern AR rifle is undoubtedly well acquainted with the name Yankee Hill Machine (YHM). Having earned a reputation for building rock-solid AR parts and accessories, the company’s history stretches back to the 1960s, when it first produced cleaning rods for M16 cleaning kits under a U.S. military contract. As the years passed, the company developed a reputation for quality and began producing parts for firearms manufacturers under OEM contracts. YHM soon found itself producing parts featured on rifles from some of the biggest manufacturers in the industry.

However, the company determined that it could produce its own designs better and cheaper and set about developing its own distinctive product line. One of the earliest examples of this was the Phantom 5C2 flash suppressor, which helped establish YHM as a brand within the industry. In the mid-1990s, YHM took the next logical step and began producing complete AR-platform rifles (as well as a suppressor line), further building its brand. At the same time, the company continued to produce its respected line of parts and accessories, with many of them still showing up on competitors’ products through to this day.

Not wanting to rest on its laurels, YHM has recently expanded its line of complete AR rifles to include the Model 57 billet carbine. As you likely surmised from its moniker, the heart of the rifle is its billet-machined upper and lower receivers. The Model 57 is available in chamberings ranging from 5.56mm NATO to 6.8 SPC to 300 Blackout, and is offered in a traditional matte-black finish or as an even more distinctive limited run of Burnt Bronze
Cerakoted carbines.

The billet upper and lower receivers are the heart of the Model 57 carbine, and they feature very unique styling. Machining the receivers from 7075-T6 aluminum billet (which is done in-house by YHM) allows the company to develop custom-style anodized receivers that can still accept most mil-spec-configured parts.

“If you take this carbine out of the case at the range, you are going to attract attention.”

The lower receiver features numerous upgrades and enhancements over standard forged receivers. The magazine well features an oversized chamfer for faster reloading and an integrally machined triggerguard that enhances both the handling characteristics of the carbine as well as its strength. From a visual standpoint, one of the most distinctive elements of the lower is the exterior of the magazine well. The forward face features machined-in grasping grooves, and the forward two-thirds of its lower face sports a downward rake. The rear of the magazine well area blends into a generously sized “gate” portion around the magazine release button. Internally, the carbine features a two-stage, 5-pound trigger. While the safety is non-ambidextrous, the lower features selector markings on both sides that correspond with the selector switch’s lever on the left side and a raised tab on the right.

The Model 57’s billet upper receiver matches the styling of the machined lower, taking advantage of the machining process to really enhance the styling of the part over a traditional forged upper receiver. Internally, the anodized flattop receiver sports M4-style feed ramps and a dry lube coating, while externally it features a heavy-duty forward assist housing and shell deflector, as well as attractive lightening cuts/grooves above the forward assist and along the left side of the upper.

As with the lower, the upper can accept standard mil-spec-configured parts and accessories. The dust cover included with the rifle is adorned with the chambering of the firearm. This semi-automatic rifle also features YHM’s EZ Pull takedown pins, which feature extended and enlarged heads for simplified disassembly. Another enhancement is the inclusion of YHM’s Tactical Charging Handle that features an extended latch.

Forward of the receiver section is a mid-length Specter SLR-Slant free-floated forend. The handguard features a full-length top strip of rail along with 4-inch rail sections at the 3 and 9 o’clock positions and a 4.5-inch strip of rail at the 6 o’clock position at the front of the forend. The bottom of the rail is drilled and tapped to accept additional sections of rail if so desired.

The handguard covers a carbine-length, direct-impingement gas system with a low-profile gas block attached to the short 16-inch barrel. The barrel is made from 4140 steel that is heat treated to 25-32 Rockwell, and it features extensive ball-cut fluting that is as visually notable as the cuts to the billet receivers. The finish is on the barrel is a Melonite QPQ coating. Topping off the 1/2×36-tpi-threaded muzzle of the barrel is YHM’s Slant muzzle brake, which is machined from steel and plated with a matte black Melonite QPQ finish.

Obviously, no YHM rifle would be complete without some trademark YHM accessories. To that end, the Model 57 is topped off with a set of the company’s Quick Deploy Sights (QDS) that flip up with the push of a spring-loaded button. The sights, manufactured from aluminum and anodized black, lock solidly into both open and closed positions. When folded flat, they add only 0.44 inches to the top rail. The rear sight is a dual-aperture peep that is windage adjustable, while the front sight is an elevation-adjustable post with heavy-duty protective wings.

To round out the package, the Model 57 sports a Magpul MOE+ pistol grip that has a reinforced polymer body covered with a comfortable rubber over-molding for enhanced handling. It has a storage trapdoor at its base and is compatible with Magpul’s storage cores. The collapsible buttstock on the commercial-spec receiver extension tube is a Magpul CTR unit. It features a low-profile, A-frame shape for minimized snagging on gear that protects the release latch. For added stability, the stock also features a friction lock that minimizes stock movement once engaged. The buttpad of the Magpul CTR stock is an extended 0.55-inch unit. Finally, the Model 57 comes with a standard carbine H1 white-tip buffer.

YHM ships its Model 57 rifles in hard plastic cases, and they each come with two magazines. In the case of rifles chambered in 5.56mm NATO or 300 AAC Blackout, the package includes two 30-round Magpul Gen 2 PMAGs. The 6.8 SPC version comes with two 25-round ASC metal magazines designed specifically for feeding that cartridge.

YHM recently sent me a Burnt Bronze Model 57 in 6.8 SPC for testing and review. As is likely clear from my earlier description of the design and features of the Model 57, YHM went to great lengths to create a carbine that is visually distinctive and eye catching. I can attest, from the moment I opened the plastic case, that I believe the company has soundly achieved its goal.

The rifle is remarkable looking, from the Burnt Bronze Cerakote finish on the upper and lower receivers and the forend to the intricate fluting and lightening cuts on the receiver sections and the barrel to the muzzle device at the threaded tip of the barrel. If you take this carbine out of the case at the range, you are going to attract some attention.

The Model 57 came with all the aforementioned parts and accessories, and Yankee Hill Machine was kind enough to also include an additional 4-inch rail for the forend. I took the Model 57 out and closely inspected it. Beyond the flashy appearance, the carbine proved to have everything expected of a contemporary, well-made AR carbine. After a light lubing and reassembly, I took the Model 57 carbine to the range with a Leupold 6.5-20x50mm Mark 4 LR/T M1 scope and a selection of Federal, Hornady and Remington ammunition.

My first impression of the Model 57 upon firing was quite good. Although 6.8 SPC rifles can be a bit whippy in recoil compared to 5.56mm models, the carbine’s recoil was very tame. This was no doubt due to the well-designed brake as well as the carbine’s 7.43-pound weight. The rifle was also extremely accurate, turning in sub-MOA best five-shot groups with all three loads tested, showing a slight preference for the Federal load. This is one accurate carbine. While the accuracy is no doubt attributable to precision manufacturing and fitting, the trigger pull did not hurt either, breaking very cleanly at 6 pounds. While this was a tad above the advertised weight of the trigger, I was happy with the smooth pull and clean break it offered.

Once done with the accuracy testing on the bench, I moved on to running the gun through some shooting drills. I swapped out the Leupold scope for a Vortex StrikeFire II reflex sight paired with a VMX-3T magnifier unit on a flip-to-side mount and began shooting at targets ranging from 25 to 50 yards. I was able to hit them quickly and accurately, and the carbine ran through a few hundred rounds without a hiccup.

It looks as though Yankee Hill Machine has accomplished its mission with the new Model 57. With its distinctive styling, top-notch features and impressive performance, the carbine is well worth the asking price for the consumer who wants something a little different. And, the limited-run Burnt Bronze finish adds even more appeal for the AR enthusiast who is looking for an eye-catching new addition to his or her collection. 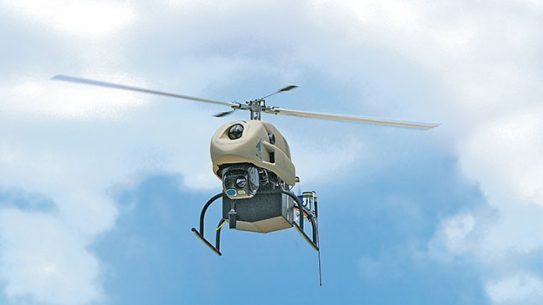 Eye in the Sky: Modern UAVs For Reconnaissance