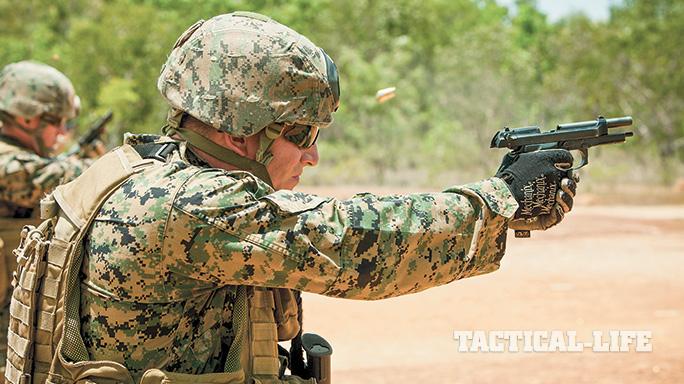 1 of 7
Gun Test: Beretta’s Combat-Ready M9A3 Pistol
The battle-tested M9 has proven its worth in combat ever since it was first fielded by the U.S. Army in the 1980s. 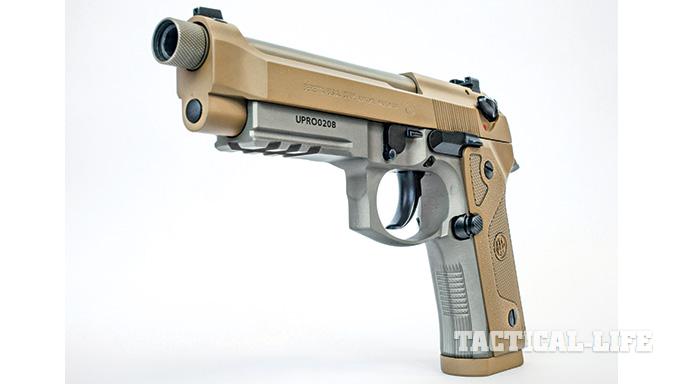 2 of 7
Gun Test: Beretta’s Combat-Ready M9A3 Pistol
The M9A3 is an enhanced version of the U.S. Army’s M9, with an ultra-durable Cerakote finish, replaceable sights, a new frame and many more upgrades. 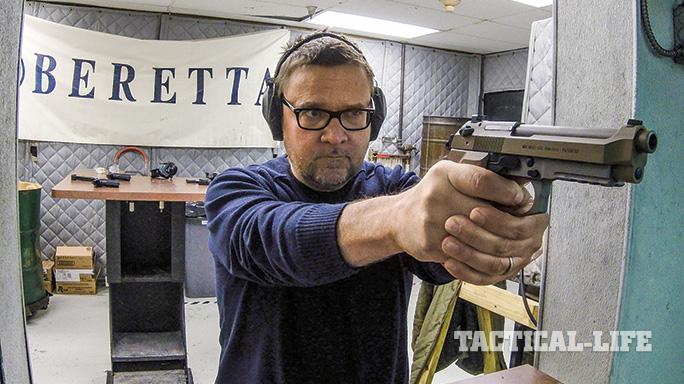 3 of 7
Gun Test: Beretta’s Combat-Ready M9A3 Pistol
During testing, the M9A3 ran flawlessly with and without a suppressor installed, and the author enjoyed its enhanced ergonomics. 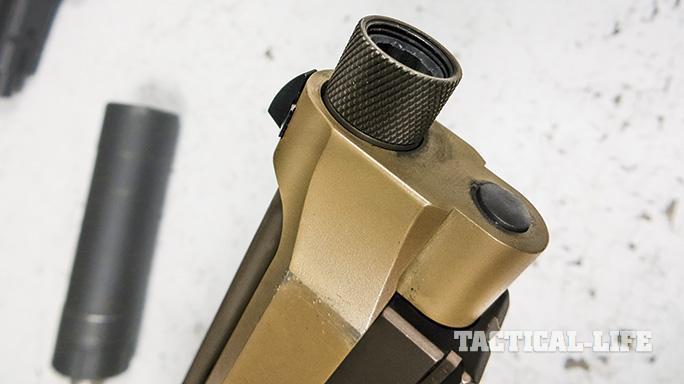 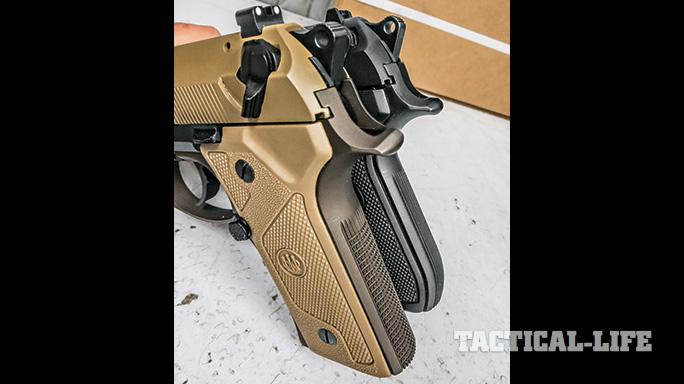 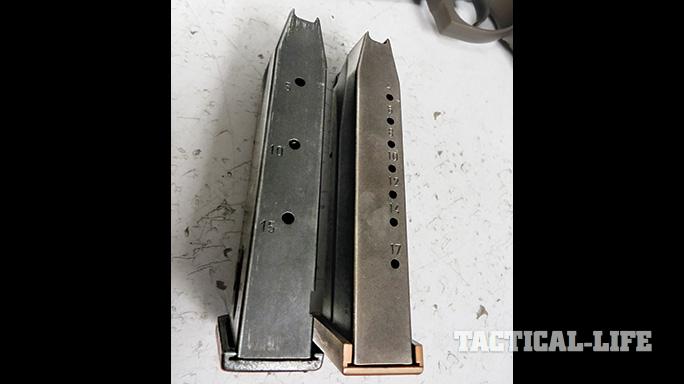 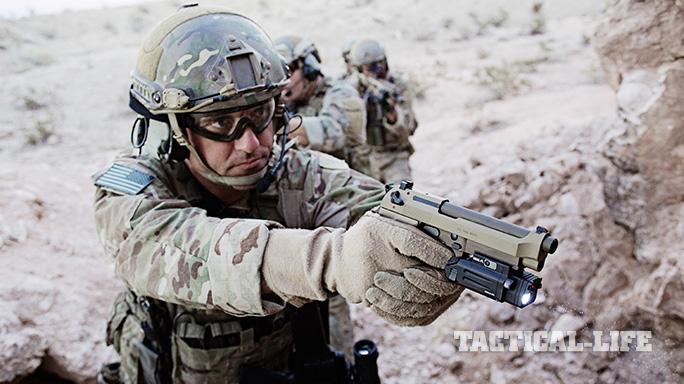 7 of 7
Gun Test: Beretta’s Combat-Ready M9A3 Pistol
The M9A3 is designed for the modern warrior who requires a handgun that can be adapted for different missions and harsh environments. 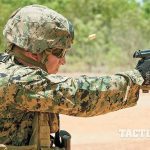 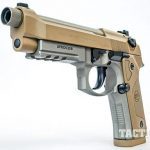 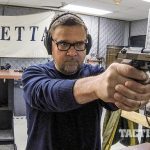 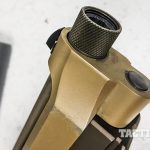 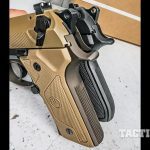 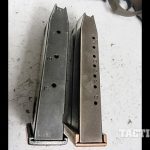 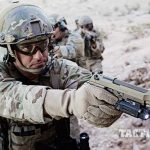 Better ergonomics, better performance, a better Beretta. The new Beretta M9A3 is everything an operator would expect in a Beretta M9 series pistol—and much more. After 30 years of U.S. military use, starting in conflicts like the invasion of Panama to the recent war in Afghanistan, the M9 has proven its worth as well as shown its age. It is, after all, a 30-year-old design. The new M9A3 is the next generation of M9 fighting pistol proposed by Beretta Defense Technologies (BDT) to the U.S. Army to equip America’s warriors well into the 21st century.

“BDT is a strategic alliance of companies consisting of four brands owned by Beretta Holding: Beretta, Bennelli, Sako and Steiner,” explained Gabriele De Plano, the vice president of BDT USA’s marketing and operations. “All of these companies have a rich military heritage and, when combined, offer small arms systems for military customers.”

I recently had the opportunity to shoot the M9A3 and hear the story of the M9’s evolution firsthand from de Plano on a cold February day in Accokeek, Maryland, at Beretta USA’s headquarters.

When I speak to veterans about the M9, I can hear it in their stories, see it in their eyes. The M9 is more than a piece of equipment. In some cases, the Beretta saved their lives. That bond was not always there. The change did not come easily; the M9 earned it one round at a time.

“In all, the M9A3 performed flawlessly, and it improves upon the ergonomics of the M9 …”

The transition from the venerable M1911A1 to the M9 was wrenching for some in the U.S. military, but by 1979 the situation could not be ignored any longer. The M1911A1s in service were worn out. The Joint Service Small Arms Program began searching for a replacement pistol to use the 9mm round that was chosen to comply with the NATO Standardization Agreement (STANAG). The .45 ACP was out. The 9mm was in. That switch was difficult enough for some in the U.S. military to accept, making it easy to see why any pistol chosen—American or foreign made—was going to be controversial. The new chambering and Beretta pistol were not without their critics. At the time, the M1911A1 had nearly 75 years of service under its belt. The Beretta pistol had to prove its worth for some even before it was accepted by the military. And it did.

“Beretta won two consecutive pistol trials before winning the M9 contract,” explained de Plano, offering insight into the M9’s history. Prior to the M9 contract, Beretta won the JSSAP competition by the Air Force. The test results were contested, and the Beretta was retested in the XM9 trials. Beretta won again, and yet again the results were controversial, so the Beretta was submitted to the XM10 trials. The Beretta excelled in all the trials the military could throw at it while competing against other well-known pistol designs from other established companies. After the dust settled, mostly silencing critics, the M9 began delivery. “About 600,000 pistols have been delivered to the Department of Defense [DoD],” said de Plano. “We estimate that about 425,000 went to the Army and the rest to other services and foreign military sales.” The DoD either gives or sells M9s to other countries. Many foreign military sales have gone to Iraq and Afghanistan.

The first few years of the contract allowed Beretta to supply the U.S. government with pistols made in Italy. “Since 1987, all pistols have been made in Accokeek, Maryland,” de Plano added. Beretta USA may have an Italian heritage, but the M9 design is owned by the U.S. military and is built by an American workforce. A fact that Beretta takes pride in.

Since the U.S. government owns the M9 design, the DoD is free to make design changes and purchase spare parts from other vendors. Some decisions by the DoD have inadvertently given Beretta grief. For example, the DoD purchased magazines with a phosphate finish from an outside vendor that performed poorly in sandy environments. Beretta got a black eye for it, even though the magazines were not Beretta-made nor Beretta’s design. Beretta magazines, on the other hand, offer a grit-resistant finish in a design that allows grit and sand to flow through the magazine and not clump up and impede cartridge feeding.

“In September 2012,” de Plano explained, “the Army awarded Beretta USA a five-year indefinite delivery/indefinite quantity [ID/IQ] contract for up to 100,000 pistols.” The Army can order as few or as many as it needs, up to 100,000. Of the 100,000, de Plano says, the Army has ordered 20,000 pistols, which means 80,000 pistols can still be delivered. “Of the remaining orders,” reasons de Plano and Beretta, “why not improve on the existing design and deliver the M9A3?” Also around this same time, the Army announced the Modular Handgun System (MHS) program to potentially replace the M9 and the compact M11 pistol. New programs implemented by the Army and other branches of the service are a relatively common occurrence; some lead to change while others fizzle out due to lack of funding. “Because the MHS is also an open-caliber solicitation,” de Plano explained, “the 9mm chambering may also be replaced.”

The M9A3 is not an entry for the Army’s MHS solicitation; it would only meet about 84 percent of the draft RFP’s requirements. Beretta plans to enter its new striker-fired APX into the MHS solicitation (see the sidebar on page 24 to find out more). In the meantime, the Army could be taking a dual-prong strategy: improving the M9 while finding a new pistol. In reality, a new pistol replacement would take years to implement with design, manufacturing, logistics support, training, ammo procurement and more, slowing the process.

BDT submitted the M9A3 to the Army as an Engineering Change Proposal (ECP) to the M9. All DoD contractors are encouraged to submit engineering proposals. The DoD also solicits input from the industry on improvements. For instance, the Army recently requested improvements and/or replacement ideas from the industry for its SASS semi-automatic sniper rifle system. The ECP process is part of the Army’s tradition of incremental small arms development.

BDT took the initiative and looked at what could be done to make the M9 better. “We began collecting data from a variety of sources,” said de Plano. A wish list of sorts was compiled that addressed issues ranging from the M9’s modularity and durability to its grip size and ergonomics. The new Beretta M9A3 addresses nearly all of the concerns, and the ECP was presented to the U.S. Army Contracting Command on Dec. 10, 2014.

“The new M9A3 is the next generation of M9 fighting pistol … to equip America’s warriors well into the 21st century.”

The M9A3 pistol had a familiar feel yet fit my average-sized hands better due to its Vertec frame, with a straight backstrap and thin grip panels. The Vertec model was offered commercially from 2002 to 2005. The girth of the M9 grip is a concern for some operators, as it is with many double-stack 9mm pistols. The Vertec frame addresses the girth issue, making the pistol feel thinner. For those with larger hands, the M9A3 will come with a wraparound grip backstrap that makes its grip size similar to the M9’s.

Another “complaint” about the M9 was its magazine capacity. The M9A3 increased the capacity from 15+1 to 17+1. The barrel is also threaded for use with a suppressor, and Beretta ships the gun with a thread protector. The front sight is now removable, so a higher front sight can be installed when the M9A3 is used with a suppressor, or if the user wants to install night sights, for example. An accessory rail was added, similar to the USMC’s M9A1 variant, so that the M9A3 can be outfitted with a laser or light. The magazine release button has been enlarged and the magazine well has been beveled, making it easier for an operator with small hands to dump a magazine and reload quickly.

The safety lever of the M9A3 can be swapped with a decocker at the armorer level. The internal components have also been updated. Beretta has made 30 years’ worth of improvements in its 92FS model, and those improvements are reflected in the M9A3, like its third-generation tilting locking block.

To reacquaint myself with the M9 platform and create a benchmark, I first fired the M9. The familiarity came back to me: the DA/SA trigger, the safety lever, the girth of the grip. For testing the M9A3 we used Hornady’s 135-grain Critical Duty ammo, which has a factory-specified velocity of 1,010 fps. With this commercial ammo, I had no issue shooting the black out of the target at 7 yards. The 4-inch bullseye was gone after about 100 rounds, aside from a few errant shots in DA mode. To test the pistol’s balance and performance, I installed an AAC Ti-RANT 9mm suppressor, and it ran exceptionally well.

In all, the M9A3 performed flawlessly, and it improves upon the ergonomics of the M9 while saving money for the DoD—no new training, complete compatibility with existing equipment systems like holsters and magazine pouches, and potentially at a cost less than the current M9. “Major components from the M9A3 are 100-percent compatible with the M9; 76 percent of the M9A3’s individual parts are interchangeable with the M9,” de Plano said.

The M9A3 has several performance enhancements that’ll benefit the end-user—our warriors—and is potentially a better value for the DoD and us taxpayers if adopted. A commercial version of the M9A3 will be available later in 2015. As much as Beretta is associated with pistols for tactical, personal defense and competition uses, the firearm manufacturer also offers tools and parts specific to the 92FS/M9 series of pistols like skeletonized hammers, oversized magazine release buttons, .22 LR conversion kits, magazines and Novak rear sights, to name just a few. Clothing and cases designed for concealed carry as well as tactical knives and lights are also part of what Beretta offers commercial and military markets.