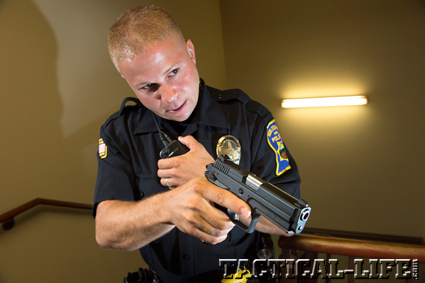 1 of 6
Chiappa-5
For the cop selecting his own duty gun, choosing the right pistol takes careful consideration. 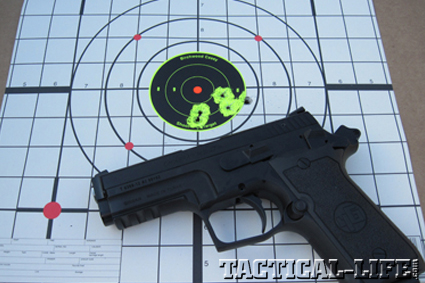 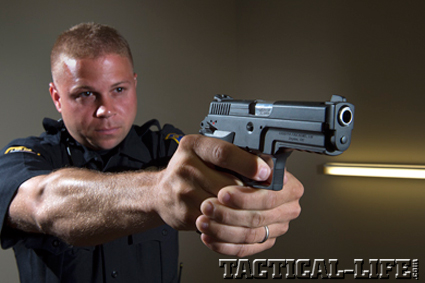 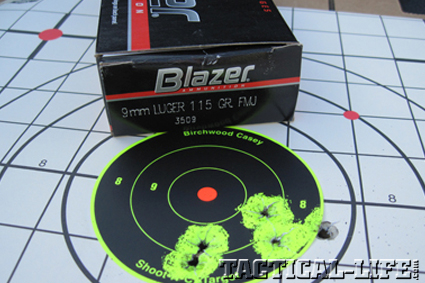 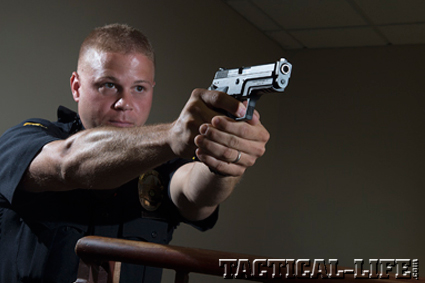 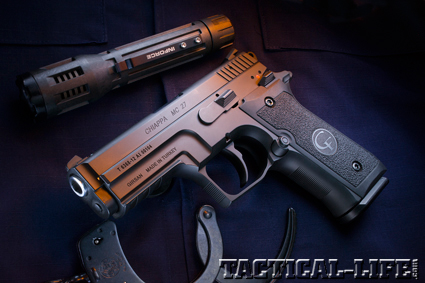 6 of 6
Chiappa-8
Chiappa’s new double-stack, DA/SA semi-auto, the MC27, has the ergonomics, reliability and 15+1 capacity to truly give LEOs the edge. 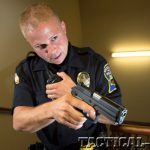 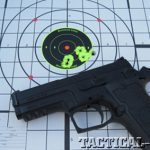 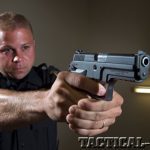 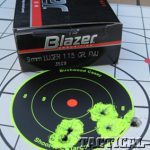 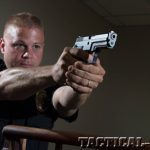 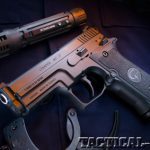 For the cop selecting his own duty gun, choosing the right pistol takes careful consideration. It’s more than buying what is popular or what the gun store clerk recommends. It’s about fit, function and reliability. I agree with Colonel Jeff Cooper’s three required features for a combat pistol—a smooth trigger, high-visibility sights and complete reliability—though I would also add fit to the mix, as a gun that is too big for the shooter will never be used as productively as it could be. Trigger control isn’t simply a matter of depressing the trigger in a straight motion—it’s also about being able to properly reach the trigger and not just “smashing” it to the rear. Considering that 0.06 inches of muzzle movement translates to 4.5 inches at 20 feet, smashing the trigger will likely result in a miss on target at any distance beyond arm’s length.

That said, not everyone can make use of a short-action trigger. Many law enforcement agencies require a long, double-action (DA) trigger on at least the first shot as an added “safety” measure (safety is a function of the brain and not a mechanical device, but that is for another time) to ensure that the gun is not fired inadvertently under stress. Others prefer a single-action (SA) trigger with a manual safety lever for fast follow-up shots. Neither is more “right” than the other, as we each face unique circumstances and challenges

requiring application-specific tools. A major factor in choosing a firearm for combative applications is the real-world situation in which we must operate.
Chiappa Firearms, based in Italy, is making some big inroads into the American firearms market. The company’s Rhino revolver, especially in its snubby version, is the first truly unique revolver in quite a while, and its short DA-only trigger action makes it one of the fastest-shooting factory revolvers currently available. But revolvers are not at the top of the heap when it comes to selecting a duty handgun, thus Chiappa’s introduction of a new double-stack semi-auto, the Chiappa MC27, should not come as a surprise.

Just because something is old does not mean it’s obsolete. “New” often means unproven, while older designs have usually been proven to work well. Think about how many new guns have been introduced only to get recalled when some aspect of the “new” design fails. Chiappa’s MC27 is a DA/SA pistol with a thumb safety that acts as a hammer-locking device instead of a hammer drop. For those that like “cocked and locked” carry, this is welcome news. For those who like to decock their pistol via a spring-loaded lever, the news is different, as the hammer must be manually lowered with the thumb. The MC27 is manufactured in Turkey by Girsan and imported into the U.S. by Chiappa, and as their collaboration advances, changes will be made—one of them being the introduction of a manual, Sig Sauer-like decocking lever.
Speaking of Sig Sauer, the MC27 is reminiscent of a Sig P229 in both looks and fit. The grip is very pleasing for a double-stack pistol and has an excellent grip angle. The grip panels are lightly stippled and rest in the hand quite well. The magazine well has a sharp edge around the bottom and really needs to be beveled, but this is a small problem that is easily handled. The magazines, made in Italy, are robust and hold 15 rounds of 9mm ammunition.

The DA trigger has a stout 12-pound pull, while the SA trigger pull proved to be a pleasing 4.5 pounds with a reasonable 0.25-inch reset. For those who like the feature, the MC27 has a second-strike capability, but I must admit that I come down on the side of the “tap-rack” when any pistol misfires. Slack on the DA trigger was minimal, and the gun shot quite well after a few hundred practice rounds.

The white three-dot sights on top of the slide are large and easy to see, with the rear having a Novak-style ramped back. The slide lock/release lever is large and easy to manipulate and also acts as the takedown lever for field-stripping. It should be noted that the MC27 also comes in a DAO version, with the primary differences being the lack of the hammer spur and safety lever.

The frame encompasses the slide like a CZ pistol, making the frame “tall” on each side. I like this feature, as it allows me to get a solid, thumb-forward grip without interfering with any of the pistol’s operational levers or controls. Like most modern pistols, the MC27 has a Picatinny rail cut into the dust cover of the aluminum frame for easily mounting lights, lasers or combination units.

The MC27’s cold-hammer-forged, polygonal-rifled barrel is 3.9 inches long and has a nice feed ramp that will feed all types, styles and configurations of modern 9mm ammunition. With an overall length of 7.25 inches, a height of 5.5 inches and a width of 1.3 inches, the MC27 is a medium-sized pistol that can serve in either duty- or concealed-carry roles. It should be noted the MC27 fits nicely in many holsters made for the Sig P229.

I tested the MC27 with slow fire at 25 yards from a benchrest. I shot five 5-round groups and averaged them. I also shot five rounds across the screens of my Shooting Chrony chronograph for each load and averaged the results. Velocity is important for a combative pistol, as it affects bullet performance, especially hollow-point cartridges that rely on velocity to expand the hollow cavity of the bullet.

I admit to being surprised by the results. The most accurate load was the Speer 115-grain Blazer FMJ, long known as a good training load. Since the MC27 fits Sig P229 holsters, I finished my testing by shooting some of my favorite training drills. I started out by shooting 3-inch dots at 10, 15, 20, 25 and 30 feet and then moved on to doing Ken Hackathorn’s “Test,” which requires firing 10 rounds in 10 seconds at 10 yards on a 5.5-inch black dot. I start from a ready position, but I work until I can complete the test from the holster. This drill is a tough challenge when using an unfamiliar gun. I then moved to the El Presidente and classic Bill drills, both of which are tough when using the MC27’s long, 12-pound DA trigger. Truth be told, I ended up “cheating” and shooting the gun from its cocked-and-locked mode.

I finished my range session shooting a drill from one of my own classes called “The Rip-Off,” as it is a direct rip-off of Jeff Cooper’s El Presidente and Kyle Lamb’s El Pollo Diablo drills. You start with your back to three targets 10 yards away. The targets must be similar in size to the human chest cavity (an 8-inch circle or square, IPSC A-Zone, etc.) and not just a full-size steel silhouette. On the beep of the timer, turn, draw and fire two rounds on each target and then speed reload. Shoot one round each with only the primary hand, then transfer to the support hand and shoot one round on each target support-hand only with a par time of 11 seconds. If space is limited, use two targets with a par time of 8 seconds. Try it before you decide it sounds easy, as fast, one-handed shooting on realistic-sized targets is challenging.

In the end, the Chiappa MC27 proved to be very reliable and accurate. While shooting 400 rounds of mixed ammo, I suffered only one malfunction on the second round, when it failed to fully chamber. After that, the gun ran without interruption.

The Chiappa MC27 is a great duty pistol that fits the hand well and is capable of some fine combative shooting. The only complaint I have is with its lack of a decock feature for law enforcement applications, but this is already in the process of being addressed. If DA/SA is your choice of duty-style pistol (or cocked and locked!) the MC27 has a lot to offer. For more information, visit chiappafirearms.com. 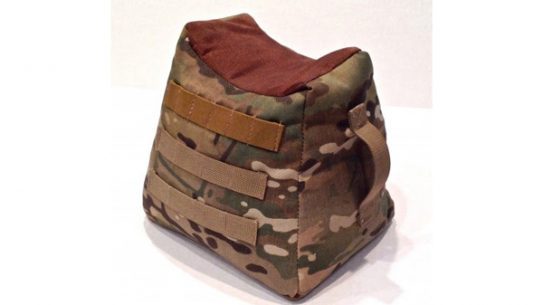