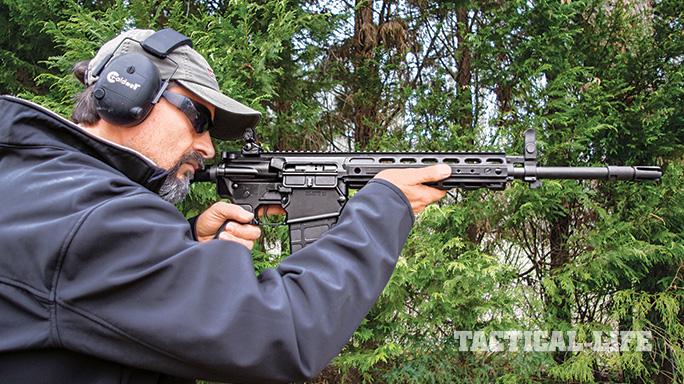 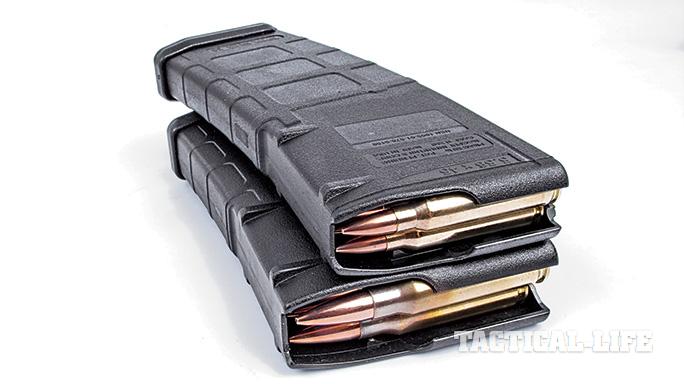 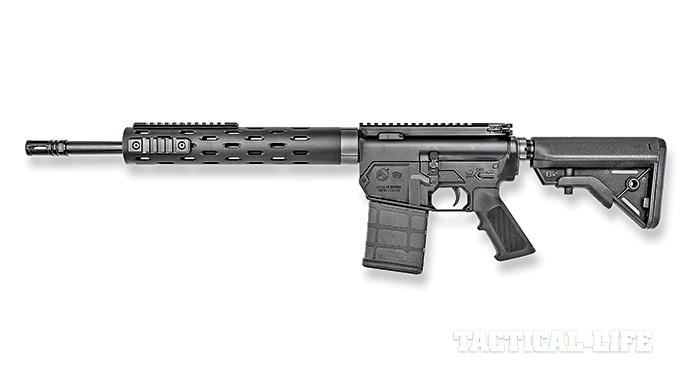 4 of 5
Gun Test: Colt’s M.A.R.C. 901 Series of AR Carbines
The AR901-16S features all the modular adaptability of its 901 brethren, all at a lower price point. It features a free-floating handguard and non-ambidextrous controls. 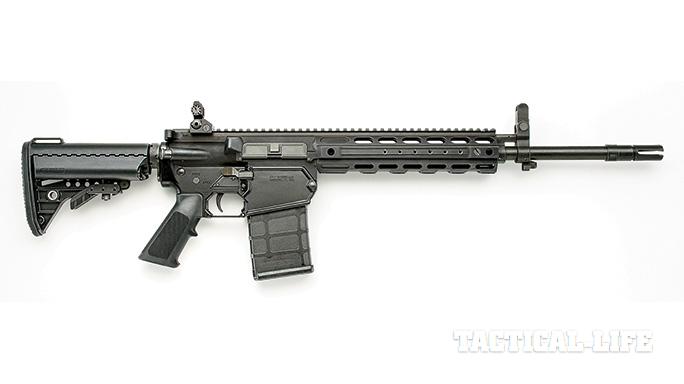 5 of 5
Gun Test: Colt’s M.A.R.C. 901 Series of AR Carbines
The LE901-16SE comes with a 16.1-inch barrel capped with a Vortex flash suppressor. Colt also ships the carbine with folding front and rear backup sights that pair well with the long Picatinny top rail, which provides plenty of space for mounting optics. 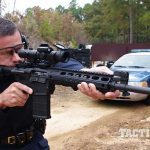 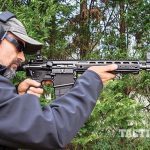 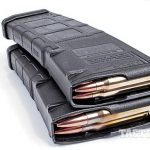 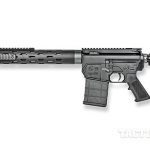 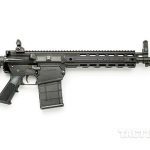 In military and tactical circles, the debate regarding the benefits of the .308 Winchester/7.62mm NATO versus the 5.56mm NATO rages on to this day. The 7.62mm round, which found its first home in the U.S. M14 rifle, delivers a large, heavy bullet with impressive long-range performance and power. The 5.56mm, made famous in the M16 family of weapons, delivers lighter recoil and increased ammunition capacity for the same weight. Each round has its proponents and detractors, with each having benefits for certain missions and situations. Wouldn’t the best solution be simply to develop one weapon platform that can fire both?

Unfortunately, this is much easier said than done. With a case length of 51 millimeters in the 7.62mm round versus the shorter 45-millimeter case length of the 5.56mm cartridge, developing a single receiver that can accept both introduces some significant engineering issues. While numerous approaches (ranging from dedicated uppers and lowers for each round to modular receivers that can be modified to each cartridge) have been attempted, none in my opinion have offered an ideal balance of simplicity and usability. That is, until the Colt 901 series.

To be frank, Colt is not the first name to pop into many shooters’ minds when the topic of innovation comes up. The company is renowned for making iconic, high-quality weapons that have proven themselves for decades—and, in some cases, more than a century—but these traditional offerings (the M1911, AR-15, Single Action Army, etc.) have given the company an air of conservatism to some. Clearly, this presumption is unfair if the 901 series is any indication of what Colt is capable of developing.

The 901 series was born from the Colt Modular Carbine program. It was developed to not only address the USSOCOM
Special Operations Forces Combat Assault Rifle (SCAR) requirements but also, according to Colt, exceed them. The SCAR solicitation called for a single serial-numbered weapon capable of multi-caliber operation. Colt’s approach to solving the complicated issue of developing one weapon capable of firing both 7.62mm and 5.56mm rounds is one of those “Why didn’t I think of that?” solutions.

“Recognizing that having access to both the 7.62mm and 5.56mm gives you greater operational flexibility, why not acquire a weapon system that can employ both?”

The heart of the 901 family is the lower receiver, which is one area that causes significant issues when attempting to combine 7.62mm and 5.56mm capabilities. The most notable visual cue to the unique nature of the 901 lower is the forward section of the magazine well. This section of the well features an angled face roughly shaped like half of a hexagon. This feature is what allows the 901 to accept both 5.56mm- and 7.62mm-length upper receivers. Simply put, the shorter top portion of the magazine well corresponds to the length of a 5.56mm upper receiver assembly, while the point that extends outward from the forward center of the magazine well roughly corresponds to the length of a 7.62mm receiver.

To install a mil-spec Colt 5.56mm AR upper assembly onto this lower, you must use a Colt “LE901-16S Conversion Kit.” The heart of this kit, which also includes a replacement 5.56mm buffer and action spring, is the Magwell Adapter Block, an ingeniously simple approach to the engineering conundrum of putting a 5.56mm into a 7.62mm lower. This aluminum adapter connects directly to your 5.56mm AR upper through an integrated pin that mates up with the upper receiver’s forward receiver pin mount.

To properly house and orient a shorter 5.56mm magazine, the adapter has a solid forward portion roughly 0.5 inches deep. An open channel on its left side allows clearance for the 901 lower’s magazine catch. To allow the 5.56mm upper to mate up with the 901 lower, the adapter also has a mid-mounted forward receiver pin interface that corresponds directly with that of the 901 lower receiver. Once you have installed the adapter block on the 5.56mm upper, swapped out the buffer and action spring in your 7.62mm lower and installed the upper, you are ready to go. This can be done in less than a minute and requires no tools.

While the founding father of the 901 family is the LE901-16S, the line has recently been expanded and adapted to include new models and options. Dubbed the M.A.R.C. 901 line (for “Modular AR Carbine”), this series includes not only the LE901-16S but also new variants such as the LE901-16SE (available in both black and Flat Dark Earth), the LE901-18SE (which sports a longer 18-inch barrel over the standard 16-inch barrel length of the other rifles) and the AR901-16S (a simplified version of the 901 series with more basic features and a lower price point).

What all versions of the design share is the multi-caliber capability of switching from their native 7.62mm chambering to 5.56mm as well as familiar AR controls and operation, simplifying training and a transition from standard 5.56mm AR carbines or rifles. All versions feature fully free-floated, chrome-lined barrels with four-groove, 1-in-12-inch-twist rifling and topped off with threaded muzzles. In addition, all feature the familiar direct-impingement system of operation shared with the original M16 rifle. Also, with the exception of the AR901-16S, the M.A.R.C. carbines feature monolithic one-piece upper assemblies. The AR901-16S features an A2-style muzzle brake, while the others sport open-tined Vortex flash suppressors.

Where the newer additions to the 901 family differ from the original LE901-16S is primarily in their features, weight and price points. Whereas the LE901-16S possesses a quad-rail forend with integrated sling swivel attachment points, the 16SE and 18SE versions feature user-configurable forends with Picatinny top rails and smooth sides and bottoms with attachment points for included rail sections. The AR901-16S comes with a tubular handguard with user-configurable rail segments. The 16SE and 18SE variants retain the integral sling swivel attachment points of the original LE901-16S. The weight of the LE901-16S is 9.4 pounds, but all of the new variants come in at roughly a pound less. Also, the prices are lower on the new variants, with the basic LE901-16SE priced at $2,181 and the AR901-16S at $1,623.

While the AR901-16S comes without standard iron sights, all other 901 variants available feature folding backup iron sights. The rear unit is a Colt-marked, windage-adjustable sight that features heavy protective wings and a dual peep aperture. The elevation-adjustable front sights are integral to the gas block (which also features a bayonet lug) and sport protective wings.

Also of note regarding the lower is the fact that it is dimensioned to accept standard AR-pattern accessories such as pistol grips and buttstocks. All 901 variants come standard with A2-style pistol grips, and all (once again, save the AR901-16S) feature Vltor IMod collapsible stocks. These feature rubber buttpads and strike plates as well as dual battery compartments that also act as enhanced cheekrests. The AR901-16S comes with a collapsible B5 Systems SOPMOD Bravo stock.

I had the opportunity to try out two of the new M.A.R.C. carbines from Colt for myself: the LE901-16SE and the AR901-16S. Both carbines came packed in Colt cardboard boxes with a sealed package of accessories, including a single Magpul 20-round magazine. Upon inspection, I determined that both carbines had good fits and finishes, and their moving parts operated smoothly.

After getting the rifles home and giving them a more thorough inspection, I equipped them with optics (a Vortex Optics StrikeFire II red dot paired with a VMX-3T magnifier unit on the AR901-16S and a Leupold 3.5-10x40mm Mark 4 LR/T scope on the LE901-16SE) and headed out to the range to put them through their paces. Early on I had a few hiccups with the LE901-16SE not fully cycling after a round was fired, but some lubrication and a little more break-in time solved the issue. I ran both the AR901-16S and the LE901-16SE for function at some close-range targets, and then settled in with them for 100-yard accuracy testing on the bench. I had picked up that both rifles were accurate from my closer-in testing, and they bore this fact out at 100 yards, too. Their overall accuracy hovered around the 1.5-inch mark, with a smallest group of 1.15 inches with the LE901-16SE and Federal Fusion ammunition.

Having tested an original LE901-16S, I must say that I like the new smooth-sided forend of the 16SE variant. It was slim and comfortable in hand, and it was nice to have the option of installing the short rail sections as desired. Both carbines were a pleasure to shoot. They handled well, and the recoil was very manageable. As a southpaw, I really appreciated the ambidextrous controls (apart from the lack of an ambidextrous safety) of the Colt LE901-16SE.

While the debate over the relative merits of the 7.62mm NATO versus the 5.56mm NATO will undoubtedly go on unabated, the

series from Colt gives enthusiasts from both schools of thought an appealing option. Recognizing that having access to both the 7.62mm and 5.56mm gives you greater operational flexibility, why not acquire a weapon system that can employ both? With the M.A.R.C. 901, I believe Colt has developed one of the best answers to the question of how you can accomplish this feat. 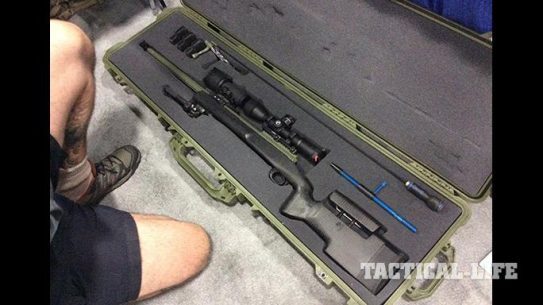