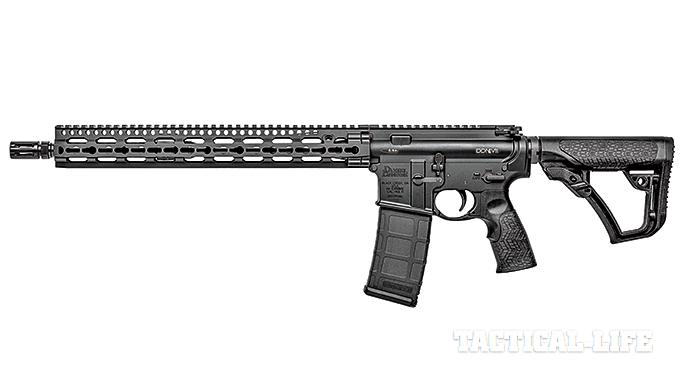 1 of 8
Gun Test: Daniel Defense DDM4V11 LW 5.56mm
Don’t be fooled—Daniel Defense may have put the 6.15-pound DDM4V11 LW in 5.56mm NATO on a diet, but it’s no lightweight when it comes to quality, reliability or combat-ready features. 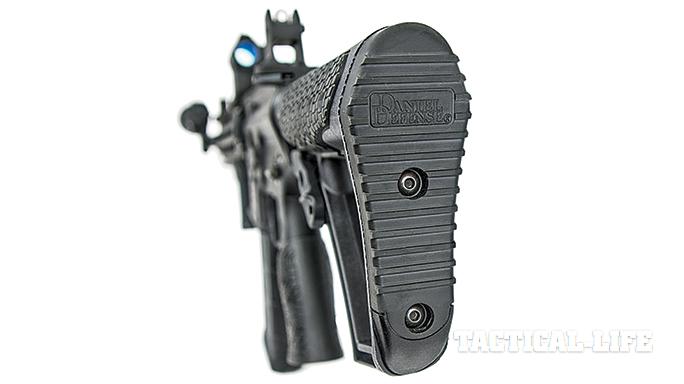 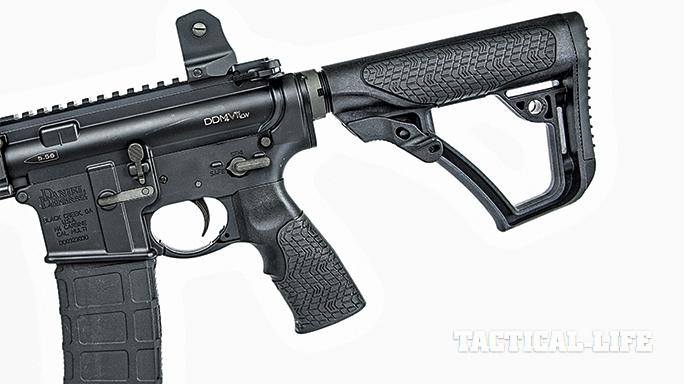 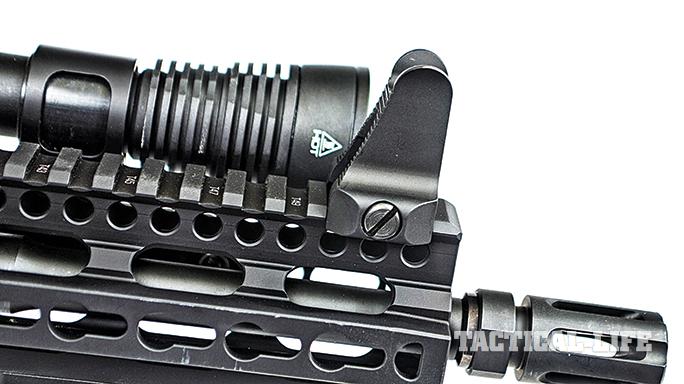 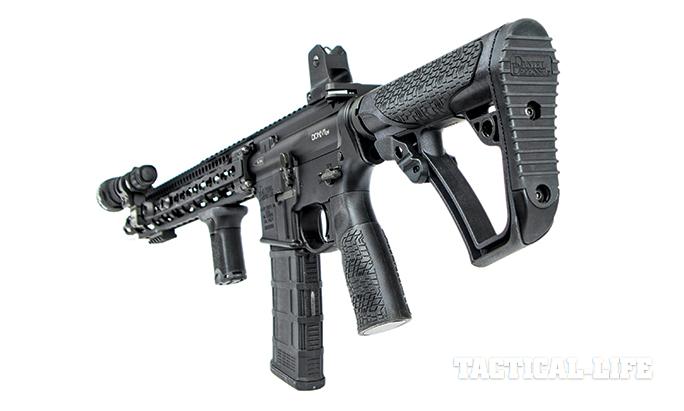 5 of 8
Gun Test: Daniel Defense DDM4V11 LW 5.56mm
Don’t be fooled—Daniel Defense may have put the 6.15-pound DDM4V11 LW in 5.56mm NATO on a diet, but it’s no lightweight when it comes to quality, reliability or combat-ready features. 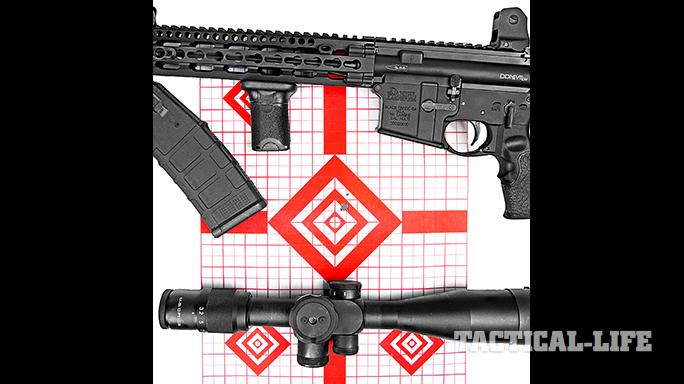 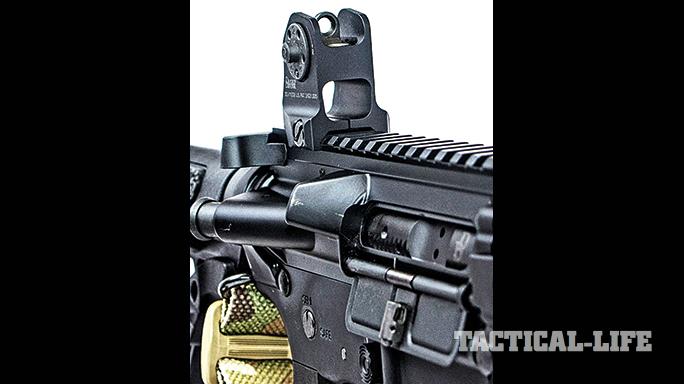 7 of 8
Gun Test: Daniel Defense DDM4V11 LW 5.56mm
The upper features a flattop rail for adding sights, such as Daniel Defense’s sturdy A1.5 fixed rear sight, as well as a standard shell deflector and forward assist. 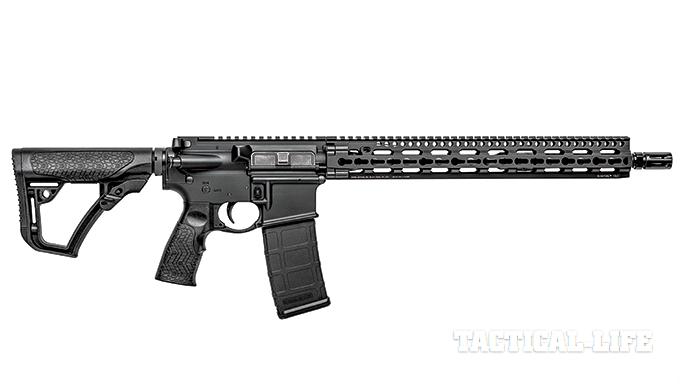 8 of 8
Gun Test: Daniel Defense DDM4V11 LW 5.56mm
Don’t be fooled—Daniel Defense may have put the 6.15-pound DDM4V11 LW in 5.56mm NATO on a diet, but it’s no lightweight when it comes to quality, reliability or combat-ready features. 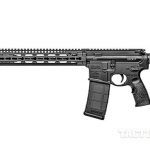 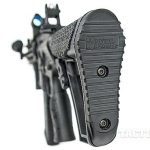 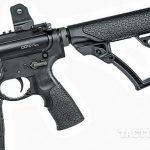 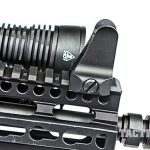 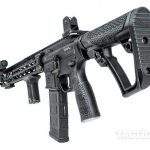 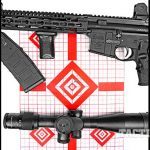 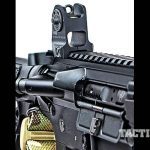 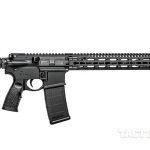 There’s no argument. The most popular rifle in the U.S. today is the AR-15. Born almost six decades ago and field-tested in the Vietnam War, the AR-15 family has been used in every subsequent military action. But generations of ex-military folks being familiar with the system did not provide the impetus for today’s AR-15 popularity. Many viewed it as a specialty firearm with little day-to-day utility.

The failure of handguns and shotguns against two armored, determined bank robbers in Los Angeles drove the AR platform into LEO patrol vehicles everywhere. It also reintroduced the AR into the mainstream gun community’s consciousness, where it remains, growing in popularity with leaps and bounds. The Global War on Terror has produced new generations of folks returning home with AR-15 familiarity. No longer is the AR a specialty firearm. LEOs and civlians demand them—and rightfully so!

Broadly speaking, there are two types of companies producing today’s ARs: smaller boutique shops and larger, more mainstream companies. One difference is the willingness of larger companies to design and build most, if not all, of their parts. At one point over a decade ago, Daniel Defense was definitely in the “smaller” category—so small that it offered no completed carbines! Daniel Defense was designing, creating and selling sling loops and rails in small batches.

My, how times have changed. Today, Daniel Defense offers parts, complete firearms and most things in between, with virtually everything built in-house. In fact, Daniel Defense has the capacity to make more than 8,000 cold-hammer-forged barrels a month in multiple calibers and configurations. In only a few years, Daniel Defense has garnered an excellent reputation.

Part of the company’s popularity stems from its attention to detail and not taking shortcuts. All Daniel Defense bolts are made of desirable Carpenter 158 steel, and they’re shot peened, high-pressure (HP) tested and magnetic-particle (MP) inspected. These are not inexpensive tests to perform, demonstrating Daniel Defense’s commitment to producing the best. Every Daniel Defense carbine comes with M4 feed ramps, and the barrels have chrome plating or are salt bath nitrided for corrosion resistance.

“The DDM4V11 LW snapped quickly from target to target during CQB drills out to 50 yards and popped up easily from low and high-ready positions.”

Daniel Defense’s backbone of this product line is the DDM4 carbine, which is offered in numerous versions. Calibers, barrel lengths, handguards, furniture—you name it and Daniel Defense has or can build an AR the way you want it.

One of today’s hot AR trends is KeyMod system handguards. Like most folks, I find that quad-rail handguards with accessories may get the job done, but two problems persist: Rails make the handguard bulky and heavy. This explains the popularity of smooth-sided handguards that allow users to add small accessory rails where needed.

Developed by Vltor and Noveske Rifleworks, the KeyMod system became open source to benefit everyone’s efforts and establish a standardized universal attachment system. The svelte KeyMod system is a rail-less, direct accessories attachment method promising virtual “return to zero” for the accessories. A final benefit is that the KeyMod openings cut into the handguards also help reduce weight for faster handling.

I really like the KeyMod system and its benefits. The system’s popularity continues to grow, and many companies are now offering handguards and accessories in this style. Daniel Defense recently released the DDM4V11 series of rifles with its newly designed SLiM (Slim Lightweight Modular) Rail 15.0, the company’s first rail system featuring the KeyMod attachment system. As a fan of Daniel Defense’s products, I recently jumped at the opportunity to test a DDM4V11 Lightweight (LW) with a 16-inch barrel.

Because the 5.56mm NATO is not an abusive cartridge, a heavy weapon is really not necessary. Unlike our warriors overseas, most LEOs will not carry a heavy pack and carbine for miles on end to get to a location. A lightweight rifle, on the other hand, is more pleasant to handle and more likely to be practiced with extensively.

“Some folks believe a lightweight barrel profile equals ‘lightweight’ accuracy because of the reduced barrel stiffness. But my work with the DDM4V11 LW disproved that theory!”

A good-looking carbine, the DDM4V11 LW is the progeny of the DDM4V9, sharing all of Daniel Defense’s pertinent AR traits. The mil-spec upper and lower receivers are CNC-machined from 7075-T6 aluminum and Type III hardcoat anodized. Some of the carbine’s special touches include an enhanced, flared magazine well, a QD swivel attachment point at the rear of the lower receiver, a top rail with indexing marks and M4 feed ramps.

The chrome-lined bolt carrier group is blessed with a properly staked gas key. Part of a mid-length gas system, the CNC-machined, 4140 hardened steel, low-profile gas block is given a phosphate coating and pinned into position. The cold-hammer-forged, chrome-moly-vanadium steel, 16-inch, Lightweight-profile barrel has a versatile 1-in-7-inch twist rate. The barrel is also chrome lined, phosphate coated and equipped with a Daniel Defense flash suppressor.

Surrounding the barrel is the 15-inch-long SLiM Rail. This Type III hardcoat anodized KeyMod handguard is CNC-machined from 6061-T6 aluminum. And this handguard was certainly named appropriately. Those with smaller or medium-sized hands won’t have to worry about getting a good grip around the SLiM Rail. There is an uninterrupted top rail, and running the length of the handguard in the 3, 6 and 9 o’clock positions are strips of KeyMod slots for attaching accessories. In addition to eliminating extraneous rails—saving ounces—these KeyMod openings chew out enough metal to contribute to Daniel Defense’s weight-loss program. In total, the handguard shaves 5 ounces and offers improved barrel cooling.

As on Daniel Defense’s quad-rail handguard, just in front of the upper receiver, the SLiM Rail has QD attachment points on both sides. With the KeyMod system’s increasing popularity, more and more compatible accessories are becoming available. By quickly and simply attaching a small length of KeyMod rail, users can hang what they want on the handguard.

Designed to center directly over the larger KeyMod opening (room for the QD’s shaft), the QD sling mount is the lowest-profile QD mount I have ever worked with. I also used BCM rail pieces to attach a few things missing the KeyMod capability.

Primary Weapons Systems (PWS) was nice enough to send several sections of its 2-inch KeyMod-to-Picatinny adapters and a Harris bipod adaptor. All of these are precision machined with the quality I expect from PWS. I attached one of Harris’ benchrest bipods easily.

For targeting I added a lightweight Aimpoint Micro T-1, which was backed up by Daniel Defense always-ready, tank-like iron sights. Finally, using one of the PWS rail pieces, I attached a Browning Blackout light in Daniel Defense’s Offset Flashlight Mount. With all of the high-lumen flashlights on the market, I wanted high output with lighter weight to complement the DDM4V11 LW. The Blackout worked well, blasting out 600 lumens—easily useable out to 200-plus yards—but weighing only 8 ounces with two CR123 batteries.

I evaluated the DDM4V11 LW over three range sessions. I really enjoyed working with the DDM4V11 LW, and found its light weight pleasant. The DDM4V11 LW snapped quickly from target to target during CQB drills out to 50 yards and popped up easily from low and high-ready positions.

Some folks believe a lightweight barrel profile equals “lightweight” accuracy because of the reduced barrel stiffness. But my work with the DDM4V11 LW disproved that theory! To test the carbine’s accuracy, I mounted a 3.2-17x44mm U.S. Optics LR-17 scope and found that its crystal-clear optics made shooting 100-yard targets almost like cheating.

Despite the mil-spec trigger, which weighed 6.1 pounds with some grittiness—not beneficial for ultimate target shooting—groups from three test loads were quite respectable. They all measured less than an inch, with the best coming in at 0.81 inches. These are five-shot—not three-shot—groups, requiring more effort for optimum performance. The mil-spec trigger worked well during CQB exercises and could be successfully pressed into service at longer distances.

As with other DDM4 variants, the DDM4V11 LW arrives with a Magpul PMAG. Magazines from nearly a half-dozen sources were unable to induce a hiccup. I could not find any way to get the DDM4V11 LW to falter, and all of this was with a “lightweight” package!

I really like Daniel Defense’s new glass-filled polymer furniture, with the comfortable Soft Touch overmolding and easy buttstock adjustment. Obtaining a solid cheekweld is easy—and easy on the cheek—without causing any neck strains. Daniel Defense has a reputation for waiting until it can do something right before offering something new, and the company’s new furniture is an excellent example of this.

I enjoyed everything about the DDM4V11 LW, including its lighter weight, trim handguard and easy, quick KeyMod accessory attachment system. With the lightweight barrel, the DDM4V11 becomes even more portable and easier to work with—something an officer guarding a perimeter or sprinting any distance to reach a problem will definitely appreciate. In fact, I suspect, given a choice, any officer would choose the DDM4V11 LW. 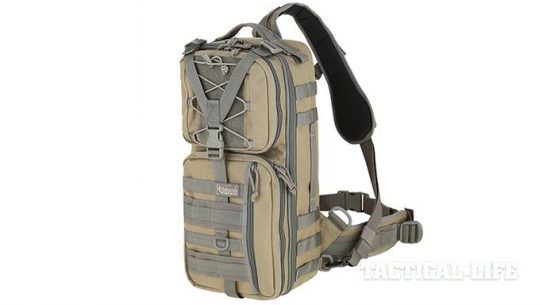 The Gila Gearslinger backpack from Maxpedition allows for the concealed carry of large handguns...