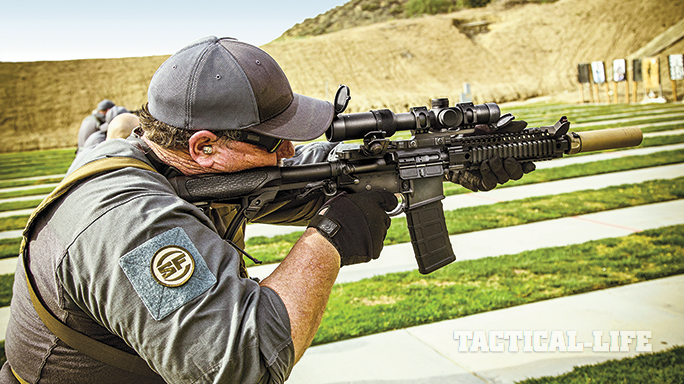 1 of 8
Gun Test: Daniel Defense’s MK18 5.56mm SBR
The author ran the Daniel Defense MK18 through training sponsored by SureFire, and the SBR never missed a beat, even after several hundred rounds. 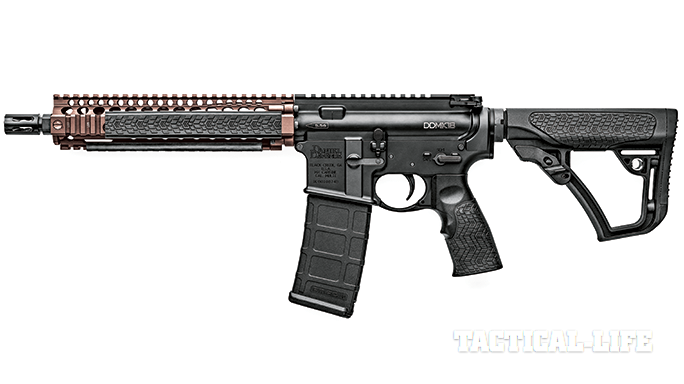 3 of 8
Gun Test: Daniel Defense’s MK18 5.56mm SBR
Daniel Defense’s new MK18 in 5.56mm NATO is built to replicate the same short-barreled rifle U.S. Special Operations Command warriors use in some of the harshest conditions imaginable. Like its SOCOM brethren, this gun will keep running — no matter what! 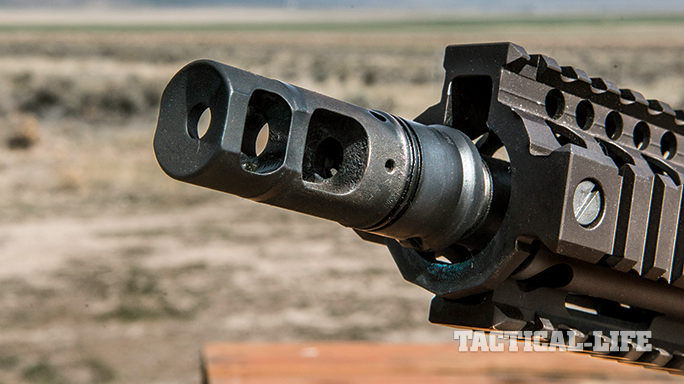 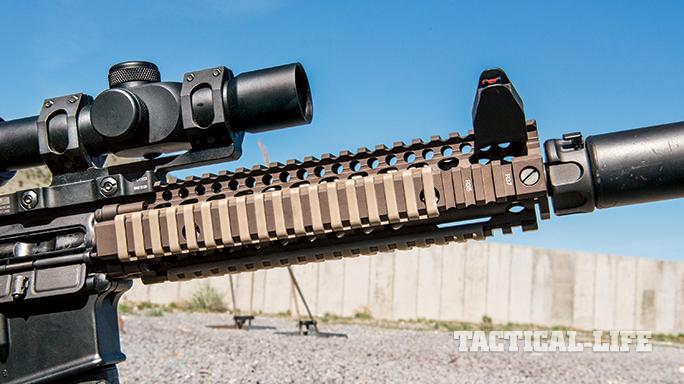 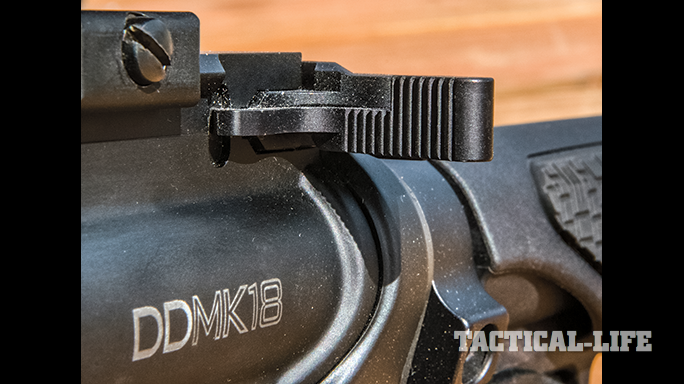 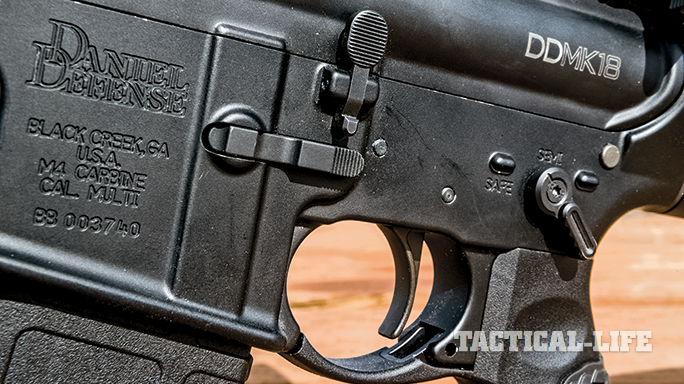 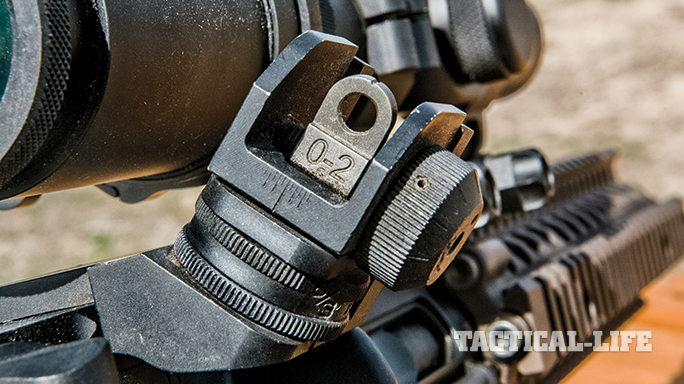 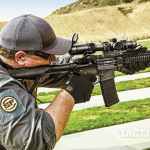 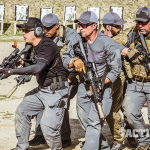 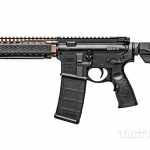 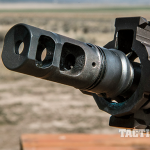 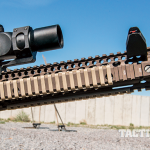 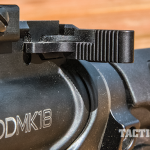 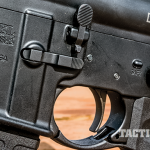 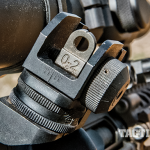 Making a direct-impingement AR work reliably with a short barrel can be a tough task. Many short-barreled ARs run much better these days, but it’s not always a given, especially with some ammunition. Most officers are assigned ammunition, which can make this even more problematic. Still, the advantages of a short-barreled rifle (SBR) are significant, especially when you’re working on an entry team. Sure, you can work in close quarters with a longer barrel, but it’s just easier with a 10-inch barrel. Piston-driven SBRs can be a bit more reliable, but they are generally more expensive. Direct-impingement AR rifles, on the other hand, are simple machines that are cost effective to buy or build.

Things get a little more complicated when you add a suppressor to a short barrel. Reliable operation with direct-impingement guns is largely dependent on proper bolt carrier timing, and suppressors can increase the bolt speed significantly. Suppressing a perfectly functioning short-barreled AR can turn the gun into a malfunctioning nightmare. Changing the buffer and buffer spring, or installing an adjustable gas block, can make it work, but it’s a process. It’s nice to have a rifle that just works and works without having to mess with it.

One of the companies doing an incredibly good job of this is Daniel Defense. I’ve tested several Daniel Defense weapons, and they’ve all worked very well right out of the box. The company’s ARs are simple, lightweight, direct-impingement guns available at reasonable prices. I recently attended a SureFire event that added another Daniel Defense rifle to the list of ARs that just plain work, even suppressed.

SureFire’s media events are known for their realistic testing of equipment. Avoiding the usual low-key events, SureFire tends to put the participants and equipment through actual training. This event was no exception—attendees went through Solutions Group International’s High-Risk Dignitary Protection course. Designed to familiarize police units with the basics of operating a dignitary protection team, it requires a weapon that truly works.

Daniel Defense provided the rifles for the event, and most had short barrels. All were equipped with SureFire’s SOCOM556-RC suppressors. Many of the rifles were Daniel Defense MK18 SBRs in 5.56mm NATO, including the one I used. Each was equipped with a U.S. Optics SR-8C 1-8X scope and Dueck Defense sights. Equipped with an illuminated 8C Mil reticle, the SR-8C is designed for both close quarters and longer ranges. Since the MK18 performed so well during the event, I ordered one for more thorough testing at my home range.

The MK18 is a factory SBR available to all who can legally possess them, and it’s built to the same specifications as its select-fire military and police equivalent. It starts with a Daniel Defense forged upper receiver mated to a 10.3-inch, cold-hammer-forged, chrome-lined barrel with a 1-in-7-inch twist rate and a 5.56mm NATO chamber. It also has M4 feed ramps for reliable functioning in harsh conditions. The barrel is capped with an A2-style flash suppressor, but SureFire SOCOM muzzle brakes/adaptors are available upon request.

Gas is channeled through a CNC-machined 4140 steel gas block as part of the carbine-length system. Surrounding the barrel and gas system is Daniel Defense’s MK18 RIS II handguard, which the company supplies to USSOCOM. Available in black or Flat Dark Earth, the lightweight RIS II handguard provides lots of rail space along with QD sling cups. Rounding out the upper receiver is an M16-profile, magnetic-particle (MP) tested, chrome-lined and properly staked bolt carrier group.

For testing at my home range, I used my Daniel Defense mil-spec lower, which is licensed for SBR use. These lower receivers are machined from 7075-T6 aluminum and include a flared magazine well and QD swivel attachments at the rear. Daniel Defense’s complete MK18 rifles feature the company’s new collapsible stock and pistol grip, which feature attractive and functional rubber overmolding for enhanced control. My personal Daniel Defense lower is equipped with an ambidextrous magazine release, a PWS buffer tube and a Geissele Super Semi-Automatic (SSA) two-stage trigger.

My test rifle also came with a SureFire SOCOM muzzle brake, so I attached my SureFire SOCOM762-MINI sound suppressor. U.S. Optics let me take the SR-8C scope I used at the school back with me to thoroughly test the MK18. I also kept the Dueck Defense offset sights in place to round out the package. In all, my test rifle was configured as closely as possible to the one I used during the SureFire event.

During the High-Risk Dignitary Protection course, my issued MK18 ran flawlessly. The suppressor was attached throughout the course, too. There were no malfunctions, even under some pretty intense fire. The SOCOM556-RC is a rugged suppressor built specifically for a military contract. This is the second time I’ve used a short-barreled Daniel Defense AR with this suppressor, and the utter reliability always amazes me. As I said, some 10-inch-barreled ARs, suppressed or not, can be unreliable. But that just does not seem to be the case with Daniel Defense rifles. Shooting high round counts in a direct-impingement gun with a suppressor can really gum up the works, and the rifles we used during the course got pretty dirty, but they kept on working.

Most of our shooting was in close quarters, from 50 yards and in. Using the U.S. Optics scope was pretty easy. At really close range, turning on the lighted reticle essentially gives you a red dot to work with. With the scope’s 3.7 inches of eye relief, it was possible to get a solid sight picture, even working around obstacles and in some very unconventional positions. The scope on my MK18 never had an issue, and it still works perfectly after several subsequent tests.

Back at my home range, the only real difference in MK18 configurations was the use of a .30-caliber suppressor—a short one at that. If there was any difference in function, it was less gas in the action and a bit slower bolt speed. I prefer to run this SOCOM762-MINI on 5.56mm rifles, especially if they have shorter barrels. Sure, this setup is not as quiet, but it’s lighter, shorter and cleaner. It is plenty quiet for operations, and the SOCOM762-MINI is very strong. There was also no discernible shift in the point of impact at 50 yards, and any at 100 yards amounted to less than an inch overall.

This MK18 functioned just as well as the one I used during the training—not a single issue, even under some pretty significant rapid-fire strings. If you’re going to burn ammo quickly, make sure you wear gloves; it will get hot. The suppressor mated up very closely to the forend, making for a short overall package. The MK18 was very handy and fast on target. And it stayed on target with little or no recoil.

The MK18’s accuracy proved to be excellent, with my best group measuring a tad over an inch at 100 yards using Silver State Armory’s 64-grain PPT round. Since this round is just about perfect for duty use, it was a nice match. Everything fell right around an inch and a half, with the largest group measuring just under 2 inches. All of the ammo ran without issue.

Removing the suppressor, the SOCOM muzzle brake did its job well, keeping the rifle on target. It is just really loud on its own, however, so if this is a duty gun, opt for the version that comes with a flash suppressor—one that will reduce your flash signature without taking the guy next to you out of the fight.

The U.S. Optics SR-8C has really grown on me. Having the 8X magnification is nice for identifying threats, and it provides all of the magnification you will ever need. Set at 1X with the illuminated reticle, the SR-8C works pretty much like any red dot. Over time, I find my field of view actually less obstructed and clearer with optics. It can be a bit harder to get a perfect sight picture, but when you do, it is clearer, especially if the scope is a truly parallax-free 1X.

Daniel Defense’s short-barreled guns are the most consistently reliable I’ve tested. There are certainly others that work, but every Daniel Defense SBR I’ve tested has worked, even suppressed. They are lightweight, reliable, well built and reasonably priced, and the MK18 is no exception. 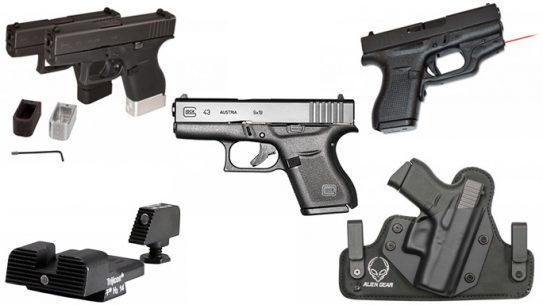 G43: Must Have Accessories For Glock’s New Single-Stack

Holsters, sights, magazine extensions and more -- there is an endless array of accessories...