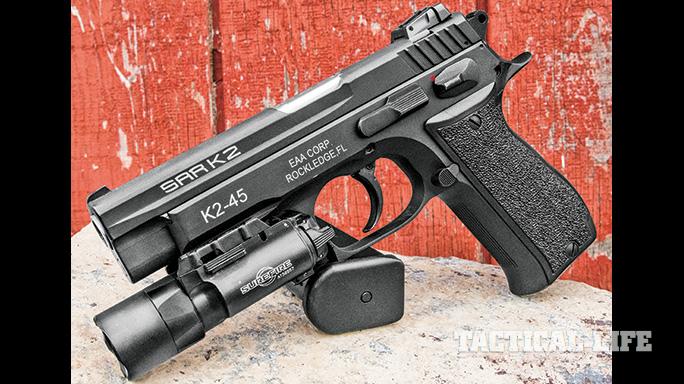 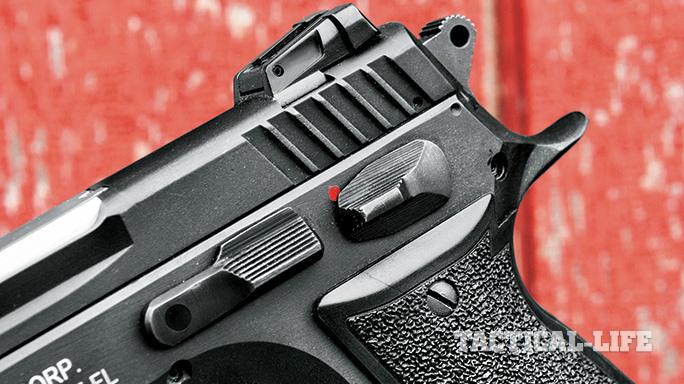 2 of 8
Gun Test: EAA Sarsilmaz K2 .45 ACP Pistol
The left-side-mounted safety and slide release are both large and easy to reach. 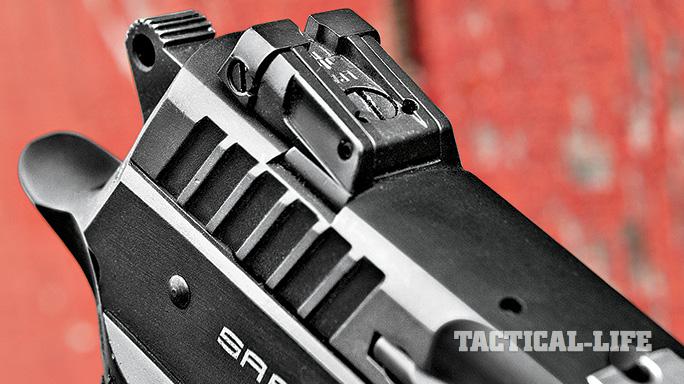 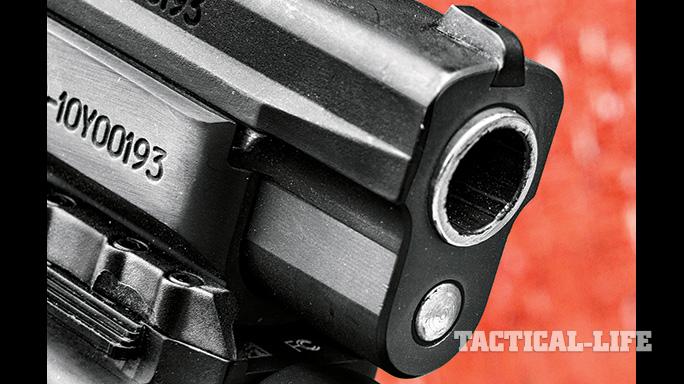 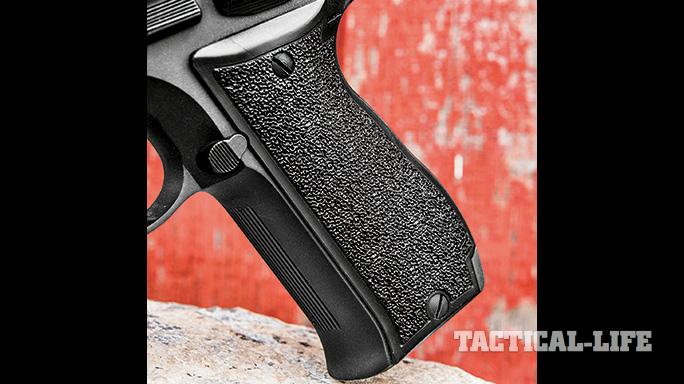 5 of 8
Gun Test: EAA Sarsilmaz K2 .45 ACP Pistol
The polymer grip panels are checkered while the frontstrap is serrated for a secure hold. 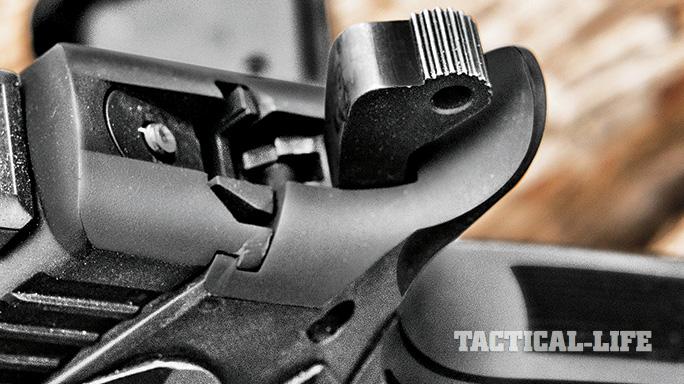 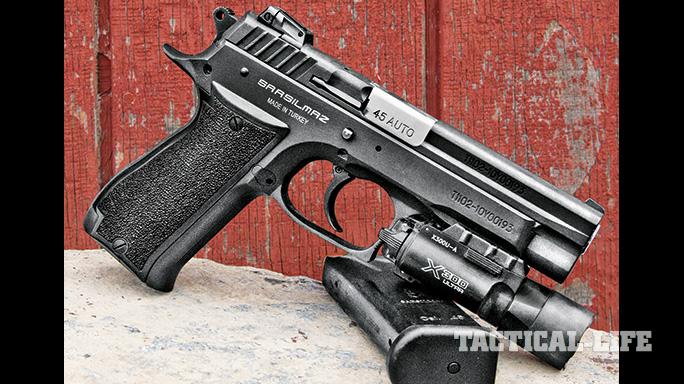 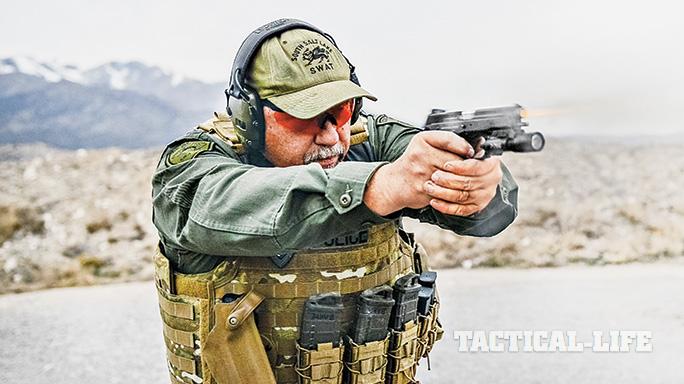 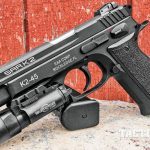 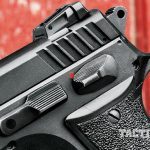 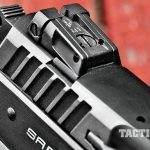 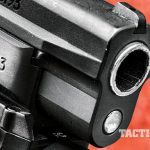 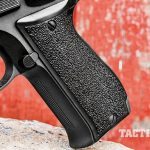 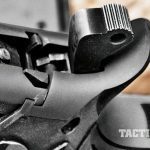 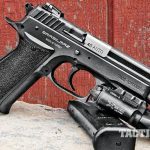 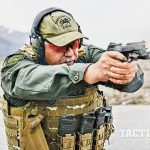 These days, it’s become pretty common for me to use less-than-typical firearms during training courses and duty qualifications. One of the perks of being retired from law enforcement is no longer having an issued weapon. And there is just something supremely satisfying about outshooting the person next to me on the range using the latest and greatest “uber” pistol or “anointed” rifle.

Too often, people choose their weapons based on emotion or superstition, which leads to tunnel vision. Firearms are tools, and no single manufacturer has a lock on building good ones, nor are they limited to two or three countries of origin.

My Sarsilmaz K2 in .45 ACP, imported by European American Armory (EAA) Corporation, is just such a pistol. It was quite the surprise to me when I originally tested it in 2011. While I’m pretty open minded, when it comes to firearms, the idea of a solid, duty-capable pistol coming from Turkey just seemed unlikely, let alone one that could be used as a tactical pistol. After a few magazines, it became clear that my skepticism was unwarranted. I used the K2 at several training schools where it drew occasional ire as it stayed with or outperformed the most common tactical pistols of the day. Revisiting this pistol recently only reconfirmed my initial findings. It remains one of the most accurate and reliable double-stack .45 ACP pistols I’ve used in recent history.

Since my initial test in 2011, I’ve toured Sarsilmaz’s factory firsthand in Turkey to confirm its state-of-the-art operations. Rivaling many of the weapons factories I’ve toured in the U.S., Sarsilmaz has some of the most advanced equipment available today. The factory, situated a couple of hours from Istanbul, is simply huge, brand new and truly cutting edge with seven CNC machines, 21st century logistics and highly skilled craftsmen. The entire plant was spotless, more like a medical supply facility than a gun factory. It was easily one of the best-looking weapons plants I’ve ever visited.

During my tour, it quickly became apparent that Sarsilmaz takes every step in its build process with the greatest attention to detail. All of its parts start from forgings—no castings. Most everything is made in-house to incredibly tight tolerances, and experienced gunsmiths assemble every single weapon. Of course, this results in some truly excellent firearms. As the supplier of pistols to the entirety of the military and police in Turkey, these are proven weapons with a long track record.

The Sarsilmaz K2 is a combat pistol built for the Turkish military. My test pistol was chambered in .45 ACP, though there are also 9mm versions in Turkey. The pistol is rather broadly based upon the CZ 75, one of the most prolific and proven pistols around, especially in Europe.

Picking this pistol up, it fits nicely in my large hands. The polymer grips are stippled and contoured, and the front and backstraps are grooved for enhanced control. The squared triggerguard is large with a checkered face. The beavertail is large and high-swept for a very solid grip. The K2’s design places the bore axis very close to the hand, making it very easy to control.

The slide has serrations at its rear and is fitted with an LPA adjustable rear sight as well as a fixed front sight. Both contain very bright and visible white dots. The rear sight is adjustable for both windage and elevation.

The K2 also features a Commander-style hammer and a crisp double-action/single-action (DA/SA) trigger. While dry firing, the trigger’s reset was predictable with just a bit of creep prior to breaking. Drop the hammer and run the trigger in double action and it is smooth, not terribly heavy, yet very predictable. Using an NRA-approved trigger weight, the trigger broke cleanly at 9 pounds in double action and 4.25 pounds in single action, which is very well suited to a combat pistol.

The K2 in .45 ACP also has a rail that accepted my SureFire X300 as well as a couple of other lights in my possession. Finally, it has a nice matte black finish.

This pistol has seen a ton of use over the last several years. After its initial testing in 2011, I took it with me to several pistol schools and used it frequently as a secondary weapon during tactical and rifle training. It can be used as a DA/SA pistol, but my preference is to carry it as a single action. Its controls are almost identical to those found on a 1911. Similar to the CZ 75 and other European-style pistols, it can be safely decocked. Carried “cocked and locked,” the K2 is basically a 1911 with a second-strike capability.

For testing, I carried the K2 in a Safariland SLS holster designed for use with the SureFire X300 light mounted, which was just about perfect. The K2 also fit in my Safariland SLS rig designed for a 1911 equipped with a SureFire X400. It fit tightly at first but worked very well on the range.

This pistol’s accuracy has always been rather jaw dropping. During a CorBon pistol class a few years ago, it consistently printed 1-inch groups at 25 yards. Moving to 15 yards and shooting off hand, it just cut one large hole. My test groups this time around yielded similar accuracy, with Sig Sauer’s 200-grain V-Crown ammo clustering into a group measuring just a tad over an inch. Much of the K2’s accuracy is due to how softly it shoots; its low bore axis makes it pretty easy to control. The dual recoil spring assembly also helps to soften the recoil. There are a couple of double-stack .45s in my inventory that cost three times as much but are no more accurate than the K2.

With well over 10,000 rounds of every conceivable type of ammunition run through this pistol, it has never missed a beat. It has become a workhorse for me. The magazines are metal, and they have performed flawlessly to date. For this test, I ran the pistol through several drills, including transitions, while wearing my Survival Armor vest. Ammunition ranged from some very old PMC and steel-cased loads, to some newer Black Hills 230-grain rounds, along with a few duty rounds. The K2 just keeps on running—dirty, clean, no matter what.

As long as you are OK with white dots, these sights are excellent. The front sight is pinned in place. The LPA rear sight is dovetailed and adjustable for elevation using a screwdriver. Both dots stay visible even when dirty. Night sights are a tad controversial—some swear by them while others think they’re useless. Sarsilmaz makes them for this pistol in Turkey; time will tell if they are imported.

Mated to a tactical light and carried in single action, I would not hesitate a second to carry the K2 operationally. It’s accurate, reliable and comfortable to shoot, rivaling some of the more mainstream pistols I’ve carried over the years. In fact, this pistol is as reliable, accurate and dependable as any I’ve ever carried.

Is the K2 likely to see work as a department pistol anytime soon? Not likely, but not because it lacks the capability. Choosing standard-issue pistols is far more complicated than just picking one that works. Working in a small agency where personal choice is possible, it could certainly do the job.

This is no small pistol, so large hands help, and it’s all steel. In other words, it’s no lightweight. Concealed carry is possible if you are accustomed to larger pistols, but that is not its sweet spot. Home defense is another place this pistol would work well. Safely drop the hammer and you have a solid go-to pistol with excellent reliability and solid capacity using a proven round.

One thing is for sure: This pistol remains a favorite of mine to shoot, and I will continue to use it at training courses where possible. 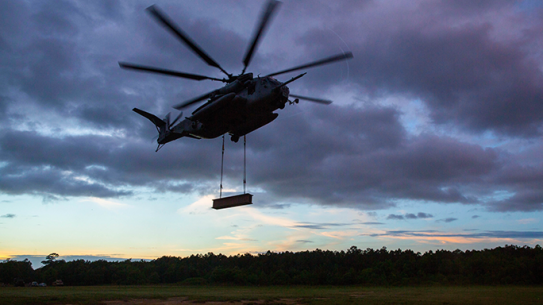