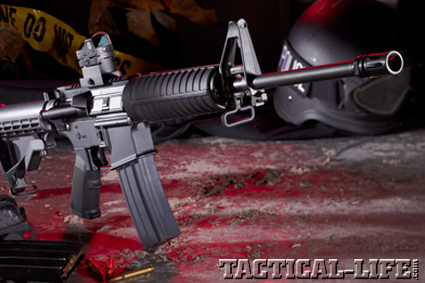 1 of 9
Franklin-6
Franklin Armory builds the LTW with a lightweight-profile barrel for faster handling on patrol. Shown equipped with a Bushnell First Strike sight. 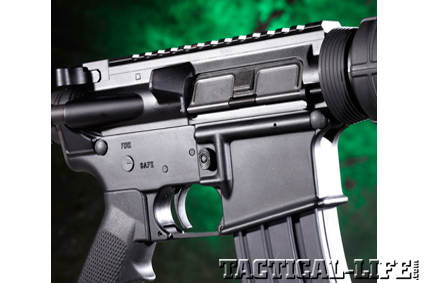 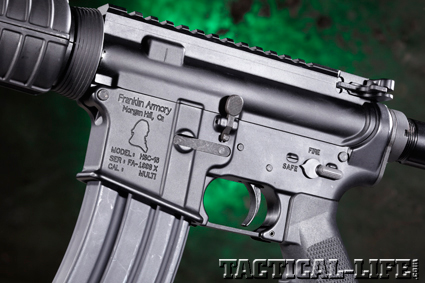 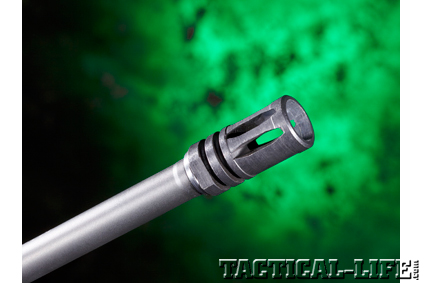 4 of 9
Franklin-4
Capping off the LTW’s 16-inch 4140 chrome-moly steel barrel is an A2-style flash suppressor that reduces its visual signature. 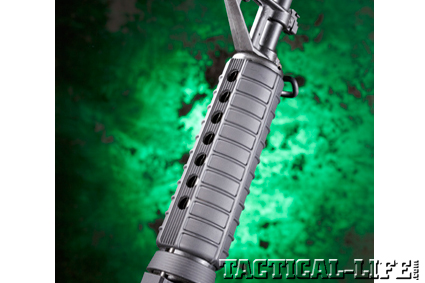 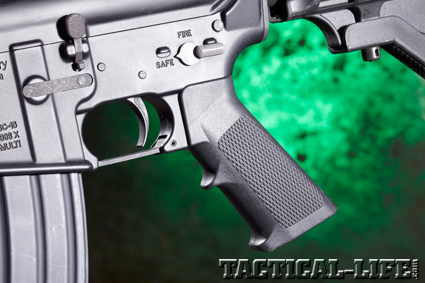 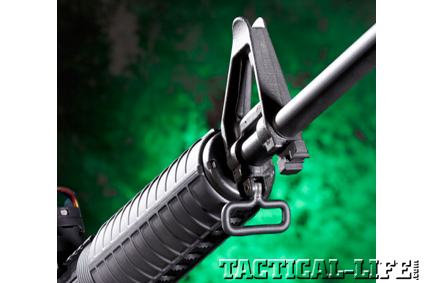 7 of 9
Franklin-8
The sturdy fixed front sight tower incorporates a bayonet lug and a sling swivel. 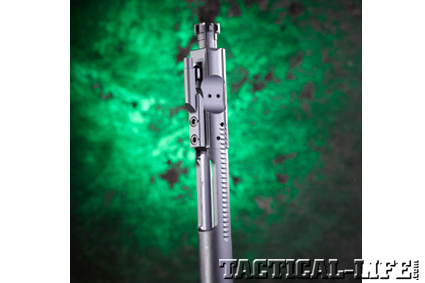 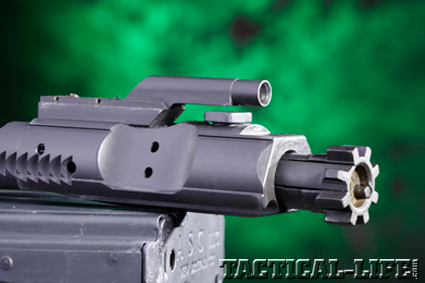 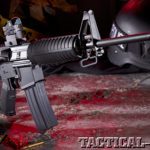 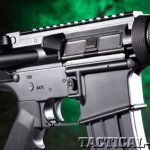 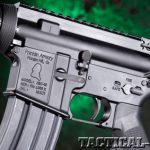 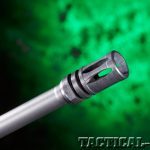 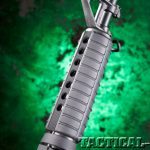 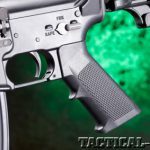 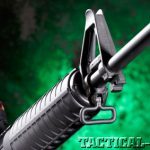 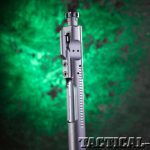 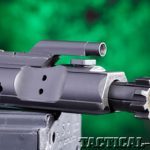 Law enforcement officers seem to be always looking for a good deal, trying to buy as inexpensively as possible. Considering the job is not known for overpaying, that should come as no surprise. However, scrimping on equipment is always a bad idea. Shoes, lights and firearms, to name just a few, should not be bought on the cheap, but chosen for excellent performance at the best price. (We called the former a “low bid” and the latter smart!)

On the topic of firearms, as hot as the AR/M4 platform has been for a number of years now, it is not surprising to see new versions and new companies popping up. Manufacturers have seemingly ramped their production to the maximum—and an extra 10 percent beyond—in an effort to meet the skyrocketing demand. Everybody who can put parts together to build upper and lower receivers is doing so and selling the results like hotcakes—hotcakes priced as filet mignon.

Buying durable critical equipment may necessitate doing a little research and saving or borrowing before purchase, but, in the end, paying for quality will certainly prove a better deal than repeatedly replacing poorer-quality items. There is no reason to risk safety with substandard weapons, and today, the AR has reached the point of being critical equipment.

It is not always necessary to turn to the “big name” companies when an officer’s need for an AR arises. Quality products can be had from companies that don’t
fall within the “big-name group.” The search for a smaller shop offering ARs and AR “pistols” may take an officer to unexpected places, such as California, where Franklin Armory resides.

Founded about four years ago, Franklin Armory’s original mandate was to produce “legal firearms for restrictive jurisdictions such as California.” In the years since, the company has expanded into firearms for less-restrictive, “free” states. Each firearm is hand-built and has several noteworthy attributes going for it. Franklin produces all of its firearms using only American-made parts and materials, and each rifle features “a custom-tuned, single-stage Franklin Armory trigger.” Finally, before any firearm leaves the factory, the company’s president, Jay Jacobson, personally tests it. The Franklin Armory LTW is no exception.

Franklin Armory’s LTW features many of today’s desirable AR attributes. The 16-inch, lightweight-contoured barrel has a 5.56mm chamber and is treated inside and out with a black, salt-bath-nitride finish, which hardens all of the barrel’s metal to 60 Rockwell to a depth of 0.040 inches. The barrel has a 1-in-9-inch twist rate, which should be perfect for the traditional, near-55-grain bullet weights commonly used for practice and which perform so well at the typical distances patrol carbines will be deployed. Surrounding the LTW’s 4140 chrome-moly steel barrel, with its carbine-length gas system and A2-style flash suppressor, is a CAR-type polymer handguard with aluminum liners.

The LTW’s upper and lower receivers are forged from 7075-T6 aluminum and then given a black Type III hardcoat anodizing. The flattop upper receiver’s rails have white indexing marks for easily returning any optics or sights that have been removed. No sights ride the flattop upper or the low-profile gas block that comes standard. I have an increasing fondness for fixed sights (or folders left in the upright position) and requested that the LTW be shipped with the optional forged front sight gas block, which includes a front sling swivel and an integral bayonet lug.

Two notes about this sight choice: A fixed front sight is unlikely to be accidentally folded when it should be up, and it certainly should not break! For law enforcement work, unlike target shooting or plinking, having an electronic optic suddenly fail can prove fatal if the rifle lacks immediately usable backup sights. I dropped one of GG&G’s rear sights on the top Picatinny rail.

The LTW’s lower receiver features an A2-style pistol grip, a standard triggerguard, a specialized tension screw from Franklin Armory (which extends from the lower to press against the upper receiver and absolutely eliminates play between the two receivers) and the single-stage Franklin Armory Custom Tuned Trigger. The trigger performed nicely for a factory-direct model, breaking crisply at 4.5 pounds. It deserves the “Custom Tuned Trigger” moniker, but it’s not light enough to present a problem during the adrenaline rush of an armed confrontation.

Additional items included with the LTW package are an M4-style, six-position collapsible stock and an ASC 30-round magazine. A sling can be threaded through the sling loop on the toe of the buttstock or through a horizontal slit near the rear of the buttstock. The Marlube-coated stainless steel magazine features an anti-tilt follower. Everything arrives in a nice ballistic nylon bag from Bulldog Tactical Equipment.

In view of the patrol rifle’s various potential applications, I have a few accessory requirements I consider necessary. A good optical sight is a must, allowing law enforcement officers to quickly acquire a sight picture and, because most are parallax-free, make shots from less-than-optimal positions. To that end, I added Vortex’s 2-MOA SPARC red-dot sight. This compact, durable, sharp-view sight works great and includes an optional elevated mounting base for co-witnessing with backup sights.

Without a sling on a patrol carbine (or any long gun destined for law enforcement use), doing anything requiring two hands—handcuffing, wedging doors open or closed, etc.—becomes impossible unless the officer is willing to relinquish their firearm. I continue to be amazed by the number of officers who don’t seem to understand this. To that end, I attached a Giles Tactical Sling from The Wilderness to the LTW’s fore and aft sling-attachment points.

My final addition to the LTW was a weapon-mounted light. You can’t shoot what you can’t see, and the odds always favor an encounter occurring in low-light conditions. There is a neat and easy way to attach a light in a forward position on this AR: Elzetta’s ZFH1500, the company’s Tactical Flashlight Mount for the AR-15 family. The ZFH1500 attaches to a front sight base with or without a bayonet lug. An Elzetta handheld light can then be easily attached to the mount.

For accuracy testing, I mounted my Leupold 4.5-15x50mm VX-3 riflescope in a LaRue Tactical SPR/M4 QD mount. The VX-3 is crystal clear and always excellent to work with for these tests, and the LaRue mount is a quick and easy way to get the scope from one carbine to another.

The LTW’s accuracy did not prove to be bullet-weight dependent, as I had expected. I wanted to see just how far up the bullet-weight chain the LTW’s 1-in-9-inch-twist barrel could go while maintaining good accuracy, so I went a little higher than normal. As shown in the accompanying performance table, the Wilson Combat 65-grain Match Grade SBT load produced an average five-shot group size of 0.74 inches, with its smallest group measuring 0.68 inches. Its velocity averaged 2,903 feet per second (fps). For the 62-grain Hornady TAP and the 55-grain Barnes Vortex ammunition, group averages were 1.07 inches and 1.51 inches, respectively, with the smallest group for each load measuring 0.99 inches and 1.35 inches. The 62-grain Hornady TAP had an average velocity of 3,023 fps, while the 55-grain Barnes Vortex ammo produced an average velocity of 2,986 fps.

For a 16-inch-barreled AR with a trigger breaking at 4.5 pounds, the LTW shoots quite well. In fact, it shoots on par with a number of more costly ARs with “target” triggers. Franklin Armory’s LTW will have no problem easily filling the role of a patrol rifle, where most shots will be fired to distances under 50 yards. For the 100- or 200-yard anomaly, the LTW can handle those shots readily, too, if it’s wearing good glass.

With the SPARC red dot riding in place of the Leupold scope, I discovered that the LTW worked well around vehicles, external cover and in buildings. Slow and rapid fire at 7 to 35 yards was a snap, with no bobbles. I appreciated the lighter weight of the LTW as the day wore on. I also used a variety of magazines from makers other than ASC during the evaluation and did not experience a single problem.

In the LTW, Franklin Armory has a workhorse that easily makes the grade as a patrol carbine. It has all the critical components: It’s compact, adjustable, accurate and dependable, and it possesses every feature a patrol carbine could need. If an LEO wants something else—well, it’s an AR. Just add to it! For more information, visit franklinarmory.com or call 408-779-7560. 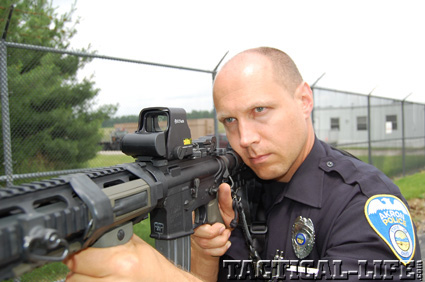 EOTech HWS units are excellent tools proven in use by law enforcement and the...