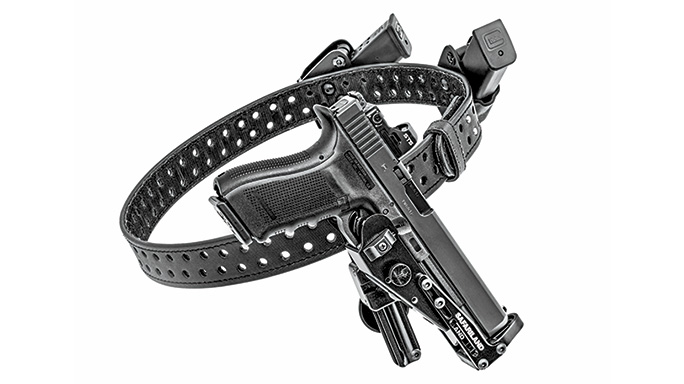 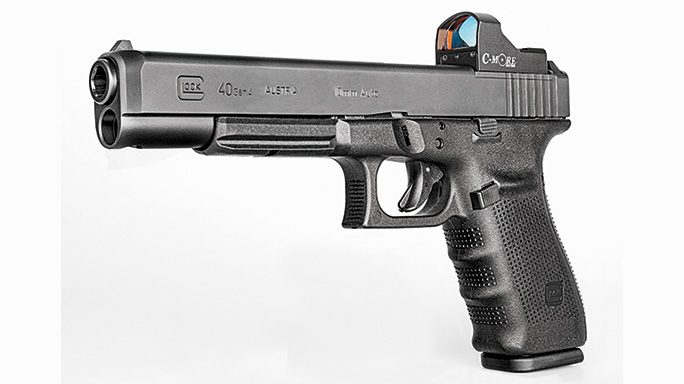 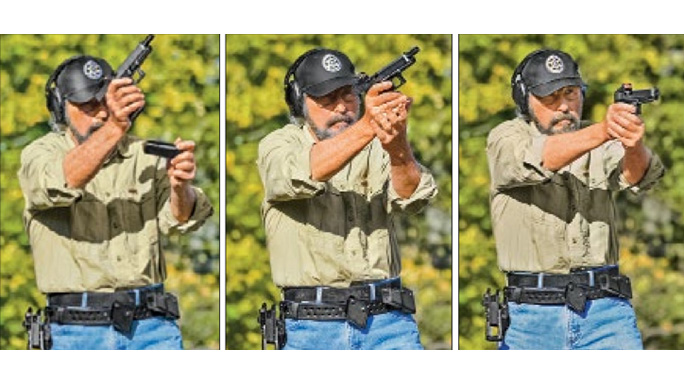 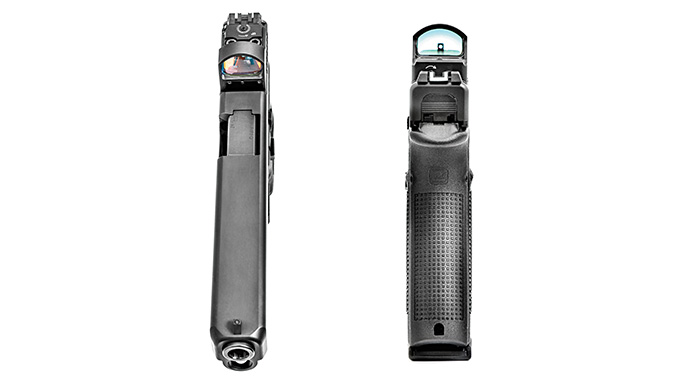 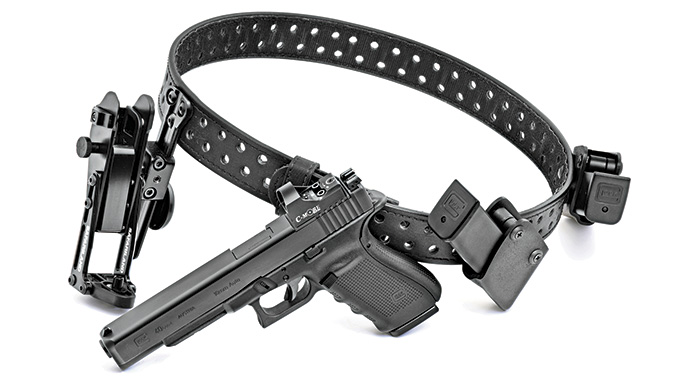 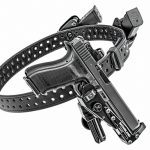 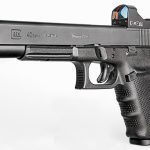 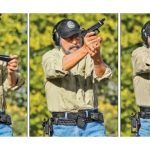 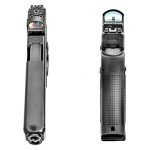 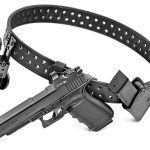 Firearms training is one of the great essentials in self defense preparation, and competition shooting can strengthen those skills. That was one of the founding principals of the original Bianchi Cup competition, the United States Practical Shooting Association (USPSA) and International Defensive Pistol Association (IDPA). This also applies to specific classifications in International Practical Shooting Confederation (IPSC) competitions.

Competing with your duty gun can be an excellent skill strengthener, but sometimes a duty gun and a truly competition-capable pistol are mutually exclusive. This is one thing that will never be said about the new Glock 40 Gen4 in MOS Configuration chambered in 10mm Auto.

The 10mm Auto round was initially developed for the FBI and law enforcement use in 1983, though today it is mostly used by SWAT, hostage rescue and special response teams in law enforcement as well as some special operations elements in the military. (The FBI’s Hostage Rescue Team and SWAT teams still use the 10mm, but not field agents.) The 10mm has actually become quite popular as a hunting handgun caliber in the civilian world. The Glock 40 Gen4 in MOS Configuration then fills an interesting niche where precision, thanks to its Modular Optic System (MOS) capabilities, and firepower are essential: tactical missions, hunting and competition.

To say that the G40 Gen4 is twice the gun of Glock’s original 10mm pistol, the G20, would be a bit of an overstatement, but not by much. Introduced in 1990, the G20 was a standard service model Glock (like the G17) except with a slightly longer 4.6-inch barrel and overall slightly enlarged dimensions. The result was a powerful pistol in a reasonably sized package. Glock also began offering a 6-inch “hunting barrel” for the Glock 20 pistol as sportsmen were beginning to gravitate to the hard-hitting 10mm Auto round.

Glock had enough success with its first 10mm Auto model to add a subcompact version, the G29, in 1996, and to upgrade both the G20 and G29 to Short Frame (SF) versions in 2009. Three years later, the G29 was among the models reintroduced in the Gen4 series, thus Glock’s 10mm lineup is very well established.

The new G40 Gen4 in MOS Configuration actually brings Glock’s 10mm stable full circle with its longer 6.02-inch barrel, a recalibrated trigger and all of the Gen4 internal and external upgrades, including a dual recoil spring assembly engineered to help diminish felt recoil. Glock’s use of polygonal rifling in its cold-hammer-forged barrels also allows a more precise bullet-to-barrel fit to attain the maximum velocity and accuracy potential from 10mm Auto rounds. These are all highly regarded features, and bringing the 6.02-inch barrel length to the field further expands the potential for this high-velocity, hard-hitting chambering.

Among key external features for the G40 Gen4 are the new slide and MOS system. The slide is milled and fitted with a removable cover plate that is interchangeable with one of four optics-mounting plates designed to seat a variety of miniature reflex sights from Leupold, Trijicon, C-More and EOTech among others. This lowers the sight base to be more in line with the bore, rather than having a base that is mounted on top of the slide. This MOS design also eliminates the need to remove the rear sight, thus the gun can be quickly changed back to open sights by removing the optics base and replacing the standard cover plate. With an overall length of 9.49 inches, the G40 Gen4 in MOS Configuration also offers an unprecedented 8.19-inch sight radius between the standard white-dot front sight and white-outlined rear sight.

I chose to add a C-More STS (Small Tactical Sight), which used the Number 3 mounting plate. Each of the mounting plates contains the top edges of the slide serrations so they have a fully integrated appearance rather than looking like something added on to the top of the slide. The only thing I would do differently, if I were going to keep optics mounted on the gun full time, would be to change the front and rear sights to suppressor-height (i.e., taller) white-dot units that would co-witness with the reflex sight. This makes sighting just a little quicker, and in the event of a battery or optics failure, you still have functioning iron sights without having to remove the reflex sight.

The G40 Gen4 is a perfect tactical weapon but, according to Glock, it is aimed at sportsmen “to give the handgun hunter the ultimate choice in [a] semi-automatic gaming pistol…proven to be more than capable of taking down game such as whitetail deer, russian boars and even feral hogs.”

Even as a large-caliber handgun, the G40 in MOS Configuration has an unloaded weight of only 28.15 ounces, meaning it weighs less than a Colt Delta Elite while having nearly twice the capacity. The Gen4 grip texturing and Multiple Backstrap System allows the gun to be tailored to the operator’s hand size (and changed as situations demand, such as wearing tactical or cold weather gloves). Without attaching one of the backstraps, the grip is 2mm smaller than Gen3 models. This works for the vast majority of operators with small- to medium-sized hands. The medium and large backstraps run from the base of the magazine well to the top of the gripstrap, thus changing the entire backstrap configuration by 2mm or 4mm, respectively. In addition, my test G40 Gen4 in MOS Configuration came with optional medium and large beavertail backstraps that increase the grip size and add an extended beavertail below the slide. For use in competition, this is a definite enhancement.

I opted for the medium beavertail backstrap, since I wanted to focus on using this gun in competition. Another plus for competitions and tactical situations is that the G40 Gen4’s magazines are fully metal lined for smooth, drop-free reloading.

The Safariland Model 014 Open Class Competition Holster I used for this test is constructed out of aluminum for lighter weight. The rig is built to stabilize the handgun and offers little resistance for a secure and fast draw. The holster features a patented, adjustable, injection-molded triggerguard lock, and the front nosepiece is designed to retain the handgun and help prevent it from being knocked out of a holster while seated. The Model 014 is designed to fit multiple guns, from standard-length pistols to handguns with longer barrel/slide combinations or compensators simply by adjusting the length of the carriage with four hex-head locking screws. The cant and inward/outward angle are also fully adjustable so the Model 014 holster can be specifically tailored to the individual shooter.

I mounted the holster on Safariland’s Model 032 ELS Competition Belt, which uses the company’s Equipment Locking System (ELS) forks and plates for mounting holsters and accessories (or with the hex-head screws). The belt features two rows of pre-cut holes running its full length to facilitate easy and precise adjustments. The holes also allow mounting of two or more competition magazine holders, which can be positioned to your desired angle and spacing.

On The Firing Line

I selected three 10mm brands and bullet types to evaluate the G40 Gen4 in MOS Configuration from tactical and competition perspectives: Federal American Eagle 180-grain FMJs, Remington 180-grain MC rounds and Federal Premium 180-grain Hydra-Shok JHPs. I used a ProChrono chronograph positioned 10 feet from the muzzle to record velocity data, and the 6.02-inch-barreled Glock sent Remington’s 180-grain MC rounds downrange at an average of 1,145 fps. The Federal American Eagle FMJs clocked 1,055 fps, while the Federal Premium 180-grain Hydra-Shoks flew at 1,030 fps. The trigger pull on the test gun came in a little heavier than average for a Glock at 6.55 pounds, but it still had a crisp break like every Glock I’ve tried.

It only took six rounds for me to zero the C-More sight at 25 yards, and I fired all shots off-hand in one-second intervals from a Weaver stance. I know that’s not a competitive rate of fire, but this was an evaluation, not a shooting match. In the hands of a competitive shooter, this gun could probably work some magic, because in my hands, I was able to cluster five Remington rounds into 1.24 inches in the A-zone of an IPSC target. Firing on a Speedwell B-27 target from the same distance, the Remington load again delivered the best five-round group at 1.23 inches. The best Federal Hydra-Shok group measured 1.28 inches, while the best Federal American Eagle group was 1.5 inches. Overall, all of the groups throughout the test averaged 1.5 inches.

The G40 Gen4 in MOS Configuration is definitely an enhanced powerhouse for shooters who want to carry a pistol that is tactical, practical and competitive. Glock also offers its MOS Configuration for its Gen4 G34, G35 and G41 pistols. Any and all of them are definitely worth a close look. 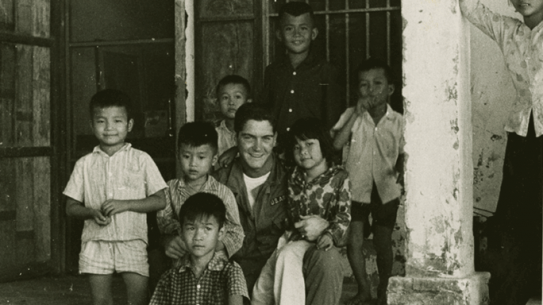 Harold D. Wright, a veteran of the Vietnam War, talks about what being a...