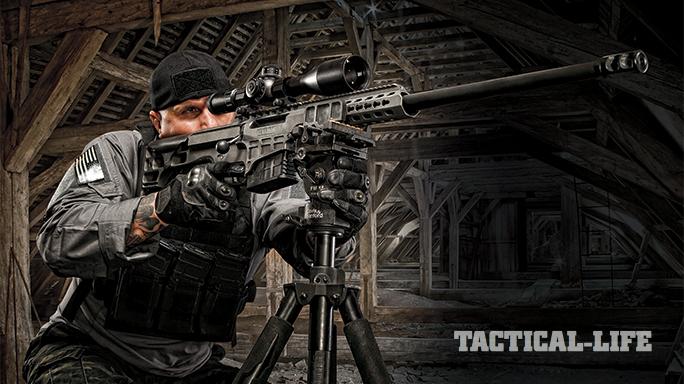 1 of 5
Gun Test: Barrett 98B 300WM
Barrett’s 98B Tactical brings bolt-action precision into the 21st century. Shown with a Kahles 6-24x56mm K624i scope, a Shadow Tech Hog Saddle and a Davis & Sanford tripod. 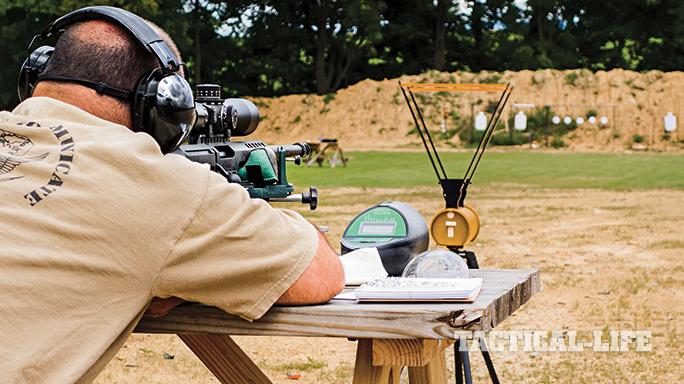 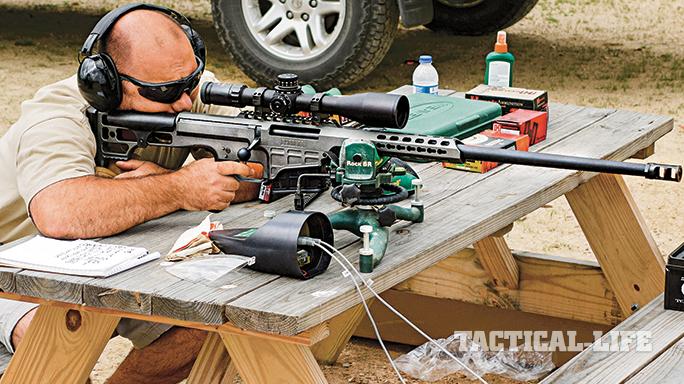 3 of 5
Gun Test: Barrett 98B 300WM
The rifle operated very smoothly during testing, from its slick action to its easy-to-load magazines and crisp trigger. 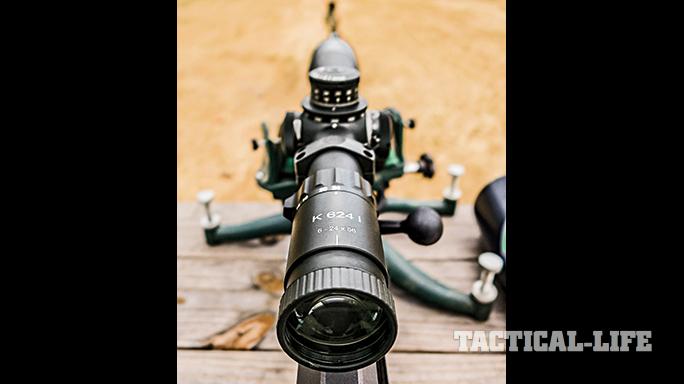 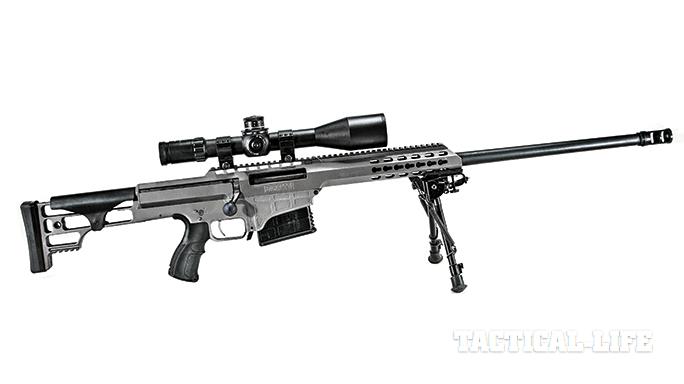 5 of 5
Gun Test: Barrett 98B 300WM
Barrett’s 98B Tactical brings bolt-action precision into the 21st century. 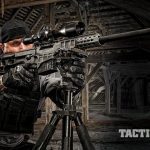 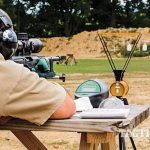 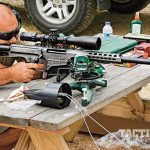 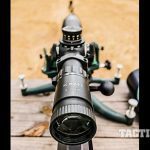 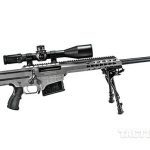 If every shooter was introduced to the .300 Winchester Magnum via Barrett’s 98B Tactical rifle, the peppy but inferior .30-06 wouldn’t be America’s sweetheart caliber. That’s how smooth, accurate and polite Barrett’s bolt-action rifle handles the sizzling .30 caliber, which has a reputation for spectacular terminal performance and some attitude on the back end for its handlers.

Let me tell you how well the Barrett shot first, because at the end of the day that’s what matters most. In a word, wow. The .300 Winchester Magnum has long been a first-round draft pick for snipers and long-range shooters because of its inherent accuracy and problem-solving downrange energy, and Barrett did everything right to make sure operators blessed with using

a 98B Tactical got every ounce of potential the magnum has. Everything I fed the Barrett, which included selections from Nosler, Federal, Black Hills and Hornady, shot well under 1 MOA, with Nosler’s factory ammo edging out Black Hills for top honors with a five-shot group average hovering at about a half-inch at 100 yards. Here’s the kicker, the rifle shot these groups hot or cold, and opening up to 10-shot groups didn’t phase the gun or the shooter because the well-designed platform kept all of the .300 Winchester Magnum’s Type A personality downrange and not on my shoulder. The 98B Tactical is a big weapon, but it isn’t a clumsy tool for operators even remotely familiar with a bolt-action weapon.

The heart of the 98B, and really all Barrett rifles, is its robust build quality and functionality. When an operator is behind a 98B, he is in full control thanks to the confidence instilled by the well-sculpted pistol grip, fully adjustable trigger and intuitive safety, all designed for repeated engagements while never compromising the operator’s sight picture. The focus on ergonomics here cannot be overstated because crucial decisions are often made in the heat of the moment and the ability of a weapons platform to enhance its operator’s sound judgment and sure-handed choices can’t be compromised for budgets, ethics or a lack of training. Precision weapons demand equally precise optics, which can sit high or low on a rifle. Barrett engineers ensured form met function, giving the 98B platform an adjustable cheekpiece so operators can get a consistent cheekweld for repeatable long-range accuracy and a clear, comfortable sight picture during tense and often prolonged tactical situations regardless of optic height or operator build.

“The 98B Tactical is a serious weapon meant for sustainable long-range accuracy under the most stressful situations when lives might hinge on one well-placed shot.”

The 98B Tactical’s bolt handle is oversized for deliberate functionality with or without gloves and operates the bolt along a polymer guide like a hot knife through butter. Barrett engineering genius doesn’t stop there; the design team was thorough enough to create what I easily consider the smoothest, most reliably feeding detachable rifle magazine I have ever used. In fact, despite sub-MOA groups, stone-cold reliability and sure-footed handling, my absolute favorite aspect of the 98B Tactical was the magazine, which was easy to load and even easier to feed, remove and engage. After using it for more than a week, I wish Barrett would make magazines for everyone else, too. They’re that good at it.

The 98B Tactical has smooth, clean lines and just enough macho in its looks to intimidate softer threats. Just forward of the receiver, Barrett engineers had the forethought to enable operators to remove enough of the top rail to allow for stout optics with large front bells, which might not fit on other weapons designed to perform the same missions as a 98B might be tasked with. Details like that give operators the confidence that Barrett doesn’t just build an accurate rifle, but a usable, flexible tool that caters to the user and his need to vary his mission. Sure, operators can overcome large optics with higher scope mounting systems, but this dominos into poor ergonomics with higher cheek welds, the need for less or more eye relief and a myriad of other distractions that are all avoided by simply engineering a removable rail. It also tells me that Barrett sweats the small stuff, and the $4,199 investment is a wise choice.

Other key engineering features on the 98B Tactical include the fact that instead of rails, Barrett gave the handguard KeyMod mounting points along the bottom, right and left sides, with the full-length, 17-inch, 20-MOA-offset Picatinny rail on top offering lots of optical flexibility.

The barrel runs 24 inches long with a match chamber, a 1-in-10-inch twist rate and a very effective muzzle brake. The fact that Barrett sculpted this rifle to weigh about 11 pounds unloaded gives credit to its engineering efficiency.

On the range I used a Kahles K624i 6-24x56mm optic to make the test all about the rifle, and it was. The only thing crisper than the image from that Kahles was the trigger on the 98B Tactical. Kahles makes a fine tactical riflescope, and the robust 34mm-tubed optic locked in targets easily at ranges from 100 yards well out to 400 yards, The scope’s generous 3.5 inches of eye relief offered me plenty of flexibility while the first-focal-plane targeting reticle and elevation and windage adjustments gave me plenty of room to shoot the .300 Winchester Magnum as far and as precisely as I wanted.

Single-shot operations were smooth, reliable and repeatable, with all ammunition shooting accurately. Engaging multiple targets was simple and methodical, with a smooth bolt stroke, silky feeding from the magazine and the ergonomics of the controls—the safety, trigger and bolt handle—all making shots easier at 100-, 200- and 300-yard targets. The well-balanced rifle allowed me to fire, re-sight and fire without worrying about harsh recoil, muzzle jump or excessive movement in the prone and sitting positions. While the rifle is no lightweight based on today’s superlight standards, I felt I could carry it far enough and long enough to employ it for my needs, sporting or tactical, and not feel spent.

There are quality firearms, and then there are Barrett firearms. The Barrett 98B Tactical probably doesn’t compel a casual plinker to whip out his wallet. An MSRP of $4,199 sends a clear message that the 98B Tactical is a serious firearm meant for sustainable long-range accuracy under the most stressful situations when lives might hinge on one well-placed shot. Still, when a rifle has the reputation it can deliver each and every time, $4,199 seems like a bargain, whether you’re a casual shooter or the purchasing officer for your police department, government agency or private contractor. 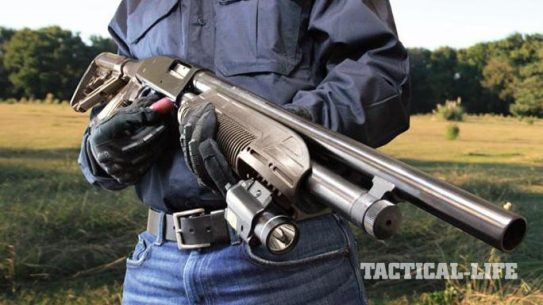 Adaptive Tactical's all new EX Performance Forend and M4-Style Stock is good for the...