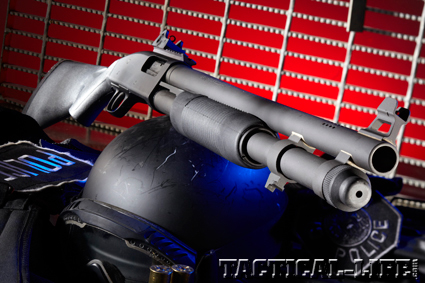 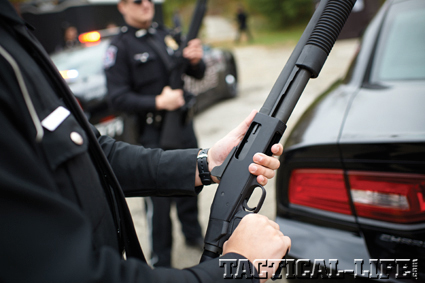 2 of 10
Moss-8
Mossberg offers several duty-ready variants of the 590A1, but each maintains the line’s reputation for reliability, close-range power and easy-to-use controls. 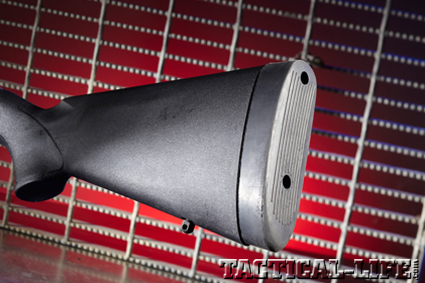 3 of 10
Moss-1
The author’s test 590A1 SPX arrived with a fixed, traditional-style, synthetic buttstock for absorbing some of the shotgun’s recoil. 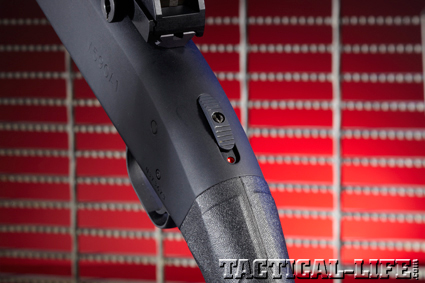 4 of 10
Moss-2
Mossberg equips the shotgun with a tang-mounted manual safety that is easy to reach. Its location also means it’s ambidextrous. 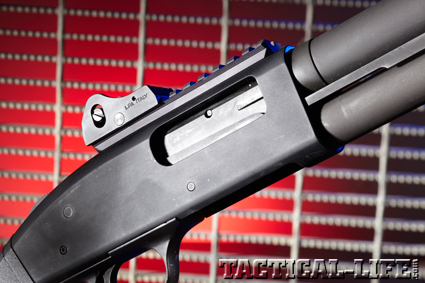 5 of 10
Moss-3
The 590A1 action can accomodate 3-inch shells, and the lightweight alloy, anodized receiver features a large ejection port on the right side. 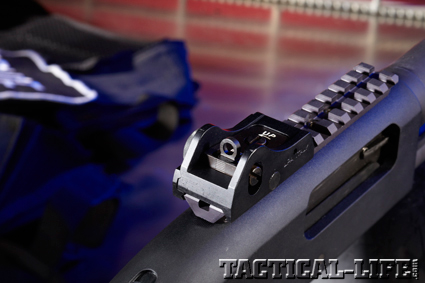 6 of 10
Moss-4
For fast targeting, an LPA ghost-ring rear sight is added to the SPX’s top Picatinny rail, pairing nicely with the contrasting fiber-optic front sight. 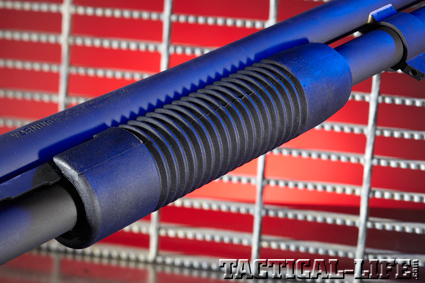 7 of 10
Moss-5
Attached to durable twin action bars, the 590A1’s forend is easy to reach and has grooves for greater control during manipulations. 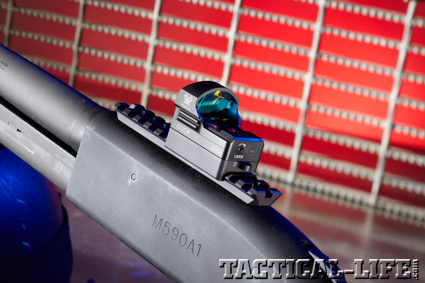 8 of 10
Moss-6
The SPX variant of the 590A1 features a Picatinny rail on top of the receiver for mounting optics like this Vortex Razor reflex sight. 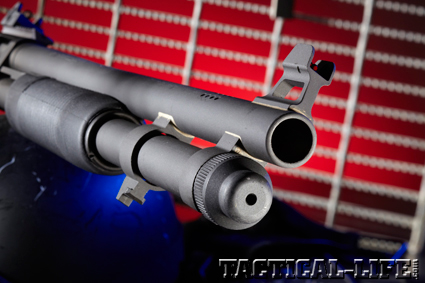 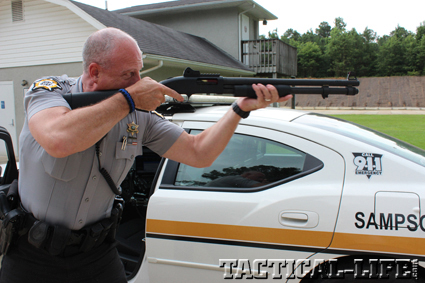 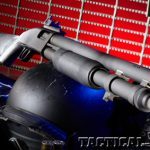 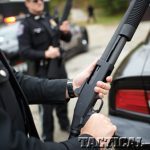 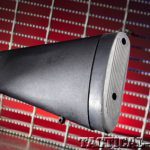 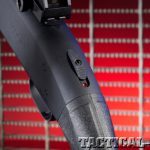 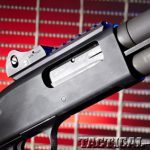 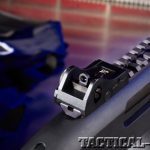 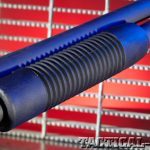 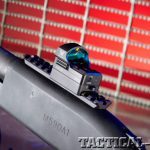 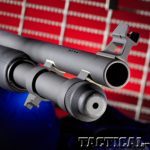 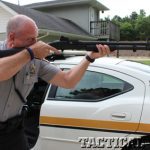 In the last few years, there has been a huge push toward M4-style carbines in the law enforcement community for use as patrol rifles. Now, that isn’t necessarily a bad thing; however, I for one firmly believe that the vast majority of agencies around the nation who are abandoning their “riot-type” shotguns in pursuit of the “perfect weapon”—which most believe a rifle to be—are perhaps underestimating the capabilities of the tried-and-true scattergun.

A pump-action shotgun has been the ubiquitous police long gun for as long as most of us have been alive—and for good reason. A well-placed 12-gauge shotgun slug is one of the most capable manstoppers around. In addition to that, due to new, proven wad designs, buckshot is now holding tighter patterns at a much greater distance,
thereby making it more effective as well. Shotguns are also much more versatile than rifles, as one can use a shotgun for applying less-lethal force and deploying distraction devices.

Regardless of how one feels about the rifle-versus-shotgun debate, few can argue the absolute benefit of a 12-gauge shotgun at conversation or vehicle stopping distances. Simply put, there is no better handheld fight-stopper out there, and I have had several personal encounters where the mere sound of a pump shotgun’s action stopped a potential threat before it occurred. With that established, let’s talk about the Mossberg 590A1 tactical pump shotgun.

The Mossberg 590A1 is a “shotgunner’s shotgun.” From its appearance to its performance, it is immediately apparent to any human being with a reasonable amount of intelligence that this is an all-business shotgun meant for hard duty use. I know most readers are probably thinking to themselves that there cannot be a whole lot new in the pump-action shotgun arena, but there are some very unique things about this 12-gauge shotgun that need to be addressed.

First and foremost is its durability. The Mossberg 590A1 has unstoppable reliability written all over it. I will not go so far as to say that I conducted a torture test while I had it in my possession, but I did do everything that I could (within reason) to cause it to fail, and it never once hiccupped. The shotgun’s standard features include a beautifully uniform Parkerized finish, which is perfect for a working shotgun, and a durable, cylinder-bore, 20-inch barrel. The SPX variant I received for testing featured an AR-style front sight with a fiber-optic insert for fast, accurate shooting; a rail-mounted rear LPA ghost-ring sight, quickly removable for mounting optics on the Picatinny rail; and a nine-round magazine tube. A shorter six-shot version of the 590A1 SPX is also available. Last but not least, the SPX comes with an Ontario M9 bayonet (and sheath) that quickly mounts on the under-barrel lug! The sample I received featured a traditional-style synthetic stock, although versions of the 590A1 with pistol grips and collapsible stocks are also available.

As with any Mossberg shotgun, operation of the 590A1 is simple and straightforward. A tang-mounted manual safety is located on the top rear of the receiver and is fully ambidextrous. The action release is located at the rear of the triggerguard. Loading is accomplished through an open port on the bottom of the alloy receiver, and a generously sized ejection port is located on the right side of the receiver. To utilize its lightweight alloy receiver, the Mossberg employs a steel-on-steel locking system in which the steel bolt assembly locks directly into a steel barrel extension. This method achieves both strength and light weight. The shotgun also has a 3-inch chamber, meaning it can accept any shell up to that length. This gives the gun a good amount of flexibility in loads that can be used.

I took the shotgun apart to check everything before shooting it. Sticking with my personal method of not cleaning, oiling or conducting any maintenance on guns that I test, I then took it to the range to run it through its paces. I have a container where I put loose shotgun shells after a box has been opened, and I grabbed a handful of shells from this box and started stuffing shells into the SPX.

I decided to start my testing on some steel targets from about 15 yards away, and after filling the magazine tube, I chambered the first shell and went to work. The Mossberg’s action was a little stiff at first, but it smoothed out with use. Due to the shotgun’s design and weight, it was comfortable to shoot, even when going from a light charge of birdshot to a full-power slug or buckshot load when shooting from the mixed bag of shells, and I never noticed that one shell was exponentially harder-hitting than another—with the exception of a couple 3-inch shells in the group.

Using a PACT shot timer, I fired a few shots from low ready to see how well the shotgun shouldered when time was of the essence and the buttstock had to be moved into the shoulder pocket without thinking about it beforehand. The gun shouldered well and was very consistent—the fiber-optic front sight came up to my line of sight each time as the buttstock hit my shoulder pocket.

When handling this shotgun, the user feels how well made the shotgun is, but not to the point where it needs to be handled with kid gloves. Intentionally moving the forearm back and forth as aggressively as I wanted, the gun still felt just as at-home as it did when working the action gently. That is the essence of a pump-action shotgun to me—the forearm is loose feeling and should be for reliability. After decades of being a devout duck hunter, it is for this reason that I continue to use a pump shotgun instead of anything else; they will take the abuse and keep on working when it matters, and the Mossberg 590A1 embodies that virtue.
I mounted a sling on the Mossberg and went to the 15- and 25-yard lines, respectively, with a few paper targets to see how well it would do when locked down in a good sitting position while using buckshot and slugs. No surprises here, either, as the SPX continued to impress the heck out of me, and shot cleanly and consistently with every type of shell. I also fired some of the newer Federal FliteControl buckshot to see how much of a difference there would be in shot patterns, and, of course, the pattern was considerably smaller with those shells. The old adage of “1 inch per yard” for buckshot rate of spread is no longer applicable when using this type of shotshell.

The average rate of spread with ordinary buckshot was 9 inches for any of the commonly available LE loads from Winchester, Federal and Remington, which is still well above average. However, when using the Federal FliteControl ammo, the average pattern measured less than 4 inches! At 15 yards, that is an amazingly tight pattern. I then moved back to 25 yards and tested some of Federal’s 1-ounce tactical slugs, and the best five-shot group measured 3.25 inches.

I assisted with a SWAT training course while I had this shotgun in my possession, so I took it with me and asked a few of the veteran operators there to try it out and give me their opinion on the Mossberg 590A1 SPX I was testing. All of the operators who tried this shotgun loved how it handled and performed, and one of them attempted to buy it from me on the spot! With no exceptions, every person I asked who had tried the Mossberg stated that they would gladly use it as a patrol or SWAT shotgun and would know that they were well equipped with it, including smaller-statured officers who liked the 13.88-inch length of pull.

After shooting the Mossberg SPX, I took it apart to see if there were any signs of unusual wear or anything amiss on the inside. I found every part of the shotgun to be in great shape, and I really couldn’t tell that it had fired as many rounds as it did in a short amount of time. This is due to the shotgun’s construction and design, and it seems close to indestructible. For my friends who are current and retired U.S. Marines, it is obvious to me why the USMC adopted this shotgun for combat use. If the U.S. Marines have a hard time breaking these shotguns, that is a great endorsement in my opinion.

If you’re in the market for a great-shooting, dependable patrol shotgun that isn’t going to force you to take out a loan, give the Mossberg 590A1 series a try. You won’t be disappointed. For more information, visit mossberg.com or call 800-363-3555. 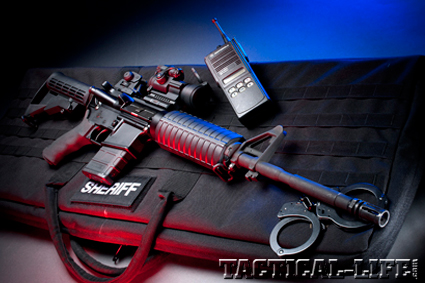