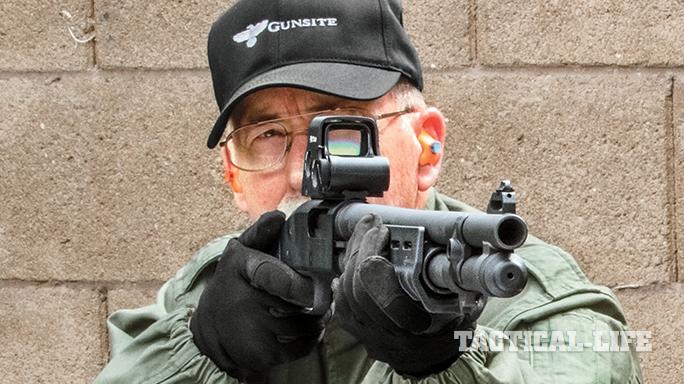 1 of 5
Gun Review: Mossberg 590A1 Magpul Shotgun
The Magpul SGA stock’s buttpad helped absorb some of the shotgun’s 12 gauge recoil, making the 590A1 comfortable to shoot on the range. 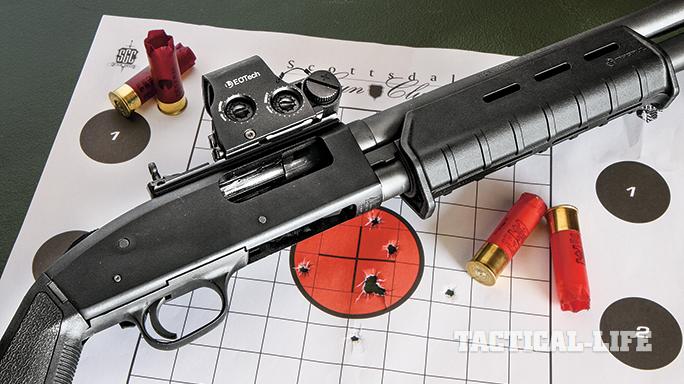 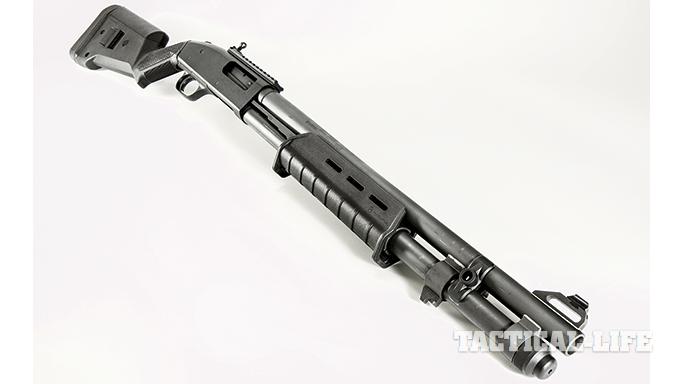 3 of 5
Gun Review: Mossberg 590A1 Magpul Shotgun
The 590A1 pump action has proven its worth on the battlefield, and now Mossberg has developed it further with several tank-tough Magpul enhancements. 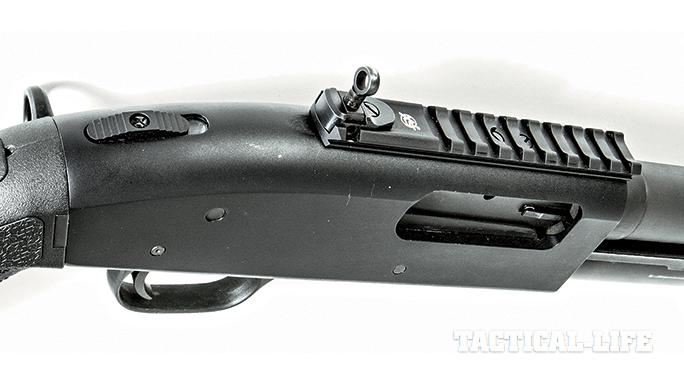 4 of 5
Gun Review: Mossberg 590A1 Magpul Shotgun
The Mossberg 590A1 features a tang-mounted safety and loads from the bottom, making it easy to use for both right- and left-handed officers. 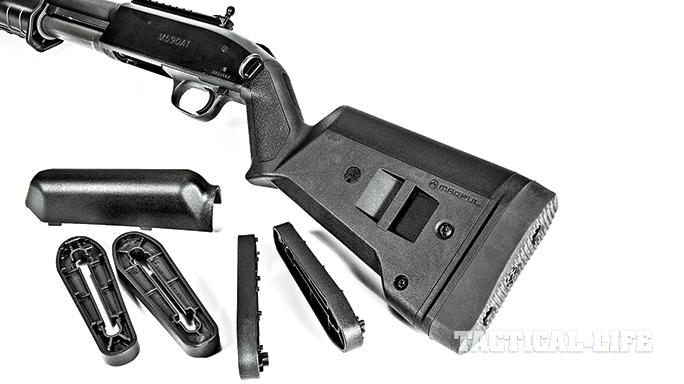 5 of 5
Gun Review: Mossberg 590A1 Magpul Shotgun
The 590A1 pump action has proven its worth on the battlefield, and now Mossberg has developed it further with several tank-tough Magpul enhancements. 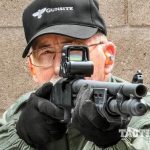 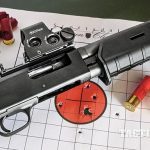 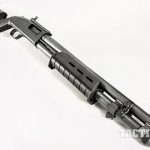 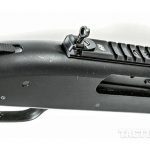 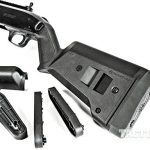 Shotguns have been used for defending countries on battlefields, protecting households from intruders and enforcing the law for a very long time.

And when a shotgun is mentioned to someone who grew up watching Westerns on television in the 1950s, images of a dusty stagecoach guard or a local sheriff facing down a lynch mob, both cradling a double barreled shotgun, often come to mind. While many Hollywood depictions are fantasy, the fact remains that the fighting shotgun is a formidable weapon and was frequently found in the hands of a lawman. Now, even though many law enforcement agencies are moving towards the patrol carbine, a pump-action shotgun still remains a common choice.

It’s a versatile weapon system and can employ a number of shot and slug loads, making it effective at short and intermediate ranges. Buckshot loads have a devastating effect at closer range, inflicting several wound channels with the firing of a single shell, and in the right hands, slugs can be effective to 100 yards and more.

A good example of the fighting shotgun is the Mossberg 590A1. Built for military use, it has been proven in battle, and the versions available commercially and to law enforcement are built to the same standards. But now Mossberg has enhanced the 590A1 with a number of Magpul parts to make a good gun that much better.

Recently, a group of seasoned gun writers joined Mossberg in Arizona at Gunsite Academy, the well-known and respected firearms training facility that instructs law enforcement, military and law-abiding private citizens of good character. We were there to test and evaluate the new Mossberg 590A1 Magpul shotgun, and for two days the guns were subjected to hard use in training scenarios designed to simulate real-world use in self-defense situations. Ammunition was supplied by Winchester, and the guns handled birdshot, 00 buckshot and slugs equally well at ranges from a few yards to 50 and beyond.

The Mossberg 590A1 Magpul is a 12 gauge shotgun with a 3-inch chamber. It’s made for tough conditions and has a 20-inch barrel with heavy walls and a cylinder bore, meaning there is no choke or constriction near the muzzle. It’s a fighting shotgun, not a hunting gun, and a choke is not usually found on such guns. The barrel and magazine are Parkerized for durability and rust resistance, while the aluminum alloy receiver is black anodized with a flat, satin finish that contrasts nicely with the barrel.

The standard cleaned out mag tube holds eight 2¾-inch shells. With one in the chamber ready to touch off, that’s nine rounds of pretty impressive firepower on board. If one chooses to use 3-inch shells, the capacity drops by one round. Either way, for the officer facing multiple assailants, it’s comforting to have more ammo.

In addition to the basic features of the 590A1, and testifying to its military heritage, the Magpul version retains the bayonet lug at the bottom of the barrel bracket that secures the barrel and magazine tube. And clamped to the barrel and tube is a Magpul Forward Sling Mount that can be installed on either side of the gun.

Just aft of the sling mount is a Magpul MOE forend that is heavily ribbed for a good grip and features hand stops at the front and rear. Slots along the sides of the forend allow for the attachment of a full range of Magpul rails, mounts and accessories. For the Gunsite trials, a rail was installed and we mounted a SureFire M600 Ultra Scout light, which throws 500 lumens of white light—another essential for a defensive shotgun, since most life-threatening encounters occur in diminished light, and you must be able to identify your target before deciding to fire.

The 590A1 features dual action bars to assure smooth, bind-free operation, and despite hard use in tactical drills with the action repeatedly and forcefully slammed open and shut, I experienced no feeding problems. The gun has dual extractors that worked every time regardless of the loads fired. Spent shells were smartly tossed out of the ejection port without incident, and loading the magazine was very smooth.

The 590A1 trigger broke positively at about 7.5 pounds, but with a tactical shotgun, a light trigger is generally not needed. Mossberg shotguns are equipped with safeties on top of the receiver at the rear, making them easily operated by either left- or right-handed shooters. Just slide the selector forward to fire and rearward to engage the safety. The 590A1’s action lock lever, used to cycle the action if the gun is cocked and the action closed, is located to the rear of the triggerguard on the right side of the receiver. That’s a great location because it allows the shooter to activate it with the middle finger of the firing hand without having to change his or her grip or move the trigger finger from its safe position alongside the receiver.

The 590A1 Magpul comes with either an XS Sight Systems Ghost Ring rear sight and blade front sight with a vertical white stripe—like the shotguns we used in the Gunsite test—or a bead front sight. Given a choice, a ghost ring sight is probably a better choice for a fighting shotgun because it is very fast to get on target yet can be used for shooting at longer ranges with slugs. The ghost ring was attached to an XS Sight Systems Picatinny rail mounted on top of the drilled and tapped receiver. The rail also makes it possible to mount an optic like the EOTech XPS2 holographic weapon sight, which was supplied for the Gunsite trials. That sight features a reticle with a 1-MOA red dot surrounded by a 65-MOA red circle that is amazingly fast for tactical use yet can be used where a more deliberate aim is needed.

The Mossberg 590A1 Magpul shotgun is also equipped with a Magpul SGA Receiver Sling Mount that can be attached on either side. For testing at Gunsite, Blue Force Gear supplied its Vickers Sling, which proved to be a good choice because of its durability and ease of use. A sling on a fighting shotgun is just as essential as a holster for a handgun, because putting the gun down—which means disarming—when you need both hands free is not an option.

Instead of a standard buttstock, Mossberg has installed a Magpul SGA stock that is made of polymer with a grip-enhancing texture and a very effective recoil-absorbing buttpad. Even when shooting high-velocity loads, recoil was not uncomfortable. The buttstock also has sling attachment points on either side and comes with two interchangeable combs—one is straight and the other is about a quarter-inch higher for use with optics. And the 590A1 buttstock is supplied with four removable spacers that can be used to adjust the length of pull by 2 inches. Just remove a screw, pull the buttpad off, remove or insert spacers and reinstall the screw. It’s very fast and simple to do.

At Gunsite, we had the opportunity to shoot multiple targets, both paper and steel, on square ranges at various distances, which allowed us to methodically test the guns using different loads. As with any shotgun, shot patterns will vary depending on the load used, but all guns delivered acceptable patterns at the distances commonly associated with shotgun defensive use. We also tested the guns in simulated self-defense conditions where multiple targets were engaged as the shooter moved from firing point to firing point. Lastly, we used the guns indoors while simulating the clearing of a building that was infested with bad guys. All this was done under the supervision of Gunsite instructors who do an excellent job of teaching.

The tactical shotgun is an extremely versatile and effective self-defense weapon that can be used with birdshot, buckshot or slugs. As in the past, a quality shotgun like the Mossberg 590A1 Magpul, with the right training and ammunition, can be a formidable self-defense gun and continues to be used by law enforcement agencies everywhere. 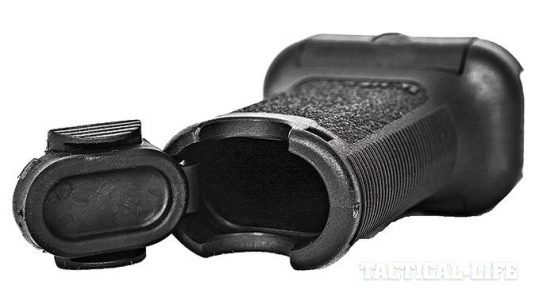 Bravo Company Manufacturing adds to its already impressive Gunfighter line with the all new...