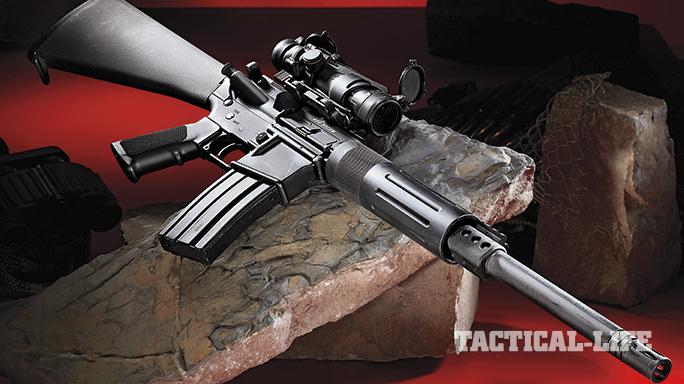 1 of 6
Gun Test: Rock River Arms LAR-458
Rock River Arms’ LAR-458 Mid A4, with its 16-inch bull barrel, fires the powerful .458 SOCOM without being much larger than a standard 5.56mm AR-style rifle. Shown with a Trijicon ACOG sight. 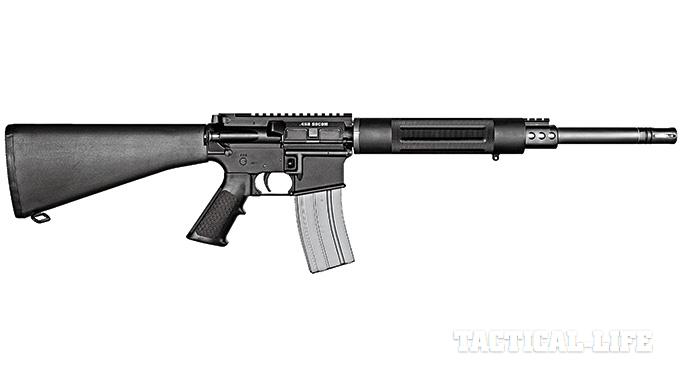 2 of 6
Gun Test: Rock River Arms LAR-458
The LAR-458 CAR A4 comes ready for optics with a flattop upper receiver and a railed, low-profile gas block. 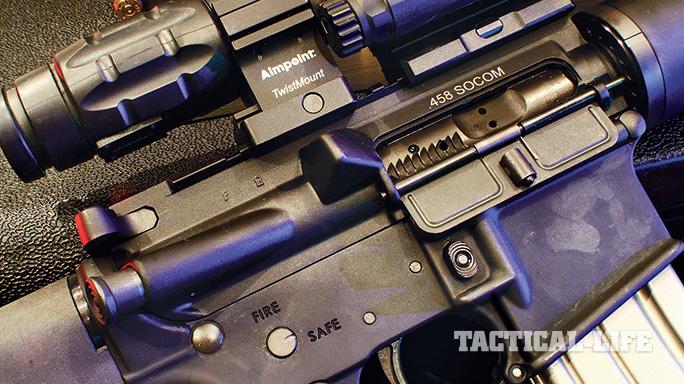 3 of 6
Gun Test: Rock River Arms LAR-458
The LAR-458’s receviers may look like a standard AR-15’s, but note the enlarged ejection port and roll markings. 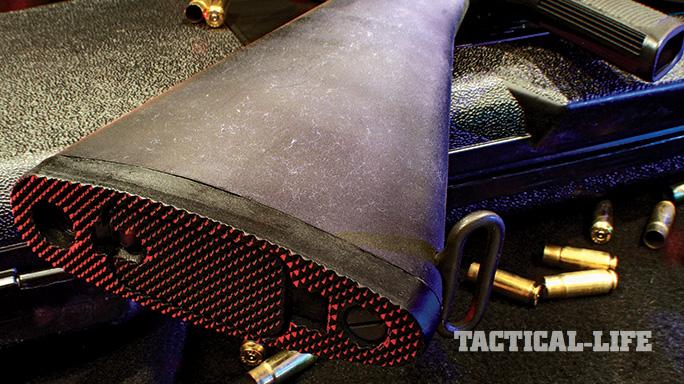 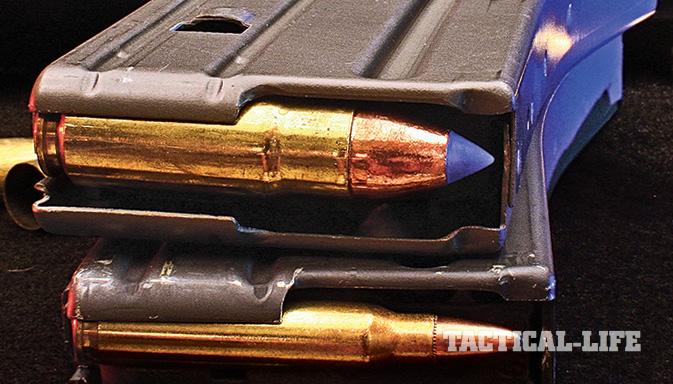 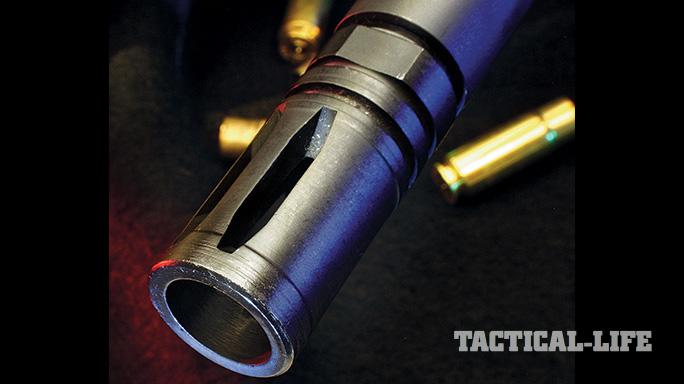 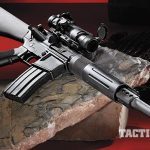 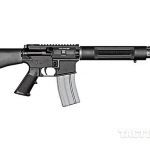 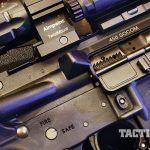 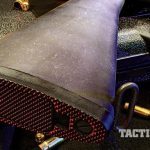 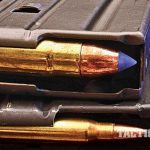 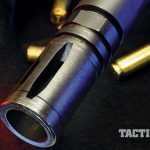 A few years ago, I was chatting with a good friend, Mike, who was a distributor in the Southwest for Rock River Arms, about the fact that I was interested in an AR rifle with plenty of penetration and stopping power on tap.

Of course, what makes for good “stopping power” often becomes less science than voodoo in many debates heard around the gun shop, but most would agree that high-energy rounds with deep penetration capabilities are desired.

As we discussed the topic, I mentioned a .50-caliber rifle in which I’d taken a keen interest, but alas, after I’d reviewed the gun and all was said and done, a deal for purchase of the weapon that was agreeable to my terms hadn’t materialized; it was just the way that things worked out. Mike then suggested I take a look at the .458 SOCOM offered by Illinois manufacturer Rock River Arms (RRA), as he felt the round was quite suitable for my needs. He mentioned that the .458 uppers were top sellers for his outfit, and he sold “a ton of them.” I had positive interactions with RRA in the past, writing up both 1911 pistols and LAR rifles alike, and found them to be well made, so testing the LAR-458 CAR A4 rifle seemed a perfect proposition.

The .458 SOCOM had its genesis in casual discussions among special operations troops about the relatively dismal performance of 5.56mm NATO rounds from M4s and M16s during Operation Gothic Serpent in Mogadishu.

In 2000, Marty Ter Weeme of Teppo Jutsu contacted Tony Rumore of Tromix in Broken Arrow, Oklahoma, and the two discussed the possibility of the conceptual big bore round and an AR delivery platform. Early conversations started with a load based on a stretched .50 AE case, and a case with a .308 head was finally settled upon, resulting in the .458 SOCOM. Starline was going to make the brass, and Ter Weeme reached out to Dave Davison at CH4D to make the dies and David Manson at Manson Reamers for the chamber reamer.

On Feb. 16, 2001, Rumore began work on the upper receiver, and, working into the early evening, finished at around 8:00pm. He test-fired the first gun in his shop that night, and it functioned perfectly.

The prototype was sent to Ter Weeme for testing, and Tony made a couple more to run himself. Tromix began offering rifles, uppers and ammo in April of 2001. When Rumore contacted Peter Pi at CorBon, he didn’t hesitate and agreed to come on board in commercially manufacturing the ammo.

The guns sold slowly, and Rumore eventually abandoned the project. Today, only a handful of manufacturers build .458 SOCOM rifles, including Teppo Jutsu, SSK Industries, Castle Arms and, of course, Rock River Arms, all licensing the design from Ter Weeme.

The LAR-458 MID A4’s most prominent and unique feature is its larger-diameter, 16-inch, 416R chrome-moly, bull barrel. These barrels are Wilson air-gauged units button-broached with eight lands and grooves in a 1-in-14-inch twist rate. The crown is recessed and cut at 11 degrees, and an A2 birdcage-style flash suppressor is attached. The gas block is RRA’s 6061 aluminum Varmint unit with an integral sight rail and a smooth bottom. Three large holes cut into both sides of the gas block appear to be there to lighten the unit. Just behind the gas block is the handguard, a mid-length, fluted and knurled, free-floating aluminum tube. There is a stud under the handguard for the attachment of a sling swivel or bipod.

The charging handle looks like that of a standard AR-15 and operates the same. Removing the bolt (Carpenter 158 steel) and its carrier (8620 steel) reveals components that look just like the smaller LAR-15’s. The rifle’s mid-length gas system reduces the amount of wear and tear on the gun, and it runs cooler than a carbine-length system.

The upper and lower receivers are CNC-machined from aircraft-grade 7075-T6 aluminum forgings, the former being an A4 configuration with a flattop Picatinny rail. The controls are standard AR-15 fare, beyond an indicator notch visible on the right side of the selector lever and the “.458 SOCOM” markings above the ejection port with dust cover. The RRA logo and the roll marks, “Colona, IL, LAR-458″ are pressed into the left side of the magazine well, along with the serial number just below. The upper and lower receivers are secured by captured crosspins, and there was no play between the two halves of my test sample whatsoever.

The buttstock is a standard, solid, high-impact composite, A2-style unit with a trapdoor in the butt itself capable of containing a cleaning kit or other small items. The buttstock also houses the buffer and spring. The pistol grip is mil-spec LAR-15 fare. The LAR-458 is also set up with a two-stage trigger.

The LAR-458’s fit and finish were outstanding. The aluminum components are hardcoat anodized black, while the barrel is matte black. The machine work was exceptional with clean, straight cuts and an absence of machine marks—even inside the
receivers. Lastly, RRA ships the LAR-458 in a hard case with one mag.

To index my fire, I mounted an Aimpoint CompM4 reflex sight coupled with a 3x magnifier onto the LAR-458. I also set up a police silhouette, which I used to dial in the dope on the Aimpoint sight before aiming in on the bullseyes.

My initial range test was cut short just as I dialed the rifle in at 100 yards; one of the casings broke, lodging partway in the chamber. All of my efforts to remove it were futile, so I had to ship the upper back to RRA for removal. (It’s not like I had a .458 SOCOM broken shell extractor lying around.) Once I got the upper back, I headed back to the range to test the .458 SOCOM’s inherent accuracy. Posting bullseye targets at 100 yards, I benchrested the LAR-458 atop a sandbag and began touching off five-round groups.

Initially, I experienced a plague of malfunctions. I gave Rock River Arms’ Steve Mayer a shout, and he recommended I try another magazine. I had mistakenly thought that RRA was modifying AR-15 magazines and was amazed to find that the company actually uses standard 5.56mm magazines. I went to my car and took a standard aluminum 30-round magazine out of the trunk (polymer magazines are not recommended due to swelling) and went back to work. The gun ran 100 percent for the rest of the day during my tests. The supplied magazine is a 30-round 5.56mm model, which translates to a single stack of 10 .458 SOCOM cartridges. Twenty-round 5.56mm magazines may be used, but some may require slight modification to the front of the magazine.

In fact, I was further amazed to learn that, other than a few small tweaks here and there, this gun is all standard LAR-15 with the exception of the aforementioned barrel, proprietary barrel extension, bolt and extractor, and the fact that the ejection port is opened up a bit.

CorBon’s 300-grain Self-Defense JHP ammo made the best showing of the day in the accuracy department, wrangling five rounds into just 0.94 inches center to center. This was followed close behind by CorBon’s 300-grain T-DPX ammo at an inch even. SBR’s 300-grain TTSXs and 350-grain JSPs went into 1.75 and 2 inches, respectively.

The most notable and immediate shooting characteristic of this weapon distinguishing it from all of RRA’s other LAR-15-platform rifles and carbines is its tremendous recoil—recoil that can only be described as punishing from a bench-rested position. From standing, it’s significantly more comfortable to shoot.

All of the controls are in the normal location for those familiar with M16s and AR-15-type rifles; there is no learning curve there. Accordingly, the ergonomics associated with the black rifle are also present, and it has the expected favorable shouldering and handling characteristics. The trigger is as advertised, a two-stage unit with about 0.18 inches of take-up before resistance is felt, then a crisp break at 4.5 pounds.

As stated before, the fit of this weapon is extremely tight; field-stripping would be identical to a standard LAR rifle, except that in the case of my sample, the crosspins were so tightly fitted that I found myself using a nylon punch to drift them out of the receivers. It’s possible they would “wear in” some with repeated disassembly, but I only field-stripped the gun a couple of times during my tests.

RRA doesn’t really address what its targeted niche was for this gun. My first thought is that the LAR-458 would be desirable for hunters for its energy, penetration, large wound channel and stabile bullet trajectory through heavy brush. For a number of the same reasons, some might want the gun as an entry weapon or for certain military applications. I think the LAR-458 acquits itself well in delivering this performance. The fact that they will accept standard 30-round AR-15 magazines means that availability is in the millions—no expensive or limited numbers of proprietary mags, as is the case with a lot of less-than-mainstream calibers. Not even a small modification is necessary. Accuracy and reliability were also on tap provided the proper equipment was used. One could also carry an LAR-15 and then quickly switch to the heavy-hitter by simply attaching the .458 SOCOM upper.

At a couple hundred dollars more than the average black rifle, the LAR-458’s quality construction and tight tolerances, coupled with its impressive power and performance, make the price tag well worth your while.

The all new AccuPower LED Riflescope series from Trijicon will feature offerings of 1-4x24,...