Various factors have combined to generate interest in Springfield Armory’s precision M1A rifles. Certainly the current use of the M14 by military personnel and the M21 by military designated marksmen has reinforced the usefulness of an accurate, self-loading .308 rifle. Analysis of the Beslan School Incident, which shows the importance of the capability  to fire multiple, quick follow-up shots, has also influenced some law enforcement agencies to adopt an accurate M1A variation. 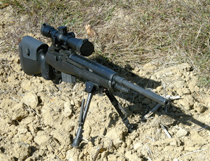 A very substantial number of civilian shooters like the M21 or other very accurate M1As as well. For all of these groups that like precision M1A rifles, Springfield Armory offers their ultimate variant, the M25 Whitefeather, which is intended to honor legendary USMC sniper Carlos Hathcock. Note that each of these rifles is engraved with the Whitefeather logo and a facsimile of Hathcock’s signature.

The origins of the M25 can be traced to the 10th Special Forces Group (Airborne) who wanted a sniper rifle built on a match-grade M14. The rifle was intended for the Special Forces and SEALs, and was designated the “Light Sniper Rifle” by SOCOM.

Reportedly, it was also designated the “Sniper Security System.” The M25 as developed for SOCOM units incorporated a National Match M14 glass bedded in a McMillan fiberglass stock along with a special gas piston, a National Match spring guide, and a Brookfield Precision Tool Advanced Scope Mounting System. Scopes were normally from either Bausch & Lomb or Leupold. Initially, it was designated the XM25 to mark it as a prototype, but once adopted it was designated he M25.

Gun Details
The Springfield Armory M25 is built as a custom rifle. Features include a receiver with a rear lug designed to join with a bolt in the stock to securely lock the action and stock together. The stock is a McMillan M3A, which allows adjustment for LOP (length-of-pull) via the use of spacers and for cheek rest position via a knob, which may be loosened to raise or lower the cheek piece. A Krieger heavy carbon steel match barrel of 22 inches with 1-in-10-inch twist is standard for the M25, though a stainless steel Krieger match barrel is available as well.

The relatively long muzzle brake/stabilizer is well designed to channel gases upwards so that dirt is not thrown up when shooting prone. One real aid to precision shooting is the two-stage match trigger, which comes from the factory set around 2.5 to 3 pounds, but it may be adjusted between 1.5 and 4.75 pounds. Other aids to accuracy include a welded, custom match gas system, a lapped and fitted bolt, pillar glass bedding, and a custom match op rod spring guide.

The Precision Reflex rigid MIL-STD-1913 (Picatinny) rail is incorporated for ease of mounting a scope. As a result, the M25 does not have any iron sights. Because the Precision Reflex rail is relatively short, that does not leave room for any type of flip-up sights. This would only be an issue if the M25 scope were damaged in a tactical situation. The inclusion of a Harris bipod makes prone shooting and shooting from a table or other rest much easier, especially considering the M25’s weight. The M25 is guaranteed to shoot 1/2-MOA (minute of angle) at 100 yards when it leaves the factory. That’s very accurate for any rifle but especially for a self-loading one.

Although the M25 comes with a 10-round magazine, the rifle will also take 20-round M-14 magazines. When shooting prone or from a rest, the 10-round magazine is generally more desirable. Speaking of magazines, in typical M14/M1A fashion, the magazine has to be rocked into place in the magazine well. The magazine release is the standard small paddle/lever in front of the triggerguard. The safety is also of M14/M1A type and protrudes back into the triggerguard when on safe.

The M25 is a big, heavy rifle. The Krieger match barrel is 22 inches in length. Overall length of the M25 is 46 inches and weight is 12.7 pounds without the scope. With scope and rings, the M25 package will approach 15 pounds.

Scope Selection
When I was choosing a scope for the M25, I decided to test Leupold’s LR/T 3.5-10x40mm Front Focal. Although I have shot rifles with front focal scopes mounted, I thought using one with the M25 would allow me to gain more familiarity. My experience with Leupold tactical scopes has always been positive so I felt a Leupold front focal was especially interesting.

Many tactical marksmen like this system since the reticle will appear finer at longer range and allow precise placement of the crosshair. Many also feel that the rear focal allows the reticle to be seen better in low light or when shooting at a target in heavy cover/concealment. On the other hand, front focal reticles have some real advantages in ranging. No matter what magnification is used, the spacing of the Mil Dots or other reticle features remains consistent.

Since many tactical marksmen use laser range finders these days and use their Mil-Dots or other range estimation systems as a backup, each shooter will have to weigh the value of the front focal’s ranging ability. I also find the front focal has an advantage for me since my vision has gotten worse as I’ve gotten older, which sometimes makes it difficult for me to acquire a fine crosshair against a dark target at longer ranges.

Since the crosshair is not as fine on higher magnification with the front focal, this is less of a problem. Normally, I like Leupold scopes with illuminated reticles, which is a feature not available on front focal scopes. This will be a consideration for some shooters.

The matte black LR/T weighs 19.5 ounces and is 13.5 inches in overall length. Because the M25 is a big, heavy rifle, I wanted to keep scope size and weight to a minimum while still being able to maximize the .308 round. The LR/T front focal offers an elevation range of 65-MOA and a windage range of 65-MOA. I will note that I tried a couple of other scopes on the M25 during testing before deciding on the Leupold and found with all of them including the front focal LR/T that I needed all of the elevation MOA adjustment available to get the scope zeroed with the M25. I like Leupold’s QRW (Quick Release Weaver-style) and used those with the M25.

Range Time
Before starting to shoot the M25, I removed a couple of spacers to change the length of the stock so it fit me better. I also adjusted the cheek rest for comfort. As a result, the rifle was comfortable for me when I got behind it to shoot. I sighted the M25 at 200 yards. The interesting thing I found when doing the initial shooting to get the scope on at 200 yards was that the trigger pull was so light that I had a tendency to jerk at least one round in each group. After firing a few rounds, however, I got used to the trigger and got groups, which were good enough to get the scoped adjusted to point-of-aim (POA). I used Federal 168-grain Match ammo and Black Hills 168-grain Match, both excellent loads.

I fired most groups either from a seated rest or prone. I wish that I could say that I managed to maximize the M25 and shoot 1/2-MOA groups, but I didn’t. My best five-shot group at 200 yards was 1.75 inches, which is certainly good for most rifles. At 100 yards I managed a three-shot group of

0.75 of an inch. I found that the combo of the light trigger pull and the self-loading operation, which did not necessitate using my right hand to operate the bolt were both aids to accuracy. I wanted to use the front focal feature a bit more so I did some shooting at 300 yards on plates and found the larger crosshairs a real boon to my aging eyes.

I decided to try some 100-yard shots off-hand, but the combined weight of the M25 and scope was enough that I could not hold the rifle steady enough to score hits on a hanging plate at 100 yards. I know there are shooters who are capable of shooting the M25 offhand, but despite weighing over 200 pounds and having worked out my entire life with free weights or weight machines I’m not one of them. For most shooters, I would say expect to use this rifle from some type of rest.

I didn’t mount a sling on the M25. However, I would recommend that a tactical marksman planning to use the M25 should do so as the rifle will be quite unwieldy if it is necessary to climb to get into shooting position or even if one has to crawl or otherwise move some distance. If the shooter knows how to “lock in” with a sling it will aid in off-hand shooting as well.

I didn’t manage to maximize the accuracy of the M25, but I blame that on myself instead of the rifle. Springfield Armory produces very high quality rifles and if they say it will shoot ½-MOA I’m sure it will in other hands than mine. I do think the M25 is an extremely high quality rifle. I also found the front focal LR/T of Leupold’s usual high quality. Since I was shooting a known distances, I didn’t really evaluate the advantages for range finding, though I did try placing the Mil-Dots over a few features on the range and did see how much faster I would be able to determine range.

As already stated, for me the major advantage was the larger crosshairs at distance. I shot one group on a pictorial “terrorist” target and found that I could place the crosshair on the nose for an immediate kill shot quite easily with the larger reticle. Nevertheless, for taking very precise shots at longer range, some will likely find the thicker lines of the reticle a disadvantage. I would recommend that anyone considering a front focal scope should find a large gun shop which stocks the Leupold LR/T front focal and try looking through it. I think some of you will find it exactly what they want.

Final Notes
As good as the M25 is, two factors were factors for me. The weight is an issue, though it certainly gives the rifle stability once it is in shooting position. Therefore, one has to consider the tradeoff involved in its weight. Second, because the M25 is virtually a custom-built rifle, and cost is quite high.

For many agencies this will be substantially more than they want to invest in a tactical rifle. But the bottom line is the M25 is a high quality rifle and quality costs. I would also say that to justify purchasing the M25, one must be a good enough shooter to really take advantage of its accuracy.