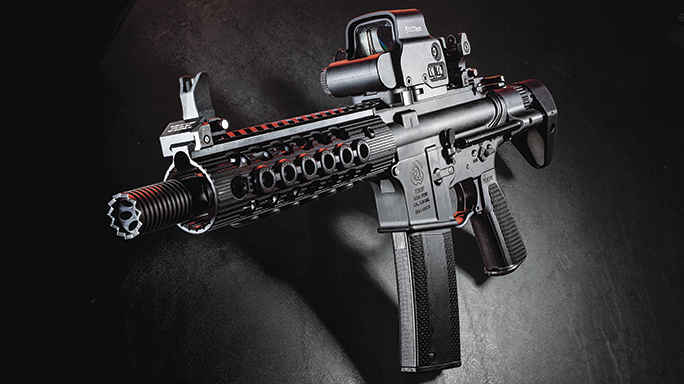 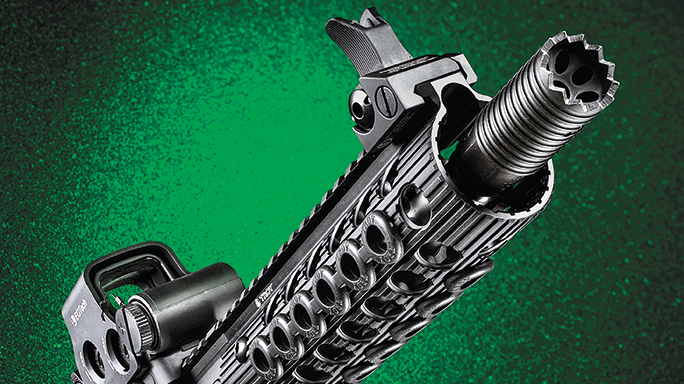 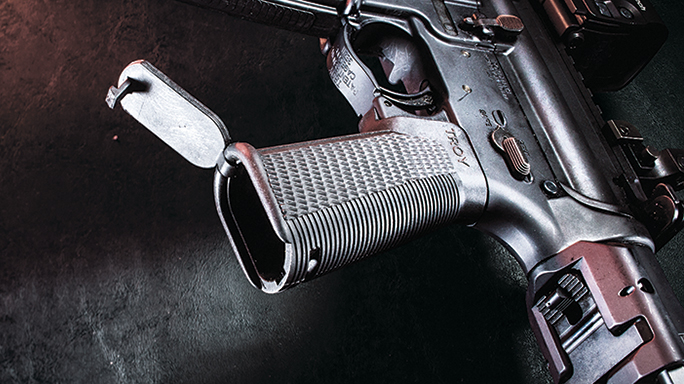 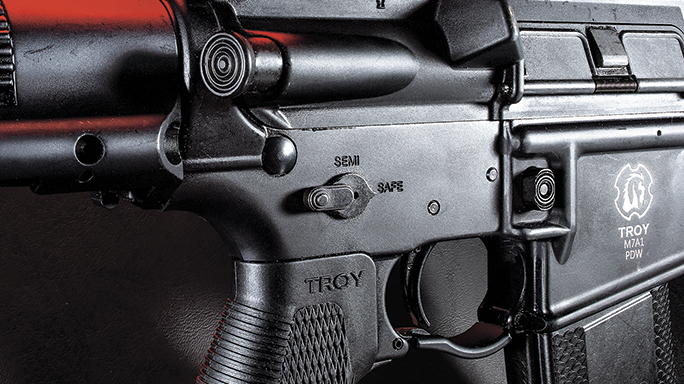 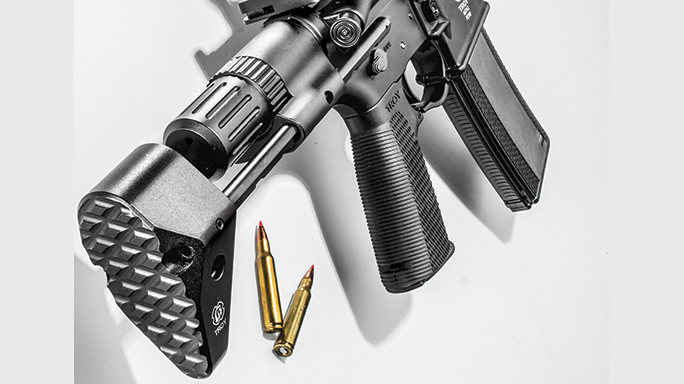 5 of 6
Gun Test: Troy’s M7A1 PDW in 5.56mm
Troy’s M7A1 PDW uses an innovative buffer/bolt carrier system and a collapsible stock that rides on rails running alongside the receiver on both sides. 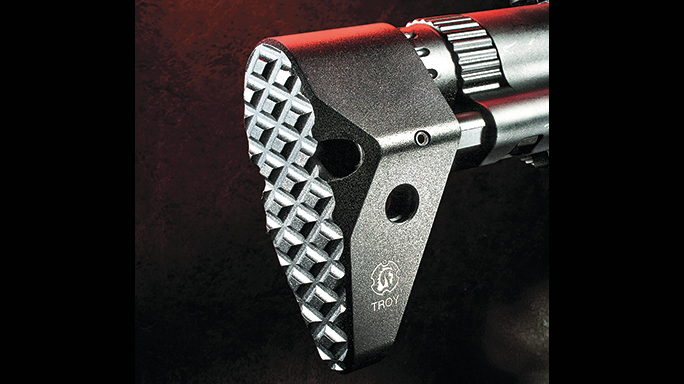 6 of 6
Gun Test: Troy’s M7A1 PDW in 5.56mm
The buttplate is aggressively textured to ensure the stock locks solidly against a shooter’s shoulder. 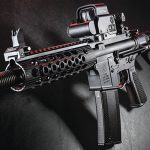 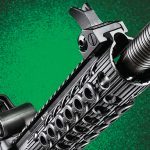 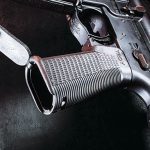 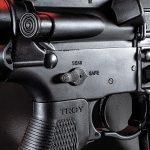 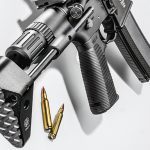 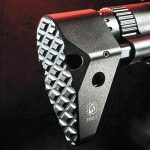 Compact weapons continue to come into their own. Designs are being pushed further and further, bringing us smaller weapons that yield excellent accuracy and provide excellent reliability. There’s always been discussion about the AR in short form and whether or not it’s reliable, accurate or truly effective. It’s pretty safe to say that we can move past trivial discussions of those sorts.

Many companies have made shorter weapons by simply putting a shorter barrel and gas system on a receiver, which is relatively simple. Troy did the same with its first version of the M7A1 roughly four years ago. It was a small package that came with a Storm case so that you could break it down for transport. However, Troy didn’t just settle for that and instead pushed to take the M7A1 to a new yet smaller level by creating a viable extendable/retractable stock for the AR’s lower receiver.

A typical review of a weapon might start with highlighting the barrel. While that is obviously extremely important, the most innovative and notable feature on the M7A1 is without a doubt the stock. Functionality aside, extendable/retractable stocks such as this definitely look awesome but historically only appeared on ultra- compact weapons like the HK MP5. The challenge with having such a stock on an AR has always been the buffer tube system and how to shorten it correctly without interfering with its function. Troy addressed this by creating a proprietary bolt carrier that has a buffer attached at the rear of the carrier as well as a redesigned spring.

The retractable stock is made of aluminum and is quite sturdy. It’s a complete system that replaces the entire standard buffer tube assembly. The mil-spec bolt carrier and buffer are actually one piece and allow the proper amount of travel for reliable function. Being a Troy product, it’s sturdy as well. The stock slides on two aluminum rails that run along both sides of the lower receiver when collapsed. With the stock collapsed, the rails don’t interfere with the ambidextrous safety’s operation—for the most part. It’s a bit awkward operating the safety lever with the stock collapsed simply because the amount of space above the lever is decreased slightly. A little practice operating the safety is necessary to get fully acclimated to it.

The addition of this PDW stock creates a very compact package. Troy’s literature points out that the PDW stock is 3 inches shorter than the traditional carbine stock. This statement doesn’t do it justice. The M7A1 PDW stock offers six length-of-pull positions and shrinks the gun down to an even 21 inches when collapsed. Compact dimensions like these make for a weapon that is easy to maneuver in and out of vehicles and keep things closer during CQB work. The stock is easily adjusted by pushing a latch that resides on its underside just behind the rear of the receiver. Operating the latch is simple and straightforward. Press the latch once to move the stock in either direction, with it locking into each adjustment point. If you hold the lever down, you can completely extend or collapse the stock in one motion.

The M7A1 is Troy from muzzle to buttstock. The forged upper and lower are mated together and support a 7.5-inch, stainless steel barrel with a 1-in-7-inch twist rate. Short barrels mean big noise and blast, and Troy equips the M7A1 with its Claymore muzzle brake. The Claymore is designed to direct muzzle blast forward and away from the shooter while also helping to reduce muzzle rise like a typical brake. The Claymore is constructed of heat-treated steel and features short spikes machined into its front. According to Troy, it can be used as a breaching device if needed. I didn’t note any significant concussion while shooting the Troy M7A1 PDW at the range, even while prone.

The handguard is Troy’s 7.2-inch Alpha BattleRail. The Alpha is made of aluminum and stainless steel components. As you might expect, it features a Picatinny rail along the top with markings so that you can return accessories to their rightful place. The Alpha has large circles cut into it, and Troy claims it disperses heat better than other handguards close to the barrel. It has its own proprietary attachment system for attaching accessories, and long and short Picatinny rail sections are available for the attachment of lights or other accessories. Troy also includes its Squid Grip grip panels. They’re different looking but provide excellent grip.

As you might expect, the backup sights are Troy’s outstanding folding BattleSights. These sights are easy to use and durable. I have several pairs on various other guns and typically only think of the Troy sights when I need a set of BUIS. The sights co-witnessed in the lower third of the EOTech holographic sight I attached for testing.

The lower receiver features an ambidextrous safety and Troy’s Battle Ax Control Grip. It has a straighter angle and keeps the shooter’s hand positioning closer to that of a 1911 pistol. It’s comfortable and easy to hold, but I still prefer grips with a steeper angle. The grip combines with Troy’s oversized triggerguard and makes operation while wearing gloves easier.

There were no surprises when shooting the Troy M7A1 PDW. I had already experienced the PDW stock on a personal build, and similarly, the Troy-built gun ran like a top. The gun felt good with very smooth operation and soft recoil. With the Geissele trigger, cracking off several consecutive rounds was a cinch and only bettered the characteristics of the M7A1.

The short length of the stock might take some getting used to, though. I find that my nose is positioned right up against the side of the charging handle on the PDW. Many consider this the proper positioning anyway. To me it’s just a little too deep, but it’s simple enough to get used to. If you’re wearing a vest or plate carrier, you’ll find that the M7A1 fits nicely and works well in this scenario because the gun is never too long.

The only challenge I found with the Troy PDW stock was during accuracy testing in the prone position. It was not designed for this type of shooting, so it’s not a negative. It just didn’t make for the best accuracy-testing scenario. At some point I used a glove as a makeshift cheek pad. Testing was done at 100 yards.

I was most impressed by the Troy M7A1 PDW’s ability to go anywhere. It’s so tiny you can fit it in a small bag or throw it in your vehicle and have ample firepower if needed. It’s a small gun with big performance, and the timing is right for such a product.

For working professionals, it is an effective CQB weapon, taking up less space just about everywhere. If your objective doesn’t call for a longer weapon, the M7A1 PDW should fare extremely well with the right ammunition on board. It conceals well, and Troy also offers a select-fire version as well. 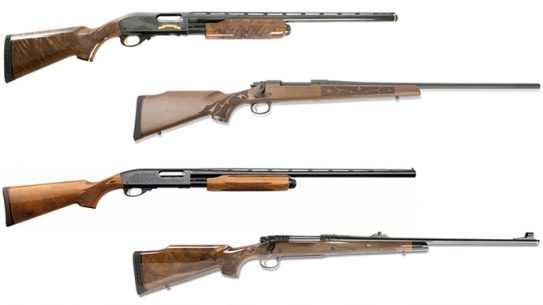