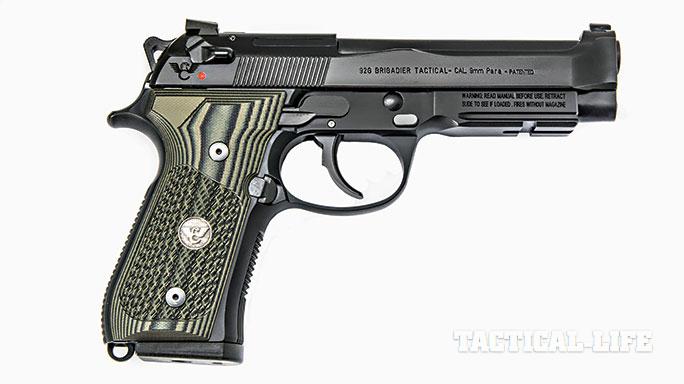 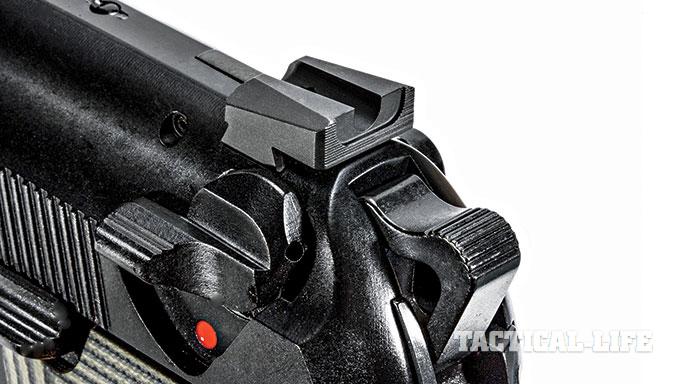 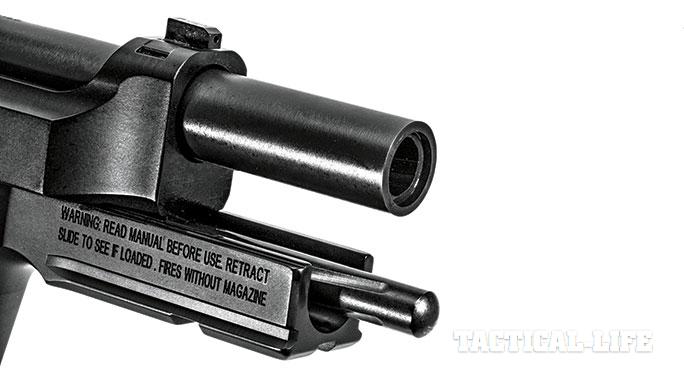 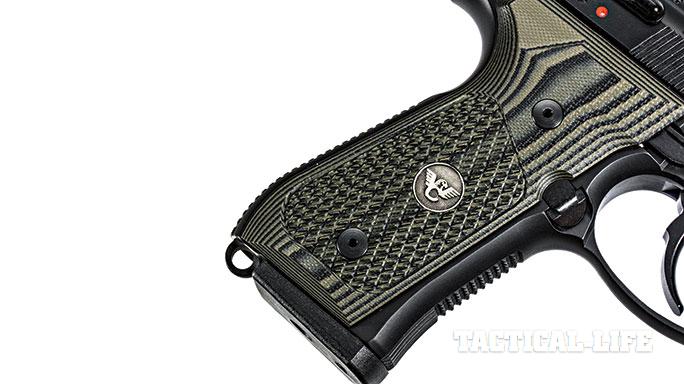 4 of 6
Gun Test: Wilson Combat 92G Brigadier Tactical 9mm
The front- and backstraps are checkered, and Wilson adds its G10 grip panels for a sure firing grip. 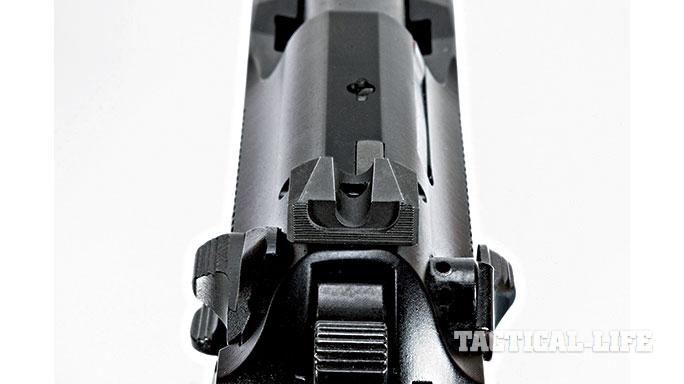 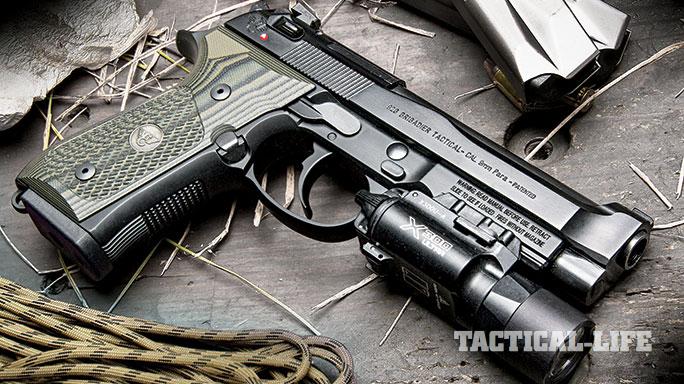 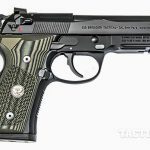 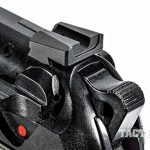 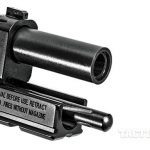 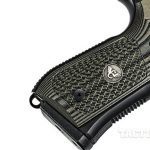 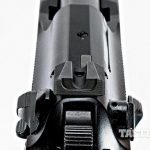 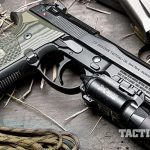 The Beretta 92-based M9 series of pistols has a hard-earned reputation for quality. Battle proven in numerous conflicts since its adoption in the 1980s, this is a design that has “been there and done that.” As a result, it can serve as a terrific platform for customization and enhancements. With a foundation this solid, the results of high-quality custom work can only be exemplary (with the right choices regarding enhancements and modifications, of course).

Wilson Combat is well known for its custom firearms. The company has been building some of the finest 1911 pistols, 870 shotguns and AR-platform rifles for a long time. Much of its success stems from founder Bill Wilson’s uncompromising attitude and unwillingness to conform. And, as a staunch supporter of the military and law enforcement professions, Wilson is well respected by some of the best operators around. Many of those training our most elite forces are his friends and colleagues. When those trainers and operators asked him to build an enhanced Beretta 92, he listened. He has collected Berettas for years, and he likes the platform, so why not?

Some months ago I tested several Wilson Combat-customized Beretta 92 pistols during a media event and hog hunt held at Bill’s Circle WC Ranch in Texas. In short, the pistols were impressive. Having carried a Beretta 96 years ago as a duty pistol, I thought the enhancements were well thought out, functional and well done. Wilson’s customization options are pretty impressive, but everyone in attendance clamored for a “stock pistol” with the most critical options already installed. Now Wilson Combat has come through with its Beretta 92G Brigadier Tactical series. These are factory-made pistols configured for hard use with Wilson Combat parts and available at a very reasonable price.

The Wilson Combat/Beretta 92G Brigadier Tactical is an all-metal pistol starting with a modified M9A1 frame with an accessory rail and a rounded trigger-guard. The front and backstraps are checkered for a solid grip. Wilson Combat G10 grip panels further enhance your hold in any condition.

“Starting at 10 yards and shooting off-hand, the Brigadier Tactical produced a 15-round group that measured less than an inch.”

Long a favorite among Beretta 92 users, the pistol features a heavy-duty Brigadier slide that is mated to the frame. The slide houses an “Elite”-style, match-grade stainless barrel with a recessed target crown. Dovetailed into the slide are a Trijicon front sight and Wilson’s Battlesight rear. Tritium allows for low-light use, while a white ring around the tritium facilitates daylight shooting. The rear sight features a “dish” that facilitates fast targeting without sacrificing accuracy.

Rather than a decocking/safety system, the Wilson 92G has decocking-only ambidextrous levers that snap back up when applied; there is no manual safety. The Brigadier Tactical is also fitted with Wilson Combat’s steel guide rod, which ensures solid operation and enhanced performance. A “D” hammer spring is installed, lightening the trigger for smooth double-action (DA) and single-action (SA) pulls.

Finally, the Brigadier Tactical is coated in Beretta’s black Bruniton finish, which protects against hard use. Wilson Combat logos, along with special serial numbers, make it clear that this is a special run of 92G pistols.

Optimized for tactical or competitive use, I tested this pistol as if it were going to work with a police officer. Early in my LE career, I fielded a .40-caliber 96FS, so testing the Brigadier Tactical brought back a memory or two. The 96FS was excellent as a duty pistol, with a smooth DA pull and crisp SA follow-up shots. Beretta 92/96s of various configurations remain the issued pistols for numerous agencies, along with being our current military-issued sidearm.

The only thing I added to my test pistol was my SureFire X400 light and green laser unit. I would use this laser/light on duty today. It provides the best of both worlds. It can be used as a light or laser only, or combined, and there is even an off switch. It has proven incredibly rugged and has served well in a couple of low-light competitions.

“The take-up was smooth and predictable, making it easy to get fast, accurate, first-round hits.”

Working through my holster inventory, there were a couple of Blade-Tech WRS Level III tactical holsters that worked with my test pistol. Blade-Tech’s TMMS quick-attach hardware mounted one of the holsters to my belt with ease. For transition drills and entry work, I would use my Seekins Precision SBR, so I set my belt up with magazine pouches to accommodate both it and the Beretta. All testing was accomplished using Survival Armor’s Paragon 6 body armor either under my shirt or in the company’s FOT-OC Assault carrier.

Beretta 92 pistols I’ve used in the past have always been accurate, even with the initial DA trigger pull. Recoil is minimal, and the design lends itself to accurate shooting. This pistol’s “Elite”-style barrel looked to yield impressive results, and it did not disappoint. Starting at 10 yards and shooting off-hand, the Brigadier Tactical produced a 15-round group that measured less than an inch. Moving back to 15 yards and firing three-shot strings, including the DA pull, the group widened up to about 1.5 inches. Moving forward to 7 yards, adding movement and drawing from my holster, the pistol continued to cut one ever-larger hole in the target. After 100 rounds or so, I began to not even notice the DA pull, allowing me to regain my effectiveness with this design.

The take-up was smooth and predictable, making it easy to get fast, accurate, first-round hits. I then moved to the benchrest at 25 yards for chronographing and “grouping.” My best effort measured just a tad over an inch using ASYM Precision’s 147-grain Match FMJ ammunition. While not a self-defense load, it highlights the accuracy of the pistol. Used by professional competitors, this ammo is soft shooting and loaded to match standards. My best group using self-defense ammunition, produced with Hornady’s 135-grain Critical Duty +P rounds, measured less than 1.5 inches. Nothing I tested at the range grouped outside of 2 inches.

Practical testing started around my vehicle. I shot the Brigadier Tactical through and around the doors, windows and from behind the wheels. Doing my best to avoid any conventional positions, the 92G ran flawlessly. Once dialed in, the first trigger pull never presented an issue. The SA pull has a bit of take-up and overtravel, but it remained predictable.

Moving to the shoothouse, I started out of the holster and used only the pistol. These sights are perfect. My other pistols are set up similarly, making the transition easy. The sights were very fast in the house and easy to pick up in low light. Working from the draw, it was easy to take up the first trigger pull, slowing me down very little. It took me some time to get used to the SA follow-up shots, but that comes from many years of using SA-only pistols. Follow-up shots in SA were solid, although it took me a while to get consistently fast split times.

Since entries using a pistol alone are rare, the next step was to practice transitions from a long gun. It also provided the opportunity to use the decocker in a more realistic environment. I strapped on my Seekins SBR in 300 BLK and spent more time in the shoothouse. The SBR is equipped with a titanium Liberty Suppressors Mystic X, making it very quiet and well balanced, as well as the Trijicon SRS, one of my favorite sights.

Transitions on the move were pretty smooth. The Beretta comes up quickly and is very controllable. My accuracy on the move was excellent, with double-taps and hammers staying inside 4 inches on all targets. Slowing down a little, it was possible to be extremely precise when necessary. Pistols with decockers should not be holstered without decocking first, and the 92G’s decocker was easy to access. I would grip the pistol with both hands and use my off hand to decock the pistol prior to reholstering. It was also easy to access the decocker with just my strong hand when performing one-handed transitions. Shooting left-handed, the roles were reversed but equally effective. This is by far my preferred setup with these types of pistols.

As expected, the Brigadier Tactical functioned flawlessly using several types of ammo ranging from low-velocity match rounds to +P rounds. The felt recoil is very light due to the heavier Brigadier slide and the general light-recoiling characteristics of the 92 platform, and Wilson Combat’s G10 grips enhanced my control.

Wilson Combat did an excellent job of setting this pistol up. Out of the box, it is perfectly suited to duty or even action pistol competition use. Every upgrade enhances reliability, accuracy and comfort without the need for further enhancements. After a solid couple of days with this pistol, I might just have to keep it—something I haven’t said about a DA/SA pistol in a long time! 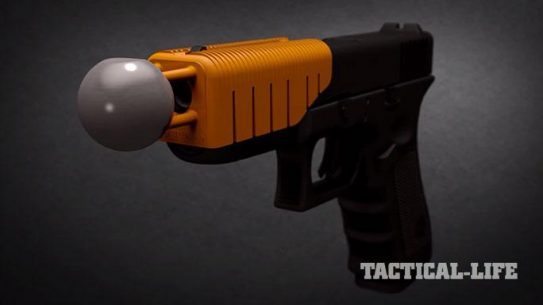 Ferguson Police explore the 'Alternative,' a device that turns any officers bullet into a...