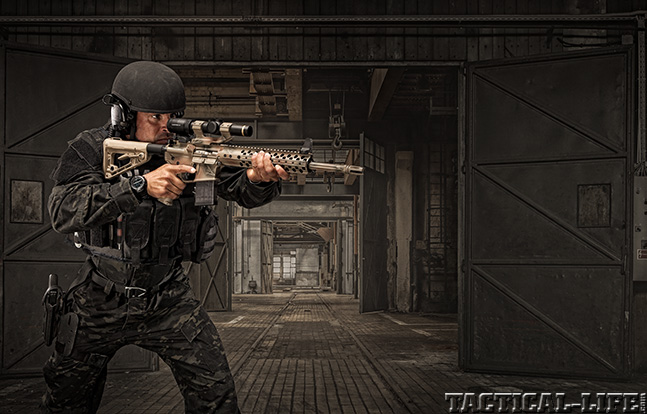 “Those who can, do. Those who can’t, teach.” I’ve heard this hackneyed quote too many times, even related to LEOs charged with firearms training. This is greatly overshadowed by another: “Those who can, and have, should teach.”

Would you want to learn defensive tactics or firearms from a field-training officer whose ideas came from the back of a cereal box? Or would you prefer to have an expert who has “been there, done that” in the real world? Similarly, for critical gear for real-life situations, do you want someone who has massacred uncounted cardboard attackers, shrugging off misses because his next run will be better, or the advice of someone who pushed his “have-to work” weapons through mud and muck while bullets whistled by him? Of course, experience does not always mean someone knows why a technique works or can teach a frog how to jump, but if they can, well, it’s sort of like a perfect storm.

A storm—a force of nature—may be a good adjective for describing MSG Paul Howe, who spent half his U.S. Army career in special operations, including serving as a tactical team leader and senior firearms instructor. A survivor of the Battle of Mogadishu, commonly known as “Black Hawk Down,” and other less publicized encounters, Paul Howe knows his stuff.

“Wearing Paul Howe’s name, the AR must possess the features that he feels are important, with no added frills—whether it be a working carbine for LEOs or operators overseas.”

How does this translate to LE work? Howe did a stint in law enforcement before joining Uncle Sam’s military. But, more importantly, since 2000, after opening his training school, Combat Shooting and Tactics (CSAT), most of Howe’s clientele have been LEOs, many of the SWAT persuasion, in law-enforcement-focused classes. In his “spare time,” Howe has written several books on leadership and starred in Panteao Productions videos.

After all of his years in special operations, running and teaching the AR in all corners of the world, Howe has developed strong opinions about America’s black gun, from its uses and construction to its accessories. Howe does not including anything on his fighting weapons that adds weight or bulk unless it serves an important purpose. With Paul Howe’s strong opinions and experience, when it came time to collaborate with an AR builder and stake his name and reputation on one of the company’s products, it wouldn’t be just any builder. It would be someone delivering the goods every time—and Wilson Combat is one such company.

Just like the excellent pistols upon which Wilson Combat was formed—the product of Bill Wilson’s hands, sweat and knowledge—today’s Wilson Combat ARs are built to deliver accuracy, effectiveness and constant reliability. No shortcuts are taken. Over the past 15 years, Wilson Combat’s AR production has increased, along with its expertise in building these carbines.

Why the emphasis on producing only top-notch firearms? Simple. Bill Wilson and his crew realize every day, here and in other less-pleasant places, people strap on a Wilson Combat 1911 or sling up one of the company’s ARs or shotguns, depending on it to bring them home at the end of the day. Wilson Combat’s commitment has to be one of the top reasons Paul Howe felt safe connecting his name with its ARs. Thus, the Wilson Combat Paul Howe Tactical Carbine (PHTC) in 5.56mm NATO was born. 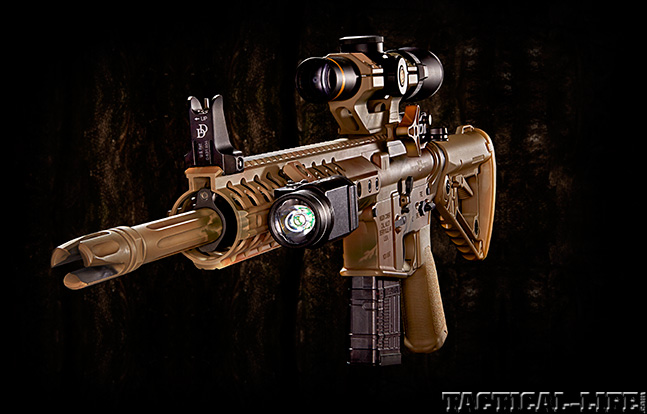 Wearing Paul Howe’s name, the AR must possess the features that he feels are important, with no added frills—whether it be a working carbine for LEOs or operators overseas. Regarding the PHTC, Howe says, “Were I to have the choice of only one gun, this is the gun it would be. I could do short-, intermediate- and long-range work with this one rifle.”

The details of the PHTC are impressive. Starting at the front, the match-grade, 416 stainless steel, hand-polished, medium-profile, 1-in-8-inch-twist, 14.7-inch barrel is capped with a permanently attached Wilson Combat Accu-Tac flash suppressor, which brings its overall length to 16.1 inches. The barrel also has evenly distributed, deep, weight-reducing flutes. The PHTC utilizes a mid-length gas system with a low-profile gas block. Chambered for 5.56mm NATO, the upper receiver also features M4 feed ramps, a Wilson Combat charging handle and a Robar-NP3-treated, magnetic-particle-inspected bolt and bolt carrier, which combine for smoother operation and improved reliability.

Surrounding the barrel is Wilson Combat’s lightweight, 10.4-inch TRIM (Tactical Rail Interface, Modular) handguard, which is machined from 6005-T5 aluminum extrusion and given a mil-spec hardcoat anodizing. This forend is actually trim, with surprisingly comfortable, non-abrasive surfaces, and users can add rail sections for mounting accessories such as lights and lasers. The absence of integral side and bottom rails allows the 12.2-ounce TRIM to fit virtually everyone’s hands. There are integral quick-detach (QD) sling swivel attachment points near the TRIM’s rear on each side, and a 10/2 o’clock QD sling swivel provides a third option. A 2-inch rail section was also included with the PHTC for attaching lights and lasers.

A sturdy, 1.1-ounce Daniel Defense fixed front sight is bolted to the TRIM’s top rail. CNC-machined from a single piece of 6061-T6 aluminum and given a mil-spec Type III hardcoat anodizing, the sight is extremely durable to survive harsh use. The design also makes the sight essentially snag free. I have Daniel Defense’s sights on several ARs and can attest to their ruggedness from clumsy accidents!

At the rear of the forged, 7075-T6, flattop upper receiver’s rail is Wilson’s flip-up rear sight with Howe’s CSAT aperture for fast targeting. A few minutes on the range will prove how well the CSAT works in CQB, removing guesswork from holdovers.

My test PHTC also came with an optional Wilson Combat CNC-machined, 30mm Accu-Rizer AR scope mount on the top rail, which held Paul Howe’s specified Leupold 1-6x24mm VX-6 scope with a FireDot Duplex reticle. Removing and reattaching the Accu-Rizer yielded no perceptible shift in zero, making it a good choice for designated marksmen. The VX-6’s FireDot Duplex reticle has to be experienced to understand how well it works in low-light and CQB situations.

“A survivor of the Battle of Mogadishu, commonly known as ‘Black Hawk Down,’ and other less publicized encounters, Paul Howe knows his stuff.”

The lower receiver also features an enlarged triggerguard and Wilson Combat’s two-stage Tactical Trigger Unit (TTU). Heavier springs raise the trigger pull to 4.5 pounds, which Howe likes for gloved use. The buttstock is a six-position-collapsible Rogers/Wilson Super-Stoc, complete with a Cam-Lock System on the staked receiver extension tube. Adjusted to the correct length of pull, the Super-Stoc locks solidly in place, providing fixed-stock rigidity. Ambidextrous QD sling attachment points in the rear of the stock are supplanted by a sling attachment loop.

Now for the 300-pound gorilla in the room—immediately visible when extracting the carbine from its black case—Wilson Combat’s striking camouflage Armor-Tuff finish. Hand-applying its pattern over a Flat Dark Earth base coat on the carbine creates the finish. Perfect for urban and rural environments, it reduces the carbine’s infrared signature.

So far everything, excluding the Accu-Rizer scope mount and Leupold VX-6 scope, is standard equipment on the Wilson PHTC. There are two additional options with Paul Howe’s approval. I received the Blue Force Gear Vickers Combat Applications sling in coyote brown with two push-button QD sling swivels. This sling is hard to beat! The final option is Streamlight’s 630-lumen TLR-1 HL, which is excellent for clearing rooms or exterior areas. Impervious to shock, the TLR-1 HL is perfect for use on a duty carbine and has a 50,000-hour lifetime.

After numerous trips to the range and lots of rounds downrange, one thing became eminently clear: Paul Howe and Wilson Combat make a great team! The PHTC provided enough accuracy for potential average and well-beyond-average officer-involved shootings. The average of all groups fired at 100 yards was 1.04 inches, with the smallest group measuring jut 0.93 inches—a testament to the barrel’s quality and 1-in-8-inch twist rate along with the stability of the Super-Stoc. The PHTC remained exceptionally accurate out to 200 yards as well. The 4.5-pound trigger pull of the Wilson TTU worked just fine for me, even using gloves.

During a few exercises with a TLR-1 HL added, the PHTC’s shorter-than-normal overall length made maneuvering in close confines easier, as did the absence of extraneous rails and add-ons that might get snagged unexpectedly.

As expected, Leupold’s VX-6 scope was crisp and clear, and, dialed to up to 6X magnification, made testing the carbine’s accuracy easier. Dialing it down to 1X with the FireDot reticle powered, it worked well during the CQB exercises.

I can’t fault any decisions Paul Howe has made regarding the PHTC, including teaming up with Wilson Combat! Every feature was specially chosen with those who go into harm’s way in mind, making it an excellent LE carbine. Even though its CQB performance was flawless, should an officer opt not to add the Leupold and Accu-Rizer combination for financial reasons, they might not miss it 99 percent of the time, but the combination is certainly sweet. I’d cough up the cash.

In fact, when it comes to my hide or of those I’m tasked with protecting, I tend not to give as much consideration to monetary deliberations. I am always looking to gain an edge, and the Wilson Combat Paul Howe Tactical Carbine would be an excellent edge to have on your side! 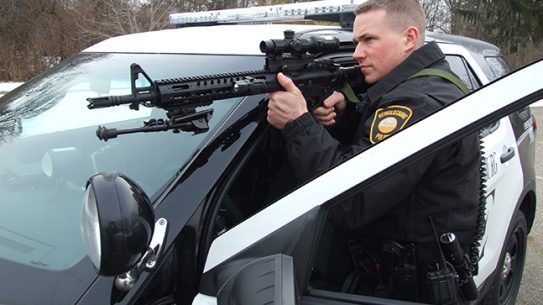