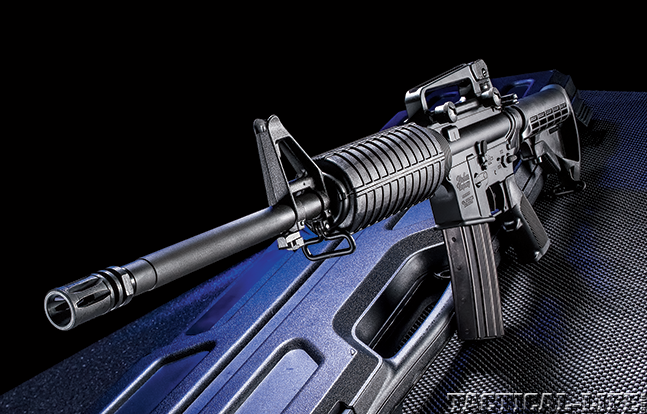 1 of 7
Gun Test of the Windham Weaponry HBC 5.56mm Carbine
The heavier barrel of the HBC adds weight up front, reducing muzzle rise and improving its accuracy to sub-MOA levels. 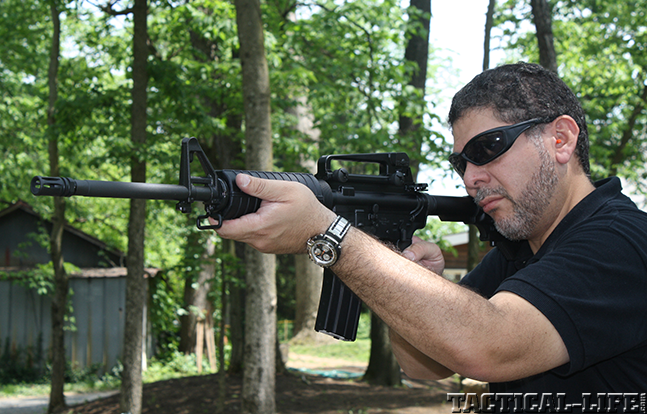 2 of 7
Gun Test of the Windham Weaponry HBC 5.56mm Carbine
On the range, the HBC was handy and very comfortable to shoot, with zero malfunctions and excellent accuracy. 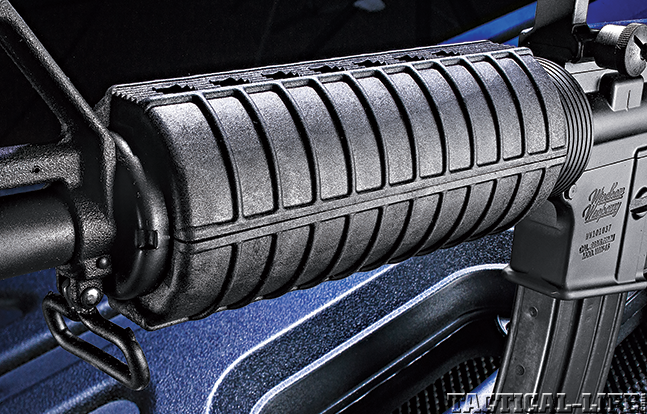 3 of 7
Gun Test of the Windham Weaponry HBC 5.56mm Carbine
The handguards have double aluminum heat shields that protect the carbine-length gas tube as well as the user’s hands. 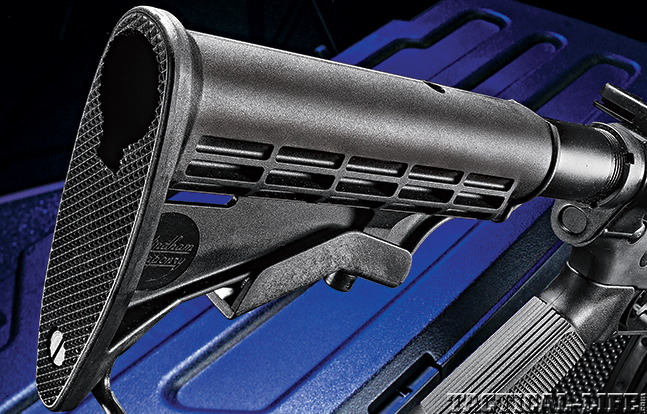 4 of 7
Gun Test of the Windham Weaponry HBC 5.56mm Carbine
The six-position-collapsible stock makes the rifle adjustable for various officers, including those wearing body armor. 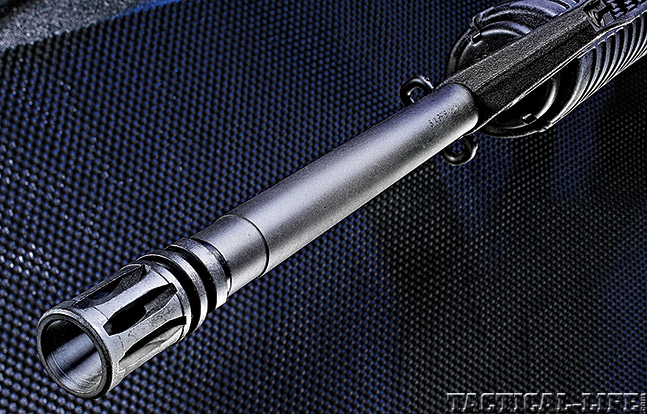 5 of 7
Gun Test of the Windham Weaponry HBC 5.56mm Carbine
Heavy barrels on ARs are more durable than standard barrels and perform better during full-auto fire. 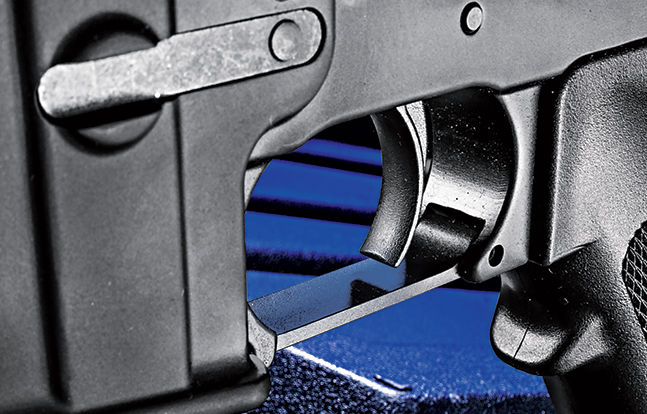 6 of 7
Gun Test of the Windham Weaponry HBC 5.56mm Carbine
All of the controls are in standard AR positions, and the trigger is a mil-spec, single-stage unit that is ready for duty. 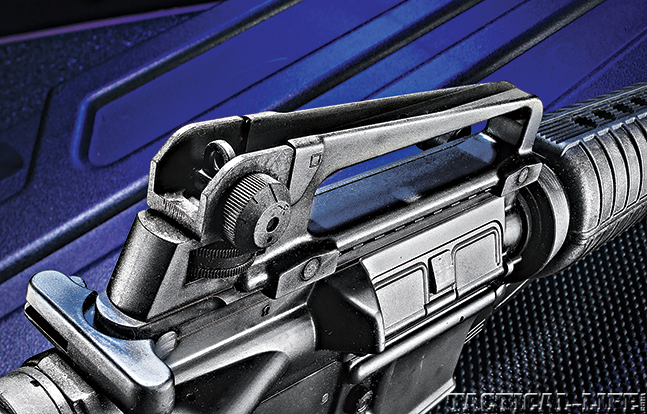 7 of 7
Gun Test of the Windham Weaponry HBC 5.56mm Carbine
The HBC comes with a removable carry handle/rear sight that is adjustable for both windage and elevation. 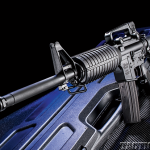 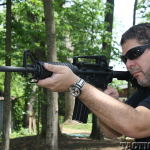 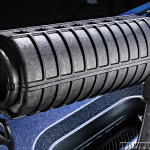 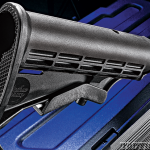 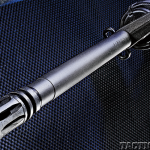 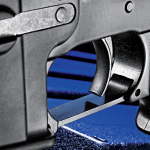 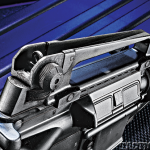 In many parts of the world, it is not unusual to see military units patrolling tourist areas and government buildings armed with their standard-issue battle rifles. Likewise, specialized police units armed with rifles or submachine guns are common sights at airports and other facilities overseas. These are standard security and visibility operations that, to some American civilians, might seem disconcerting when seen for the first time.

American police officers, of course, don’t use their patrol rifles to “patrol” in the traditional sense. Rather, they use it as a specialized piece of equipment with a specific purpose, and it stays in the patrol car until it’s needed. As such, the rifle’s weight is less of an issue and the benefits of a heavy-barreled AR may be better appreciated.

Windham Weaponry, by now a well-known and well-established player in the AR market, has released the new HBC (Heavy-Barrel Carbine), which offers all the advantages of its standard rifles and then some. Made in Windham, Maine, by a cadre of veteran AR-makers with decades of experience, these rifles have found increased acceptance among law enforcement, including the Maine’s Department of Inland Fisheries and Wildlife.

The HBC is a semi-automatic, direct-gas-impingement AR carbine chambered in 5.56mm NATO with a heavy-contour, 16-inch barrel. Notably, the barrel is made from 4150 chrome-moly-vanadium Mil-B-11595E steel, which makes it truly mil-spec with the proper amount of carbon and vanadium to strengthen the barrel. This high-quality level of steel isn’t necessary for most sporting uses, but it is perfect for a rifle designed for serious duty or full-auto fire. The barrel is also chrome-lined for added durability and reliability.

There are a few advantages in having a heavy barrel. The extra weight towards the front of the rifle not only dampens recoil, but it also helps prevent muzzle rise and keeps the rifle on target for easier, faster follow-up shots. The thicker and stiffer barrel profile also helps minimize point-of-impact shifts as a result of using a sling or bipod, which can improve accuracy. A thicker barrel also takes longer to heat up, which can improve user comfort. Plus, the Windham Weaponry HBC only weighs about half a pound more than the company’s comparable M4-profile AR carbine.

The barrel has a fairly standard 1-in-9-inch twist rate, which does a good job of stabilizing a wide range of bullet weights, including very low-weight ones for specialized uses. A faster twist rate, such as a 1-in-8-inch or 1-in-9-inch, will better stabilize much heavier .223 ammunition, but this is hardly necessary in most applications, especially in the short ranges typically encountered in law enforcement. I found that this rifle actually performed best with 55-grain ammunition.

Another mil-spec feature is the addition of M4 feed ramps at the back of the chamber. These are cut wider and lower than those for the standard AR rifle, and are designed to improve reliable feeding of rounds from the magazine into the chamber. This can be especially important in carbines and under less than ideal conditions where dirt, grime and moisture can be introduced.

The standard threaded muzzle is topped off with a removable A2-style flash suppressor, and the front sight base is elevation
adjustable. Some folks are sticklers for properly F-marked bases on carbines, and while the Windham Weaponry HBC is not so marked, this is a distinction with very little real-world application. Because of the difference in sight radius with a carbine over a rifle, an F-marked sight base is infinitesimally lower than a standard base. This is only an issue when using iron sights at distances past 200 yards, and it can be easily corrected by installing a taller front sight post.

Both the upper and lower receivers are manufactured from forged 7075-T6 aluminum and feature a well-applied black hardcoat anodized finish. The upper receiver features a flattop design with a removable carry handle with A4 dual aperture sights, which are elevation and windage adjustable. There are no indexing marks on the top Picatinny rail, so users will need to take care when removing and replacing optics in order to maintain proper zero.

The CAR-style black plastic handguards feature double aluminum heat shields that are extremely effective at protecting the carbine-length gas tube as well as the user’s hands, as I can attest after a full day of range testing with a hot barrel.

The bolt is made from Carpenter 158 steel, and it is both high pressure (HP) and magnetic particle (MP) tested. While many manufacturers will pressure-test their bolts, most do not bother with MP testing, which is only required of true mil-spec bolts. This consists of using a magnetic field to detect any imperfections in the surface or subsurface of the part, ensuring that only the highest-quality parts are being used.

The bolt and bolt carrier are also both phosphated and chrome-lined. The bolt carrier has a mil-spec M16 contour, as opposed to a cheaper commercial bolt, which is stronger and heavier to ensure longer and more reliable operation, and it’s paired off with a standard carbine buffer. It should be noted that mil-spec M16 bolt carriers are legal to install in semi-auto rifles. The gas carrier key is also properly staked.

The controls on both upper and lower receivers—dust cover, forward assist, bolt release, magazine release, charging handle and safety selector—are all located in the familiar places, with nothing being ambidextrous. There are clear safety selector indicator markings on both sides of the receiver, so the rifle’s condition can be visually verified from either side. The triggerguard is also the fold-down aluminum type, which makes it easier to use the HBC while wearing gloves.

The M4-type collapsible buttstock, which features the Windham Weaponry logo, can be adjusted for six different length-of-pull positions, allowing officers with different statures or wearing body armor to use the same rifle. The stock on my test HBC was well installed and exhibited an excellent fit with very little play. Also, the fit between the upper and lower receivers was very tight, and there was virtually no play between them.

The lower receiver also features a standard military-type plastic pistol grip with a finger groove and a slightly flared magazine well. The Windham Weaponry logo is prominently displayed on the left side of the magazine well and consists simply of the company name in a cursive-type script, doing away with a more aggressive logo that may be off-putting to some department heads.

On the range, the added weight did indeed soak up some of the already low recoil of the 5.56mm NATO round and made shooting significantly more enjoyable. It was definitely easier to keep the sights on target for faster follow-up shots. I tested the rifle right out of the box and experienced no malfunctions of any sort over two days of range testing, with no maintenance performed in between.

For accuracy testing at 100 yards, I used a 3-9×40 Trijicon TR20-2 AccuPoint scope with a mil-dot crosshair reticle while firing from a stable benchrest. The excellent fiber optics on the Trijicon scope gather ambient light to illuminate the center amber dot of the reticle without batteries.

From a benchrest at 100 yards, the HBC’s accuracy was actually quite good, especially for a patrol rifle. The average spread for all types of ammunition tested was under 2 MOA, and one five-shot group of Winchester 55-grain FMJ ammunition produced a sub-MOA group. Once again, this just proves how dependent each individual rifle is on the type of ammunition used. I have seen good-quality rifles go from sub-MOA to 4 MOA just based on ammunition selection.

Windham Weaponry ships its rifles in a black, hard-plastic case with one 30-round magazine, a sling and a well-illustrated operator’s manual. A fully transferable lifetime warranty is also included with every rifle. Those departments seeking a high-quality AR need only look to the good folks in Maine for a very consistent selection. I have tested nearly all of Windham’s offerings and have never had a single malfunction or poor accuracy results. The company is also continuing to expand its offerings while striving to meet growing consumer demand. Regardless, Windham Weaponry isn’t cutting any corners or sacrificing on quality, and this is a level of dependability that is sure to be appreciated by any officer assigned the HBC as his or her patrol rifle. 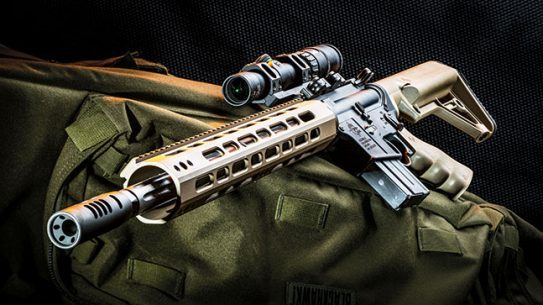