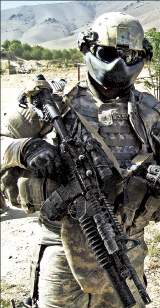 Soon after Marine reservist Ben Mahan of Indiana arrived in Iraq in 2003, he realized turret gunners riding shotgun atop Humvees and other military vehicles are extremely vulnerable to sniper fire, bomb-blasts, flying gravel and other high-velocity hazards.

Although current military helmets and goggles can’t stop a 7.62-caliber bullet, they greatly reduce fatal or disfiguring injuries to the warfighter’s eyes and head from shrapnel and other hazards—but what about the face, mouth and jaw? Mahan recalls a fellow unit member losing his front teeth to fragments of an IED (improvised explosive device). He also saw many more soldiers and Marines put out of action when bomb blasts rocked their vehicles so violently they broke their nose, jaw or facial bones on rifle butts, steering wheels or a buddy’s helmet.

“We were doing security patrols and convoy security, and guys were getting hit in the face by everything imaginable,” Mahan said. “You had your flak jacket, helmet, goggles, body armor and the .50-cal mounted on top, but you had nothing to stop shrapnel from hitting your face.”

By the time Mahan’s unit came home from Iraq, everyone had a list of equipment they would bring along if they were redeployed. For his part, Mahan searched for armor that would spare everyone a lifetime of misery and medical bills from facial and dental wounds. His efforts proved disappointing.

“I spent a lot of time on the Internet, but I couldn’t find anything like what I was envisioning,” Mahan said. “All I could find were some four-pound riot shields that police use. No soldier or Marine is going to wear a four-pound shield on their helmet all day and besides, those shields are clear. After a couple of sandstorms, you wouldn’t be able to see out of them. When I couldn’t find what we needed, I decided to make it myself.”

Shield Creation
By the time his Marine Corps reserve unit redeployed, however, Mahan couldn’t go because he was hurt in a motorcycle accident. This only intensified his search for facial protection. “I wanted to give them something I knew they needed and wanted,” he said.

With help from his father, Vance, and a product-development company, they launched MTek Weapons Systems and crafted the Predator Facial Armor System Technology, or FAST. The Predator FAST G-Series face shield weighs less than a pound, and it’s made mostly from Kevlar. The shield attaches and detaches from standard military helmets with one hand, and is held in place by a rail system. During its development, MTek sent more than 50 face shields to Marines and soldiers in Iraq to test the product while protecting them.

Meanwhile, the Army was impressed enough to order 10 prototypes for testing in 2008. Meanwhile, during the federal government’s 2008 budget process, the Mahans’ congressman, Rep. Steve Buyer, R-Monticello, IN helped MTek secure a $1.14 million contract to develop final versions of the shield that can stop everything from shrapnel to a 7.62 bullet, depending on the model.

Ben Mahan says the Predator FAST G-Series incorporates rigid armor and is designed for turret gunners. Another MTek shield is softer and less rigid to allow war­fighters to press their face tightly against a rifle stock when operating on foot away from the vehicle.

“We now have different models for different levels of protection for the varied missions they handle,” Mahan said. “The idea is that you determine the most likely threat you’ll encounter on a particular mission and protect against that. You can swap them out should the mission requirements change. The more options we can provide, the safer they’ll be.”

When skeptics see the Predator FAST model, which looks like something out of Star Wars, they assume it would be too hot to wear in desert environments. Mahan refutes that. “It actually rides about 1 inch to 1.5 inches away from the face, so guys say it keeps them cooler because it keeps the sun off their skin,” he said. “Air flows in behind it so your goggles don’t fog. There’s enough space to use communication equipment. Guys can even smoke a cigarette while wearing it.”

Mahan said the Predator FAST is designed to balance out the helmet and give warfighters full range of motion and peripheral vision. “It’s designed to feel like it’s part of your body,” he said. “It’s protecting you, but you hardly know you’re wearing it.”

Mahan said the company hopes to be manufacturing the shields by the thousands before the end of 2009. The company has been selling its face shields to individual warfighters the past couple of years, and is optimistic big orders will come in as they perfect their manufacturing processes to handle massive numbers. Those numbers could rise further yet as law-enforcement agencies see how well early versions of the shields stop shotgun pellets and handgun bullets.

“The reports we’re receiving from Iraq and Afghanistan confirm we’re already having an effect on the safety of our soldiers and Marines,” Mahan said. “The same will be true with police agencies. This looks like a Star Wars creation, but it’s functional. This isn’t something that will go to war in 20 years. It’s already there and it’s now ready to go in big numbers.”

Gates Will Remain as Secretary at Least Another Year

Soon after Marine reservist Ben Mahan of Indiana arrived in Iraq in 2003, he…