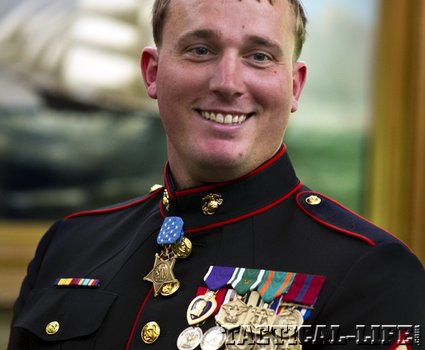 Did you make it to any Marine Corps Birthday Balls?
I did five, and I have to tell you about a special gift I received at one. The units sponsoring the Balls always have a token gift for the speaker, or Guest of Honor. But sometimes they come up with stuff that really knocks me out. Some years ago at a Ball in Okinawa, a Marine Supply unit presented me with a framed copy of the original battle plan for the invasion of Iwo Jima. They found it while cleaning out some old desk drawers on Okinawa. Another amazing gift was given to me this past November at a Ball I’ll never forget. It’s a grenade box turned into a kind of miniature bar, with special slots for wine and other stuff.

But you don’t drink, do you?
Oh, I’m not a teetotaler. I’ll have a beer or something every now and then to join in the crowd. But I don’t like drunks. When I start hearing that “I love you, man!” crap, I’m outta there.

What new book do you have for us?
One of the best close-up, shot-by-shot accounts of firefights with the Taliban in the Afghanistan mountains is Into the Fire, written by Marine Cpl. Dakota Meyer with Bing West. Meyer’s actions earned him the Medal of Honor, and he lived to tell us about being ambushed and outnumbered, fighting alongside U.S. Army troops and officers.

As Meyer’s book reminds us, the individual rifle-carrying soldier can be a force to be reckoned with in battle. We’re seeing lots of sniper shooting and training on the ’net or in books, and USMC leadership is strong in this area.
The Marine Corps Scout Sniper School produces the best-trained snipers in the military today. When they’ve been in action in Iraq, and are still in action in Afghanistan, they provide more security for convoys and conduct reconnaissance and surveillance for infantry units. They are like the point of the dagger thrusting into enemy-held ground. Sniper trainees come to the Marine School from the other service branches, and they’d better have their act together, or they’re not going to pass.

Are you ready for more Sniper Matches in rifle-shooting competition in 2013?
Absolutely. I shot two last year, without winning I have to admit, and probably will shoot in three next year. The popularity of these matches is soaring, like interest in sniper-shooting itself. I’ve been attending the Creedmoor Matches for three years now, and two years at the National Matches at Camp Perry, Ohio. In Vintage Sniper Rifle matches I believe you can shoot any rifle that was designated a sniper rifle pre-1952. I shoot the M1 Garand D model, which is the sniper rifle. My shooting partner, Dennis DeMille, shoots the ’03 Springfield. One rifle and its scope are set up for 300 yards, the other for 600 yards. We alternate, each guy shooting both ranges and both rifles. Talk about tons of fun!

Do you think we’re ever going to hear the truth about the terror attack on our embassy in Benghazi, Libya?

In my opinion, no… Politicians in the know will probably continue to cover up the true details from the American people about this preventable tragedy as they have since day one of this thing when they denied it was a terrorist attack. The event took place on the anniversary of 9/11, and they tried to label the disaster as a spontaneous outpouring of rage over some kook’s YouTube video. In addition, we know now that we had people in that embassy a week before the attack begging to have help and more security. I remain skeptical. 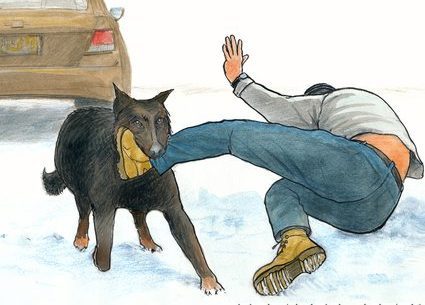 and his official website. GUNNY STUFF For all kinds of Gunny memorabilia and DVDs,…