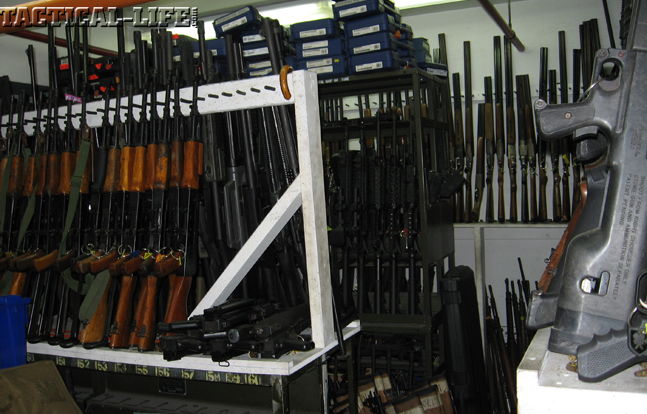 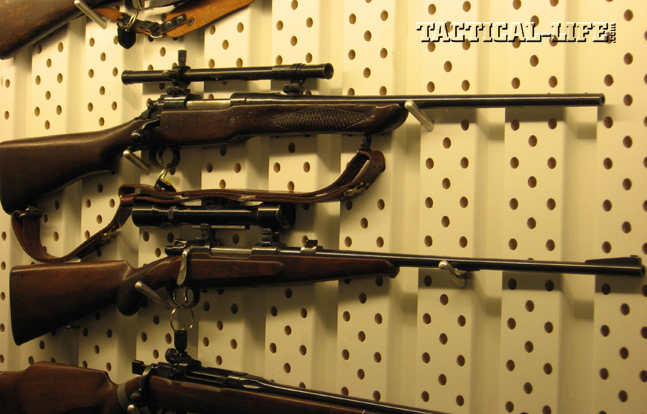 2 of 4
Guns in Hollywood – Sniper Rifles 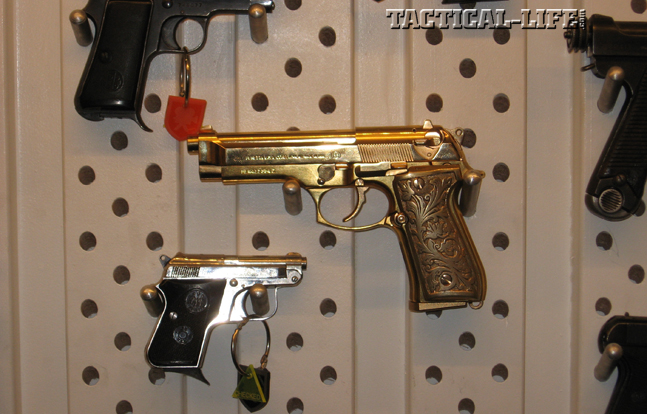 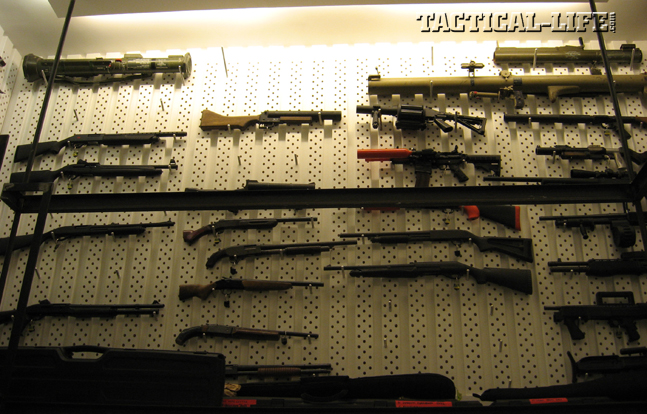 4 of 4
Guns in Hollywood – Take your pick 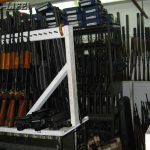 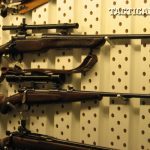 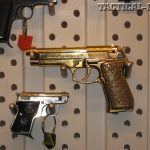 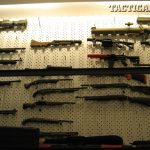 During its run, the show 24 featured a Jack Bauer who used almost every type of weapon imaginable to accomplish his various missions. We saw Jack use a Sig Sauer P228 and P229, a Glock 17, a Magnum Research Lone Eagle, a Beretta 92FS, a Smith & Wesson Model 5904, Israeli Weapon Industries’ Uzi submachine gun, an HK MP5A4, an HK USP, a Colt M4A1 carbine, a Mossberg 500, an Ingram MAC-10, the Beretta 9000S, a Remington 870 and a Walther PPK, just to name a few. Every time Jack grabbed a weapon, he used it expertly, as any CTU agent should.

When I watched 24, and every other show with guns in Hollywood, I’m always left with one question: How did they learn to use that?

Unsung Hollywood Heroes
Pete Dancy is just an average guy with a pretty extraordinary job; he’s one of the leading prop masters for the motion picture industry in New York City. Dancy said, “New York is very busy these days with movies and TV shows. Within 50 miles, you have many different areas to use to film, and due to that more productions than ever are being filmed here.”

A former U.S. Army National Guardsman, Pete attended film school at the City University of New York with an eye toward making movies—until he met someone that actually made the movies real.

“I was told the prop masters are the ones that make the films real. They are responsible for everything an actor touches, from animals, cars and coffee cups to firearms,” Dancy said. “When it came to firearms, my former military training was an asset. From obtaining the weapons for a show to safely teaching the actors how they worked and how to fire them, all fall to a prop master,” said Dancy.

“Even as a prop master, the ability to use firearms is strictly regulated. You need certain licenses, FFLs [Federal Firearms Licenses] and training. Some of that training is offered by our union, Local 52, here in New York. Other training is available from the manufacturers, the NRA and law enforcement. Without most of that, you wouldn’t be allowed to procure or coordinate the use of weapons for any film or show,” said Dancy.

“Currently, I’m working on the show The Following with Kevin Bacon, about an FBI agent tracking some really bad people. In that show, Kevin has used several weapons, including a Colt 1911A1 and a Smith & Wesson Shield,” said Dancy. “I’ve also worked on plenty of other films and movies, and with most of them had to procure weapons. Since we prop masters don’t own or keep a stock of weapons, we need to go to someplace that does.”

The Specialists
In a non-descript building in lower Manhattan, The Specialists stock most of the products to make films seem real, including weapons. In its safe and on its walls one sees the rifles used by Tom Cruise in the film Jack Reacher. Also on display are Angelina Jolie’s HK MP5A3 and SIG556 SWAT (fitted with a SIG SG 550 series lower receiver) from the movie Salt. These weapons (and many more) were provided by The Specialists, a company built on the idea of providing the film industry with everything they need to make films seem more real.

Ryder Washburn, co-owner of The Specialists, told me, “The company was started by my father Richard Washburn in 1981. We are the largest theatrical weapons property house on the East Coast. In addition to the 5,000 blank-firing weapons in our inventory, The Specialists also supplies replicas and ‘non-guns’ for all on-set needs. Our inventory ranges from Paleolithic knives to Russian tanks, and our weapons experts are on hand to make your next project a safe and successful one.”
Since its creation, The Specialists have provided weapons and props for films, including The Bourne Ultimatum, The Bourne Legacy, The Dictator, I Am Legend, The Dark Knight Rises, The A-Team and The Avengers. Their TV credits include Boardwalk Empire, Person of Interest, Prime Suspect, Homeland, CSI, Law & Order: SVU and most other New York-based shows.

Steven Genna, one of The Specialists’ armorers, said, “We have lots of clients and some have specific needs. We have the capability to get exactly what they need, or can create what they need, as we did with Sacha Baron Cohen’s gold-plated Beretta 92FS that he used in the movie The Dictator.”

In addition to a large cache of weapons for films, The Specialists has full-service prop capabilities and can fabricate almost any and all special effects items, including fake weapons. Using rubber, plastic or other materials, The Specialists create costume materials and prosthetic devices to camouflage actors, along with any type of movie prop you could dream of.

Washburn said, “We’ve expanded our capabilities to meet the market needs, and currently the film market in New York is exploding. When it comes to our weapons, we have a proprietary method to make the weapons safe for film use. We obtain most weapons from the gun manufacturers, including Smith & Wesson, Colt, Sig Sauer, Glock, HK and others.”

According to Washburn, “Every state has different gun regulations, and we have to ensure our weapons meet the regulations of wherever they are going to be used. In New York, one of the basic requirements is the weapon has to be incapable of being disassembled. That requires us to essentially destruct and reconstruct a weapon to meet New York state law.”

Steven Genna told me, “We make the weapons incapable of firing real ammunition but, for film, they still have to be able to fire something, to make them appear real. To do so, we either acquire or make loads that will work in different types of scenes. So, a weapon fired at an actor in a scene from 5 feet away will use a different load than one fired 100 feet away. All this enables the film, and the weapons used, to have a look of realism in the safest possible fashion.”

Lights, Camera, Action!
Once the right equipment is procured and the weapons are on set, the cameras are set up and everyone is in position to film, it’s up to the prop masters to make things look real.

Ruth DiPasquale, who has been the prop master for shows including Royal Pains and Person of Interest, said, “We have to be prepared for everything and bring everything we need with us. If we forget one thing, it can ruin filming, so there is a lot of pressure on the prop masters to be ready all of the time.”

In Person of Interest, actor Jim Caviezel plays former CIA operative John Reese who is hired to try and prevent violent crimes in New York City. “In that show, I have had to equip Jim with plenty of different weapons, from the KRISS Vector to the HK G36C to the Barrett M107. Each one took a different amount of time and training to learn. Much of that training took place either just prior to or on the set,” said DiPasquale.

“Once we get the weapons on set, we set up some elaborate security and safety procedures to protect the weapons, actors and the public. We don’t want someone unintentionally walking off the set with a weapon or dropping one on the hood of the car and walking away. So I and my crew establish accountability measures to ensure that doesn’t happen,” said Pete Dancy. “We work with the local police to ensure we are operating in accordance of the local law, and the police add an additional layer of safety and security for the set.” 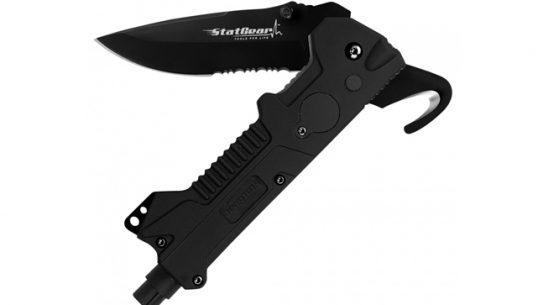