Guns Of The Texas Rangers

by D.K. Pridgen
in Uncategorized
0

0
SHARES
2.3k
VIEWS
Share on FacebookShare on Twitter
Stephen F. Austin probably never anticipated the historical impact of his organizing a small civilian group to provide protection for immigrants into Tejas. Austin called them “Rangers” because they ranged across the new Republic of Texas in their line of duty. Over generations of colorful history, his creation has evolved into today’s highly regarded Texas Ranger Division of the Texas Department of Public Safety. 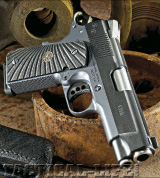 Little did anyone with whom Bill Wilson began his 1911 shooting, well over three decades ago, realize his interest in Colt 1911s would prove such a driving factor in his life. I even doubt his first efforts at pistolsmithing caused anyone to say, “Hey, why don’t you found a world-class pistolsmithing company?” Many handgun aficionados did kitchen table pistolsmithing then, usually inspired by George Nonte’s Pistolsmithing. Today, many thousands own pistols reflecting the success of Bill Wilson’s foray into pistolsmithing and his commitment to producing the best that Wilson Combat can offer.

It is also doubtful John Moses Browning expected that his most famous and enduring creation, the 1911, would be alive and kicking, with no signs of retiring, nearly 100 years after he finished the last of the Army’s requested improvements. Nor could Browning have anticipated the affinity the Texas Rangers would develop for his slab-slided handful of firepower soon after its introduction—or Bill Wilson’s 60 years later.

Self-sufficiency has been a common thread throughout Texas Ranger history, because there have always been so few Rangers at any time (even today there are only134 commissioned positions). On horseback pursuing Mexican bandits or errant Comanches, or in the seat of a Crown Victoria sleuthing out a serial killer, Rangers usually carry all their equipment with them. It will be robust and potent equipment, because when working alone only the best will do.

The .45 SAA Colt was a mainstay until John Browning completed his 1911 project. Shortly thereafter, many Rangers adopted the platform, first in .45 Auto, later in the .38 Super. Today, Texas DPS issues Sig Sauer pistols in .357 Sig, undeniably “robust, and potent, equipment.” However, as an elite division, the Rangers are allowed some latitude in what they carry, and a large number choose the 1911.

Bill was glad to do it. He had already established Ranger contacts, courtesy of another firearm industry name, Chip McCormick, who has ties to the group because of antecedents who were Rangers.

This is where I am supposed to say, “and the result was the Wilson Combat Texas Ranger Model.” Well, not exactly, as I found out when I requested one. Texas Rangers are an independent lot—always have been—perhaps from that time alone riding horseback across the vast expanse of Texas. No single model could offer every feature every Ranger might want.
Bill Wilson and Trace understood this, and Wilson had a simple solution: Offer each Ranger any 1911 Wilson Combat made, modified as they requested, but with special Texas Ranger markings. Slides are engraved “Texas Rangers” on the left side, and wear the Ranger badge logo on the right.

The Ranger Connection
While the first Wilson Combat pistol that started his journey to Wilson-Combat Ranger’s pistols was a CQB, Trace McDonald chose a built-to-order Professional Model. It’s a good-looking pistol! Trace’s Professional has everything to make it distinctly his own.
The Professional was developed to mate a full-size frame to a compact (4-inch) slide. The result? First, a frame handling eight-round Wilson magazines, for a nine-shot capacity, and one on which you can always get all your fingers. Secondly, a slide short enough to help with concealment, yet long enough to reduce the “whippiness” found on many truly short-barreled pistols, and still providing a good sight radius.

The frame is undercut at the front strap trigger-guard juncture, for a higher grip, and the front strap and flat mainspring housing are checkered in an effective 30-lpi pattern. A black Ultralight trigger and an Ultralight burr hammer are part of the system that provides a crisp 3-1/2- to 3-3/4-pound trigger pull. Slides wear a set of Wilson Combat’s Tactical Pyramid sights and ejection ports are lowered and flared. Inside the slide is a heavy tapered (cone) barrel, running above a standard-length recoil spring guide rod with an open-end reverse plug.

All-carbon-steel construction, excluding the hand-fitted, stainless-steel match barrel, is standard on the Professional, and a liberal coating of Armor-Tuff finish is applied to frame and slide, in matching or contrasting colors. Wilson’s attractive and functional, fully-checkered Diamondwood grips and a single-side, extended Tactical Thumb Safety are standard, as is the High-Ride Beavertail Grip Safety. And of course, all of the preceding is fitted by one of Wilson Combat’s skilled ’smiths, using CNC-machined internal parts, and the entire package dehorned. The result, no matter which Wilson Combat pistol, is a piece of fighting equipment—almost a piece of art—designed and built to work every time the trigger is pulled.

Trace, in the Texas Ranger tradition, had a few of his own ideas to personalize the pistol, opting for a stainless steel slide, coated with black Armor Tuff. The flats were then polished back to the metal, leaving the nooks and crannies filled with black for highlights. Below this was a lightweight aluminum-alloy frame, with a flat-black Armor Tuff finish, making the package lighter on the belt and giving a striking appearance.

Range Time
After acquiring his first Wilson Combat pistol, Trace McDonald started competing in USPSA matches. His training, natural abilities and the Wilson were enough for a good start in the sport. I’ve been around Rangers, guns, and popping primers, and they all can shoot.

Trace brought the pistol, and I furnished the ammo (except the load from Atlanta Arms, a company he routinely uses) and targets, and snapped the accompanying photos. The Professional’s groups were a little larger than I might have expected, but including this pistol, I have only test fired two .38 Super handguns. Regardless, any load tested had more than enough accuracy to “put paid” to a miscreant.

I jumped in and took one shot just to see how the Professional handled. The trigger pull was a crisp 4-1/2 pounds, with very little take up or over-travel. Trace made a good choice with the Professional! It balanced very well, and the sights were quick to recover. The Starburst Pattern G-10 grips really grabbed and held onto the hand, too. An excellent representative for Wilson Combat!

The Wilson Combat Texas Ranger Professional on Ranger Trace McDonald’s belt works, as our range outing proved. I’m glad for that because today’s Texas Rangers, just like those hard men who came before, still work in harm’s way. They deserve top-notch tools, and Wilson Combat 1911s are that! For more on Wilson Combat visit www.wilsoncombat.com.