A startup gun store is not exactly headline news, even less so on a national level. But Stumpies Custom Guns in Swansboro, North Carolina, is a major exception to this rule.

Founded by retired Marines Brad Lang and Johnny Morris, Stumpies would probably be regarded as just another small business that started in a shed near USMC Base Camp Lejeune and is now in a commercial location in Swansboro. Suddenly, however, the two vets found themselves on the crest of a massive wave of worldwide publicity when the company was featured in a 60 Minutes story on the Entrepreneurship Bootcamp for Veterans with Disabilities (EBV) program. EBV, a small business incubator based at the Martin J. Whitman School of Management at Syracuse University in New York and affiliated with seven other leading business schools around the nation, provides practical training in new business creation and management for vets and continuing support after program completion.

In the segment presented by Dr. Sanjay Gupta, Dr. Mike Haynie, Barnes Professor of Entrepreneurship at Syracuse, emphasized the massive and growing need to support more than 3 million veterans of Iraq and Afghanistan, nearly half of whom have disabilities from wounds or PTSD. Haynie, an Air Force vet himself, believes that equipping these heroes with the knowledge and skills needed to start and run businesses will enable them to overcome the challenges of their disabilities.

Stumpies was one of the startup enterprises covered in the story because its creation is not only a case study in potential business success, but also because it’s overwhelmingly inspiring.

“Stumpies Custom Guns incorporated in the spring of 2012, and the two entrepreneurs successfully applied for a Federal Firearms License (FFL), enabling them to sell and make firearms…”

Staff Sergeants Brad Lang and Johnny Morris paid an immeasurable price for their service to the Marine Corps and the nation. They trained together and volunteered for duty as explosive ordnance disposal (EOD) technicians, completing several deployments in Afghanistan and successfully defusing improved explosive devices (IEDs) in the world’s most dangerous combat theater, where IEDs have caused more than half of all battle-related deaths since hostilities began in 2001. Although assigned to different units, the two Marines were both operating in Sangin District, Helmand Province, in mid-2011 when IED blasts obliterated Johnny’s left leg and both of Brad’s. Months of hospitalization and rehab enabled Brad and Johnny to restart their lives, and as they recovered together at Walter Reed National Military Medical Center of Bethesda, they decided to focus on a shared longtime interest—firearms—and start a business.

Johnny, an Alabama native, grew up with guns and shooting. Before joining the Marine Corps, he worked at a local gun store and perfected his gunsmithing skills, including repairing, refurbishing and building a variety of firearms from the ground up. Brad, who grew up in Alma, Michigan, brings similar shooting experience to the enterprise along with extensive training in CNC machine tool programming, including award-winning entries in SkillsUSA competitions. Brad’s machining expertise in fabricating custom gun components complements Johnny’s gun-building talents and will enable the duo to provide customers comprehensive firearms services as well as sales.

Their abilities were unquestioned, but the two vets labored over a name for their new business. Brad’s wife Alyssa intervened. “You should call it Stumpies,” she said. “You’ve only got one good leg between the two of you!” Problem solved. Stumpies Custom Guns incorporated in the spring of 2012, and the two entrepreneurs successfully applied for a Federal Firearms License (FFL), enabling them to sell and make firearms.

Acceptance in the EBV program at Syracuse University, limited to just two-dozen participants each year, was another feather in the new business’ cap, but Brad and Johnny had an exceptionally strong case to make on Stumpies’ behalf. By locating in eastern North Carolina, the two Marines were right next to Marine Corps Base Camp Lejeune near Swansboro and its five satellite facilities nearby, including Marine Corps Air Station New River. The latest available count shows that more than 211,000 Marines, as well as personnel from other U.S. armed forces, reside in the area. Just a few miles away, Fort Bragg and Seymour Johnson Air Force Base are home for thousands of additional potential customers. Graduation from the program has enabled Stumpies to move forward carefully and sensibly.

“As Marines, Brad and Johnny like tried-and-true military firearm designs, including Springfield 1903-A4 rifles equipped with scopes and used during World War II for sniping and other high-accuracy shooting…”

They operate today in a new storefront with an 07 FFL to make firearms and sell suppressors and short-barrel rifles (SBRs) to qualified customers. They’ll also soon be qualified to manufacture NFA firearms. Stumpies offers a surprisingly wide variety of services, including sales of firearms, ammunition and accessories, custom ammo loading, comprehensive gunsmithing services, Parkerizing and firearm painting, repair and modification of components and installation of custom parts and soon, custom-built ARs under their own brand.

Stumpies also adapts firearms for disabled customers. In fact, the company’s motto is “We can’t run, but we can shoot!” A central motivation and a personal mission for both Johnny and Brad is enabling the disabled, both vets and civilians, to enjoy shooting sports. Brad and Johnny can modify virtually any firearm, shotgun, rifle or handgun to optimize its use by anyone, and they are eager to encourage new shooters or help others relearn old skills.

As Marines, Brad and Johnny like tried-and-true military firearm designs, including Springfield 1903-A4 rifles equipped with scopes and used during World War II for sniping and other high-accuracy shooting. They’ve restored several ’03s and used them in vintage sniper competitions. They also share affection for the classic 1911. Brad built an Officer’s Model 1911 with a Caspian frame for his wife. 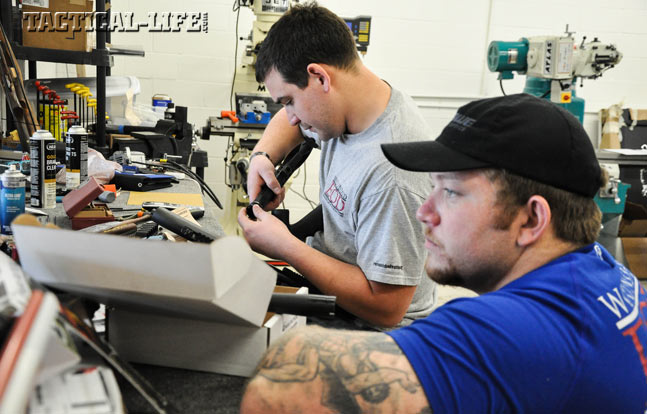 Stumpies’ founders are as positive and upbeat about their business prospects as they are about their personal lives and recoveries from tragedy. Their retail store includes a gunsmithing facility and machine shop for fabricating the custom firearms and components. They also will continue to focus on custom modifications for disabled customers.

“Johnny and I did our best to serve our warfighting brothers by protecting them from IEDs,” Brad explained. “We want to meet our current and new customers’ needs with the best possible products and services available today.”

Surprisingly, the 60 Minutes episode created a problem for the entrepreneurs. They have been inundated with calls, emails and other requests from all over, creating many hours of extra work. However, the staff at Stumpies will respond to every inquiry. “We cannot express our thanks and most sincere gratitude enough,” said Johnny. That means the promising business plan Brad and Johnny developed and honed with help from the EBV program may lead to a truly national business. For more information, visit stumpiescustomguns.com or call 910-617-7723.