The 6.5 Creedmoor has become one of the most popular rounds for long-range competition and hunting. If you’re ready to give it a try, H-S Precision is a great place to start.

It’s no secret that I’m a big fan of the 6.5 Creedmoor. Over the past few years, I’ve spent some serious quality time behind rifles chambered for this long-range cartridge. There are so many things to like about the 6.5 Creedmoor that it is a wonder it has not caught on even more than it already has. But I’m sure that will likely change with time.

Some of the best 6.5 Creedmoor ammo comes from Hornady, with A-MAX, GMX and newer ELD (Extreme Low Drag) rounds that offer excellent ballistics at distance. The company’s 129-grain InterBond provides a round that offers similar performance to the barrier round most commonly used in law enforcement today. For a police agency or just someone who does not want to reload, this covers the 6.5 Creedmoor spectrum pretty well. And although I haven’t had a chance to try it yet, Federal Premium recently unveiled its new 140-grain Fusion ammo. If your rifle pulls double duty on big game, the Fusion line is definitely worth considering.

I recently wanted a new 6.5 Creedmoor rifle that could work for tactical deployments and also compete in a tournament hosted by Dave Lauck with factory-loaded match-grade ammunition. Dave’s competition requires your partner to use a carbine alongside your bolt action, and he doesn’t limit your caliber. Luckily, my DMR was already chambered for the 6.5 Creedmoor—a round that, introduced in 2007, was designed to work well in both bolt actions and semi-automatics thanks to its shorter overall length. So who would build my 6.5 Creedmoor bolt rifle?

When it comes to bolt-action precision rifles, it’s hard to beat H-S Precision. The company’s Pro Series 2000 rifles have been considered some of the best precision rifles on the market for years, and H-S Precision is one of the few rifle manufacturers that builds virtually ever part of its rifles in-house, too, including its own barrels. H-S Precision stocks are used by many larger manufacturers as well as custom builders. As for complete rifles, the company’s builds have proven to be so accurate and reliable that they’re currently in use with the FBI and Israel Defense Forces, or IDF.

I chose the H-S Precision Heavy Tactical Rifle (HTR), one of the company’s most proven tactical designs, for my build. The rifle starts with a Pro Series 2000 action featuring a tactical bolt knob as well as a three-position safety. It’s also a push-feed action, which allows for fast single-feeding if needed. The trigger is a very crisp unit set to 3 pounds at my request. This is about the lightest pull weight I’ll use, and it’s become the standard for all of my precision rifles.

Given the versatile nature of this rifle, I chose a 26-inch, non-fluted, cut-rifled barrel chambered for the 6.5 Creedmoor. While fluting is available, I wasn’t concerned with the rifle’s overall weight, and I was certain I’d end up using an over-the-barrel suppressor in the near future.

The barreled action was installed in a composite stock with a full-length aluminum bedding block for enhanced repeatability. The stock is adjustable for both length of pull and cheek height, which makes it easy to find the perfect fit behind the rifle in the field. I ordered the stock in OD green with black webbing for a bit of camouflage. The rest of the rifle is matte black to reduce glare.

In order to facilitate mounting scopes as well as night-vision devices, the rifle has a long top rail with a 20-MOA offset for long-distance optics. My SWAT team deploys with night vision, so this is a big bonus for the rifle. Shorter side rails were also included for adding lights, lasers or other accessories that might be required.

My rifle came with one 5-round magazine as well as two 10-rounders. The magazines came with special rubber coatings on the bottom that protect them from damage and make them easier to grasp in cold, wet or muddy conditions.

I added a Harris bipod as well as a Hensoldt ZF 3-12x56mm scope with an illuminated, first-focal-plane, mil-dot reticle. The elevation and windage turrets are large, easy to read and easy to adjust in 0.10-mil increments. The elevation knob is reversed from those generally seen in the United States. In order to increase elevation, you turn the scope clockwise. Resetting the knobs is easy, and the glass is simply the best that can be had in a riflescope. It is crystal clear and uses Zeiss T-coatings, providing excellent low-light transmission as well as superb image quality. I used a set of Badger Ordnance rings to mount the scope on the rifle’s top rail.

I tested the H-S Precision HTR on the range with two factory Hornady loads as well as two hand-loads. Hornady’s 140-grain A-MAX ammo has proven to be incredibly accurate in my other 6.5 Creedmoor rifles, with most groups right around 0.25 inches. You can’t get much more accurate than that. With the HTR, the best group with the 140-grain Hornady A-MAX ammo was 0.26 inches on a day with weather that wasn’t very conducive to group shooting. This is the third rifle I’ve tested to produce this kind of accuracy with Hornady’s 140-grain A-MAX, so you know this ammunition is truly consistent. Shooting the HTR at 300 yards, the largest group was 1.25 inches, and given better conditions, I believe my groups would have been even tighter.

H-S Precision has done an excellent job with this stock’s ergonomics. You can adjust the length of pull and cheek height without any tools. Once adjusted, the cheekpiece and buttpad stayed in place through the entire evaluation. I used to avoid adjustable stocks because of their loose features, but this rock-solid stock has really changed my opinion.

After breaking the rifle in, the bolt was very smooth and the three-position safety worked without an issue. This rifle makes it easy to see why push-feed actions are so prized by many police agencies—they’re safe and easy to use. The bolt knob was easy to grasp during testing, and the lift pressure was just about correct. The trigger was crisp right from the start and remained that way throughout the entire evaluation.

All of the supplied magazines worked well, and the rubber coating on the bottom was excellent. I made several runs using the rifle with gloved hands, and the magazines did not slip like others.

Each magazine loaded positively and ejected with a press of the magazine release at the front of the triggerguard. Some prefer the release to be outside the triggerguard, but honestly, this is not a speed-loading beast. This setup allows you to easily release the magazine without losing your control-hand grip and operates essentially like an M1A safety.

I tested the HTR with and without a sound suppressor. This caliber is pretty quiet without a silencer, and if you add a suppressor, you’ll have to double-check to make sure the gun actually fired. That’s how quiet it is. I used a Jet suppressor in 6.5mm from Mike’s Gun Sales & Service. This is a simple, lightweight, titanium model that threads on easily without affecting the rifle’s balance. While this made the rifle rather long in off-hand and unsupported positions, the HTR handled well and ran without a hitch. 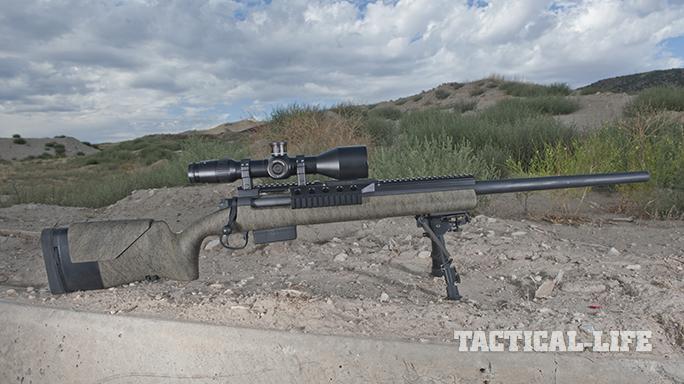 I spent the rest of the gun test using the H-S Precision HTR as I would in actual deployment conditions. This meant using the rifle on, in and around my truck. It carries well in a bag and deployed easily. Although I didn’t have the chance to test the rifle at night, an AN/PVS-24 fit securely on the top rail. I also used some 140-grain SST rounds that showed great promise, performing side-by-side with my department’s AccuBond duty round.

The 6.5 Creedmoor is very effective at truly long distances, reaching out to well beyond 1,000 yards. Yet it’s still capable at closer distances without much overpenetration. Its recoil is almost nonexistent, it uses standard .308 Winchester magazines and it’s amazingly accurate. What more could you want? This H-S Precision HTR is great option for any police or competitive uses, and it turned out to be a perfect partner for this chambering. I for one am a big fan of both H-S Precision and the 6.5 Creedmoor, and that certainly won’t be changing any time soon.

This article was originally published in “Tactical Weapons” February/March 2017. To order a copy, visit outdoorgroupstore.com.