3
SHARES
23
VIEWS
Share on FacebookShare on Twitter
A .50 BMG rifle is an essential law enforcement tool, and the Halo Maximus has some unique features that set it apart from most other .50 BMG rifles. The Maximus is manufactured almost entirely of aluminum alloy and steel, which comprises the barrel, receiver, bolt, fire control components and a few other elements.

When police special tactical units are evaluated by the Department of Homeland Security, the presence or absence of a .50 BMG (Browning Machine Gun) caliber precision rifle is a critical rating factor. While a .50 BMG caliber rifle may seem to be overkill in an urban or even rural environment, there are scenarios in both environments when nothing else will do. Subjects barricaded behind barriers that are impervious to smaller caliber firearms can be defeated with a .50 caliber rifle. For instance, situations where terrorists have taken over the cockpit of an airliner can be alleviated only by using a .50 caliber rifle, since the windscreens of commercial jet aircraft are designed to resist impacts much like those of smaller caliber rifle bullets. In facilities where bullet-resistant glass is present, such as banks, only a .50 BMG caliber rifle can eliminate threats. Thus, while some might consider a .50 BMG rifle unnecessary in law enforcement, the opposite is true. A .50 BMG rifle is an essential law enforcement tool. Although situations calling for a .50 BMG caliber rifle are relatively rare, when a situation occurs where a .50 BMG caliber rifle is necessary, it is too late to have a SWAT team precision tactical marksman qualified in the use of the big rifle. Unlike the famous LA Shootout where officers borrowed semi-automatic small caliber rifles from sporting goods stores, .50 BMG rifles aren’t very common, even in gun stores. In addition, if a situation arises where a .50 BMG rifle is to be employed, the responsible team member must be thoroughly qualified to use it and must maintain his proficiency so that when the worst happens, the team .50 BMG rifle can be employed without fear of legal repercussions due to training or proficiency issues. 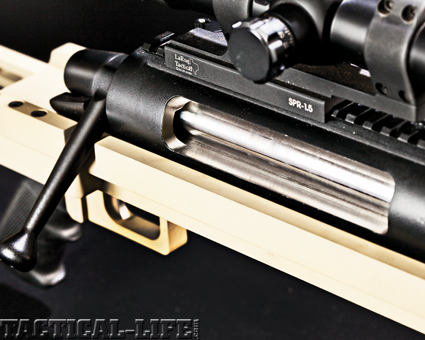 The Halo Maximus uses a BAT Machine receiver and locks via two massive lugs at the front, spaced opposite from each other. The bolt handle can be considered as safety lug, and the Maximus’ bolt operation was butter-smooth right from the box.

Because a firearm without ammunition is no more than a very expensive club, this is another factor in the use of a .50 BMG rifle since ammunition of various types has decidedly different characteristics. All .50 BMG ammunition is capable of defeating targets that would withstand even the most potent bullets of smaller calibers, but the team leader must choose his ammunition with just as much care as he did the team rifle. Commonly available .50 BMG ammunition includes M2 and M33 ball, M2 armor-piercing (AP), M8 armor-piercing incendiary (API), armor-piercing match from Anthena and plain commercial match ammunition. Mark 211 API is also available to law enforcement, but this most potent API has behind target incendiary effects that probably aren’t desirable for law enforcement purposes. Of commercially available US military ammo, M8 API is generally considered to be the most accurate, although if used operationally, the incendiary effect must be taken into consideration. The Army has begun purchasing a match-grade round for its M107 rifles. This round is currently designated the XM1022 and is made by Lake City Army Ammunition Plant. The design is similar of the Anthena armor piercing ammunition tested herein, but without the armor-piercing penetrator. I recommend match-grade ammunition that will defeat hard targets. For tough targets, Anthena AP match ammunition imported by Drake Associates probably represents the best balance of accuracy and terminal effects, although it is expensive. I have fired Anthena AP Match bullets against inch-thick armor steel at 300 meters distance and not only did every round penetrate with enough behind armor effect to be lethal, the three-round groups we fired could be covered with the palm of our hand. In one group, two rounds were actually touching. The Anthena AP has been ordered in large quantities (over 5,000 rounds) by a major U.S. police department for harbor protection and is in use by several federal law enforcement agencies. 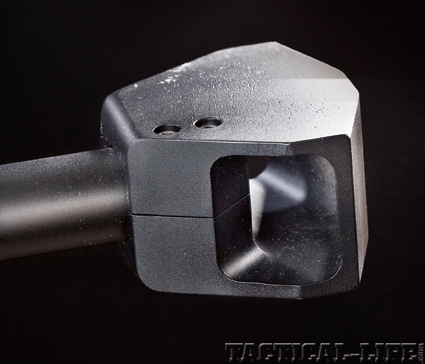 The Halo Maximus’ weight is one factor that contributes to the lack of felt recoil, but more important is the rifle’s aggressive muzzle brake, which counters recoil by essentially pulling the rifle forward as the bullet leaves the muzzle.

Gun Details
When it comes to rifles suitable for law enforcement use against hard targets, the selection is limited. One of these is the Halo Arms Maximus, which is a large rifle—but when dealing with a cartridge that launches a half-inch diameter bullet weighing as much as 750 grains at nearly 3,000 feet per second (fps), the rifle that shoots it is also going to be big—and heavy. The Maximus is nearly 5 feet in length with a standard 30-inch chrome molybdenum steel barrel. A carbine version with 22-inch barrel is also available.