by Bob Arganbright
in Guns, Handguns
0

In case you’re unfamiliar with the term, a “belly gun” is a handgun with a very short barrel and often without a front sight. They are meant for close-range gunfights and are called belly guns because one may press the muzzle against his opponent’s belly before firing a shot. So, let’s examine a baker’s dozen of such handguns—for you young whippersnappers, a baker’s dozen is 13. 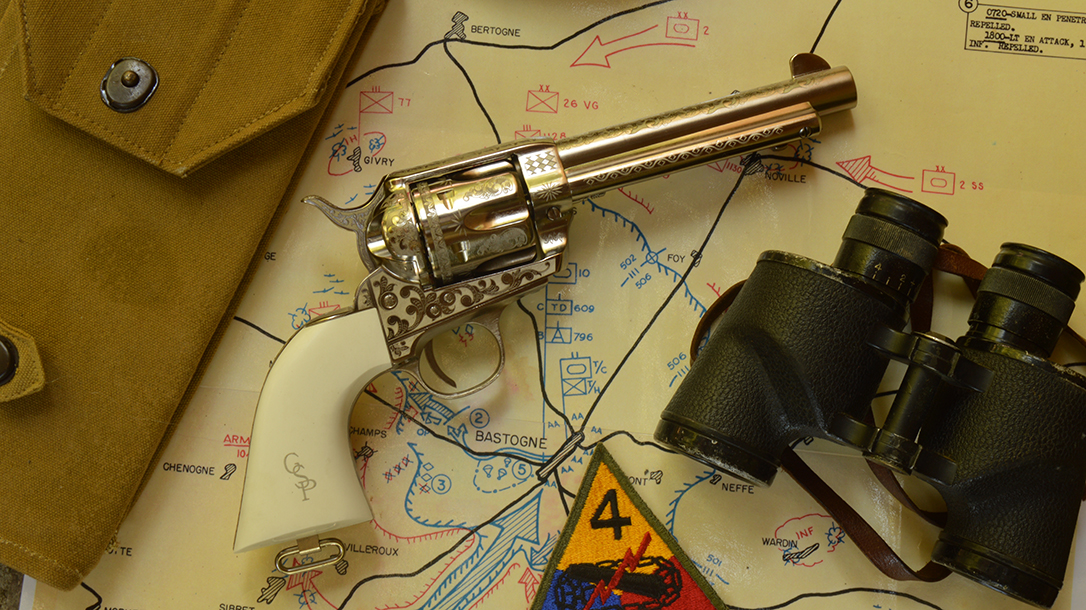 The percussion single-shot Derringer became a legend in April of 1865 when John Wilkes Booth used one to assassinate President Abraham Lincoln. Originally designed by Henry Deringer, spelled with one “r,” they were quickly copied by many makers and were commonly known as Derringers. The Derringer was a small, concealable, percussion side lock single-shot pistol, usually .41-caliber, with a bird’s head grip. Gamblers used them, often carried in pairs, during the Gold Rush.

George Gillespie of New York City manufactured my single-barrel Derringer, and the lock plate includes the stamping “GILLESPIE.” The top of the 2¾-inch barrel is also stamped “GILLESPIE” over “WARRANTED” and “CAST STEEL.” The small pistol, which measures 6¼ inches in overall length, has no serial number. The breech end of the barrel, the sideplate and the German silver triggerguard are nicely engraved. This is an excellent example of the classic Derringer.

While several firearms manufacturers produced cartridge Derringers, undoubtedly the most popular was the Remington Double Derringer, with over 150,000 being produced between 1866 and 1932. The Double Derringer has stacked 3-inch barrels and a bird’s head grip, measures 4.9 inches in overall length, and the bulk was reduced by replacing the usual triggerguard with a spur trigger.

Colt’s 1862 Police SA was an improved 1849 Pocket model, using the same frame and grip frame size. It appears to be a miniature 1860 Army with its rebated cylinder and streamlined barrel and loading lever. Rebating the cylinder allowed it to be a five-shot .36 caliber. With a stock 4-inch barrel, it was easily carried in a pocket.

My 1862 Police SA is a fascinating example of a true belly gun. Of standard factory configuration originally with blue finish, brass grip frame and walnut grips, the barrel has been shortened to 3-5/16 inches with a brass pin front sight and the loading lever assembly discarded. The bottom flat of the backstrap is lightly marked “LT BFB,” which research indicates was Lt. Benjamin F. Butler, Company D, Minnesota 3rd Infantry 3rd Brigade. He fought in the Civil War battles of Wood Lake, Yellow Medicina, Bayou Fourche, Fitzhugh’s Woods and the Siege of Vicksburg. This soldier’s backup gun was produced in 1863, right in the middle of the Civil War.

Dallas Stoudenmire was a legendary gunfighter. A former Texas Ranger, Stoudenmire was city marshal of El Paso, Texas, in 1881, and became famous for the “four dead in five seconds gunfight” where he killed three men with three shots. One of his documented handguns was a Colt Richards-Mason .44 cartridge conversion, which was modified to belly-gun length by shortening the sightless barrel to 2-9/10 inches and discarding the ejector assembly.

I obtained an Uberti copy of the Richards-Mason .44 and modified it like Stoudenmire’s. While cataloged as a .44 Colt caliber, it chambers and fires .44 Special Cowboy loads with no problems. Ironically, Stoudenmire lost his last gunfight to someone using a Colt Single Action Army (SAA) belly gun.

Many folks modified Colt SAA revolvers into belly guns. In fact, I have four originals and one replica. At the 2017 Colt Collectors Association show, I purchased a U.S. Colt SAA marked with serial number 220, the first year of production and in the first shipment to the U.S. government. While it still has the features of the very early SAA revolvers, such as shallow cylinder-locking notches and no leads, it has been modified to a belly gun.

The 7½-inch barrel has been cut back to 1-15/16-inches and professionally crowned with no front sight. The boss on the frame for the ejector housing has been removed. All numbers match except the backstrap, which is in the 38,000 range. The one-piece walnut grips appear to be original to the backstrap. The frame has the correct two-line patent date marking and small “U.S.” stamp, while the barrel and cylinder have the correct “P” and “A” stamps for proofed and inspected by Ainsworth. Of special interest to me when I disassembled the number 220 was that I found the backstrap stamped “20 CEN FOX,” indicating the movie studio. This 1873 Colt had made its way from U.S. issue to end up a Hollywood prop gun.

Back in the Old West, Bass Outlaw was an enigma: a brave and respected Texas Ranger when sober and a raving maniac when drunk. Fired from the Rangers for drinking on the job, Outlaw was immediately hired as a deputy U.S. marshal. In a drunken rage at an El Paso bordello, he shot and killed a fellow Ranger. John Selman, soon to be famous as the killer of John Wesley Hardin, arrived first and shot Outlaw in the chest. Mortally wounded, Outlaw returned fire, wounding Selman in the leg. This was remarkable shooting, considering Outlaw was using a triggerless and sightless SA belly gun.

Wanting a replica of Outlaw’s gun, I purchased the basic .44-40 SA with 1860 Army grip frame from EMF Company, cut the barrel to 3 inches and left it without a front sight. A machinist friend made a long-headed cylinder pin as used by Outlaw. I removed most of the triggerguard and the ejector housing boss from the frame. Except for retaining the trigger, which Outlaw had discarded, this gun now resembled his custom SA belly gun.

What first caught my attention about my next belly gun, a Colt SA Black Powder model produced in 1882, was the custom holster which came with it. This holster is a Berns-Martin break-front “Speed” holster made specially for this 2-1/8-inch-barreled Colt .44. Designed by John Berns and patented in 1935, the Speed holster was hand-made by Jack Martin and was designed to securely carry a 7½-inch barrel Colt SA high on the hip while walking in deep snow. They soon became popular with police officers and FBI agents.

The Colt belly gun that came in it has the barrel cut back with a front sight; the frame is unmodified. For some reason, the entire grip frame was replaced with a brass grip frame and one-piece walnut grips from a Colt 1851 Navy. Colt SA authority Bob “Arizona Thumber” James believes it was to attract attention to the holstered gun, which is entirely enclosed except for hammer spur and grip. This lends credence to the story that this Colt belly gun was carried by an early Las Vegas casino security guard.

Colt produced my last SA belly gun, a Black Powder model, in 1878. It has a Sherriff Model frame (no ejector housing boss) and a 2½-inch barrel. The front sight is an early full-length ramp style from pre-WWII. As with the Bass Outlaw six shooter, the entire grip frame has been replaced with one from an 1860 Army Colt with one-piece walnut grips. This little .45 came in one of S.D. Myres’ rare fully hand-carved and calfskin-lined Threepersons holsters.

In 1877, Colt introduced its first double action (DA) revolver, commonly called the Lightning. Standard calibers were .38 Colt and .41 Colt. Except for the bird’s head grip, it appears to be a small SAA. Ejectorless “Store Keeper” models had standard barrels as short as 3½ inches.

My Lightning belly gun has a three-digit serial number from the first year of production. It is chambered in .38 Colt, has the “Store Keeper” frame and a sightless barrel cut back to 1¾ inches. The hammer spur has been removed so it wont snag in a pocket, and the action has been modified to DA only. It still has the correct long-headed cylinder pin that may be used to punch out a sticky cartridge case. This is a very early perfect pocket pistol.

In 1878, Colt introduced a large-frame DA revolver. The barrel, cylinder pin and ejector assembly were identical to the same parts on a SAA revolver. The 1878 DA had a bird’s head grip and loaded through a flat loading gate with the hammer on half-cock.
At a recent gun show, I purchased a poorly-modified 1878 DA. The pistol sports a barrel and ejector assembly shortened to 4 inches with the worst front sight I have ever seen. Also, the action didn’t function correctly. It had very little value, so I decided to have some fun with it.

First, I cut the barrel back to 2 inches without a front sight. I removed the hammer spur and modified the action for DA only, which fixed the action problems. I carefully hand-filed the sides of the frame to remove deep pits and lightly browned all parts for an aged look. Finally, I installed a set of vintage ivory grips. This DA belly gun now functions well enough that I have fired shotgun-primer-powered wax bullets through it. 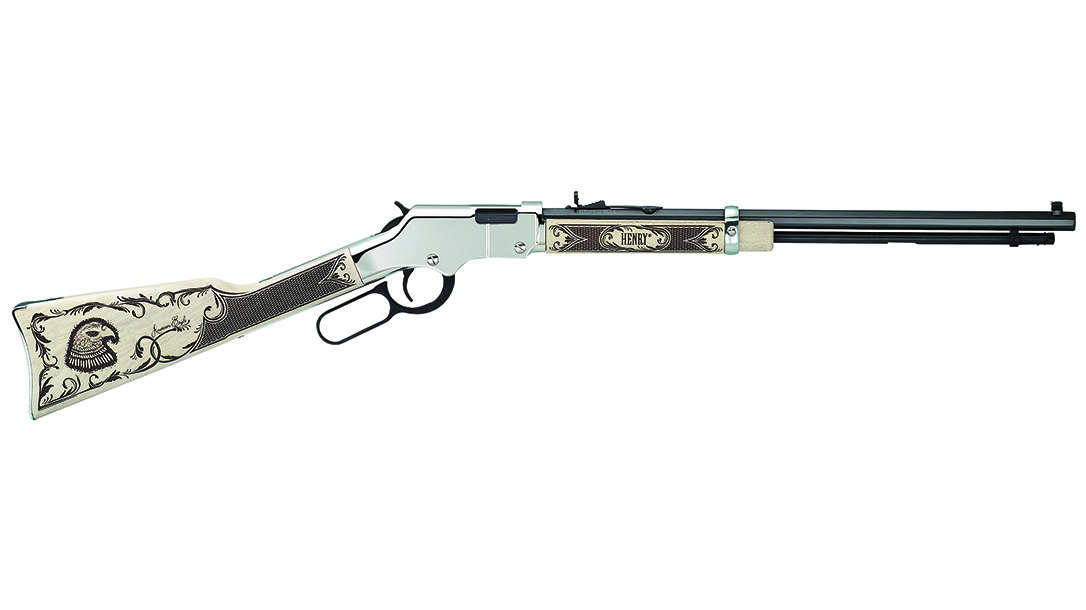 Merwin, Hulbert & Company of New York City marketed high-quality SA and DA revolvers of a unique design manufactured by Hopkins and Allen. Additionally, the revolvers loaded through a sliding loading gate on the right side of the frame. To unload, the barrel rotated 90 degrees to the side and slid forward, taking the cylinder with it. The breech face captured the cartridge rims, so fired cases dropped free. Any unfired rounds were too long and remained in place. This selective ejection was unique to the Merwin Hulbert revolvers.

My next belly gun is a 4th Model Pocket revolver chambered for .38 Merwin Hulbert. Moreover, this DA belly gun has a factory 2¾-inch barrel with half-moon blade front sight, a bird’s head “skull crusher” grip, an unusual folding hammer spur and, as with most Merwin Hulbert revolvers, it’s nickel plated. This unique belly gun measures 7 inches in overall length and could easily be carried in a pocket.

This brings us to the last of our baker’s dozen, an early Colt Detective Special .38 that has been “Fitzed.” J.H. FitzGerald was a pre-WWII exhibition shooter and ballistician for Colt. Further, he modified his personal Colt DA revolvers by shortening the barrels to 2 inches, removing the hammer spurs and cutting away the front of the triggerguards. All such revolvers are Fitz Specials.

Hoping this might be a factory-modified Fitz Special, I obtained a factory letter. Unfortunately, my Detective Special is a modified Police Positive Special, which left the factory in 1915 as a 4-inch .32-20. Also, at some point it was converted to a 2-inch-barreled Detective Special .38 using factory parts. Finally, the cylinder face features a five-point star stamping, which I hope is a factory rework mark.

And there you have it: my baker’s dozen belly guns. If only they could talk.