A lot of Old West mythology surrounds handguns and the speed with which they could be drawn and accurately fired. This is especially true of large-caliber percussion pistols like the Colt Walker and Dragoons in the 1840s and 1850s. These were the guns Samuel Colt needed to build to get government contracts (the order for 1,000 Walkers resurrected his gun-making career in 1847), but there were also guns that he loved to build, mostly pocket models. He was a passionate believer in small-caliber pistols that could be easily carried in a waistband or pocket, and quickly drawn and fired at close range. Today we call them “belly guns.”

The original 1830s Colt Paterson Pocket or “Baby” Paterson and slightly larger Belt Models were small, .28-caliber, five-shot pistols with 2½- to 4-5/8-inch barrels—guns best suited for short-range encounters. With the success of his new Colt’s Patent Firearms Manufacturing Company, he raised the stakes in 1848. On the heels of the massive 1847 Walker and .44-caliber First Model Dragoons, he went back to his Paterson roots and his passion for small personal-defense pistols. The first new Colt model was the .31-caliber Baby Dragoon Pocket followed by the 1849 Pocket Model, the latter being the single most successful Colt percussion pistol ever produced. More than 331,000 were sold from 1850 to 1873. 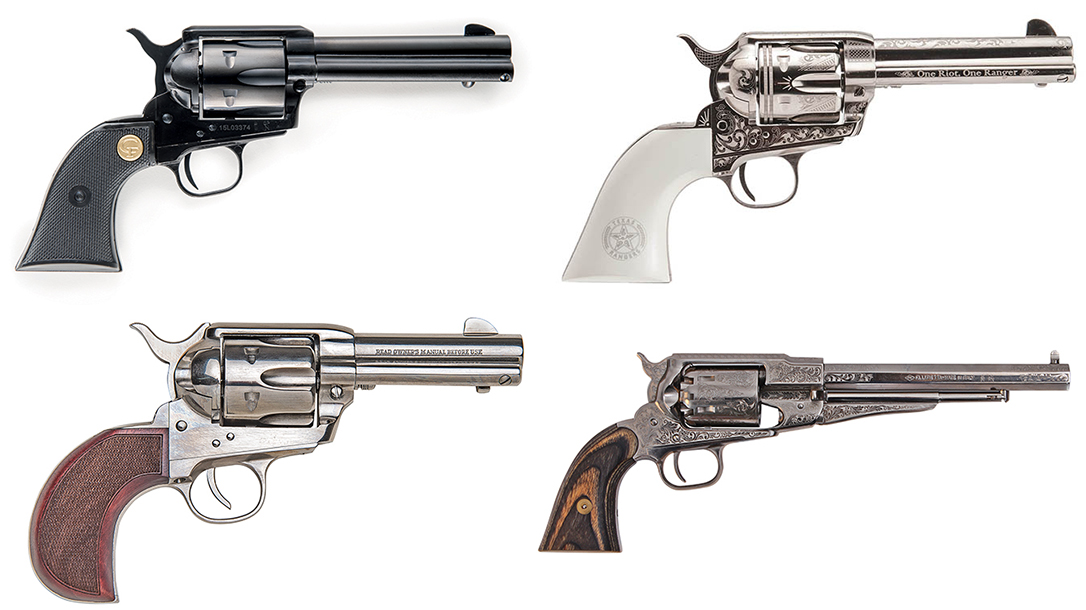 The Model 1849 was offered with a loading lever, its principal improvement over the Model 1848, along with the option of either a five- or six-shot cylinder. The shortest barrel length offered was 3 inches. The diminutive pocket pistol weighed a little less than a pound and a half. The smallest Model 1849, dubbed the “Wells Fargo,” was an ounce or so lighter because it did away with the loading lever. This made the pistol no faster to reload than the 1848, but like the earlier model, easier to carry and draw from a waistband or coat pocket.

The Model 1849 filled the market handily for more than a decade, but shortly into the Civil War, Colt added another but rarer pocket pistol, a snub-nose version of the .36-caliber Model 1862 Police. This was a special-order, 2-inch-barreled version with a re-contoured and plugged barrel lug and no loading lever. The guns were also often fitted with dovetailed front sight blades. The exact number produced is unknown, but according to estimations, no more than 50 were built. Some of the men who ordered and carried them are infamous, however.

In its design, the special-order Police Model laid the groundwork for other snub-nose Colt designs that followed throughout the remainder of the century. It could be regarded as the cap-and-ball predecessor to the centerfire Colt Pocket Positive, introduced in 1905, the Colt Detective Special circa 1927 and the Banker’s Special circa 1928. But there were some interesting steps in between the 19th century single-action and early 20th century double-action models, with a handful of snub-nose pistols almost as rare as the 1862 Police.

The 1860 Army was essentially the big .44-caliber brother to the .36-caliber Police Model. And like the Police, a number of Army revolvers were modified with cut-down barrels and lugs re-contoured like the snub-nose Police. There are no factory records of Colt having made snub-nose Model 1860s (there were records of the 1862 Police, however), so it is believed that all known specimens were field conversions by gunsmiths for individual customers. There were several common variations, most with 2½-inch barrels and full-sized grips, others with 2- to 2½-inch barrels, re-contoured backstraps and rounded grips (similar to those that would be seen on the double-action Colt Model 1877 Lightning) to make the powerful little belly guns even more concealable.

Belly guns continued into the early 1870s with a handful of snub-nose models made from Richards-Mason 1860 Army cartridge conversions, the most famous of which was carried by El Paso, Texas, City Marshal Dallas Stoudenmire. He was also the deputy U.S. marshal for the southern district of Texas and a former Texas Ranger, thereby giving him almost unlimited jurisdiction and unlimited enemies.

He carried a 2-7/8-inch-barreled, .44 Colt Richards-Mason 1860 Army conversion butt-forward in his left trouser pocket and a .44-caliber Smith & Wesson top-break with an 8-inch barrel down his right-hand pocket. The pockets had leather linings to keep his pistols secure. The short gun was for close-in work, and the S&W was for longer distances. Stoudenmire literally died with the snub-nose Colt in his hand when he was shot from behind during a gunfight on September 18, 1882.

The popularity of snub-nose cartridge conversion models was not lost on Colt, either, which first picked up the idea for the Peacemaker in the same year that Stoudenmire was killed. Colt introduced its first “Sheriff’s Model” Single Action Army with a 2½-inch barrel and no ejector. It was a one-off design on special order, but in 1888 the short 3½-inch-barreled Sheriff’s Model was added as a standard production gun.

Of course, shorter barrel lengths had already been available as a special order—as short as 2 inches in length. One such gun with a few added modifications was carried by former Texas Ranger and Deputy U.S. Marshal Sebastian Lamar “Bass” Outlaw. Like Stoudenmire, he too died with that gun in his hand during a shootout on April 5, 1894, with El Paso Constable John Selman Sr. It seems those who died with snub-nose revolvers in their hands are better remembered than those who lived, but the belly guns I’ve mentioned here have earned their place in Western history.

With all things being considered equal, as in an average barrel length between 2 and 3 inches, differences in calibers from .31 to .44, and cap-and-ball designs versus metallic cartridges, the five snub-nose revolvers shown here are all considered belly guns. To find out which was most accurate in a close encounter, I fired each one off-hand at 7 yards, which is actually much further than the gunfights in which Stoudenmire and Outlaw were killed. 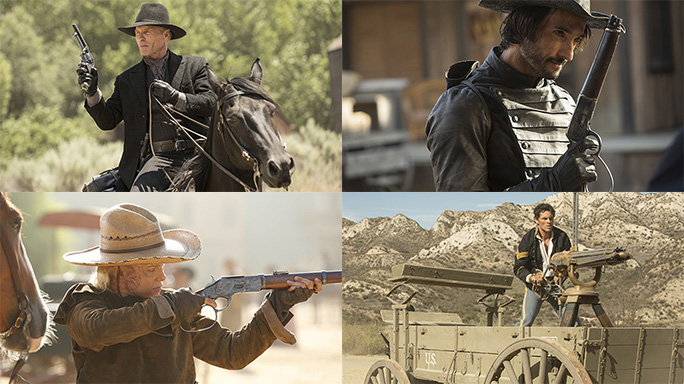 A .31-caliber lead ball fired from the Colt Model 1849 would have hit a man squarely in the chest at that distance, and depending upon the powder charge and the amount of clothing the ball encountered, it would have done serious if not fatal damage. Step up to a .36-caliber pistol with a 2-inch barrel, and again at 7 yards you would not have missed your mark with a carefully aimed shot. Would either a .31- or .36-caliber round ball be a fight-stopper back in the Old West? If not, it would certainly have given one man an edge over the other.

The game-changer is the .44-caliber lead ball, a rifle-sized round fired from a 2-inch-barreled pistol. It wouldn’t have a lot of velocity, but it would hit hard; a well-placed shot would probably end the fight. Wild Bill Hickok ended many a confrontation with a .36-caliber round ball from his brace of 7½-inch-barreled 1851 Navy revolvers. Only later in life did he carry metallic-cartridge conversions in .38 and .44 caliber (along with a .32 rimfire S&W top-break) just briefly before he was murdered in Deadwood.

I shot the .44-caliber 1860 Army against the copy of the Stoudenmire .44 Colt Richards-Mason conversion at 7 yards. The cut-down 1860 Army, with its brass blade front sight, was far more accurate, placing a .44-caliber lead ball in the 10 ring of a B-27 silhouette target at 8 o’clock, near the point of aim. The copy of the Stoudenmire .44 Colt conversion without a front sight and a 2-7/8-inch barrel shot high and put a round into the 8 ring at 11 o’clock. I then tried the copy of the Bass Outlaw gun with a 2-inch barrel and no front sight, which was a serious deficit at 7 yards. The .45 proved to be the least accurate at that range when trying to aim. It is really a better gun for confrontations around 10 feet and fired instructively from the waist, much as men like Bass Outlaw would have done in a tight situation.

The bottom line? These small-caliber belly guns hit the target pretty well because they have front sights. And there’s probably a good reason so many 1860 Army models with cut-down barrels had the front sights remounted, and so few Richards-Mason Army conversions were built without front sights like the Stoudenmire gun. As for Peacemakers, Colt got it right with the Sheriff’s Models, and Bass Outlaw and others who tried to strip the Single Action Army down to a mere 2 inches probably found it better suited to shooting at arm’s length. After all, that’s why these were called belly guns.