These days, there are a number of pistols well suited to personal defense, concealed carry and even duty use. There are dozens of pistols to fit any need or preference. Manufacturers are turning out simple and effective weapons built to tolerances only dreamed of a short while ago.

But for all of that availability, few are able to fill the role of an issued duty pistol. Even those suitable for an individual officer may not meet the needs of an entire police department. Just because the marketing trend may be to bridge the gap between law enforcement and civilian use, the reality is not necessarily true. The fact is, just because a pistol may work for a police officer does not mean it is suited for the entire department’s standard-issue weapon.

There are issues police department armorers deal with that an individual may not. Most officers are not “gun people” and have never held a pistol until they reach the academy. Generally, they shoot their issued pistol when required, cleaning it on occasion. Every aspect short of passing a uniform inspection will be performed by the armorer. Having 100 officers with 30 different pistols makes maintenance a logistical nightmare. With thousands of officers, it’s just not possible. Issued pistols must be simple, easy to maintain and as reliable as possible given minimal attention. Being as close to “tool-less” as possible helps with a service life measured in years.

Department armorers are seldom “gunsmiths.” They replace parts on occasion but mostly keep their guns running. Department pistols need to fit different hands with minimal fuss. And one gun may be issued to several officers over its lifetime. Replaceable frames, grip panels and the like make that easier. Their triggers need to be usable, not tunable, with moderate trigger weights and predictable resets. The sights should be robust and easy to see. Duty pistols typically spend their entire shifts open to the elements, making resistance to harsh conditions absolutely critical.

Practical accuracy is also critical. These are tools made for defending life—not hitting targets or winning competitions. If the gun shoots inside 4 inches at 25 yards under a variety of conditions, it’s fine—anything more than that is gravy. Finally, duty-ready pistols need to be cost effective. Most agencies need pistols in the $500 range with three magazines and night sights (if required by policy). Beretta has entered this market with a strong contender, the 9mm APX.

The Beretta APX was introduced at this year’s Beretta Tactical Summit with the help of John Chapman, the cofounder of Forge Tactical. He has an extensive law enforcement background including decades of training. Having attended his training courses, I can tell you that he is all business, with a no-nonsense attitude and laser-like focus on practical application. His input was a big part of the Beretta APX.

John stressed how this pistol was designed for harsh use. As Beretta’s entrant into the U.S. Army‘s Modular Handgun System (MHS) program, it was designed for combat, making it simple and functional. To that end, it’s Beretta’s first striker-fired pistol.

The Beretta APX’s polymer grip frame utilizes interchangeable backstraps. Three different backstraps come with the gun. Within the frame is a serialized chassis that holds the fire control group. Users can simply remove this part and switch it among various frames. (Green, gray and tan frames are available along with the standard black models.) The frame also features an extended beavertail, which helps protect your hand from “slide bite” and helps lower the bore axis. The dust cover also boasts a true Picatinny rail for mounting accessories like lights and lasers.

A unique touch, the steel slide features wide grooves along its entire length for easy racking. The grooves should be wide enough to grip most users’ fingers. The slide is also fitted with three-dot sights, though tritium units are available. My test pistol came with the standard sights, and the rear unit provides a ledge for one-handed racking in an emergency. Within the slide is a 4.25-inch barrel.

As for controls, the magazine release is reversible and easy to access while the slide release is ambidextrous. The trigger breaks at 6 pounds, and it’s flat and wide with a tactile and predictable reset. Also, Beretta designed the APX so it’s easy to disassemble safely—you just have to press the striker deactivator on the right side before taking the pistol down like most other polymer-framed strikers.

The Beretta APX’s 17-round magazines are made of metal and sport large plastic baseplates that make it easy to reload should a magazine hang up in the mag well. Each magazine also has witness holes at the rear that show you how many rounds are on board. My test gun came with two magazines.

Our range time at O’Gara Training in Virginia was extensive as far as these events go, and we were able to get some solid time on the pistol. John Chapman conducted most of the training and stressed many of the Beretta APX’s features, pointing out how it was suited to department use. The aggressive slide cuts facilitate pulling the slide to the rear when needed, but using the slide stop is encouraged. The magazines can be checked after insertion by pulling on their ledges, yet they still fit flush with the grip.

During the event, John also encouraged us to run the pistols hard. Afterwards, I noted a few things. The trigger is about as good it gets for this kind of gun, and it’s practical for an issued pistol. Once the now-ubiquitous trigger safety paddle is depressed, the trigger offers a clean break. It was easy to be fast and accurate—sometimes both at the same time. The recoil is pretty light due to the bore axis. The sights are also easy to pick up, and the gun ran well. The largest backstrap worked best for my big hands.

After the Beretta event, I tested the Beretta APX on a number of ranges, including Gunsite’s. I tested its accuracy at my home range, and I used Remington’s 115-grain FMJs and +P HTPs extensively. Raven Concealment Systems provided the Phantom holsters we used at the Summit, along with a rig compatible with SureFire X300 Ultra lights. Two night evolutions using simulators were perfect for testing in duty conditions.

The Phantom holsters worked well, holding the APX close to the body. The pistol draws smoothly and snaps back into place. The light-bearing version used a drop kit, making it easier to access the gun given its length. 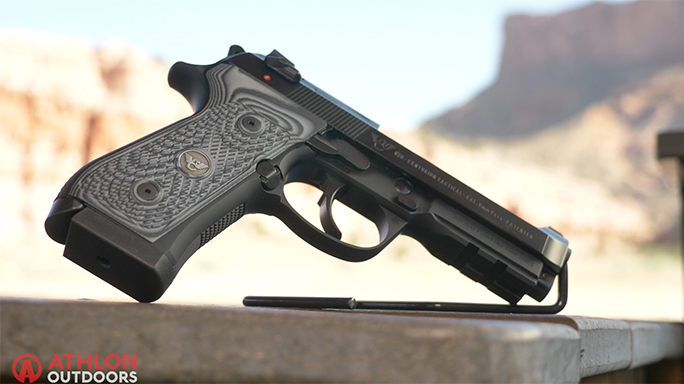 My first order of business was switching to the large backstrap. This is easy to do; I only needed a ballpoint pen. The backstrap locked in place solidly, and it’s held with a metal retainer, so it’s unlikely to come loose. With this backstrap in place, my accuracy tightened up, and the Beretta APX was easy to control during rapid-fire strings. Running the APX on Gunsite’s “Scrambler” course, I was able to consistently hit knock-down and silhouette targets at just over 80 yards.

No matter the position, the Beretta APX was plenty accurate and reliable. Whether it was fired from prone in the Arizona dust, around obstacles, supported or unsupported, it ran flawlessly. The sights were also easy to see. I would prefer tritium inserts, but that’s easy to fix. During malfunction drills, the slide cuts worked as intended. I could rack the slide on my belt, pants and shoes. They’re aggressive and useful no matter where you grab the slide.

Back at home, the Beretta APX fared well. It seemed to like the Remington HTPs and Federal HSTs about the same. The best group measured a bit under 2 inches at 25 yards with Remington’s 115-grain HTPs using the hood of my truck and a bag as a rest. Shooting groups off-hand at 15 yards produced clusters tighter than 4 inches. My rapid-fire results were about the same. There were also no malfunctions or failures to feed during the evaluation with any test ammunition. I repeatedly dropped the 17-round magazines on hard surfaces, yet they suffered no damage, nor did they induce any malfunctions.

Other than during unconventional reloads, I used the slide release exclusively. The slide locks in place solidly and seldom went into battery during a reload. It also released each time the slide release was pressed, however, and this button is well placed for precisely that purpose. This may not be your preferred protocol for charging the gun, but it works.

So far, the only polymer-framed pistol that fits me better is my Heckler & Koch VP9, but after some use, I prefer the APX’s trigger. On occasion, my finger will fail to hold the trigger safety on the VP9 with a less-than-perfect grip; this never happened on the APX. The APX’s trigger is also flat like a 1911’s, making it very comfortable. It may be the most endearing attribute for most users. Everyone who handled the APX said, “Wow, nice trigger,” or something to that effect.

Between the three backstraps, the APX should be able to fit most any officer. The texturing is just about right—not too aggressive but stout enough to get a solid hold under harsh conditions. No officer or civilian shooter should have a problem holding onto this gun.

The APX is also very comfortable to carry, enough so that I often carry it these days in the Raven Concealment Systems Phantom holster. As a straight-up fighting pistol, the APX is just about as good as it gets out of the box for only $575. Law enforcement agencies will likely pay less. I would like to see the gun come with three magazines, however, as that is a must. All duty pistols like this should come with three magazines as a minimum, no matter who they go to.

In the end, the Beretta APX is an excellent choice for use as a duty pistol. If your agency is looking to make a change, definitely include this one in the mix. It would work equally well for concealed carry and home defense. It’s just a solid pistol designed for hard work. If that is what you need, it may be just the ticket.