by Andy Grossman
in Guns, Handguns
0

Since before I can even remember, I wanted a Desert Eagle (Deagle). I mean, who would not want one of the largest handguns in the world? It is the gun everyone wants to shoot, but very few ever get the opportunity to do so. I was no different. I always wanted to shoot one and never really thought I would get to. That was until I did a Ballistic magazine Custom Challenge write up between Outlaw Ordnance and Dark Alliance Customs. It was a custom Desert Eagle challenge. 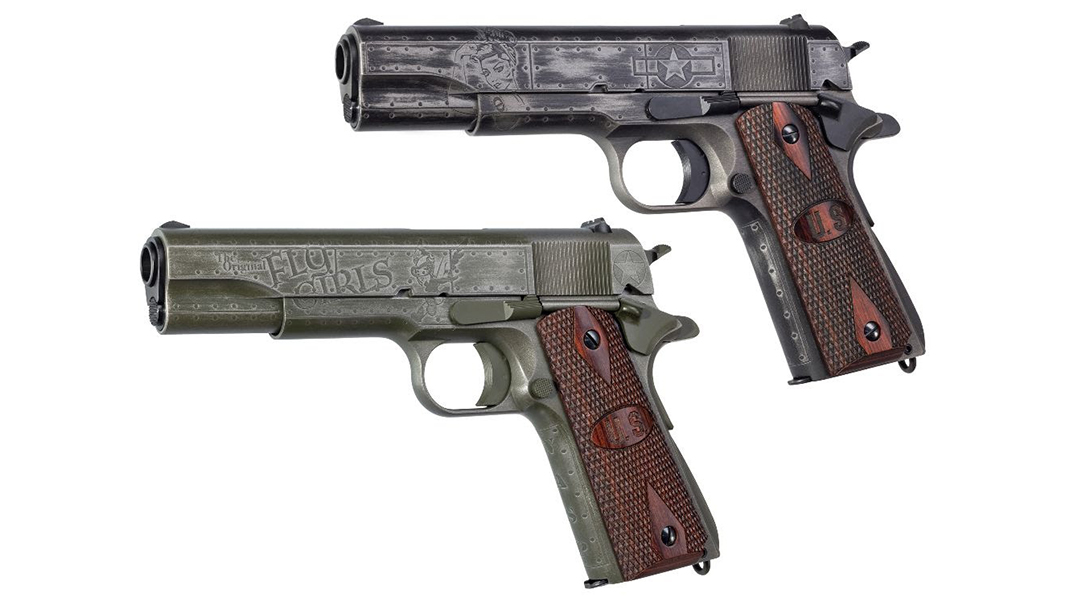 Two of the nicest Deagles anyone’s ever laid eyes on were sitting in front of me in my own home. My job was to tell the story of these two guns and how these amazing shops came up with the ideas and executed the design.

My job was not to shoot these guns. But when you have two custom Desert Eagles at your disposal you don’t pass on that opportunity to shoot them. The first pull of the trigger, I was hooked. I now didn’t just want a Deagle, I had to have one. I was spoiled with these one-of-a-kind custom Deagles and knew I needed something like them.

That’s about the time I decided to get myself a stock Magnum Research Desert Eagle chambered in .50 AE. I then sent it off to Outlaw Ordnance for some custom work. Outlaw Ordnance has a reputation for its work on pretty much all the Auto Ordnance line of pistols. Including, all the Trump guns out there and some of the absolute coolest Deagles anyone has ever seen. These guys are patriotic, badass mad gunsmiths with a laser and Cerakote.

I got hold of owners Nacho and Cheeto from Outlaw in hopes they would turn my gun into one of the Patriotic Presidential models or something similar. It didn’t really matter to me what it came out looking like. I would be happy as long as it screamed America from the rooftops out of a bald eagle’s beak.

After speaking with the two for a bit they told me they had an idea. When they started Outlaw Ordnance, they had a custom shop. They would design a gun for the owner and really make it personal for that one individual. As they got busier and grew, they had to move away from the custom shop work. They told me about the new shop and how with the extra space, they wanted to utilize my gun to kick it off the return of custom work. I pretty much told them to do whatever they wanted.

I really had no idea what I was getting and didn’t really care too much. Because, like my tattoos, I like to let artists work and do their thing. Next thing I knew I had an email from Nacho with a computer rendering of their ideas on this custom Desert Eagle. It blew my mind when I saw my social media posts pretty much turned into a gun.

I have been building a following at “Pew Pew Nation” over the past few years. It has been a passion and commitment to create some of the most patriotic and unique content on the interwebs. They also spread the message that guns are fun and don’t have to be scary.

Between my Instagram, Facebook, YouTube and live videos, we try to destroy the macho attitude of keyboard operators all over and make information obtainable to the common gun nut, beginner shooter or seasoned vet. Outlaw took all of this and made it into an absolutely mind-blowing, patriotic monster.

The Design and Prep

Once the design team came up with some renderings, Nacho sent them over to me to review. Again, I could tweak the designs however I might have wanted, but I wanted the artists to do their thing. I was not picky.

However, I did have to add something special to the end of the muzzle. I am a photographer by trade, so it was necessary to add, “Smile wait for flash,” on that giant surface right under the barrel of the Deagle. However, this won’t ever be a defensive handgun since prosecutors would twist my gun art into something that it’s not.

Once the computer rendering is complete, the gun heads off to be disassembled completely and put through the intense laser therapy of the massive Outlaw Ordnance lasers. It does not take long to cut the designs with the lasers, but the prep and set up does take time.

Since Outlaw does not take the easy way out by just mirroring the images on both sides of the gun, the process takes a bit more time and labor. Outlaw Ordnance prides themselves in making every inch of that gun a masterpiece of detailed fine art.

Once the slide and frame had finished their laser therapy, the custom-made Hogue grip panels went in for their time under the lasers. The grips on this gun, in my opinion, make the gun. Especially since I am on them using a flame thrower and holding my favorite AR that commemorates my best friend Tom, who passed away from cancer about five years ago. It does not get much cooler than that.

In addition to the art on the grips, the fact that they are metal and got the same polish as the frame and slide really set this thing off. After the engraving and cleanup are complete, all the parts head off to Cerakote. In the Cerakote booth, everything gets a nice coat of black paint and goes to the oven to cure for a while.

Now that it is all lasered and coated black, the painstaking process of polishing begins. I was incredibly surprised to find out that all the parts are 100 percent hand polished in the shop by a team of some skilled and patient workers. I am not a very polished guy, so they kept the finish kind of battle worn, which was perfect.

As I mentioned before, I pretty much let Outlaw run with their thoughts and design, and honestly, I had no idea what to expect. I was in Louisiana to tour the new Outlaw Ordnance world headquarters and kind of expected to watch them finalize the design while I was there. Nacho and Cheeto showed me around the old shop before taking me down to the new shop.

They were still in transition between the two shops, so most of the production was still down at the old shop. After we finished touring the facilities, they took me back to the old shop to show me a special project they had been working on. I thought I was about to see something brand new that they were doing for Magnum Research or President Trump or something when they pulled out a Desert Eagle case.

To my surprise, this was not just a Desert Eagle, this was my custom Desert Eagle! I honestly didn’t have words when I first laid my eyes on it. I did not know what to do or say. Nacho finally broke the silence and said, “Well, pick the thing up and check it out.”

In front of me was one of the most badass Deagles I have ever seen. I didn’t know where to start, so I kind of looked over the entire gun, taking it all in. This thing screamed ’Merica and Pew Pew Nation. I had to actually hold back tears because those guys would have definitely given me hell the rest of the trip if I started crying. Keep it together man!

This thing had details from the front of the muzzle to the back of the grips. Plus, the entire background was made to look like Damascus, which I am pretty much obsessed with. Some say the Damascus came out like tiger stripes, which I am perfectly fine with, also. This thing is absolutely mind blowing. The finish, the artwork and the fact that my likeness is etched into one of the most iconic guns in the history of pistols all make this thing extremely special.

I find that having a custom one-off Desert Eagle from Outlaw Ordnance makes you extremely popular at the range. Which is definitely a huge honor knowing that the gun is mine and made for me.

Outlaw Ordnance stopped doing custom one-off builds for a while. But with the introduction of this project they are pleased to announce the custom shop is back up and running. The new shop is ready to take on any and all of your special firearm projects.

A custom Outlaw piece is one you don’t forget—a gun that your children will hand down for generations to come. Get your custom build setup or check out all of Outlaw Ordnance’s incredible work at OutlawOrdnance.com.

This article was originally published in the Tactical Life Gun Annual June/July 2021 issue. Subscription is available in print and digital editions at OutdoorGroupStore.com. Or call 1-800-284-5668, or email subscriptions@athlonmediagroup.com.