by Todd Burgreen
in Guns, Handguns
0

"The CZ P-07 Suppressor Ready is a potent package due to its accuracy, reliability and capacity."

You might think of the CZ P-07 Suppressor Ready as the updated polymer sibling of the classic CZ 75. Handgun aficionados often cite the CZ 75’s grip angle and feel as ideal, and the P-07 comes very close to the CZ 75’s grip ergonomics. But the P-07 has several modern touches while maintaining the lineage of the legendary CZ 75. For example, the frame has been upgraded with a railed dust cover for mounting accessories like lights and lasers. Let’s take a closer look. 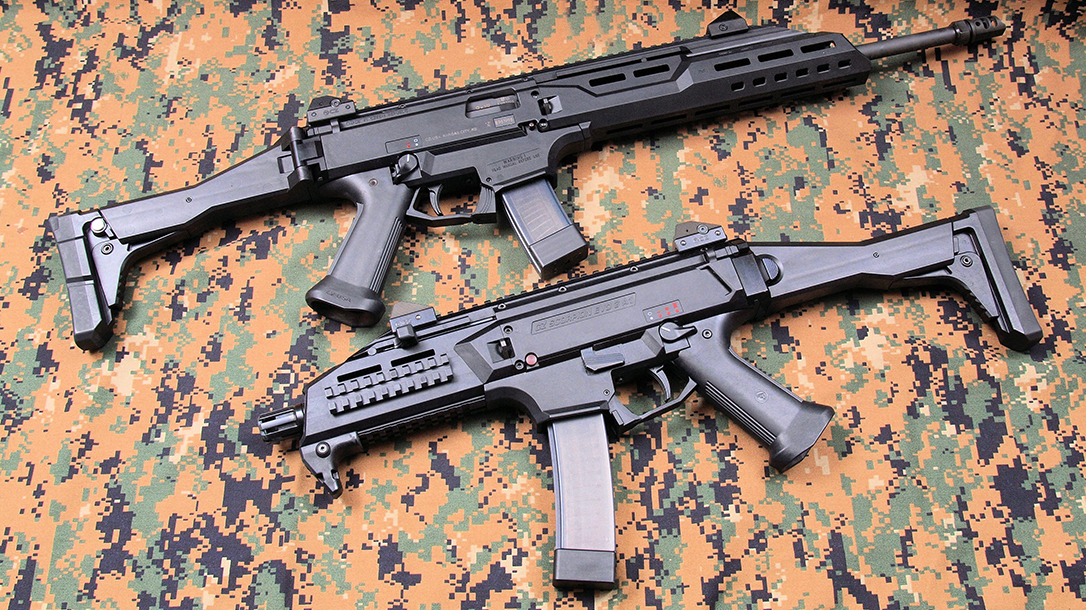 One of the features that attracted many to the CZ 75 was that you could carry it “cocked and locked” like a 1911 or Browning Hi-Power. However, hammer-down carry was also possible with a double-action (DA) trigger pull initiating firing.

Unlike the CZ 75, the P-07 comes standard with a decocker/safety lever. But CZ 75 aficionados should not despair, as CZ’s Omega trigger system is at the heart of the P-07 design. This system has fewer parts compared to the CZ 75 and in turn touts a better trigger pull in both DA and single-action (SA) modes. While the trigger pull is long—as is typical of DA/SA handguns—it’s smooth in DA mode and light with a short reset in SA mode. The other benefit of the CZ Omega system is the ability to switch the P-07’s standard decocker to a safety setup similar to the CZ 75’s, allowing for “Condition One” cocked-and-locked carry. Performing this switch is simple enough for a layman to accomplish.

The P-07’s frame, with its high-swept beavertail, is textured for a positive grip, even with wet or slippery hands. CZ even included rough-textured areas on the forward part of the frame that serve as “memory” spots for a shooter using a thumbs-forward grip. CZ also refined the pistol a year or so back, changing the name from the “P-07 Duty” to “P-07” and including interchangeable small, medium and large backstraps so users can adapt the pistol to fit their hand size better. The pistol was also dehorned for concealed carry, and CZ included a snag-free hammer and refined the trigger profile for more comfortable shooting during high-round-count range sessions. Metal three-dot sights and a beefed up magazine spring round out the P-07 updates.

The P-07’s slide is a tad thicker than the CZ 75’s. Many will find this thicker slide easier to grasp for sure manip-ulations. Forward cocking serrations are included for this purpose, too. The slide moves within the frame via rails embedded inside the polymer frame, versus more prevalent Western designs where the slide fits over the frame. The slide has a nitride finish that wears longer and increases the slide’s corrosion resistance.

The P-07 is a short-recoil-operated, locked-breech design, a la John Moses Browning, with a camming cut below the barrel. This serves to unlock and lower the barrel during the recoil cycle. But CZ has slightly modified Browning’s design by moving the locking recess from the barrel and instead using a single lug milled above the chamber that uses the slide’s large overhead ejection port as its locking recess. The front contour of the barrel lug cam slot has been cut square to direct counter-recoiling forces up and forward into the barrel itself to reduce stress on the lug. The pistol also uses an external extractor for enhanced reliability.

Finally, after making absolutely sure the pistol is unloaded, the P-07 disassembles quickly by pulling back slightly on the slide, aligning witness marks found on the frame and slide, and then pushing the slide stop lever out of the frame.

My test model was the 9mm P-07 Suppressor Ready. It came with a threaded barrel and taller sights that work over the top of a sound suppressor. With its 1/2×28-tpi threading, the barrel is 4.36 inches long. The pistol weighs 28.7 ounces unloaded with an overall length of 7.9 inches. And while the standard P-07 comes with 15-round magazines, the Suppressor Ready variant comes with extended 17-round magazines. My test pistol was matte black, but a model with an Urban Grey frame is available.

The P-07 Suppressor Ready’s tall, adjustable, steel sights are set up in a three-dot configuration, with two tritium inserts in the rear sight and one in the front sight. The elevated sights are quick to pick up and work well in low-light situations. Of course, a user concerned about these sights snagging on gear could always resort back to normal-height sights if needed, but as is, these are highly functional.

At the range, the P-07 Suppressor Ready impressively handled all of the test ammunition, across bullet weights and styles, with equal aplomb. I ran the pistol with loads from Black Hill; Federal; Hornad; and Winchester with both hollow points and FMJs ranging between 115 and 147 grains. Significantly, I didn’t experience a single malfunction over 500 rounds of testing.

Testing a weapon like this should replicate how it’ll be used in the real world—firing off-hand without support and while moving to get off the “X.” This is the true measure of a pistol’s accuracy, combining its trigger pull, grip and sights. After a few runs to get used to the trigger pull, first-round hits became the norm on the various steel targets, plate racks and dueling trees at my local range. And let me just say that this is easily one of the nicest DA/SA trigger systems I’ve used. Being able to convert the decocker to a standard thumb safety is also a nice bonus; the Omega’s flexibility is a great enhancement. Once you’ve mastered this trigger—which doesn’t take much time at all—you’ll be able to fire multiple shot strings with the utmost accuracy.

The P-07 Suppressor Ready’s threaded barrel and tall sights indicate that it’s designed for more tactical or home-defense purposes. So, with that in mind, I decided to dedicate some time at the range evaluating the pistol using several drills I’d previously learned from training courses at various schools over the years. These drills included dynamic entries and other CQB-type exercises inside a shoothouse. Tight confines require an accurate, fast-handling handgun that can put multiple rounds on target in quick succession—and this is where the P-07 Suppressor Ready really shined. It came into its own thanks to its natural “pointability,” and during high-volume drills I experience no problems reloading the P-07 thanks to its easily accessible magazine release button.

More importantly, the pistol’s ergonomics and handling characteristics are exceptional, and you’ll immediately understand why the CZ 75 platform is so highly regarded. The beavertail grip frame and overall balance of the P-07 made the felt recoil almost negligible. The P-07’s slide reciprocated smoothly with the sights tracking perfectly in between shots fired. 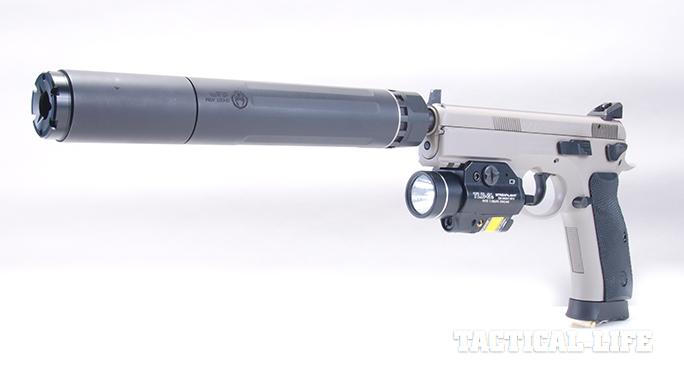 To evaluate the handgun’s full potential, I attached a Cobra M2 sound suppressor from Yankee Hill Machine (YHM). Mounting the suppressor simply required removing the included thread protector and screwing the Cobra M2 via onto the barrel via the appropriate YHM adapter. With this setup, I chose to run the pistol with 147-grain 9mm loads because they’re typically subsonic. This is one of the reasons why 9mm handguns are favorites for suppression. However, the YHM Cobra M2 proved effective at taming the muzzle blast of even supersonic 115- and 124-grain +P loads. Also, all loads could be comfortably fired without the use of ear protection with the YHM suppressor installed. Even in an indoor environment.

The added weight of the YHM suppressor did not hinder the pistol’s handling, and the 17-round magazines minimize the likelihood of needing to reload during a typical engagement where the P-07 is used as a primary weapon. The tall sights were also highly visible over the top of the suppressor. As a side note, however, the taller sights make holster selection a bit more problematic. As I said before, even if not so equipped, the P-07 would have performed fine within 10 yards using point-shooting techniques or simply sighting down the extended length of the mounted suppressor.