by Andy Massimilian
in Guns, Handguns
0

The CZ Scorpion EVO 3 S2 Micro becomes CZ’s third and most featured rendition of the Scorpion EVO. It serves as a civilian version of a specially equipped EVO submachine gun made for a narcotics interdiction agency, delivering a short, potent, suppressed variant. To make that weapon, CZ shortened the barrel on the EVO S1 from 7.75 inches to 4.12 inches. It also switched to a shorter forend made by HB Industries and supplied a CZ S2 Ti reflex suppressor. 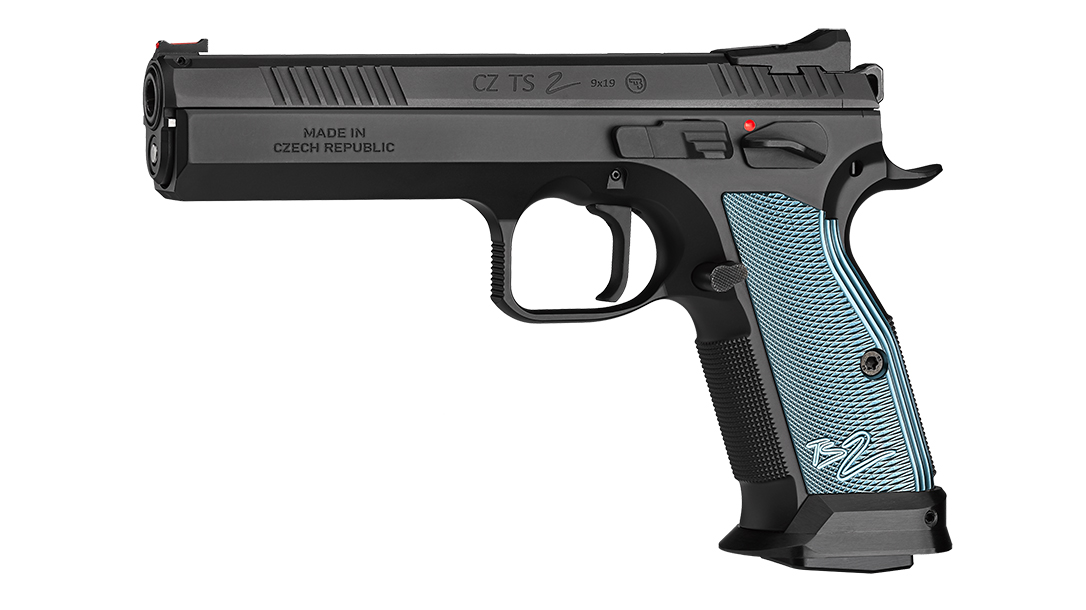 The S2 Ti reflex is 9.2 inches long, but extends only 5.8 inches beyond the muzzle because its 2-inch reflex chamber wraps around the barrel to provide the needed volume to cool and slow the combustion gases without adding length. The civilian version tested here patterns after the narc cop sub-gun. The pistol variant utilizes an arm brace rather than a collapsible stock. It also features an inert No Osprey suppressor from SilencerCo. The No Osprey resembles SilencerCo’s distinctive-looking Osprey 9.

The S2 weighs 5.5 pounds and measures 16.4 inches/23.4 inches long with the brace collapsed/extended. Removing the arm brace trims the weight to about 4 pounds. The design incorporates two polymer shells joined together clamshell style with six hex-head screws that contain the serialized and FFL-controlled steel receiver. The swing-down trigger assembly connects to the assembled shell by a pinup front and a ledge at the rear. Though much of this pistol is made of polymer—including the trigger face, mag release and safety levers—the internal components of the firing mechanism are steel, and the unit is hammer-fired.

The S2 shares the appealing and not-so-appealing features of the Scorpion EVO series. On the plus side, the S2 utilizes ambidextrous safety levers and mag release, a reversible charging handle, adjustable sights, adjustable grip for trigger reach and simple, tool-less takedown. The bolt locks open after the last round fired. A bolt catch mounted on the left side, which is readily accessible to your thumb when grasping the weapon by the mag well, catches the mag. Most significant among the positive attributes, however, is a design that lends itself to easy replacement of parts that are made by several companies, making the Scorpion EVO among the most customizable pistol-carbine platforms available.

The S2’s features that could use improvement are the shape of the safety levers (which abrade the firing hand’s trigger finger), a cocking handle that is too small and causes you to rap your knuckles against the receiver’s top rail and a long, gritty trigger pull that measures 9 pounds, 10 ounces on a Lyman gauge. Fortunately, these shortcomings can be overcome with a cornucopia of aftermarket parts from HB Industries, Nelson Precision, Shooters Element, Yeti Wurks and others. CZ Custom also sells a trigger pack that replaces all trigger-related parts—not just the return spring—but for a hefty $221.

The S2, blowback-operated, comes with two 20-round, assisted-removal, translucent polymer magazines. A non-reciprocating handle mounted on the top forward portion of the forend charges the gun. It operates similarly to the cocking piece on the HK MP5. The handle pivots upward to engage a notch and lock the action open when retracted. The S2 also uses a safety that arrests the forward movement of the firing pin until the trigger engages. May AR-type 9mm guns lack this feature.

The steel and aluminum sights consist of a protected aperture rear and a protected front post. Elevation adjusts at the front using a supplied tool, and windage at the rear by turning a knob secured with detents. The rear sight has four different-size apertures, but only the largest two are practical to use when sighting the S2 at arm’s length. The sight radius of 9.25 inches puts the S2 in the same range as a Model 29 revolver with a 6-inch barrel, but with the added sighting benefit of an aperture.

The forend is M-LOK capable and affords a comfortable hold, but if you grip the forend instead of the magazine well, only one side has enough space for mounting a light or laser. A hand stop helps prevent you from sliding your hand forward in front of the muzzle.

The Reflex measures 1.5 inches in diameter and features a tubeless design. It uses two blast baffles followed by seven main baffles. The design closely resembles the original Maxim silencer. The titanium (Ti Reflex) version weighs 9.6 ounces, while the stainless steel weighs 15.4. Mounting the Reflex can extends the length of the entire weapon to 20.5 inches/26.4 inches with the arm brace retracted/extended, compared to the stock S2 version with the No Osprey.

Pistols with arm braces don’t lend themselves to an easily assumed firing platform that aligns your sighting eye with the gun sights, so they require experimentation. However, I tested three shooting methods, none of which uses the brace as a stock.

The first and most intuitive technique uses the back of the arm brace as a cheekrest. The brace sits about 1.5 inches forward of your shoulder. However, it contacts your cheek and lightly contacts your firing arm to dampen wobble. Your support hand grasps the forend or the magazine well. This position is rapid to assume and comes closest to naturally aligning your dominant eye with the sights.

The other two methods strap the arm brace to your forearm. The first requires you to take a bladed stance to the target and use the brace as designed, with both rubber legs wrapping the forearm secured with the elastic strap. You’ll need to cant the weapon inward to align your dominant eye with the sights, and grasp the pistol grip with your support hand.

The alternative method straps the brace to the inner side of the forearm without the rubbery portion wrapping around it. This method is quicker to deploy and does not require canting the sights as much. However, it requires a much longer elastic strap to work. Both methods keep the support hand off the forearm.

Of course, the arm brace can be placed in the closed position and ignored by holding the weapon close to your face, with the support hand on the forend.

The S2’s ergonomics are much improved after installing the safety and cocking handle from HB Industries, but the mag release levers and left-side bolt catch work well as is. Southpaws will especially appreciate these controls being readily activated with the left hand’s trigger finger. The translucent magazines insert easily and lock firmly into the magazine well with its chamfered edges. They are more durable than they first appear, and survived several hard knocks onto pavement when loaded. This pistol has eyelets at the rear of the grip frame on both sides to attach a sling.

Reliability was good, with two failures to feed flat-nose, 147-grain FMJ rounds in 200 rounds of testing. The Scorpion handles steel-cased and +P ammo, but stay away from aluminum-cased rounds because of the gun’s blowback design.

Adding the Ti Reflex suppressor (which I used for testing) did not alter the pistol’s function or increase backpressure noticeably. Since CZ does not publish sound reduction measurements, I tested the CZ Scorpion EVO 3 S2 with both the S2 Reflex and the original Advanced Armament (AAC) Ti-Rant 9, which AAC rated as reducing sound by 35 to 38 decibels (dB). Though the CZ suppressor has much more internal volume than the Ti-Rant, it was less capable at sound reduction by an average of 3.9 dB. However, the Ti-Rant does not comprise a reflex design. It also adds 8 inches to the muzzle; this extends the length of the weapon by about 2.2 inches compared to the EVO equipped with the Ti Reflex.

The CZ Scorpion EVO 3 S2 transforms into a short-barreled rifle with a shoulder stock, suppressor, a few aftermarket parts to improve ergonomics and 30-round magazines in its ultimate civilian configuration. But the ultimate configuration remains an expensive proposition, carrying $400 in NFA tax stamps alone. A version without the arm brace and faux suppressor would drop the price tag $200, a welcome inclusion. For even more information, visit cz-usa.com.

This article is from the Stealth 2021 issue of Tactical Life magazine. Grab your copy at OutdoorGroupStore.com.