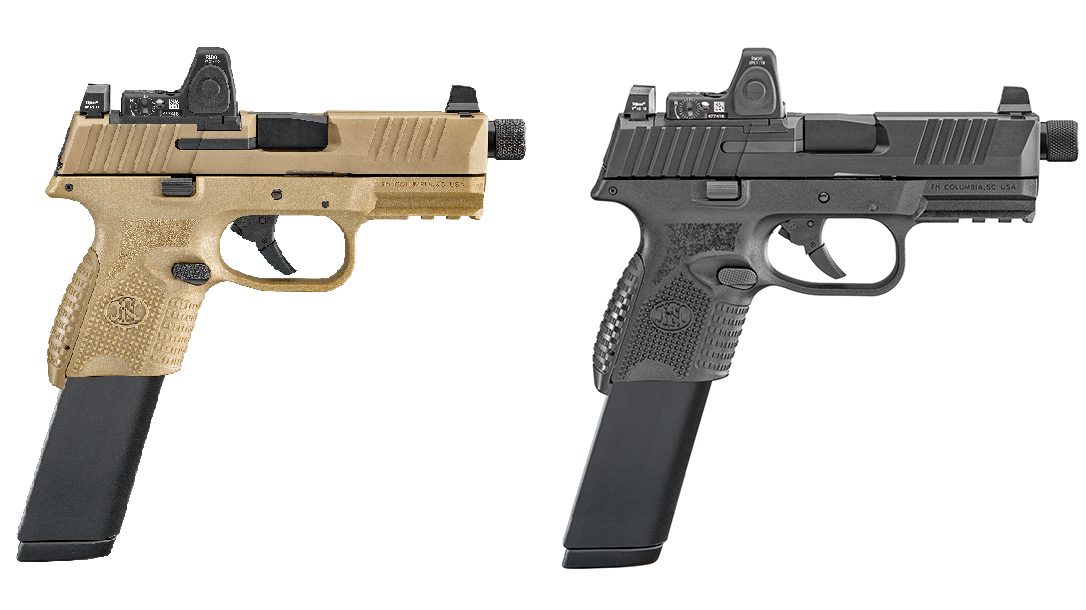 The FN 509 Compact Tactical is our cover gun for the 2020 Tactical Life Gun Annual! Grab physical or digital copies now at OutdoorGroupStore.com.

FN originally developed its 509 pistol for the Army’s Modular Handgun Systems (MHS) trial. And while the FN gun didn’t win the contract, the 509 certainly won the civilian market. FN America introduced the gun in 2017 several different variations have since appeared, including a mid-size gun with a slightly abbreviated grip frame and reduced capacity, as well as Tactical models with suppressor sights and a threaded muzzles. Just this past January, FN introduced its new 509 Compact model with a slightly shortened barrel and grip frame. Now in mid-May 2020, FN just announced its 509 Compact Tactical. I’ve had a sample to work with the last couple weeks and I have to say that I am impressed! 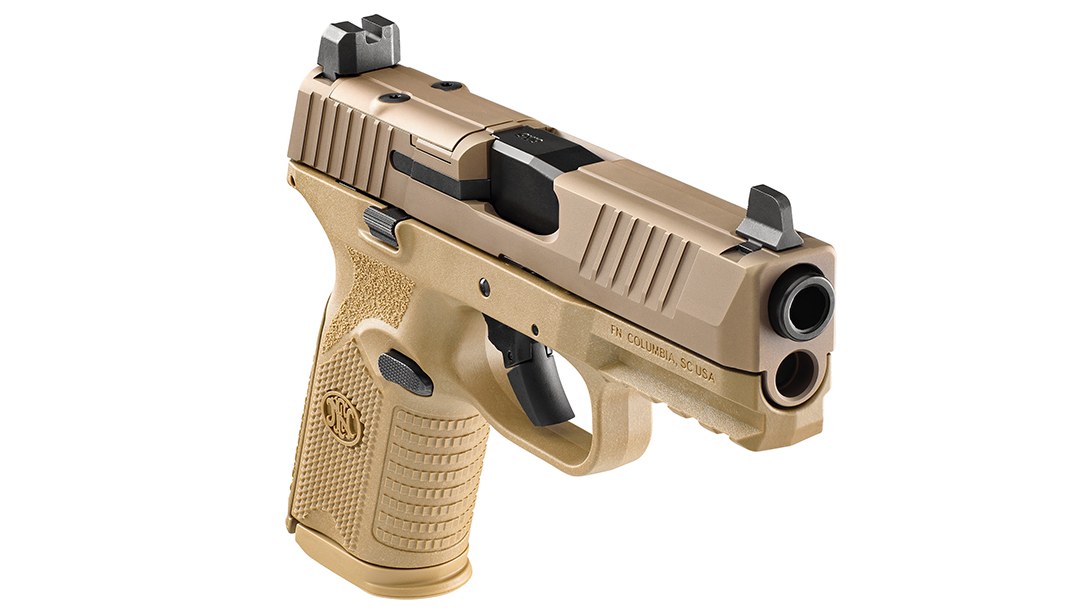 My test pistol possesses an FDE finish with parts like the magazine release, takedown lever, barrel and extractor finished in black for a pleasing contrast. FN America outfits the slide with Trijicon Tritium suppressor height sights. Meanwhile, the slide cap has raised wings to protect the rear sight from blows that might affect its zero. FN’s Low Profile Mounting System enables the platform to accept more than 10 different miniature red dots and includes mounting plates with the gun.

For accuracy’s sake FN uses a blackened stainless-steel barrel. It has been cold hammer forged with a 1:10” right hand twist and given a recessed target crown. Both the chamber and integral feedramp have been polished to perfection and the muzzle is threaded ½” x 28. FN includes a thread protector cap with an O-ring that prevents the cap from coming unscrewed when firing without a suppressor. The 509 Compact Tactical also uses a dual recoil spring system to give the gun all of the spring mass needed to cycle reliably. 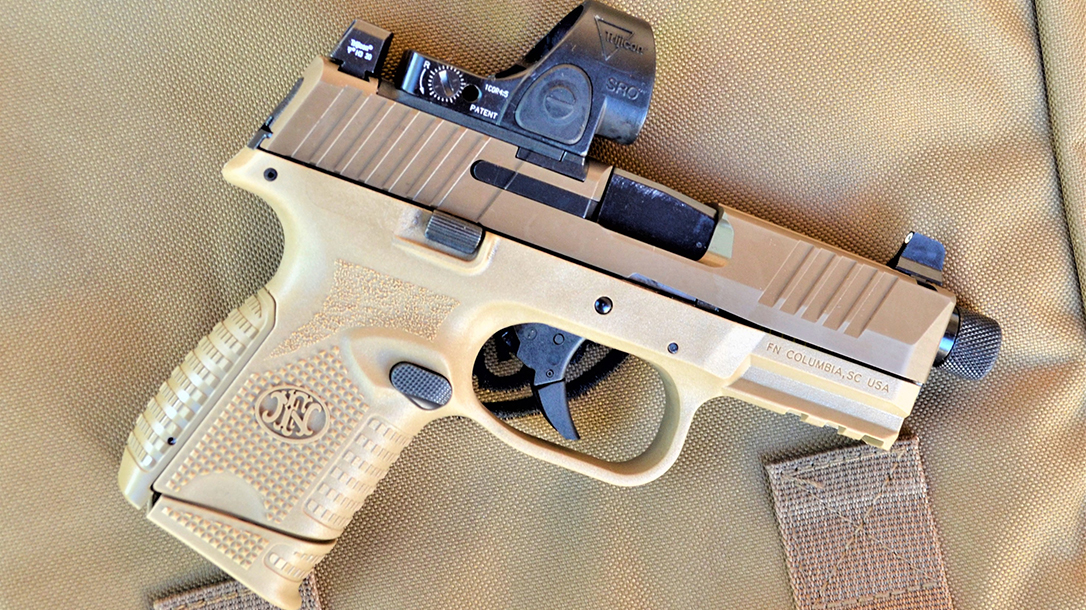 The FN 509 Compact Tactical comes with two different backstraps. They can be interchanged by simply pushing out its retaining pin, sliding the backstrap off the frame, installing the new part and reinstalling the pin. The injection molded grip frame features grenade-style checkering on the frontstrap and backstraps and sharp, pyramids on the side for a no-slip grip. There’s a MIL-STD 1913 accessory rail on the frame’s dust cover. The gun also has an oversized trigger guard for use with gloves.

FN engineers designed the frame with a replaceable stainless-steel chassis in the event of a part failure. They also designed the 509 to be ambidextrous; both the slide stop and magazine release can be activated from either side of the frame. The gun’s external extractor also serves as both a visual and tactile loaded chamber indicator.

FN engineers integrated four passive safeties in the 509’s design. There is a striker block that prevents the striker tip from protruding through the breech face unless the trigger is pulled. The drop safety prevents the sear from moving out of engagement with the striker unless the trigger is deliberately pulled and trigger disconnect safety is actuated when the disconnect cam is pushed out of alignment with the sear, preventing it from releasing the striker; this prevents the gun from firing when the slide is out of battery. Like many of the other current generation of striker-fired guns, the FN 509 has a trigger safety that blocks rearward movement of the trigger unless purposefully pulled; this prevents inertia movement of the trigger if the gun is dropped on its muzzle. 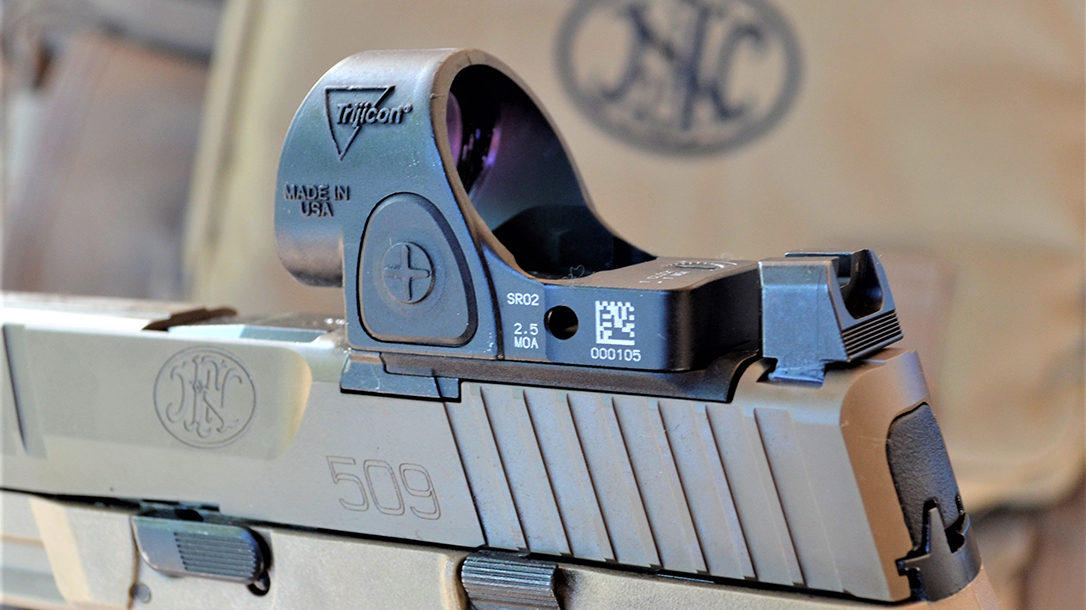 My test gun’s trigger broke at a reasonable 6.25 pounds. While it is far from a match-grade trigger, the pull is serviceable and one of the better striker triggers on the market. Because of the gun’s compact size I decided to test its accuracy at 15-yards. I fired all of my groups from a seated position utilizing a DOA Tactical portable shooting bench. Then I rested the 509 Compact Tactical’s dust cover on a Millett BenchMaster for support as I added the necessary pressure to the trigger to break the shot.

I fired my first set of groups using the gun’s issue suppressor sights. After that, I removed the slide cap and found the correct mounting plate in the 509 Compact Tactical’s nylon case to install a Trijicon SRO2 with a 2.5 MOA red dot. Then I re-fired the groups. At 15-yards the red dot fit nicely inside the 2-inch diameter Shoot N C targets I was using. Surprisingly, my groups with the red dot sight averaged just slightly larger than my iron sight group. But red dot sights are really valuable for quick target acquisition. Shooting with both eyes open I was able to find the red dot much quicker than I could align the sights. It also allows the shooter to concentrate on the target instead of the sights and that makes a lot of sense for law enforcement and self-defense work.

I shot most of the groups with the short 12-round magazine in place and didn’t at all feel hampered by its small size. Switching to the 15-round magazine made it feel like I was shooting a full-size gun. I think most shooters would find the gun easier to shoot using the larger magazine. FN America also includes a third magazine that holds 24-rounds though I can’t think of a situation that I’d be inclined to use it.

There were no failures or stoppages of any type during the 300-round evaluation. The gun digested everything from 77-grain solid copper hollow points to 138-grain synthetic jacketed lead without a bobble. Small, sleek and effective the FN 509 Compact Tactical is a gun that should easily handle CCW and more clandestine assignments with aplomb! For more information, please visit FNAmerica.com. 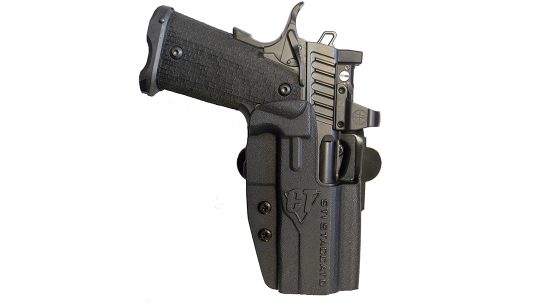