From 1958 to 1961, Steve McQueen played bounty hunter Josh Randall in the TV series “Wanted: Dead or Alive.”  I came across the show years ago. I watched McQueen bring justice to TV’s banditos with a loop-levered Model 92 Winchester. It featured a shortened barrel and stock so it could be carried on the hip, like a pistol, in an open-sided holster. McQueen dubbed it the “Mare’s Leg.” Why? Because as an avid shooter in real life, he claimed that the pistol kicked like a mule. He made the Mare’s Leg look so cool I knew I had to get my hands on something like it. So I got my hands on a Henry Mare’s Leg. 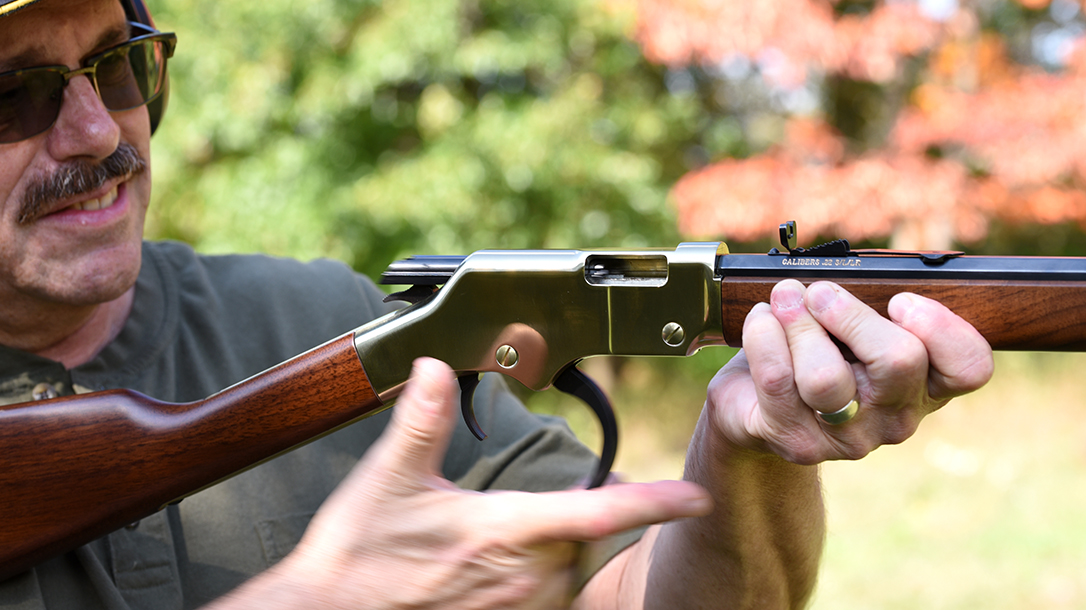 VIDEO: Testing the Classic Henry Lever Action 22 Rifle in All Its Glory

A lever-action pistol doesn’t scream practicality or usefulness. However, it does scream badass and fun. I got my hands on a beautiful Golden Boy model, with its brass receiver and octagonal barrel, chambered in .45 Long Colt. The Mare’s Leg also feeds through a front-loading tube magazine; it holds up to six rounds of standard length .45 Long Colt ammunition. Holding the Mare’s Leg, you instantly feel like a Wild West cowboy ready to take on anything. The American Walnut furniture shines under its polish. The brass finished receiver and butt plate, as well as the blued barrel and tube magazine, are blemish free and beautiful. The biggest downfall to any Henry firearm for me has always been the sheer beauty of them. Henry rifles are like pieces of art and hard to shoot at times because of fear of scratching them up.

At first glance, the Henry Mare’s Leg doesn’t look capable of being at all accurate. It is kind of awkward to hold since you can’t shoulder it. In fact, you feel like you’re going to knock your own teeth out just before pulling the trigger for the first time. Surprisingly, upon that first shot from about 50 yards away I heard the beautiful ping of the round hitting steel on the Target Solutions USA silhouette.

Shooting the mare’s leg was one of the most entertaining shooting experiences I have ever had at the range. The only thing comparable is lighting up a huge pile of Sonic Boom exploding targets with a full auto AR-15. I think the Mare’s Leg is still more fun to shoot though. Throwing that lever as fast as possible and hearing the sounds of the next round being chambered just puts a giant smile on my face. The Henry Mare’s Leg pistol is just an all-around fun and exciting gun to shoot. It would really make a great addition to any collection.