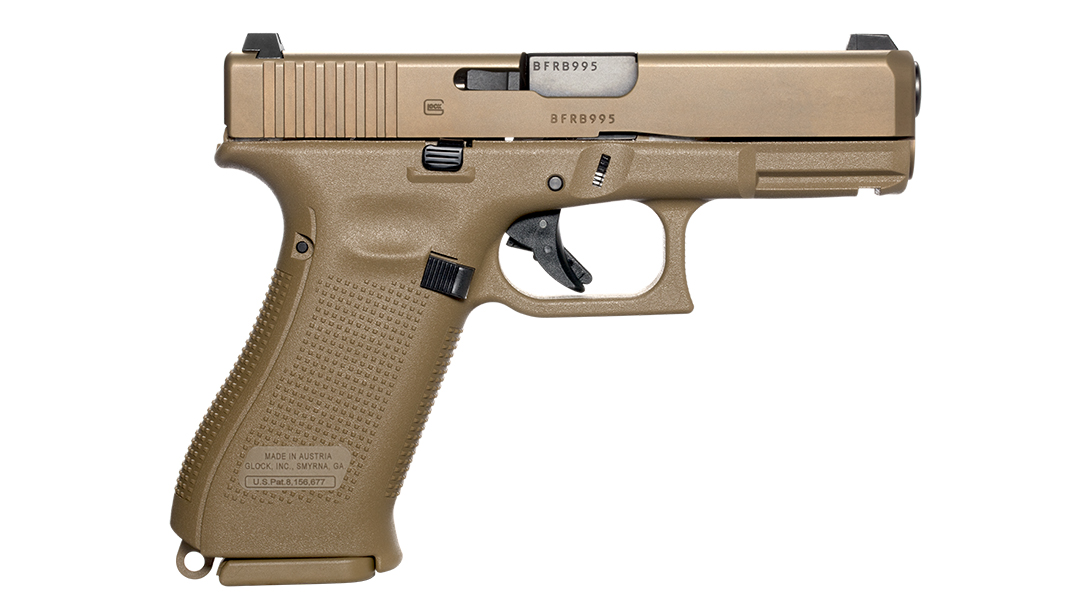 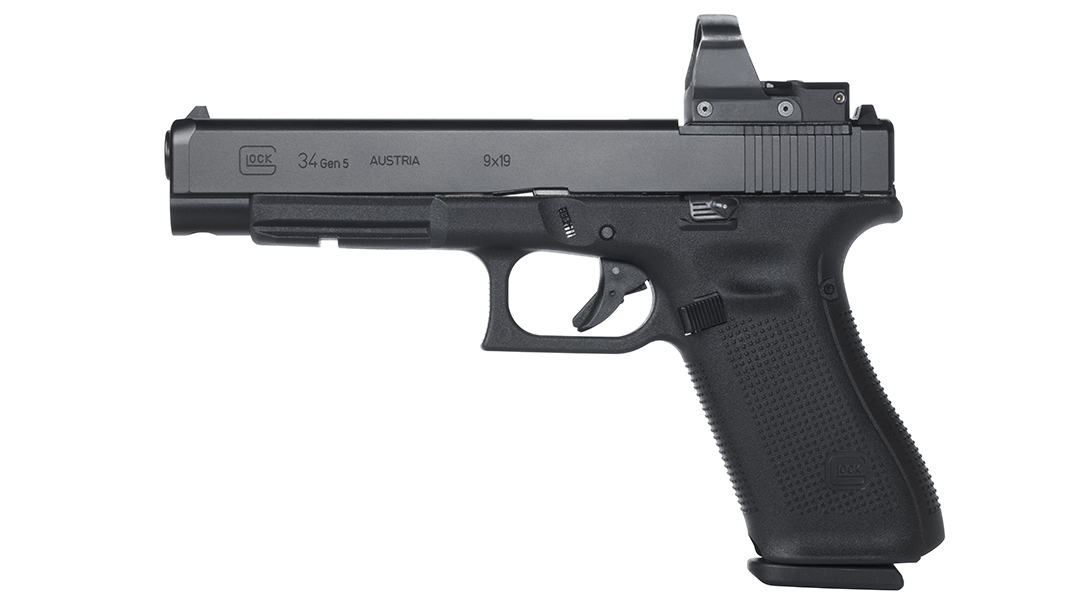 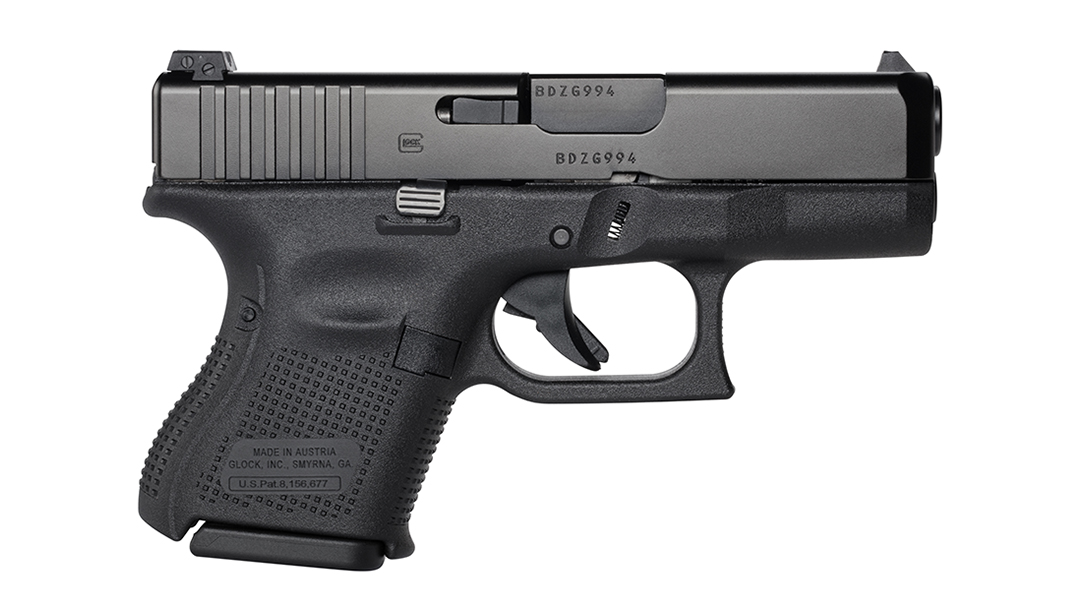 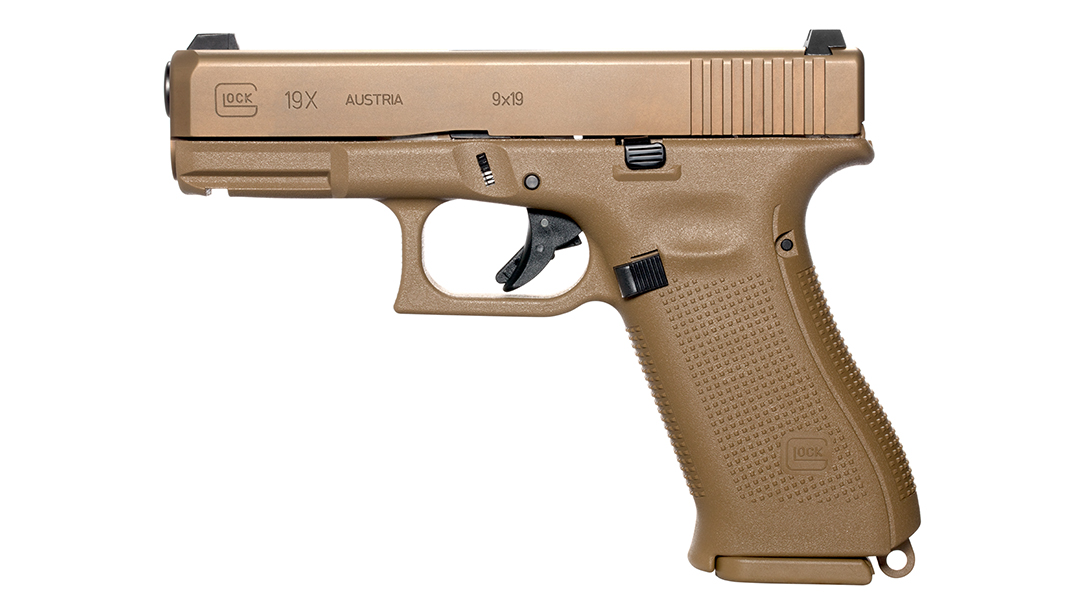 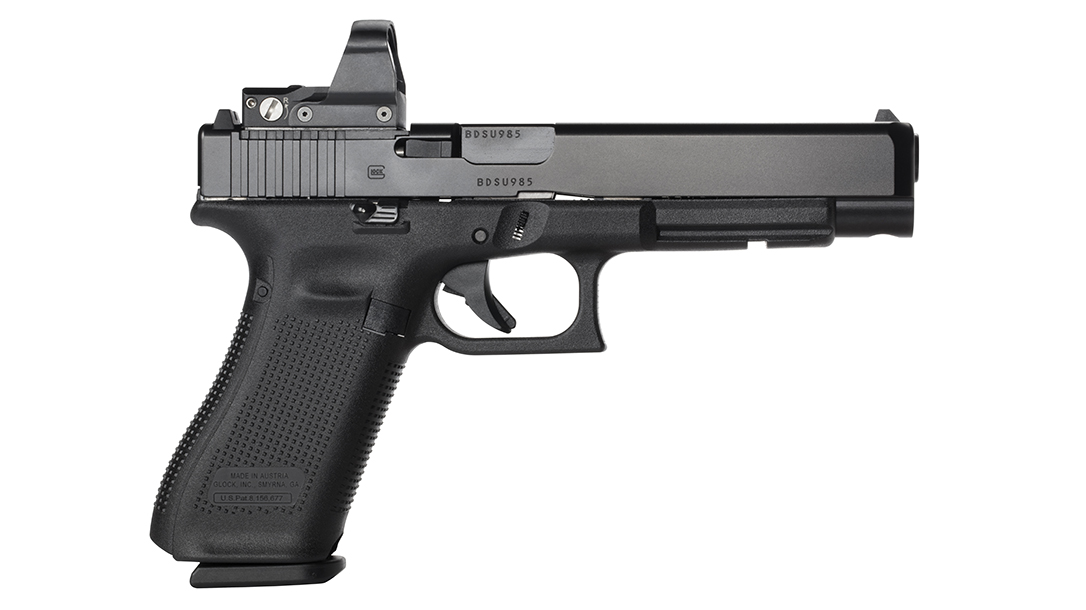 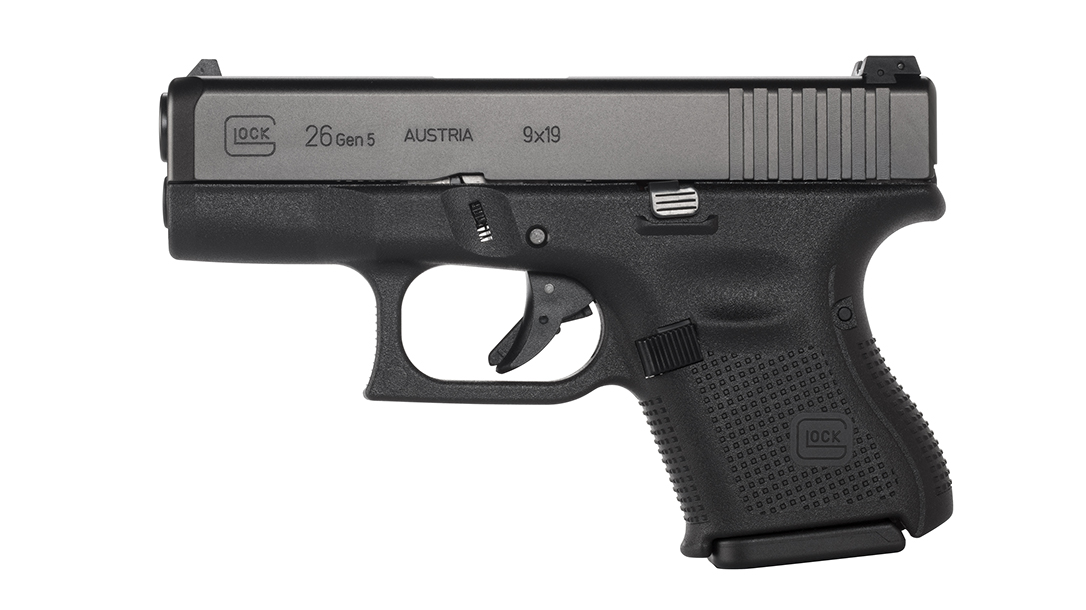 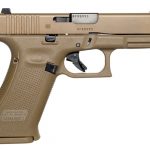 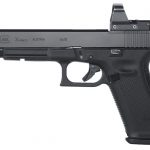 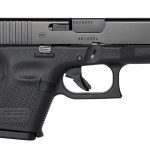 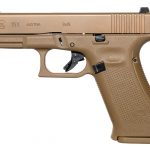 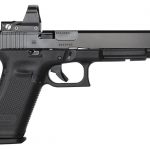 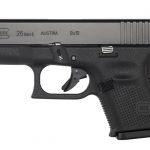 In early December of 2017, I was one of several gun writers invited to Glock‘s headquarters in Smyrna, Ga. It was hush-hush, and the only thing we were told was that we would be the first people to see three new Glock pistols. Needless to say, my curiosity was piqued by this cloak-and-dagger secrecy. This was not criticism of Mr. Glock’s innovative pistols, but a compliment. Because, regardless of the model, Glock pistols had the same manual of arms, were disassembled in the same manner and, in many cases, had a high degree of parts interchangeability. When you learned how to handle one Glock, you essentially had the knowledge to handle all of them, lowering the learning curve between models.

Over the past three decades, Glock pistols have constantly improved. These changes were both technical and cosmetic, and Glock distinguished each iteration as a “generation.” The original Gen1 pistol was followed by the Gen2, and so on. Today, we have the Gen5 line. Which brings me back to the meeting at Glock’s headquarters, where we were introduced to the new G26 Gen5, G34 Gen5 and G19X—three pistols that I was later able to take home and test.

At the Glock media event, I was told that the company’s Gen5 pistols have 35 new or updated components, several of which are not interchangeable with earlier models. The first thing I noticed is that the finger grooves have been removed from Gen5 grip frames. Some folks liked the grooved Gen4 frame, but others, including me, did not.

In fact, all Gen5 pistols feature Glock’s newest Rough Textured Frame (RTF) 3 surface treatment, which provides an extremely firm purchase even with wet or oily hands and greatly aids in recoil control. And a feature that Glocks have long needed has been added at the butt of the grip frame. The magazine well has been flared so magazine lips won’t catch on the frame (and don’t tell me that hasn’t happened to you), allowing for fast, fumble-free reloads.

The interchangeable backstraps introduced with the Gen4 series are still present. I installed the medium-sized backstrap on the three pistols I received for testing. I believe these are the most significant improvements in the pistols’ ergonomics to date.

The front of the grip frame on the G19X and G26 Gen5 has a lip that prevents pinching caused by the gap between the grip frame and magazine basepads, something shooters with large hands or longer fingers sometimes experienced with earlier pistols. Considering the G34 Gen5’s intended role as a competition pistol, the front lip of the magazine basepad has been lengthened, and the frontstrap has a half-moon relief cut, letting you manually extract a recalcitrant magazine. It’s also worth noting that Gen5 pistols will accept magazines from earlier models.

The magazine followers on the G26 Gen5 and G34 Gen5 are made from orange polymer, letting a shooter quickly ascertain if the magazine is empty. The Glock 19X was designed as a military handgun, so the followers are the same coyote tan color as the rest of the pistol. All Gen5 pistols also come with three magazines, and two of the G19X’s included magazines have extended basepads to hold 19 rounds. 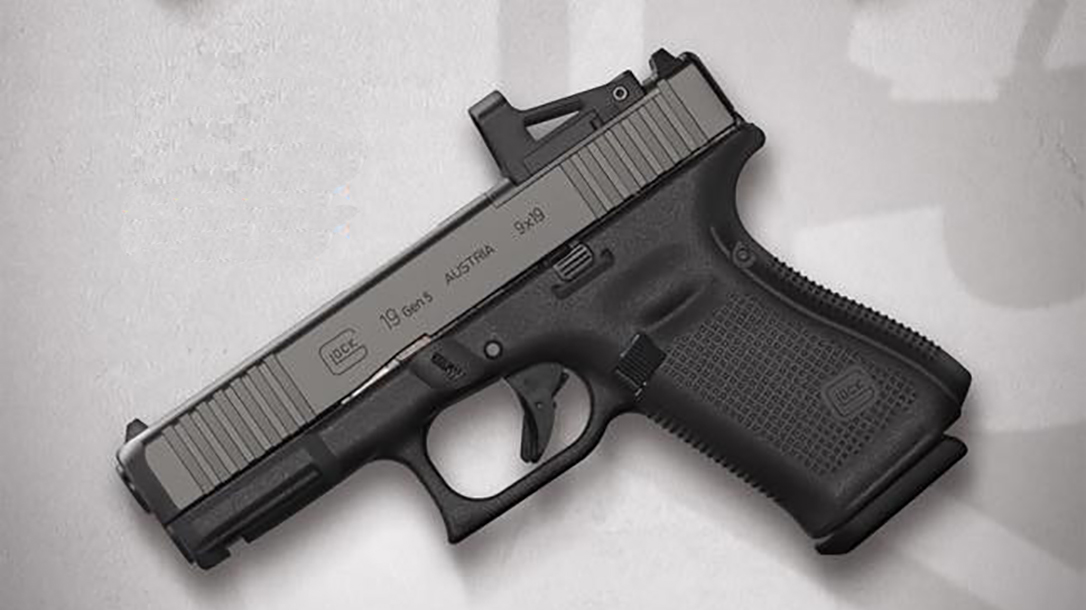 The triggerguards now have more aggressive undercuts; this lets you get a higher grip on each pistol for better ergonomics and recoil control. Still, it befuddles me why Glocks still have that curved finger rest at the front of their triggerguards. I can’t recall seeing anyone shoot with their support-hand finger wrapped around the front of the triggerguard—something that could pull your shots off target.

Glock’s Tenifer finish set the standard for high-tech pistol coatings. However, the Gen5 series has gone one better with Glock’s proprietary “nDLC” finish. This is a tougher, more durable finish that increases protection against scratches and corrosion, improves functioning under adverse conditions and provides a darker, more attractive appearance. At this time, the nDLC finish is exclusive to Gen5 pistols.

Gen5 pistols are also 100-percent ambidextrous, as they come with ambidextrous slide stops and large magazine catches that can easily be reversed. The slide lock lever’s leaf spring has been replaced with a coil spring. Also, there’s only one pin in the locking block/trigger mechanism. A second pin was added to Gen3 pistols because the trigger pin alone wasn’t strong enough to deal with some cartridges like the .40 S&W and 10mm, for example. With Gen5 pistols, that locking block pin is gone, as they’re currently only available in 9mm.

The Glock Marksman Barrel (GMB) marks a major improvement in Gen5 series pistols. It features enhanced hexagonal rifling and a crowned muzzle, which protects the rifling from damage by impacts and cleaning rods. If the muzzle crown is not true, propellant gas will escape on one side of the bullet while the other remains engaged within the bore, causing the bullet to tip as it exits the muzzle. But it’s worth noting that this means Gen5 series barrels are not interchangeable with those of earlier models.

An examination of the Gen 5 internals revealed the firing pin has a square profile with ramping on both sides. The striker safety plunger has a ramped—rather than round—configuration, and the trigger return spring has been moved inside the mechanism housing. The striker, extractor, slide plate cover and entire trigger system have been redesigned and are not interchangeable with earlier parts. The recoil springs for the G19X and G34 Gen5 are not interchangeable with Gen4 springs; this is because of the locking block/barrel change, and the nose ring being thicker. The G26 Gen5 recoil spring is interchangeable.

Now let’s look at the new trio of Gen5 pistols more closely. The G19X was designed for the Army’s Modular Handgun System (MHS) trials and is basically a modified G17 frame with a G19-length slide assembly. Although the G19X pistols submitted for the MHS trials featured ambidextrous thumb safeties, Glock decided not to offer them commercially. Unique to the G19X are its coyote tan finish and a lanyard attachment point on the heel of the grip. The latter can be removed.

The G34 Gen5 is visually similar to the Gen4 version until you notice that it doesn’t have an open-top slide. This pistol is also part of Glock’s Modular Optic System (MOS) line; it allows shooters to add miniature reflex sights for competition and other uses. At the rear of the slide, there’s a metal cover retained by two Allen screws. When it’s removed, you’ll see the slide had been cut so you can attach adapter plates directly on the slide. Four adapter plates and screws come with the pistol and are suitable for mounting Trijicon, Leupold, EOTech, Meopta, Docter, C-More and Insight reflex sights. In addition, the G34 Gen5 is fitted with a competition trigger that breaks with 5.4 pounds of pressure.

Although the G26 Gen5 has the same 1.4-inch width as its cousins, it features an attenuated slide and grip frame for easier concealment. The magazine holds 10 rounds but will accept all larger-capacity 9mm Glock magazines. This is a nice carryover. I personally carry a G26 with a spare 17-round G17 magazine for reloads.

Before leaving for the range, I mounted a Leupold DeltaPoint reflex sight on the G34 Gen5. Then, after zeroing it, my wife, Becky, and I ran the Glocks through their paces. Our accuracy testing consisted of firing three 5-shot groups from an MTM K-Zone rest at 10 (G26), 15 (G19X) and 25 (G34) yards with three brands of 9mm ammunition. And let me just say that these were three of the best-shooting stock Glocks I have fired in some time. All of them shot to the point of aim, producing impressive groups.

The G34 Gen5 was intended for competition shooting, so I belted on a Safariland Model 014 Open Class competition holster and ran it through the classic “El Presidente” drill. When I got the hang of the DeltaPoint’s little red dot bouncing around, I consistently put all my rounds inside the three targets’ A-zones. And thanks to G34 Gen5’s flared magazine well, my reloads were fast and fumble-free.

We then moved to the range’s steel plate rack, and I set about knocking each target down with the G19X. Earlier, I had mounted a Night Stick tactical light on the G19X, and although that extra bit of weight up front helped tame the muzzle flip, the gun’s trigger displayed a bit of new-gun stiffness. However, after I had a better measure of the trigger, I rarely used more than six rounds to knock down the half-dozen steel discs.

Last up was the G26 Gen5, which I ran through some off-hand drills on a combat target from 8 yards. I drew from a Galco Avenger belt holster. I have used a G26 for concealed carry for years, so this little Glock presented no surprises. And except for one round that mysteriously wandered out into the 7-ring, all the 9mms I sent downrange impacted inside the 9- and 10-rings.

After shooting these new pistols, I can assure you that they are accurate, utterly reliable, ergonomically pleasing and user friendly. Or, to put it in simpler terms, they’re Glocks. Plus, they come with a host of extra features. 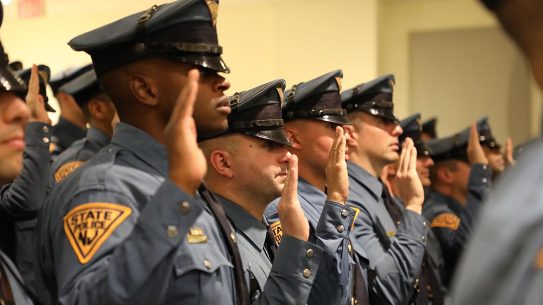